Viñales, Cuba: Why It Is A Must-Visit

Two things were certain on my trip to Cuba.

But, unlike any other regular trip, I didn’t have an idea of how to move out of Havana, and where, until I arrived in Cuba. Remember I told you how difficult it is to find reliable information about Cuba online and plan a trip like this?

As I wrote previously, I took my time to chat with my host and other locals while in Havana, and none of them hesitated in telling me the best places to visit. Viñales, Varadero, Trinidad, Cienfuegos, Santiago de Cuba, Baracoa, Cayo Coco, and many more names were thrown right in front of me as I collected verbal suggestions to arm my trip in an old fashioned way – with barely any or no internet.

Forget about buying a map in Cuba, unless you’re lucky, so I relied on a guide of Cuba my host made available for me since one of her previous couchsurfers was generous enough to donate it. The only problem was that the guide was written in Czech. But hey, at least I could get a broad idea of the things to do and see in each city based on the images!

What was essential for me was to see the map of Cuba to localize every city that was recommended to me and estimate, based on distance and activities, which ones I would be able to visit.

In my “must visit” list I had Viñales and Trinidad. In my “I’ll visit you if I have time” list, I had Santiago de Cuba, Camaguey, and Baracoa.

Once I felt ready enough to leave Havana, I went to the bus station hoping to get the next bus to Viñales. No luck with that, the bus was full. But, the good thing is that there are dozens of shared taxis parked in front of the bus station to take the spillover customers to their specific destination. And off I went.

Two hours later I was in Viñales, in front of a cute, burgundy one-story house with a small porch. This was my Casa Particular, my “home” for the next few days. My host was already waiting for me, so she welcomed me with a drink and a lot of energy to talk and share. I took both. 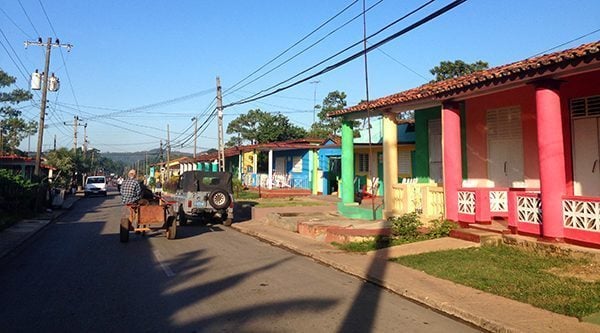 Viñales is a small countryside town west of Havana, and even though it is just two hours away, it feels like a world apart. Here, everything goes at a very slow pace. It is common to see people trotting up and down the street on their horses, but if you walk just a few hundred meters outside town, you’ll feel surrounded by farmlands.

Cigar-chewing guajiros drive their oxen and plow through the rust-colored tobacco fields, farmers tend to their current crops, and workers sit in sheds and farms, drying and rolling the famous Cuban tobaccos.

While I haven’t visited much of Cuba, I think it is safe to say that Viñales stands among the prettiest natural destinations in the whole country – especially when all the locals rave about it. Even as you approach the city, you can see from the distance the mogotes – karstic mountains that make the characteristic landscape of Viñales – and how they transform from a detail in the distance to the main natural feature all 360 degrees around you. 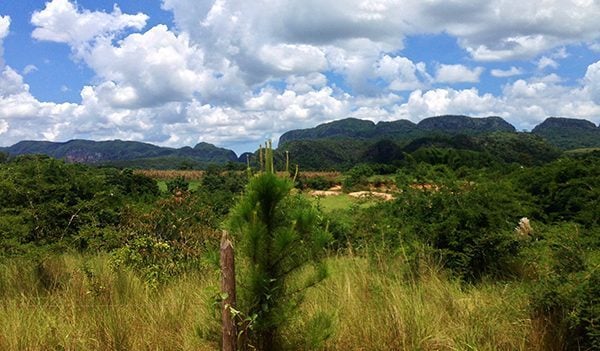 I fell in love with this place instantly, so I didn’t want to waste any minute there. Right after throwing my bags in my room, and a quick chat with my host, I arranged a horseback ride around the farms and tobacco fields.

It was not tobacco season, so what I saw was mostly corn, but I still managed to see part of the tobacco process by visiting one of the sheds where farmers were still rolling and drying some of their harvests.

Cubans are very friendly and open to having their picture taken, so I did as any other tourist would do – take pictures of the farmers smoking their cigars and other rustic sceneries. Unfortunately, my SD card got corrupted later on the trip, damaging ALL my pictures of Viñales and Trinidad.

I got so cranky and sad because I believe I got some great pictures I’ll most probably never duplicate. But, at least I have the memory of the moment, which is still more important than the pictures. But still, I wanted to show you their awesomeness!!! Anyway, a few iPhone pictures will have to do for the posts on these cities. Sigh… 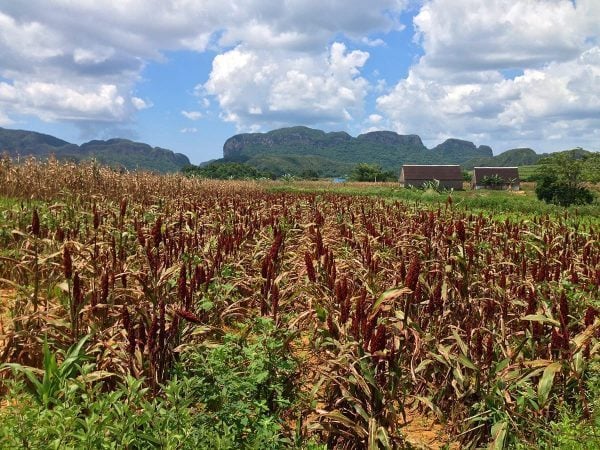 Along the horseback ride, I had the chance to dip in a lake and go in a cave. I decided to skip both since the lake was quite underwhelming (and I’m not fond of swimming in murky lake water), and the cave was just a small extra along the way, not a highlight. So, I decided to focus on what I was enjoying – the farms, the animals, the people, the mogotes.

After a couple of hours riding in the fields, I was back in town – ready to walk around and explore it. Viñales is really small, so I could walk from one corner to the other in 15 minutes.

After seeing the church, main square, couple typical houses, and main street, I made my way to the ETECSA building. I needed my daily WiFi fix.

One of the main reasons I wanted to use the WiFi was to try to contact my friends (the ones I met in Bolivia a couple of months ago) because I knew they were going to be in Cuba too, but I wasn’t sure exactly where. As I already explained in a previous post, internet in Cuba is barely existent, so all attempts to communicate with my friends had been futile so far. But I wasn’t ready to give up.

As I tried to connect to the signal, I heard a familiar female voice with a British accent coming right from behind me. But, the voice was not directed at me. I immediately turned my back, and there they were, my friends were right there trying to use the internet to contact me!

After a cheerful hello and hugs between everyone at the party, we made plans to spend our time together in Viñales and play the rest by ear.

A common thing Casas Particulares do is prepare meals for you if you wish to buy them. We all grouped at my friend’s Casa Particular, sat on a big table, and chatted there for hours while having dinner – catching up on our latest experiences and also interacting with the host to learn a bit more about Viñales.

One thing is certain about Cubans; they are very proud of where they live and never shy away from giving you tips or interesting stories about their life there.

As expected of a small town, the nightlife is not much to be desired, but, don’t miss the cultural shows at the Polo Montañez Cultural Center right next to the church and main square.

The night was full of Cuban salsa, small dance numbers, ballad singers, and a funky dancing crowd (especially after a few drinks). It’s nothing fancy, but it is a cool place to relax at night in a town that is already over-relaxed.

The next day was spent visiting some more tobacco farms and the famous “Cueva del Indio” – Indian Cave. Some people rave about it, and yes, it is a nice cave, but if it weren’t because I was there with my friends (joking the whole time), I would have felt like the cave was just ok.

In retrospect, I think I would have preferred to go biking in nature to see more of the mogotes, which apparently many people do and say is very nice. That’s a tip for you!

To close this with some thoughts… If Havana felt authentic to me, Viñales gave me the condensed version of that feeling. This small town excels in steering away from the artificial development that often comes with tourism and keeps its roots in what really made it the idyllic place it is today – its farms, people, culture, and tobacco. 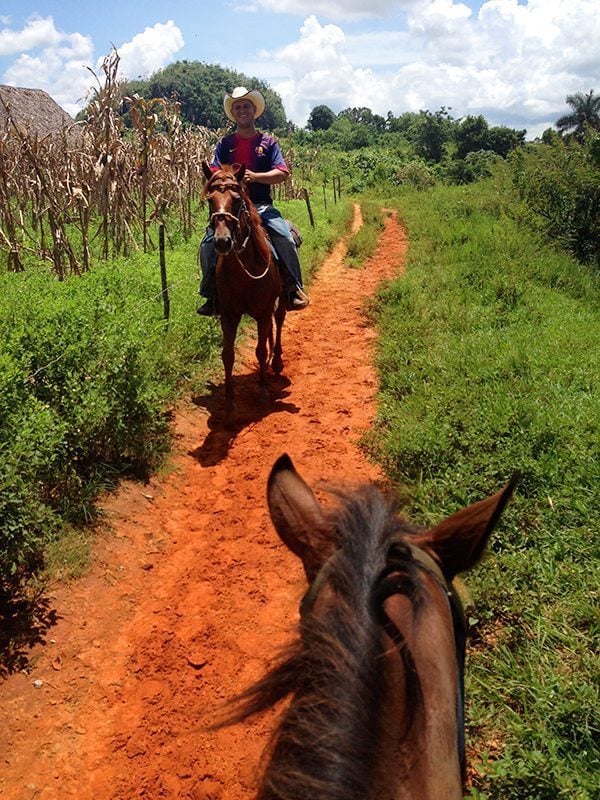 I loved the fact that I could have a one-on-one horseback ride with an actual farmer and not a tour guide, that the tobacco rolling happens in someone’s house or back shed instead of a factory, and that the chocolate is still made by hand and organic and not with artificial ingredients. That and much more makes Viñales a place that is easy to adore.

But, as I’m told, Cuba has many other places that are easy to adore, and Trinidad is next on my list…

15 thoughts on “Viñales, Cuba: Why It Is A Must-Visit”