I travel solo most of the time, which has its ups and downs, but I think in Havana, me being solo was a major influence on how my days there evolved.

There’s also a chance that me being Puertorrican played a role too since after all, Cubans and Puerto Ricans see each other as cultural brothers.

As per usual, I like to walk around cities, and Havana was no exception – even with its unbearably hot temperatures and high humidity that made me sweat every step of the way.

One of my missions in Cuba was to film more videos, so, before traveling there I bought a handheld stabilizer (like this one) to shot better, more stable videos. Easy, no? During my first day walking the city, I decided to play with my new toy. I walked several streets in Central and Old Havana trying to get decent shots, or so I thought.

Unfortunately, one must learn to balance a camera on the stabilizer properly, and I failed to do that after a few attempts. All my videos came out wobbly and unfocused. Once I realized my fail, I sat down at the side of the road to let my frustration pass before moving on.

After a few minutes there, a man passed by and asked for a lighter. I don’t smoke, so I simply said no. Right after asking he saw that weird apparatus holding my camera and asked me about it, to which I replied positively. He immediately sat down next to me and we continued talking.

At first, I was suspicious of his intentions. After traveling extensively, I’ve already experienced all kinds of scams, and he seemed like he was onto something. Let’s say he sort of was.

His name was Alex, and apparently he had nothing to do that day, so he offered to show me around for a tip. At least he was honest about it from the beginning.

I didn’t want to since I wanted to focus on my filming, and I knew I wouldn’t be able to do it with him around. But, after a few minutes of chatting, I decided to give it a try and stated from the beginning that I would only give about $5 at the end of it all. Alex accepted, and I dismissed my filming plans. 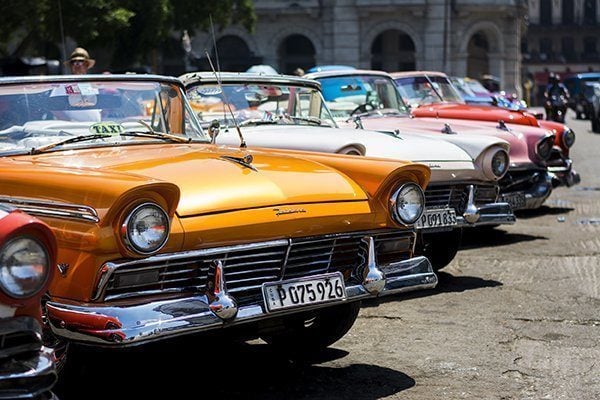 At first, it all went like the typical tour in Havana, seeing the major sights like the Capitol Building, the vintage cars, the famous Calle Obispo, and El Floridita (where Ernest Hemingway used to frequent for his daiquiris), among other sights in the area.

He also took me to the heart of Old Havana where I saw the Plaza de Armas and the Palacio de Los Capitanes, followed by the Royal Force Castle, which is the oldest stone fortification in the Americas, and more.

In fact, Old Havana has so many interesting places to visit, that at every corner I looked I found myself curious about “that one place”, or interested in reading about “that other site”, and so on.

Alex did a pretty good job explaining things, but more than explaining about the cathedral, and the palace, and the fortress; I wanted him to explain “his Cuba” to me. After we had finished walking around, we sat in a café and talked about life in Cuba. (I wrote partially about this in my previous post.)

He went on to explain how he’s worked guiding tourists as a side gig, how he sells apartments “under the table,” and his experience in a Cuban prison, which did not sound easy or pleasant at all.

He manages to survive by finding anything, and everything, as an odd job on the street, but he knows that in tourism, is where the money is right now.

By Cuban standards, Alex lives “ok.” He’s able to pay for his youngest son’s daycare (which is $10 a month), he can buy extra food for the family, and even eat outside every once in a while.

After some more talking he said, “Well, today is my mom’s birthday, and I should go to meet the family for dinner. Do you want to come?”

Once we reached his mom’s house, which, in fact, is where all the family lives, I met Alex’s mom and his immediate and extended family. In the living room, they were listening to an American R&B concert, played via DVD on a TV that could easily be from the 90s.

The welcome drink choices were rum, vodka, and Tukola (Cuban Coca-Cola). I started with vodka.

Even though I was not part of their family, they welcomed me with open arms and marveled at the idea of having a Puertorrican at their house, which apparently was a first.

We speak Spanish with different accents, but Habaneros and Puerto Ricans have the same bad custom of changing the Rs for Ls in most words, so it all felt like locals talking about any random stuff we could come up with.

Alex then showed me around the house. It was small and had only one bedroom. There was another bed in the living room that also served as a couch during the day. The bathroom had no shower, and the kitchen was barely wide enough to fit two people at the same time.

Even though Alex’s mom was the “birthday girl,” she demanded to be in charge of cooking. Since I was a guest, I was served first. I felt both welcomed and ashamed at the same time.

Here I have a family, sharing what little food is rationed to them with me, and making sure I was well fed (when in some cases they aren’t). The food was simple, but it was good by Cuban standards.

Many Cubans have to manage their culinary talents with low resources, so food is often under-seasoned or of bad quality. Thankfully, this meal was neither.

I offered to buy some Tukola and beer to help, which barely cost me $2.

While sitting there chatting, I saw a few small statues by the entrance. I asked Alex about them, and he said they were his mom’s protectors. He had his protectors in his room too. They practice Santeria, and I found that very curious.

Even though Roman Catholicism is the main religion in Cuba, Santeria is considered to be very popular among many. Santería developed out of the traditions of the Yoruba, one of the African peoples who were imported to Cuba during the 16th through 19th centuries to work on the sugar plantations.

Santería blends elements of Christianity and West African beliefs and as such made it possible for the slaves to retain their traditional beliefs while appearing to practice Catholicism. 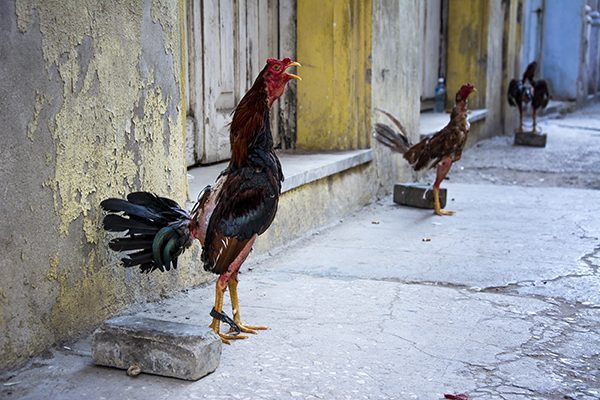 Santeria can be easily seen on the streets. People initiating into the religion wear all white from head to toe for three months or longer while others simply wear amulets in the form of bracelets, chains, or others.

After getting a brief introduction to what Santeria is, Alex told me his godfather is a Babalawo, which means ‘father of the mysteries’ (in the Yoruba language) or Priest of Ifá. In other words, he is an important person in Santeria. He made the offer to pay a visit to him to get a “Cadenazo,” or brief reading. I accepted.

During my travels I’ve participated in all sorts of religious practices, from Buddhist to Islamic, to Hinduism, to Christian; so Santeria would not be an exception – even with its bad reputation of “negative” powers. I’m open to experiencing things firsthand.

Alex’s godfather’s place was even more humble. We sat on a small table in the living room, and there he performed the Cadenazo. It proceeded with him throwing a chain with what seemed like eight pieces of fruit shells.

This process was repeated several times until he had a full read on me. While I won’t share the specifics of the reading, I can say that it surprised me more than I expected. Whatever any saint, god, or whoever told him, it identified quite accurately with me.

After that, I walked home and went on with life like any other day, but feeling like I made some friends in Havana.

I’m happy I got to experience so much and got to see a glimpse of the real Cuban life, including some of the strange and surreal aspects of its religions, social aspects, and politics.

This, to me, was more interesting than seeing buildings and shooting my video. And maybe, this is one of the best perks of traveling alone – easier access to locals.