Best Things to Do in Havana, Cuba | 15 Exciting Activities in La Habana 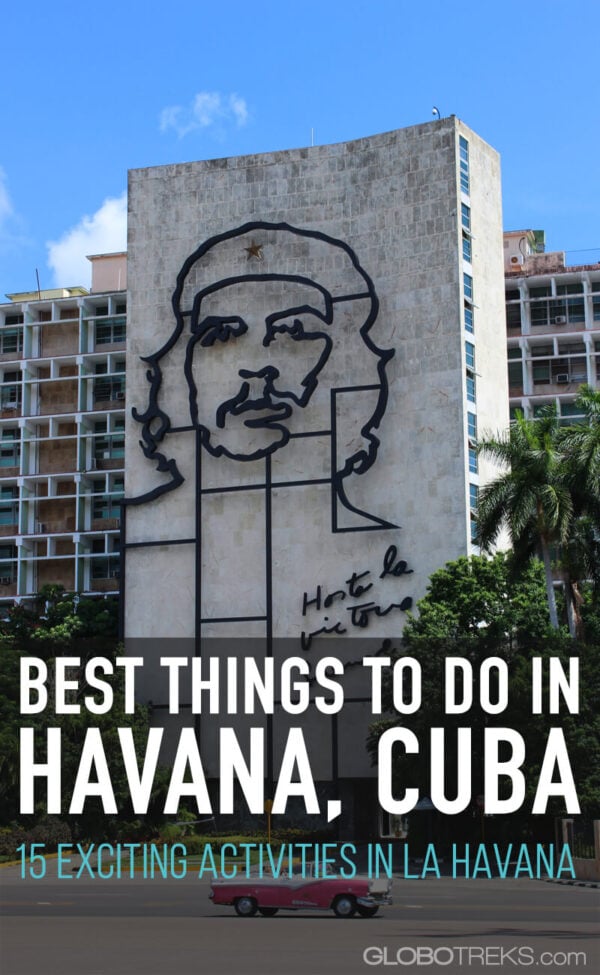 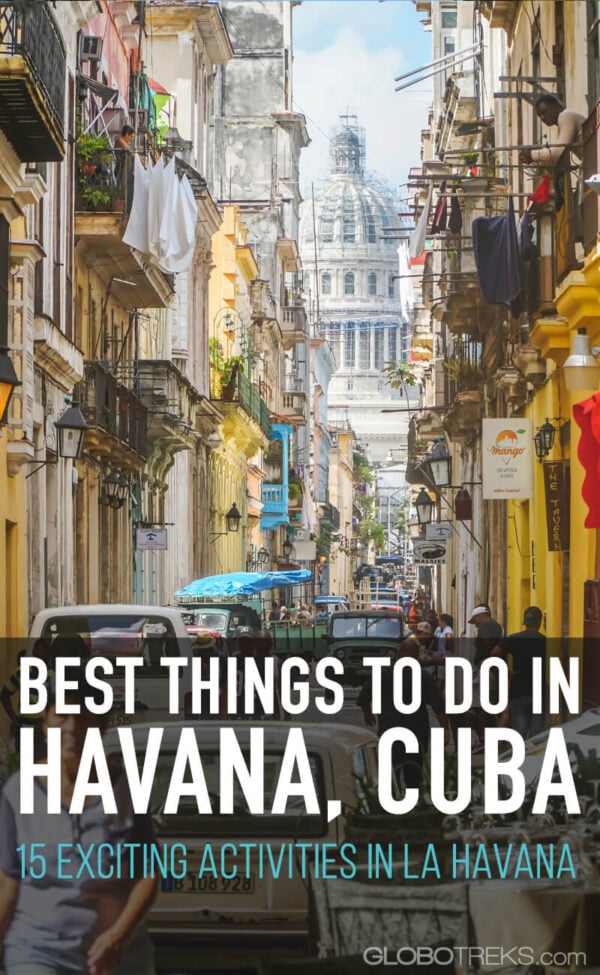 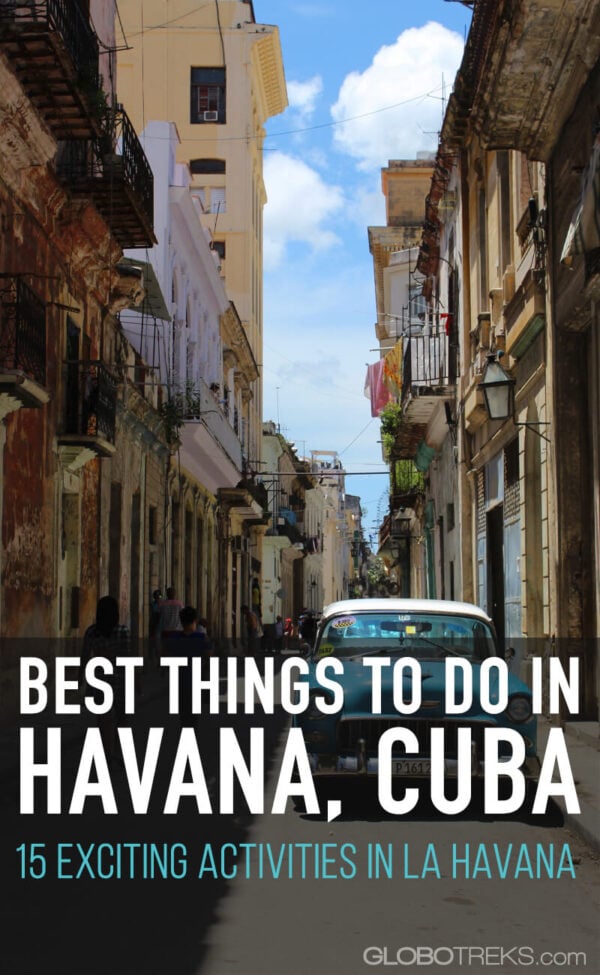 After decades of being closed from parts of the world, La Habana, Cuba, holds a mystery for many tourists who are now flooding its streets.

Havana and history go hand in hand. As one of the best-preserved colonial cities in Latin America, it’s jam-packed with colorful buildings, ancient forts, hidden alleyways, and opulent palaces.

Whether it’s a sultry salsa performance or uncovering the fascinating history of Cuba’s capital, Havana is a city made for walking.

Listen to live rumba floating through the air, savor moments where Hemingway once dined, and explore Old Havana’s cobbled streets.

If you’re traveling to Cuba, you’ll undoubtedly want to make a stop at the capital city. You’ll find an array of unique activities in Havana, Cuba that you won’t want to miss. 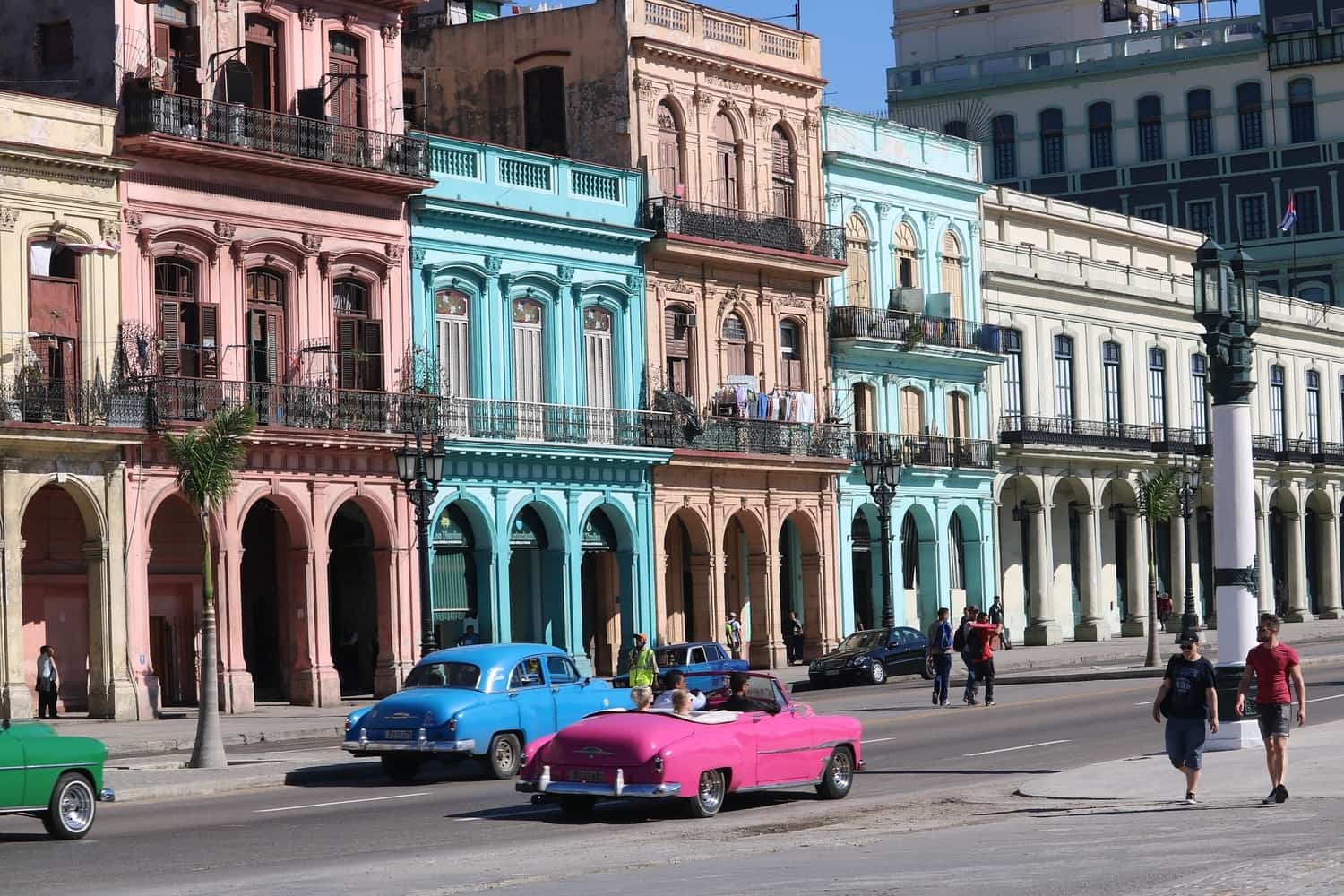 The city offers endless opportunities to explore nooks and crannies and uncover new cultural experiences during your Havana trip. Let’s take a look at the best things to do in Havana.

As Cuban cliché goes, the first thing you should do is drive one of the old, vintage cars in Cuba. As a result of their long-standing communist government, the inability to import new cars resulted in cars still being used from the 1950s.

You can pick one up outside the Museum of the Revolution or Hotel Inglaterra. So, why not take a tour back in history and spend time being driven around the city in one of the classical cars? 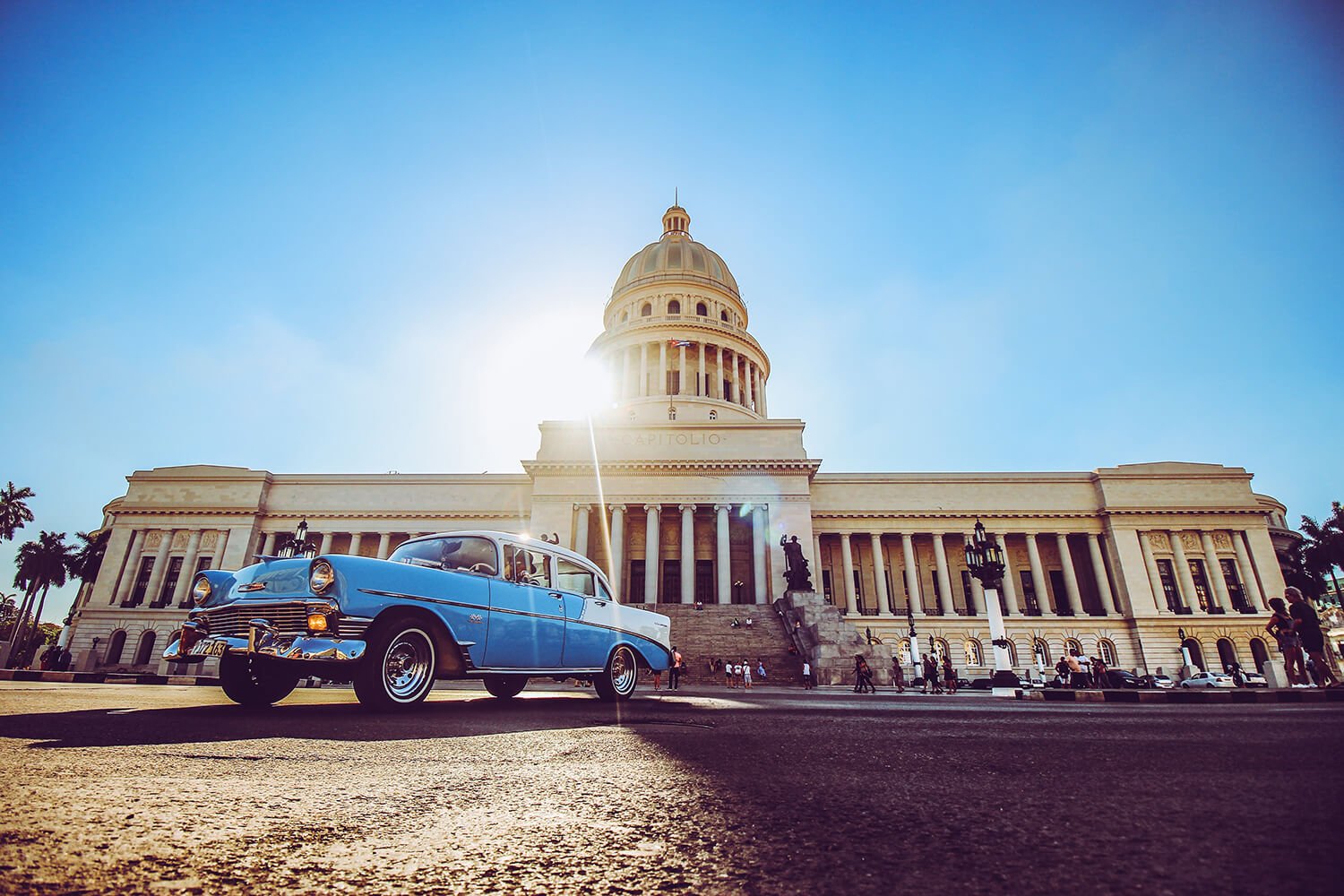 Centro Habana, or Central Havana, is one of the most colorful districts nestled west of Old Havana. It boasts wide boulevards and beautifully restored buildings. 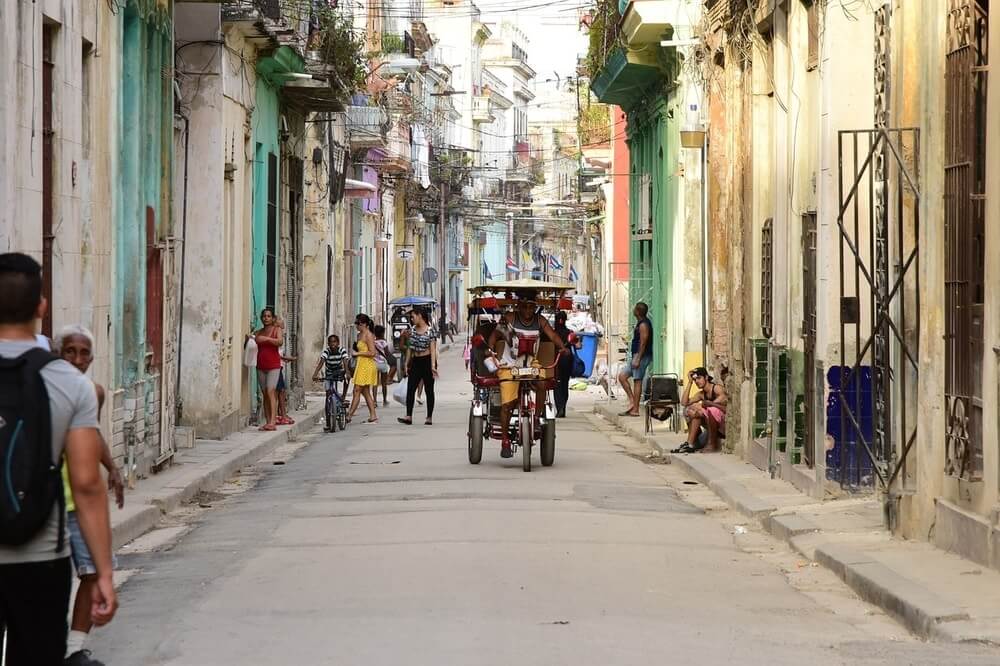 Another element of Cuban culture – one of the most sought-after Havana things to do – is to learn the hot salsa dance. Music is practically floating through the air throughout the city.

Learn to dance to Latin grooves while in Cuba. Light up the dance floor, burn off those extra mojitos, and spice up your mood. You can join a private lesson before taking your talents to the streets, or head to one of Havana’s dance clubs like El Turquino. 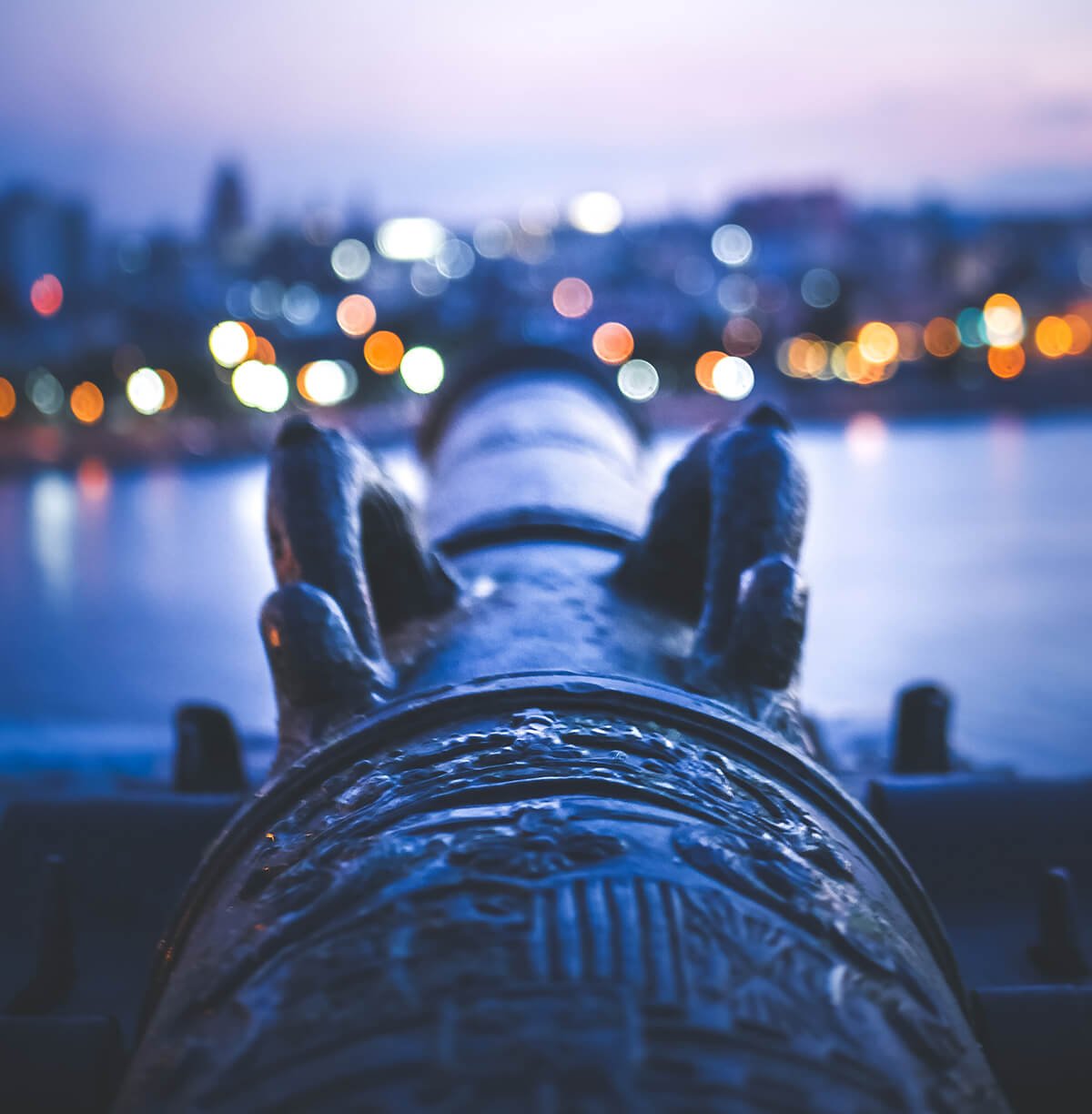 The castle was built during the 1590s to safeguard Havana against military attacks and pirates.

5. Stroll Along the Malecón 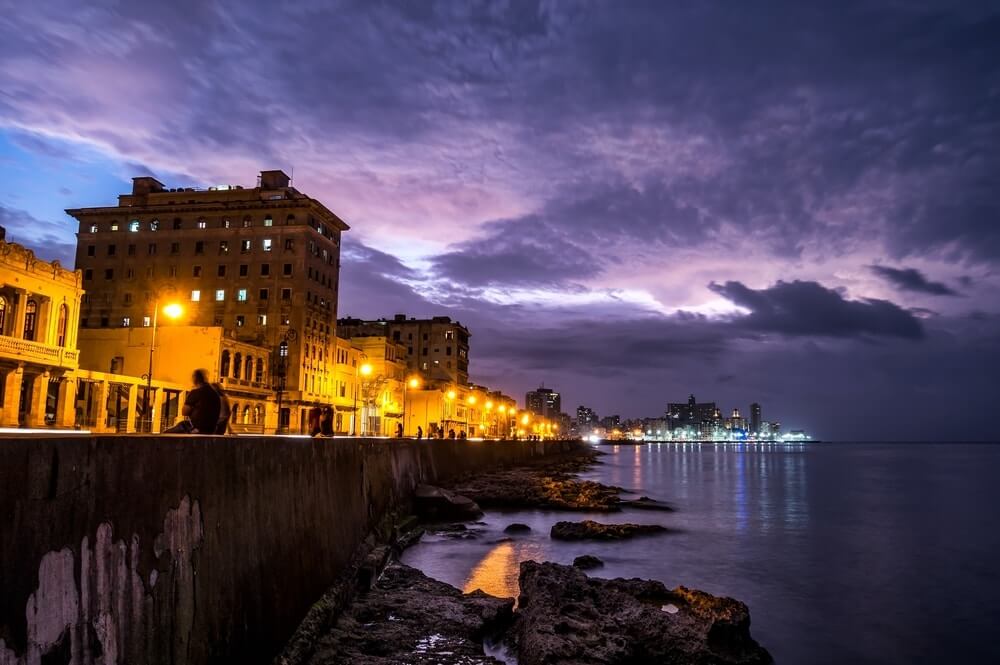 Get an intimate glimpse of bustling Havana life as you walk along the scenic El Malecon or Malecón. It’s a restored 5-mile long seafront boulevard that hugs Havana’s north coastline.

It provides picturesque views of Havana’s colorful collection of 20th-century buildings. A mix of architectural styles from Neo Moorish to Art Deco.

The boardwalk sits on the edge of Old Havana, Cuba, and the Vedado neighborhood, providing plenty of different restaurants and shops to dip into.

Enjoy strolling and sampling a variety of foods and listening to music along the pier. A perfect time to go is at sunset. Grab a box of rum along the road and stop over to admire the beauty this city has to offer. 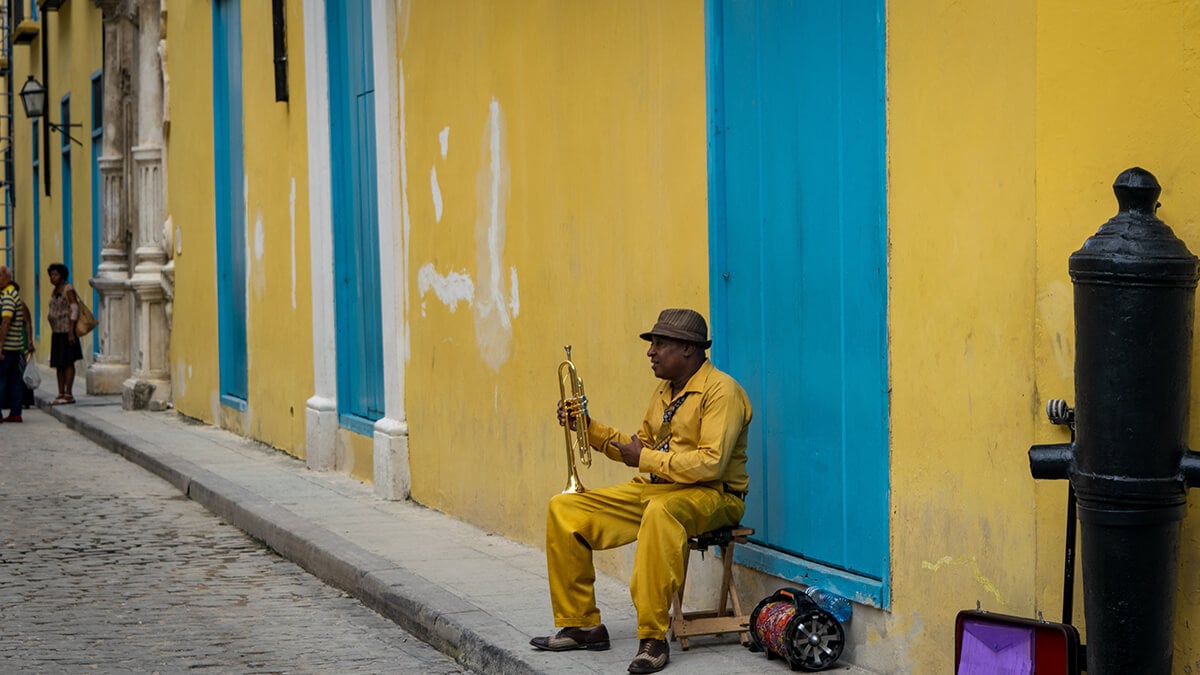 What to see in Havana, Cuba? Old Havana or Havana Vieja, for one, is a place you’ll undoubtedly want to discover, and by foot is the best way. It’s quite possibly the most beautiful area in the city.

In the early 1980s, Old Havana was declared a UNESCO World Heritage Site thanks to its impressive preservation of centuries-old architecture.

Walking through Old Havana, you’ll see an expanse of the colorful labyrinth of streets. Filled with forts, monuments, and churches with baroque and neoclassical designs, throughout the bustling neighborhoods.

Take a walking tour of Old Havana to experience what makes up the pulsating heart of Havana.

After soaking in the phenomenal history in Habana Vieja, climb the 11 foot (35-meter) Plaza Vieja tower and peer through the Camera Oscura.

8. Take a Tour in a Cigar Factory 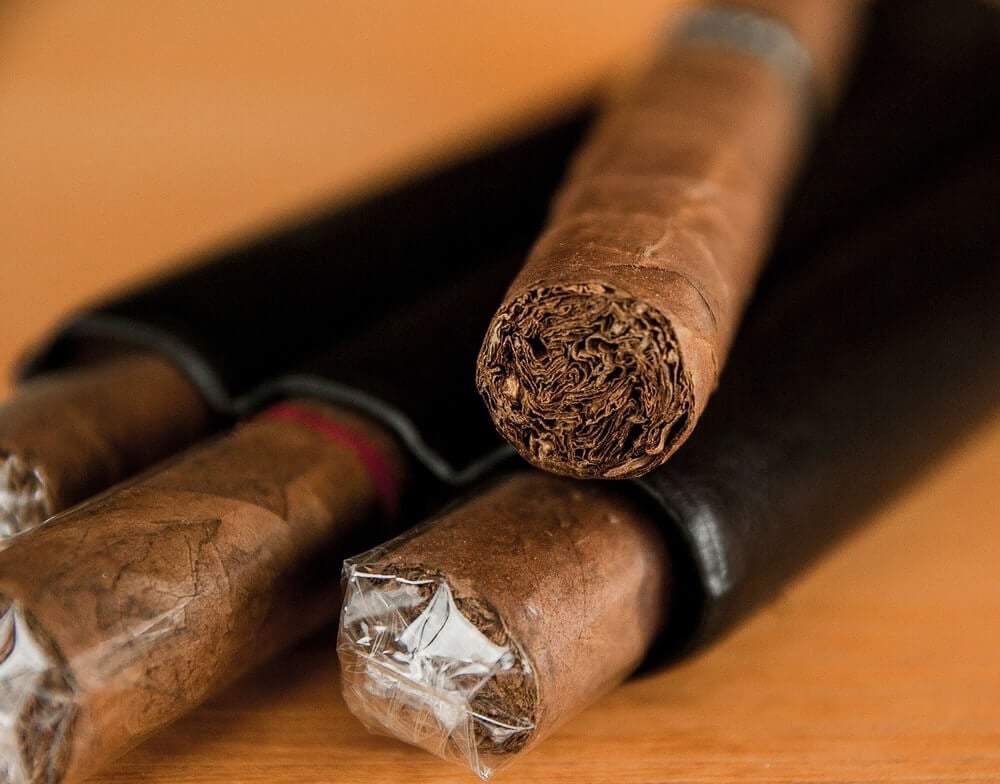 What better place to get legendary Cuban cigars than at one of Cuba’s cigar factories. Even if you’re not one to take a puff, seeing the process in action is a great way to connect with the country’s culture.

There are a few options where you can get this experience, such as at Modern Partagas, the Romeo Y Julieta Cigar Factory, and more.

9. Dance the Night Away at the Cabaret Tropicana Show

The Cabaret Tropicana Show is one of the hottest nightclub shows in Cuba. It’s recognized for its tropical open-air venue, which bursts with glitter, glam, and colorful lights.

Groove the night away as you watch performers in their feathered costumes dance to sensual salsa under the stars. 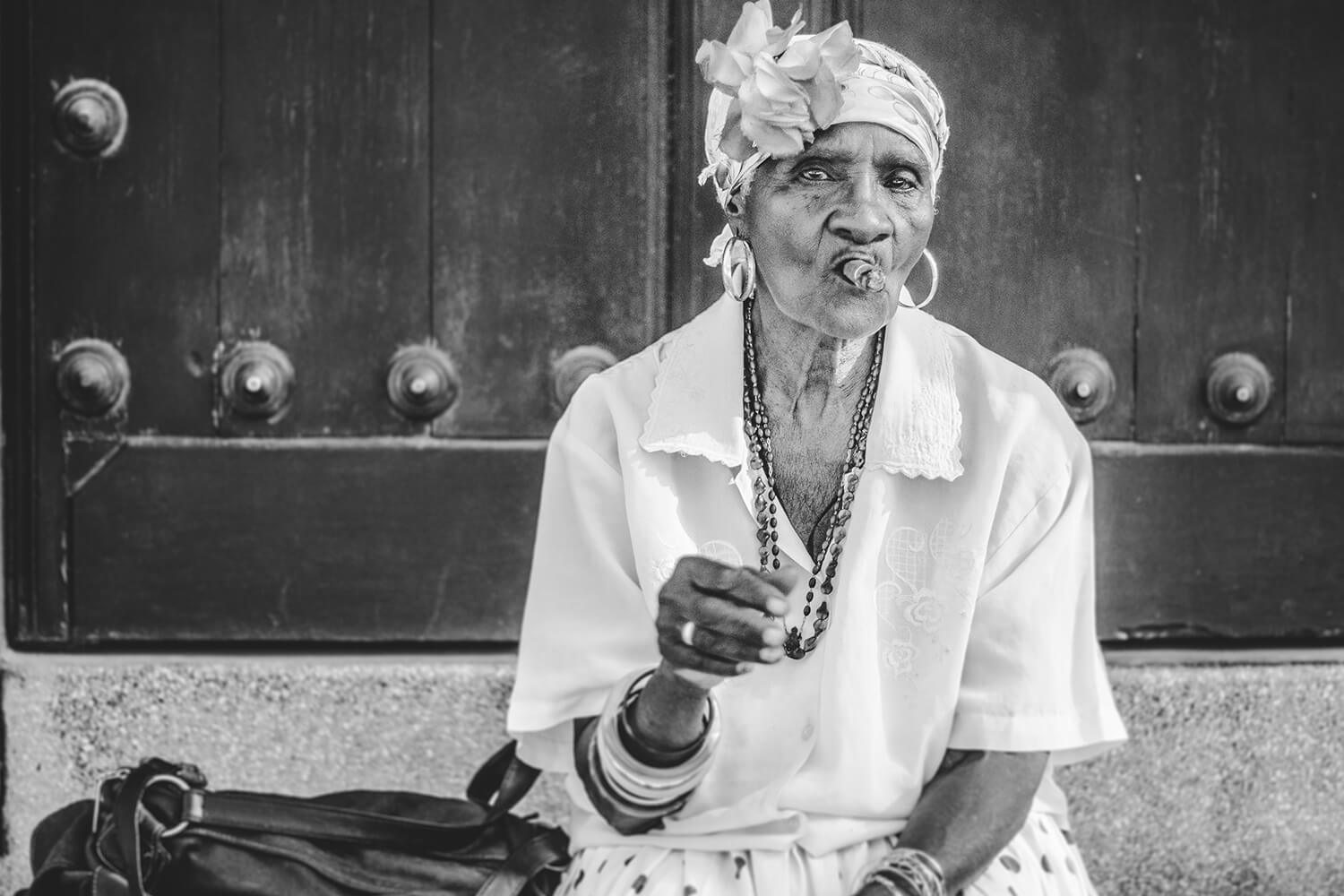 If you ever find yourself looking to experience Havana a little further out of the bustling city, take a road trip to the small town of Viñales, Cuba. It’s a charming village tucked away in lush greenery and surrounded by tobacco plantations.

Viñales is renowned for its tobacco farms and limestone hills. Apart from exploring the incredible plantations on foot, take a horse ride and enjoy the country atmosphere.

Ernest Hemingway lived just outside Havana for twenty years, and naturally, got a lot of his inspiration for his novels from the city – specifically speaking, from bars. 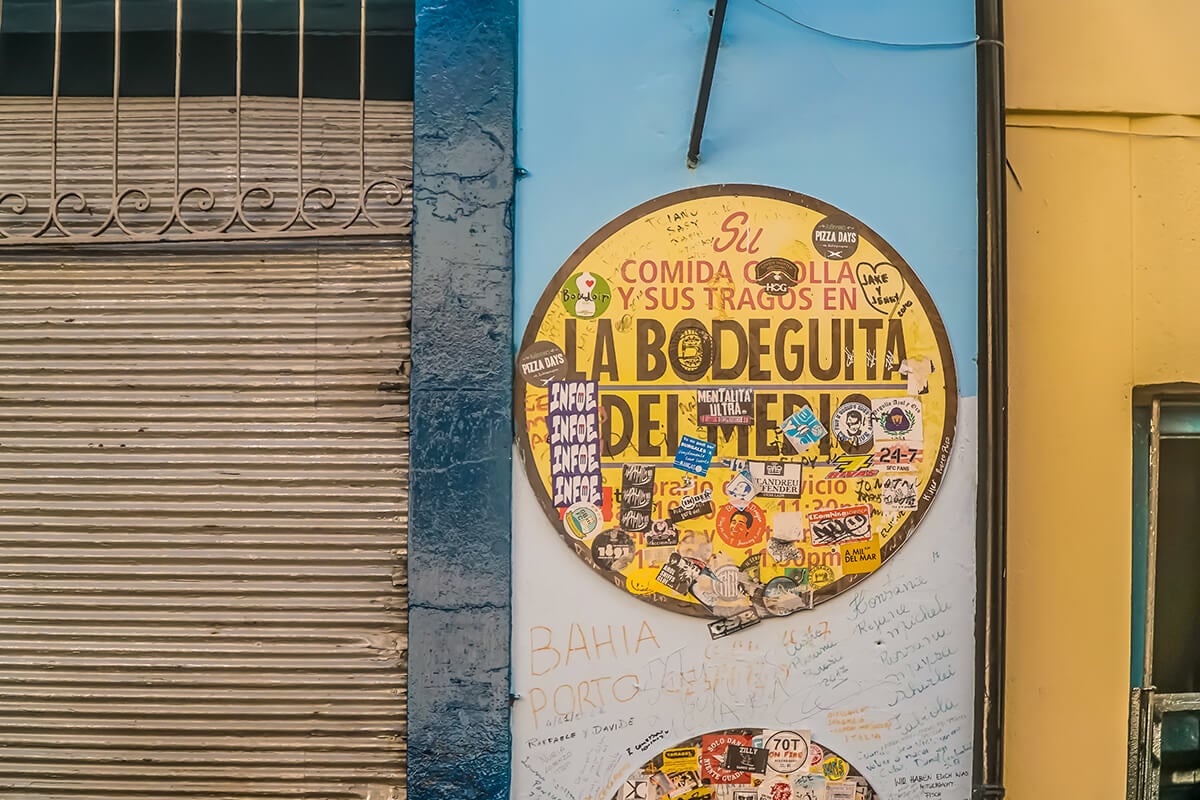 12. Stop Over at Hemingway’s Old House

While you’re on the Hemingway hunt, why not take it a step further and stop by his old home?

The former colonial home, Finca Vigia, of Ernest Hemingway, is where he wrote some of his most famous novels, such as The Old Man and the Sea, A Moveable Feast, and For Whom The Bell Tolls.

Today, visitors can learn more about the famous author and his relationship with Cuba at the Ernest Hemingway Museum.

Note: You’ll not be allowed inside the house, but the place can be viewed through large windows – with plenty to see.

Get your camera ready to see Cuba’s rich artistic traditions shine through in Fusterlandia. The mosaic decorated village is a whimsical wonderland nestled in Jaimanitas, 30-minutes west of central Havana.

Fusterlandia is not site-specific but instead crafted in and around the neighborhood. Created by local artist José Fuster, you’ll find the area draped in a display of kaleidoscopic colors.

Residents allowed the artist to decorate their homes in colorful, eye-catching gems creating a beautiful space.

There is a gallery dedicated to these artistic efforts, open between 9.30 am to 4.00 pm, Wednesday to Sunday. If you don’t make it in time, you can drive through the neighborhood to see first hand. 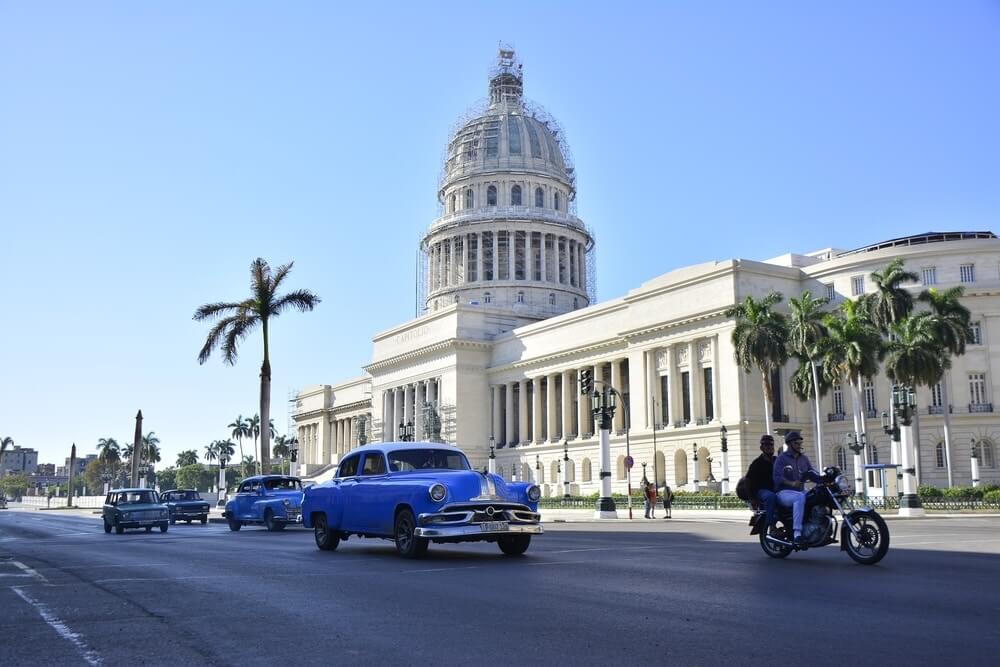 El Capitolio, or Cuba’s National Capital Building, is one of the most visited sites in the capital of Cuba.

The neoclassical building was built in 1929 in Havana’s center until it underwent restoration for the last eight years. And just recently, it reopened as the seat of Cuba’s National Assembly.

The Cuban building’s dome is designed to suit the country’s tropical weather. Visitors are allowed to tour the El Capitol in groups of 15 every week, from Tuesday to Sunday.

Playas del Este is a short drive east of the city. It’s a long stretch of palm-fringed beach, blanketed in white-sands and gem-colored waters. On the beach, sightseers can find various restaurants, hotels, and other regular tourist facilities.

There is an assortment of different beaches at Playas del Este. One of the best stretches of beach – and hot tourist spots –  is at Santa Maria del Mar. This beach is lined with lounge chairs and colorful umbrellas.

Other sections, more popular amongst the locals, are at Playa Guanabo and Playa Boca Ciega.

It’s a great alternative for travelers who cannot visit the more remote areas in Cuba.

A Footnote: What to Do in Havana, Cuba?

A city steeped in incredible history, there’s plenty of fun things to do in Havana, Cuba. A place with few smartphones and limited internet access. Colorful vintage cars roll down picturesque streets.

The culture-rich Caribbean city is a treasure trove with unique hidden gems waiting to be explored. So, get your camera set, smear on some sunscreen, and find a place to stay for an adventure in Havana.

Essential Info: Logistical Tips and Tricks to Book your Trip to Havana

Book Your Flight
Find a cheap flight by using Skyscanner or Kayak. These are two of the sites I use the most due to their exhaustive search on several websites and airlines around the world. They usually bring the cheapest fares.

Book Your Accommodation
If you’re looking to save money by staying at a hostel, HostelWorld has the largest inventory of hostels. On the other hand, Airbnb offers a wide variety of rooms and apartments at affordable prices. (Get $40 off your first Airbnb booking with this link.)

Don’t Forget Your Travel Insurance
Travel insurance with comprehensive coverage will protect you against unexpected events like theft, cancellations, injury, and illness. I use World Nomads and highly recommend it.

Need a tour?
Lastly, if you’re looking for the best day-tours and cheapest ticket entrances to local attractions, I recommend checking Viator, as they have the largest selection of attractions, passes, and activities all around the world.

Other Travel and Money-Saving Tips?
Check out my resource page for some of the best products and companies to use for your trip. If you like saving money (like I do!), then this page will help. 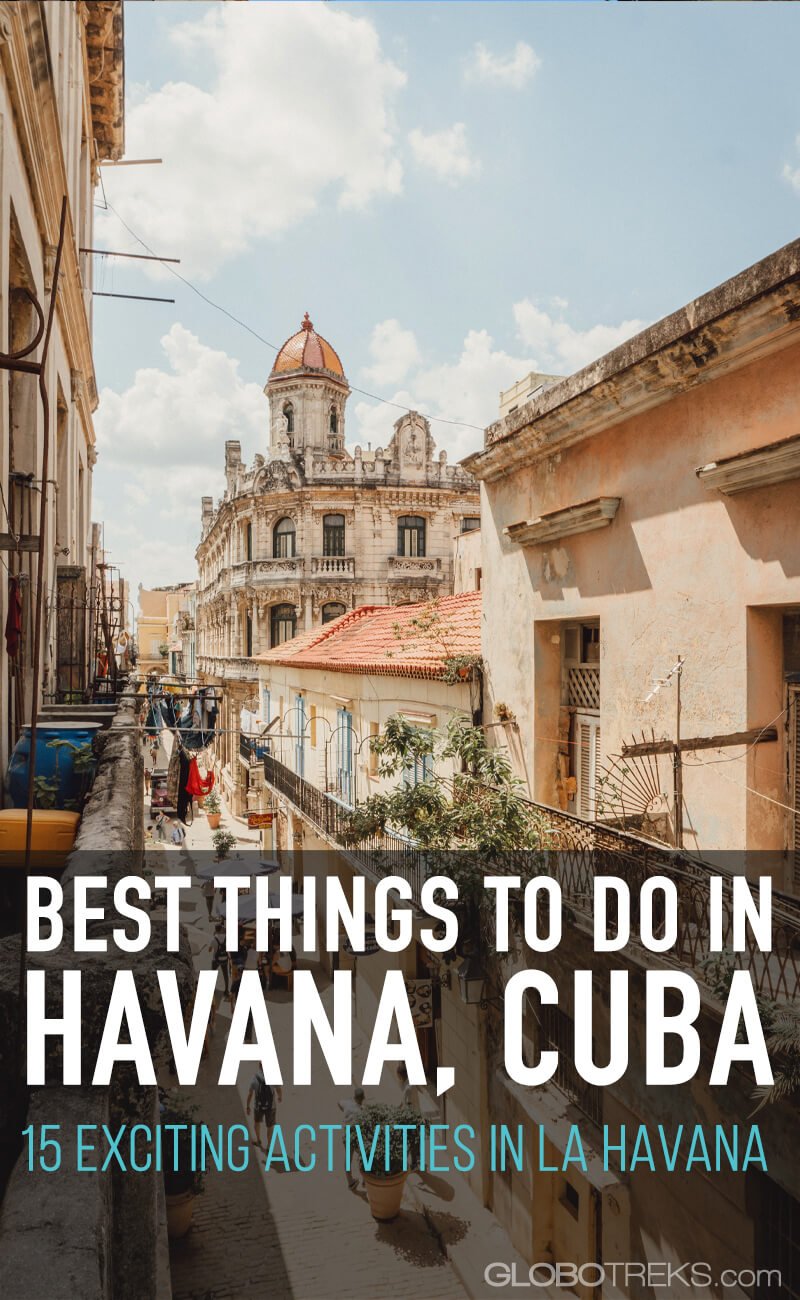