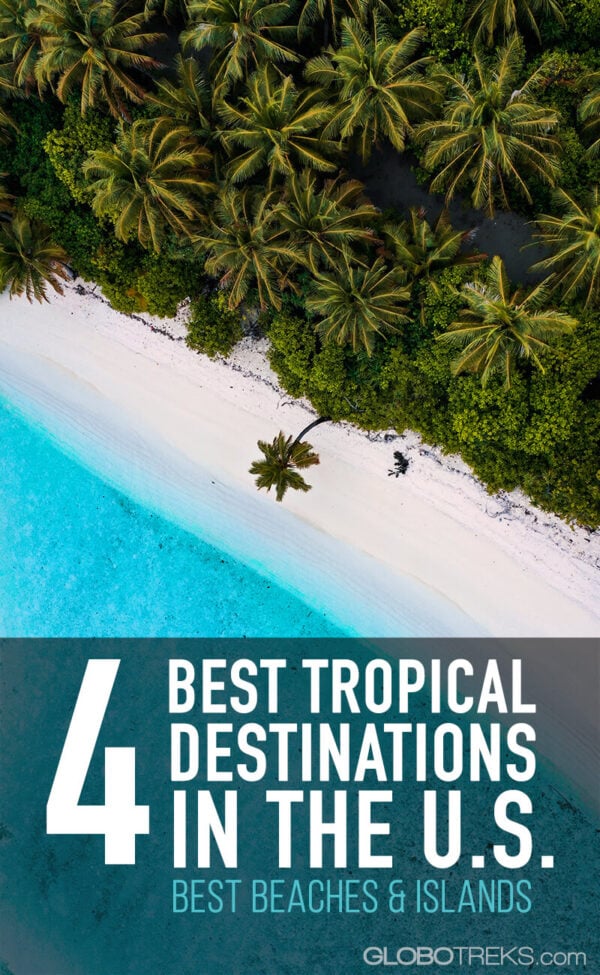 The United States might not be the first country you think of when you plan on visiting a tropical destination, but the U.S. landscape is quite vast. It’s the third-largest country in the world and has various climates throughout.

One of the essential things to know before traveling around the USA is not to forget to visit the tropical islands. Many islands in U.S. territory are accompanied by hundreds of smaller islands and cays.

Visiting so many islands and mini islands can make you feel in over your head, but the hard work has been done for you. These four tropical destinations in the U.S. are the best places to visit.

Most Tropical Places In The U.S.

Dreamy beaches and lush landscapes are the dream for many people, but they don’t always have the time or money to travel very far. If you’re a U.S. citizen, these tropical places in the U.S will put you in an island mood without taking out your passport.

Regarding tropical destinations, Hawaii is at the top of many lists. It’s only fitting that it’s the first place we look at for tropical U.S. destinations.

Hawaii is an island well known for its bright blue waters, pineapples, and hula dances, but there is a Hawaii beyond the stereotypes.

Altogether, the state has 137 islands and eight main islands. Maui, Oahu, and Kauai are the most well-known islands.

The aloha spirit and island lifestyle are alive and well in Valley Isle. The whaling town of Lahaina, mentioned in Herman Melville’s novel Moby Dick, is a popular stop on many tourists’ itineraries.

Oahu is the third biggest Hawaiian island. It is nicknamed the ‘Gathering Place’ because it is where most people live and most tourists visit. Its capital, Honolulu, and Waikiki Beach are known worldwide.

The island has many water activities, including shark diving. There are also many things to do on land, including visiting some of Hawaii’s most important historical landmarks.

Kauai is also known as the ‘Garden Isle’ because of its lush landscapes and greenery. 97% of the island is blanketed by mountains and forest ranges.

The U.S. Virgin Islands are in the Caribbean, just off the coast of Florida. The best time to visit the islands is April to June, when there is mild weather and rainfall. Temperatures average around 88°F around this time.

Nature lovers and hikers will love visiting St. John. It is home to the Virgin Islands National Park, which has several hiking trails and nature reserves. If you visit St. John, you will likely stay in Cruz Bay and Coral Bay.

Both locations have amazing beaches and a variety of water activities. Cruz Bay is more lively, and Coral Bay is ideal for visitors who want fewer crowds.

St Croix is the biggest of the four main U.S. Virgin Islands. The island has many hiking trails, beaches, and water activities suitable for beginners and advanced folk.

The nightlife and bars on the island are lively. It’s also the only place in the Virgin Islands with a casino.

There are only 200 residents on the island, so this is a great place away from big crowds.

St. Thomas is known as ‘Rock City’ because of its mountainous terrain. Its highest point is 1,550ft tall. The island is an excellent location for a tropical vacation in the U.S. for people who enjoy water activities and beaches.

Puerto Rico is another tropical U.S. territory in the Caribbean Sea. The best time to visit is from April to June. This is right before the rainy summer season (and hurricane season) and just after the busy winter season.

During these months, temperatures average from 74.5°F to 87°F. June is one of the hottest months of the year, but it is a great time to catch a few festivals.

This Caribbean island’s capital, San Juan, has one of the busiest nightlife scenes and beautiful beaches. If you’re worried about safety, then have no fear.

San Juan is a very safe place to travel to. Isle Verde and Condado are exceptionally safe areas to visit and stay in San Juan. Don’t forget to visit the colorful cobblestone streets of Old San Juan while you’re there to take a step back in time.

Culebra is the perfect place for beach lovers to take tropical vacations in the U.S. The island is very laid-back, with residents adopting the same quality.

Culebra has no big hotels, fast-food restaurants, or rush hours. There isn’t much to do on the island ‘after-hours’ besides relaxing on the beach and enjoying the waves.

Vieques is Culebra’s sister island, and while slightly bigger and slightly more developed, it still keeps its charms of an almost remote island in the Caribbean.

Given its trialed history with the U.S. Navy occupation on the island for decades until the early 2000s, most of Vieques is still virgin and pristine, including its many stunning beaches that often appear as some of the top beaches in the world.

Florida’s climate is subtropical, with sunny and humid summers. It’s one of the few tropical states in the U.S. The state’s rainy season is from May to October, with high humidity and thunderstorms daily.

The best time to visit the sunshine state is during Spring or Fall when temperatures aren’t too hot and humid yet. The best tropical places for travelers to enjoy in Florida are Key West and Miami.

Miami is a popular tropical city in the U.S. among tourists and locals alike. The sunshine is never-ending, and so are the parties. South Beach is one of the most popular party destinations in the world.

Watersports are also very popular here, and you can find many water activities in the city like this speedboat sightseeing tour.

Besides the party lifestyle and beaches, Miami also has a lot of cultural and artistic landmarks to visit. There is something for everyone in Miami.

Key West is just off of the coast of Cuba and will have you forgetting you’re in the United States at all.

It’s characterized by pastel architecture and charming conch houses. Duval Street is where the nightlife is bustling, and the parties never end.

The party street has had many famous visitors over the years, including Ernest Hemingway. If the bar scene isn’t your cup of tea, the island city has terrific beaches for water sport activities to keep you occupied.

Why Visit Tropical Places in the U.S.

When you think of tropical vacation locations besides Hawaii, the U.S. doesn’t necessarily pop up in your head.

You’ll often think of countries like Thailand and its tropical islands, Seychelles and its crystalline waters, or Fiji’s stunning beaches. However, there are many tropical places to travel to in the U.S.

Many people visit tropical areas to get away from everyday stress. Whether you’re a U.S. local or a tourist, the tropical areas in the U.S. will definitely have you feeling stress-free. Here’s why you should visit them.

Snorkeling, jet skiing, and kayaking are all common water activities people do on their island holidays. Places like Florida and Hawaii are well-known for their various water exercises.

The best part about visiting the beach is the fresh seafood. It will usually be cheaper at tropical destinations too because they don’t have to transport it very far.

The number one reason people visit tropical destinations is for the sunny weather. You can’t enjoy fun water activities without the heat of the sweltering sun.

America is a melting pot of cultures. The state officially recognizes six ethnic groups: Pacific Islander, Asian, Native Hawaiian, African-American, Native American, and White. However, there are so many more rich histories and cultures in this country.

Tropical Places To Visit in the U.S.

There aren’t as many tropical locations in the U.S. as, say, Seychelles, but that shouldn’t stop you from living out your island dreams.

If you’re traveling within the United States as a U.S. citizen, these places are excellent little escapes from the bustling big cities without the need for a passport.

If you’re traveling to the USA and are looking for some exciting places to add to your itinerary, these are great places to explore.

Book a trip to these enticing beaches and lush landscapes for your next holiday escape.