Did you know that Thai people have four meals a day? That every Thai male is expected to become a monk for a short period in his life? And that the world’s biggest Chinatown is located in Bangkok? These are just some facts that make Thailand an interesting and entertaining destination.

It’s no surprise that Thailand is one of the most visited countries by backpackers and independent travelers. Everything from the stunning beaches on the Southern Islands and beautiful landscapes on the North, to the rich culture found all throughout the country, lures you into experimenting what this country has to offer.

Oh, and let’s not forget the never-ending wild parties. But as in any other city, there are some facts you would like to know before going there to help you understand things, adhere more easily, or just avoid if possible.  So, here are the things I wish I knew before going to Thailand…

1. The Head Is Sacred

The head is considered the most sacred part of the body and the feet the least. Never touch anyone in the head and never point at anything with your feet. Both acts are considered disrespectful.

Also, try doing everything, including any type of interaction with a local, with your right hand (i.e. paying for your food, handing something, waving, etc.).

Using the left hand is considered disrespectful because Thai people use it as the bathroom hand.  Although they tolerate the use of the left hand among tourists.  I’m left-handed and I had no problem there.

Scammers are all around Bangkok. In fact, it’s a well-developed network that has been around for decades.

Don’t buy any type of jewelry that is “promoted” by anyone on the streets, and don’t believe in the “one week only sale at huge discounts… ending today” selling phrase. That’s their way of putting some pressure on you to convince you into buying jewelry at “exclusive” prices.

These scams are usually done by tuk-tuk drivers and some local aides (and even foreigners) that catch any unsuspecting tourist by offering some sightseeing “advice”.

After the “advice” they offer you an all-day special tuk-tuk ride for 10 Baht (which is true), but after some quick sightseeing, they take you to some jewelry and “fashion” stores where the driver will earn a commission whether you buy something or not.  The stores might look authentic, but the jewelry is fake.

Thailand’s health care system is considered one of the best in the world. Don’t be afraid to use it, if necessary.

Know that tuk-tuks will try to overcharge you at first. Negotiate and settle the price for your ride right before hopping in.

5. The Political Scenery Can Be Volatile

It’s good to be up to date on Thailand’s current political status. Local politics are unstable and the panorama, especially in Bangkok, can change at any moment. It’s always good to have a plan “B” (another Thai province or bordering country), just in case.

6. Having Comfy Sandals Is Convenient

Wearing sandals/flip-flops most of the time is very convenient. You will be taking them off constantly as you visit the temples or sacred places, and as you hop on and off of the long tail boats.

7. They Use a Different Calendar

The official year in Thailand is 2562 (not 2019). Since several decades, the westerner New Year’s day is also a public holiday in Thailand. But the popular New Year’s Day for Thai people happens from April 13 to April 15; it is called Songkran.

The reference point is Lord Buddha’s birth 543 before Jesus Christ. Also, if you manage to be there during this time of the year, you will see and participate in the most insane water-fight. Thais celebrate the New Year by throwing water at EVERYONE!!

Monks are not allowed to beg for money or food. If you see a monk begging, then it’s just someone trying to pass as a monk just to get your money.

Whenever possible use the Wai – saluting with your hands together and bowing slightly – Thai people appreciate when foreigners show interest in their customs.

Thailand can be a noisy country, especially Khao San Road in Bangkok. Even though you will inevitably spend some nights partying, there will be other nights where you will just want to have some peace and a good night sleep.

Before booking a hotel in Bangkok (or anywhere in Thailand), I recommend checking their reviews on TripAdvisor so you can see if they are noisy or not.

And just for fun, here are a few more…

It’s illegal to own a copy of the Movie The King and I. This movie is banned in Thailand (I wonder why?!)

12. Bangkok’s Real Name is Quite Long

Try spelling this!…  “KrungThepMahaNakhonAmonRattanakosinMahintharaAyutthayaMahadilokPhop NoppharatRatchathaniBuriromUdomRatchaniwetMahasathanAmonPhimanAwatan SathitSakkathattiyaWitsanuKamprasit”  Finished?… That’s the real name of Bangkok.  It’s the longest in the world.  Phew! 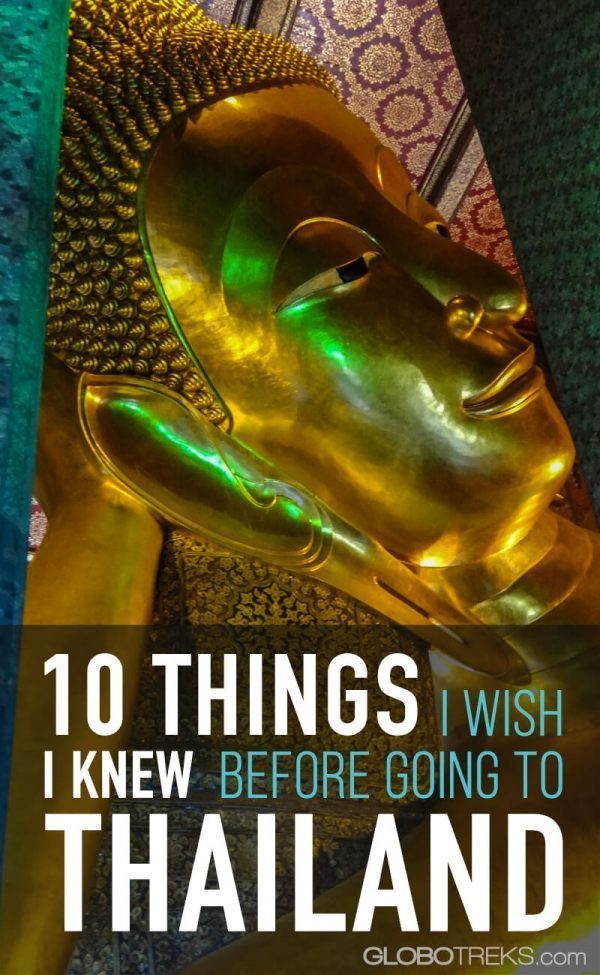