As a large, vibrant and photogenic capital city with a history that dates back to the 1stcentury AD, Budapest might feel overwhelming to a first time visitor who only has a day or two to absorb what makes this city so great.

But still, it is possible to enjoy the city and get an overall sense of its history if you pick the best sights and plan your day carefully.

From the gorgeous Baroque and Gothic architecture to the dramatic history behind its sights, here’s how you can spend a weekend in “the Pearl of the Danube” and see its most important sights.

1. See and Understand the Danube River

The Danube River holds an important role in the city’s history and development. Originally, Budapest was three separate regions, with Buda and Óbuda (Old Buda) on the western side of the Danube, and Pest on the eastern side.

It wasn’t until 1849, when a permanent bridge connected Buda with Pest, that these two regions began to function more like a city –leading to its official unification as a city in 1873– now known as Budapest.

Today, people still refer to each of the three regions by their old name, so it’s common to hear “Head to Buda,” and so on. Generally, Buda and Óbuda are the older parts of the city, while Pest is the newer part – though we are still talking about the 1800’s. 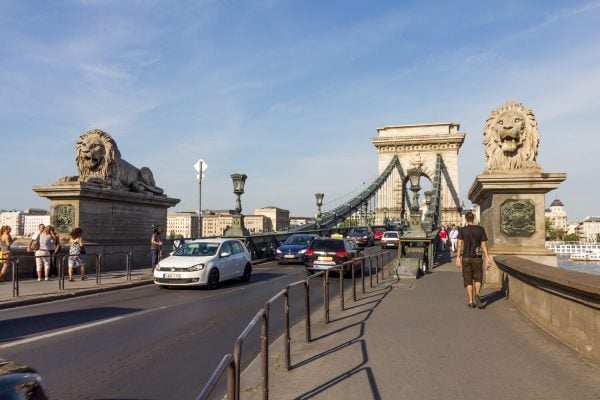 The Széchenyi Lánchíd, or Chain Bridge, is the most famous bridge in the city and the first permanent bridge to connect both sides of Budapest – since 1849.

With 380 meters in length, not only was the bridge considered an engineering feat at its time, but it was also seen as a beautiful structure with its stone lions, pillars, and wrought-iron lamps.

During World War II, the bridge was bombed and mostly destroyed during the Siege of Budapest, but in 1949 it was rebuilt to what we see today. 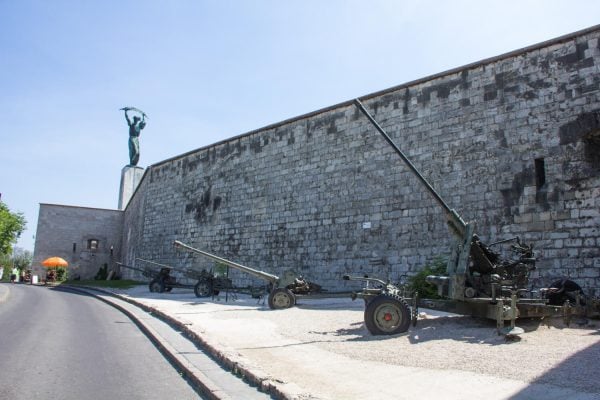 3. Hike Up to the Citadella

The Citadella is a preserved World War II air-raid bunker located on top of Gellért Hill, in the heart of Budapest.

The Citadella Fortress was built in 1854 and gained special military importance during WWII, becoming the headquarters of the air defense of Budapest.

From the Summer of 1944, part of the German Luftwaffe headquarters also moved to the Citadella to combat the heavy air raids that were launched against Budapest.

During the war, a 750 m2, three levels deep bunker of thick reinforced concrete was built to sustain the intensive allied air raids. Today, there’s a WWII museum, in addition to the Siege of Budapest.

Additionally, right in front of the bunker is the Liberty Statue of Budapest, and if you walk around the Citadella, you’ll get some of the best views of Budapest from above. It’s also worth going during sunset. 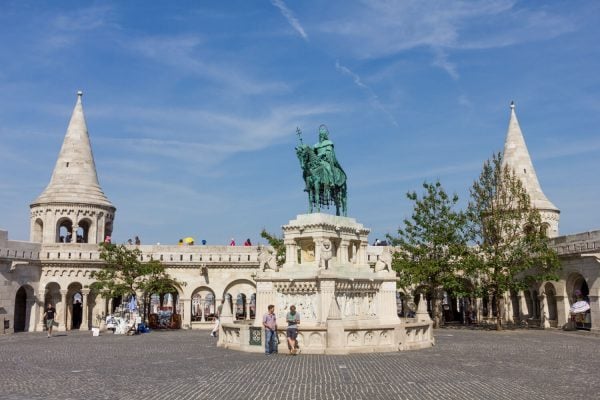 The Buda side of the city is mostly composed of medieval buildings atop leafy hills, medieval castles, and well-preserved old town.

There you can visit the Matthias Church, Fisherman’s Bastion, Buda Castle, and walk through its cobbled streets – which look so well preserved, but in reality, they were heavily damaged during World War II.

One of the most interesting sights in the Buda side is the Hospital in the Rock with its series of tunnels in the hills of Buda that were turned into a hospital in 1935 as the city prepared for World War II (they were also used during the Hungarian Uprising). 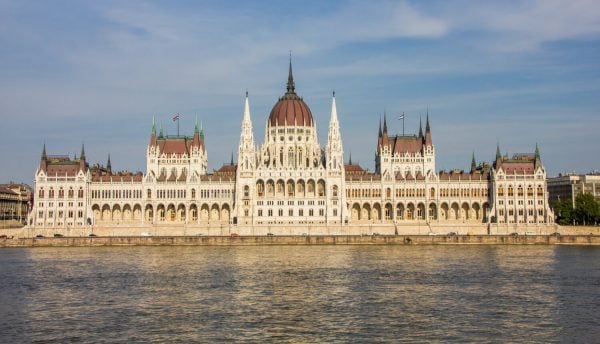 5. Marvel at the Hungarian Parliament

Arguably Budapest’s most impressive building, a visit to the Hungarian Parliament should be on your list – or at least seeing it from across the Danube.

Should you wish to visit it, you can take one of its 45-minute tours where you’ll learn about Hungary’s government. You’ll also get the chance to see the interiors and get a close up of its exterior, designed in a Gothic Revival style. To save time, buy your tickets online beforehand. 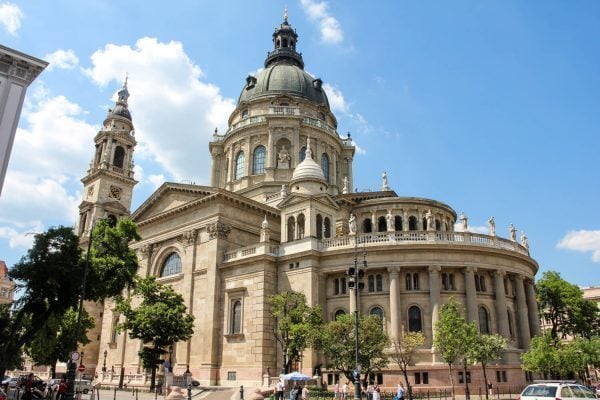 St. Stephen’s Basilica, named after Saint Stephen who became king of Hungary in 997, was finished in 1905 with a neo-classical and neo-renaissance architectural style.

Saint Stephen, the king, was celebrated by the church and canonized after his death in 1038. It is said that after his death, his right hand (now referred to as the Holy Right Hand) was found intact, making it a revered object.

The hand traveled from Hungary to Vienna, Transylvania, and Dubrovnik before returning to Hungary in 1945 where it has been on display in St. Stephen’s Basilica ever since.

Also, for those interested in unusual sights, did you know there’s a Ronald Reagan’s Statue in Budapest? Yes, it’s located at Liberty Square, not too far from the Basilica. 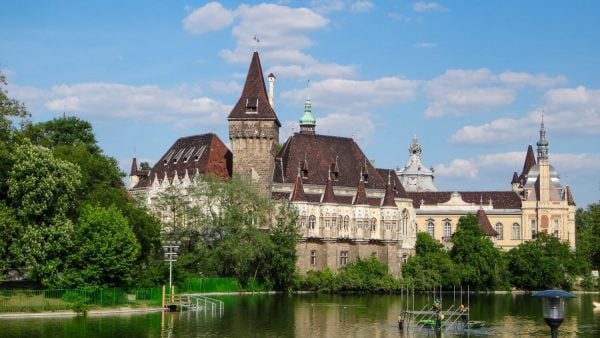 7. Romanticize at the Vajdahunyad Castle Budapest in City Park

Vajdahunyad Castle is considered one of the romantic castles in Budapest. It is located in the City Park, next to the boating lake.

Even though it looks like a medieval castle, it was only built in 1896 and is, in fact, an amalgamation showcasing the Hungarian architectural evolution from the middle ages to the 18th-century – including Romanesque, Baroque, Gothic Renaissance, and more. The castle is the home of several concerts, festivals, and exhibitions.

If a pastiche of a castle is not your thing, spend some time at the park, which is quite relaxing for a picnic and leisure boating. 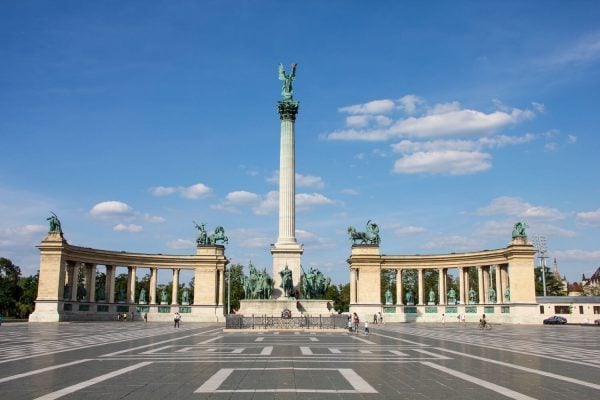 The 19th-century Heroes’ Square is a large and quite impressive square built to commemorate the 1,000-year anniversary of the settlement of Hungary in 896.

Walk along the Millennium Memorial – which commemorates past leaders and war heroes in Hungary’s history.

The memorial features Archangel Gabriel in the central column, flanked by the seven leaders of the tribes that settled Hungary on one side and other important leaders in Hungary’s history on the other side.

There is also the Tomb of the Unknown Soldier. While it is known as a tomb, no one is buried here. 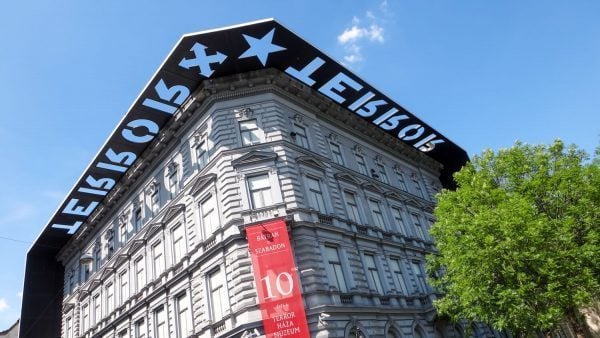 9. Ride the Millennium Line and Visit the House of Terror

Take the Millennium Line of the Metro from Heroes Square station to Vorosmarty Utca station.

This is the first metro line of continental Europe. It was constructed for the Millennium Celebration of 1896, commemorating the Hungarian Conquest of 896.

It’s a regular modern train, but hey, it’s fun to say you’ve been on the oldest metro line in continental Europe! Once out of the station, look for the building with the huge void letters on its ceiling spelling: T E R R O R.

This is the House of Terror. This museum is two parts informative and one part spooky with one of the best-curated exhibition that tells about two tragic periods in Hungarian history (and more) – including the repressive rules of the Nazis and later of the Soviets.  It’s so well represented it will give you chills! 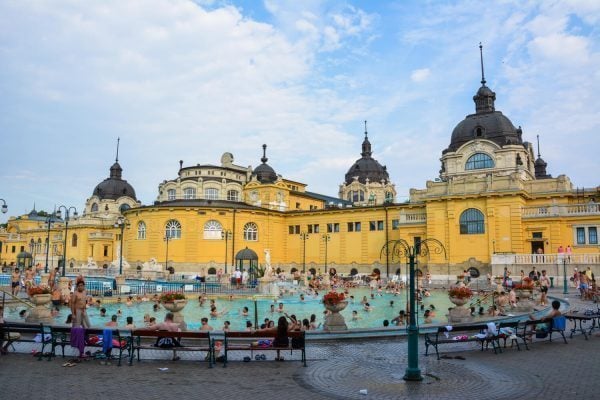 10. Relax in the Széchenyi Thermal Baths

Budapest is home to 118 natural thermal springs, which make possible for Budapest to have several thermal baths. The thermal bath culture, though, was brought by the Turks when they invaded Hungary centuries ago.

The most famous, and a full experience on its own, is the Széchenyi Baths. These are the largest thermal baths in Europe, with a combination of outdoor and indoor pools that range in temperatures from 38 to 42 degrees Celsius.

It is said these waters have healing powers, so why not give them a try?

Lastly, I recommend buying the Budapest Card for 24, 48, 72, and up to 120 hours to make the most of your day and have a hassle-free experience.

It includes unlimited travel on public transportation, two free walking tours, free entry to lots of museums and spas, and discounts on other sights as well as the airport shuttle service. Well worth its cost! You can buy yours here. 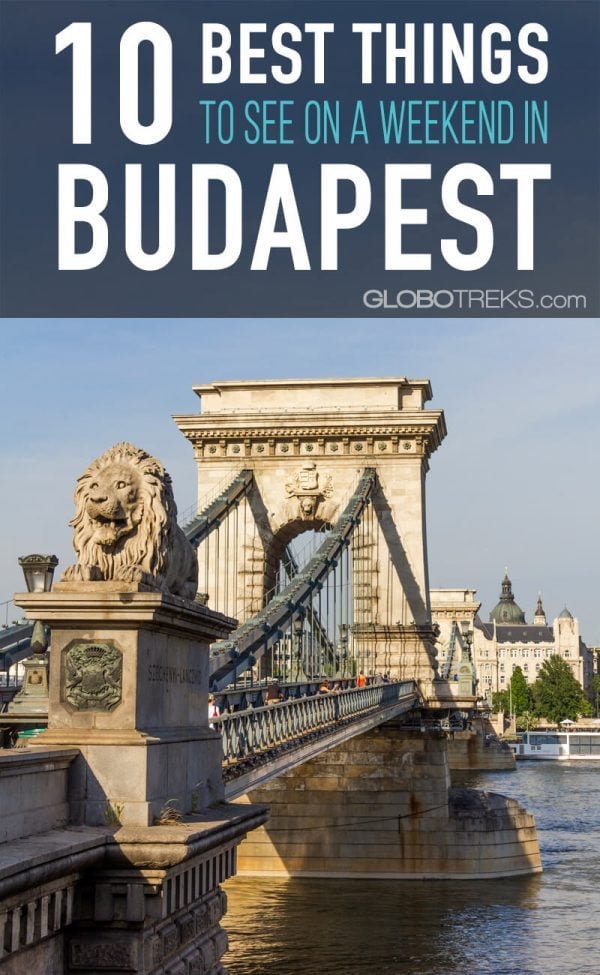