Iguazu Falls: Getting The Best Views From Both Sides

Iguazu Falls is the largest waterfall in the world and one of the most impressive natural wonders you’ll ever see.

The falls are divided between Brazil and Argentina, allowing visitors to visit and get up close from both countries. So a question most people have when visiting Iguazu Falls is, which side should I see?

I had that same question when I visited it, and since I had the opportunity, I decided to visit both sides – the Brazilian and the Argentinean.

While the falls are divided by about 20% on the Brazilian side and 80% on the Argentinean, once I saw each side I realized that both countries have something unique to offer that makes it worth visiting.

I love dealing with travel logistics, so I visited both sides on my own, including the border crossing, which I’ll explain below. But if you prefer not to deal with any planning logistics, I highly recommend this two-day tour that takes you to both sides of the falls

Seeing the Brazilian Side of Iguazu Falls 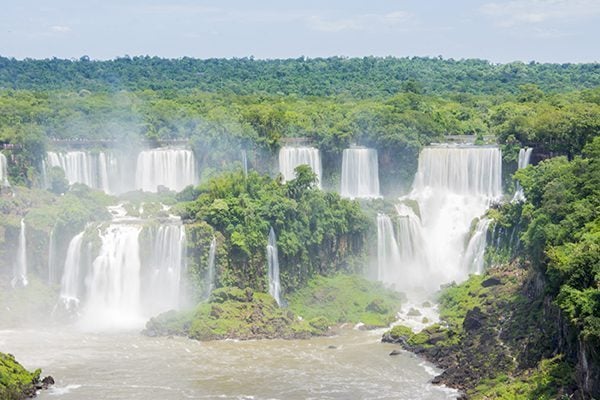 Since I first arrived in the town of Foz do Iguaçu in Brazil, I decided to visit this side first. From the town’s Terminal de Transporte Urbano (bus station), I took the public bus that goes all the way to the Iguazu National Park.

It takes about 40 minutes to reach the park’s entrance, where I bought the ticket and hopped on a panoramic bus that took me to the main mirador walkway of the falls.

Along the way, the bus did a few stops for people interested in hiking in nature along the Iguaçu River. Since I only had the afternoon and the weather was dubious, I decided to skip the hike and headed straight to the falls.

Once I hopped off, I was just a few steps away from witnessing the immense power of Iguazu. It is said that upon seeing Iguazu, the United States First Lady Eleanor Roosevelt exclaimed “Poor Niagara!”

While I’m yet to see Niagara Falls in person, I can say Iguazu is as impressive and powerful as you can imagine.

The name “Iguazu” comes from the Guarani or Tupi words y, meaning “water”, and ûasú, meaning “big”. According to legend, a deity planned to marry a beautiful woman named Naipí, who fled with her mortal lover Tarobá in a canoe.

In a rage, the deity sliced the river, creating the waterfalls and condemning the lovers to an eternal fall.

Whether by a deity or not, there’s no denying that some great forces created this awe-inspiring natural wonder. 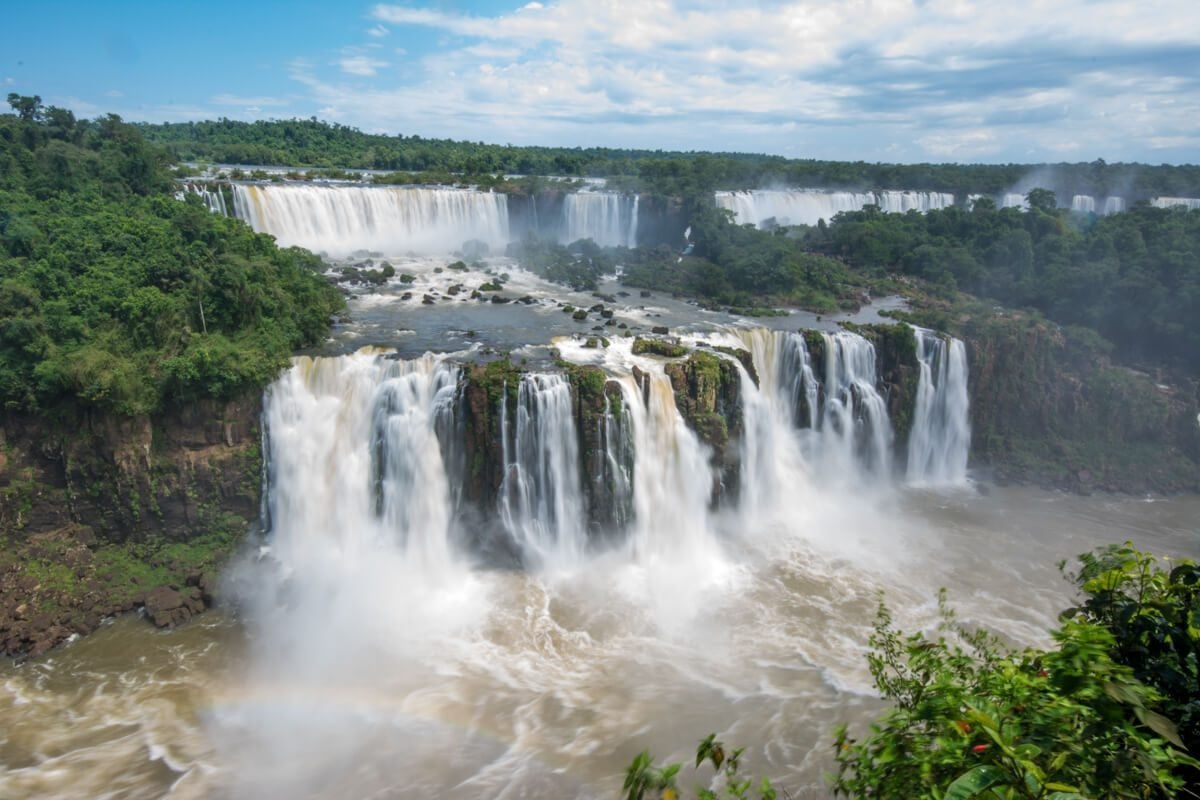 I followed the walkway along the canyon, stopping at every viewpoint to admire every single fall on the other side of the river.

After about an hour or so walking and sightseeing, I reached the culminating point of the walkway – the extension to the lower base of Devil’s Throat (Garganta del Diablo in Spanish or Garganta do Diabo in Portuguese). 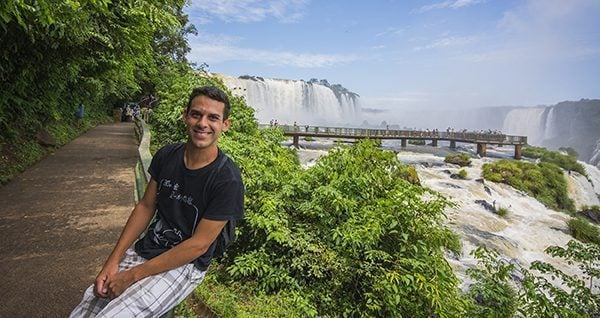 The Devil’s Throat is the main attraction on both sides of the falls since approximately half of the river’s flow falls into this long and narrow chasm.

I stepped on the aluminum walkway and went deep into the fast-flowing veil of mist created by the powerful cascade, which at this point was mere meters away from me.

On one side of the walkway, I had a curtain of water flowing from above; on the other, I could see water flowing even deeper on a vertigo-inducing fall that seemed to have no end.

It was on that walkway that I realized that I was somewhere in the middle of a stepping waterfall.

From the end of the walkway, I enjoyed the fresh mist and the gorgeous views of the Devil’s Throat – in addition to getting soaking wet. 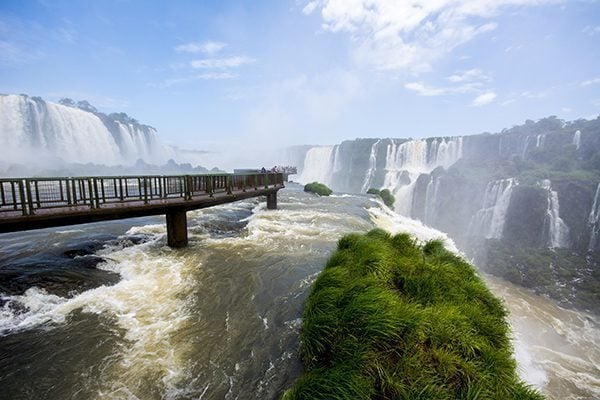 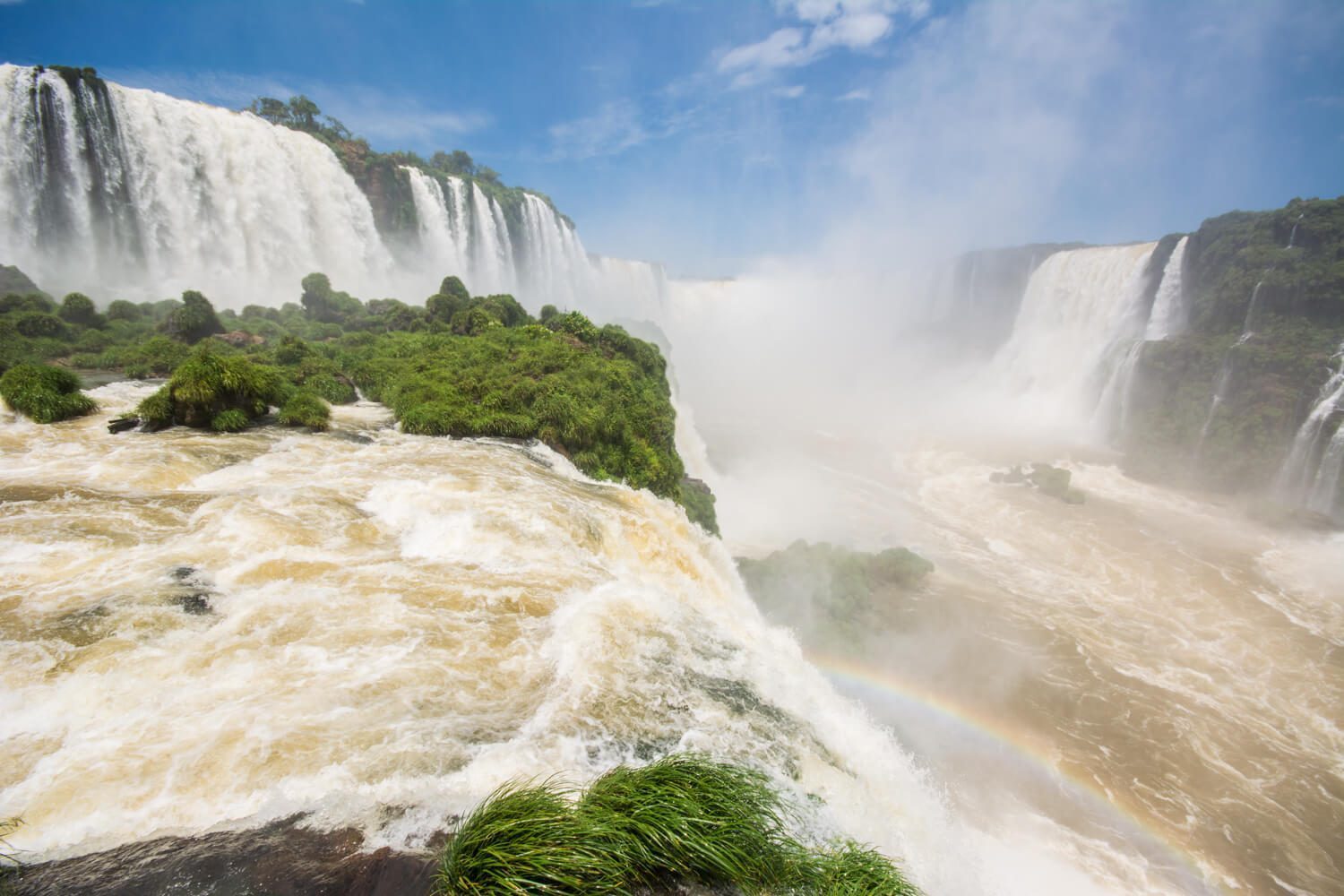 To culminate the walkthrough, I took the elevator to the top of the viewing tower, from where I could see at about eye level the flowing Iguaçu River before taking the thunderous plunge. 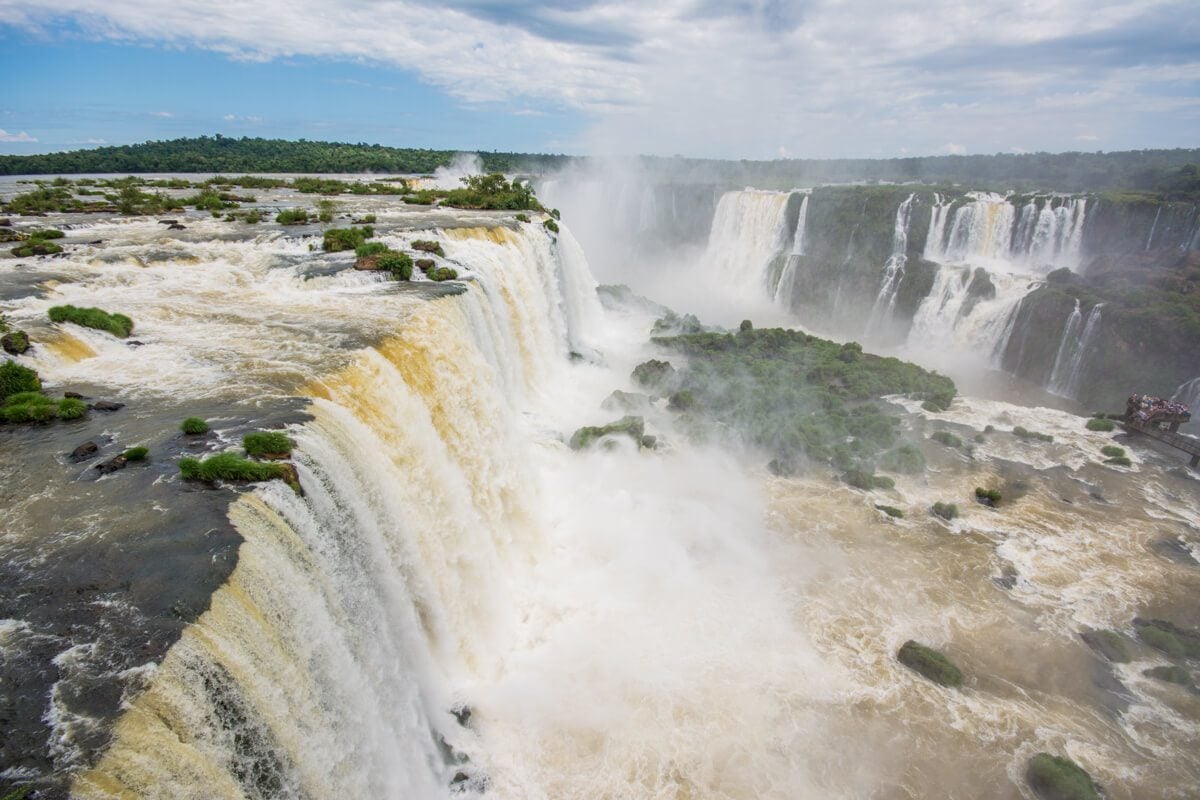 Seeing the Argentinean Side of Iguazu Falls

The next day I woke up early to spend the entire day on the Argentinean side of the falls.

Crossing borders between Brazil and Argentina was easy, and the process took only about two hours – from hopping on the bus in Brazil, passing immigration, and reaching the bus station in Argentina. 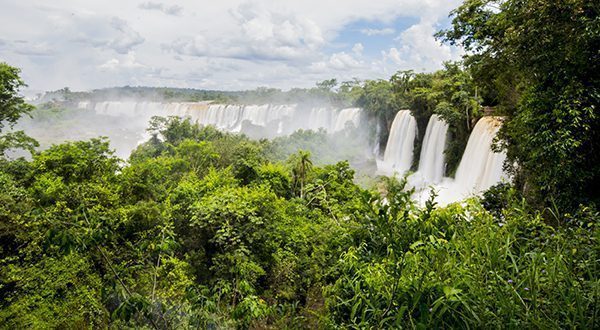 Since I was staying in Argentina, I quickly checked-in in my hostel and went back to the bus station to take the next bus to the Argentinean side of the national park.

Once at the entrance, I bought my ticket (yes, another one), and took the Jungle Train all the way to “Estación Garganta.”

This was the last stop of the train and the entry point to have an up-close look of the Devil’s Throat from the Argentinean side.

From the train stop, it was a 1.2km (.75 mile) walk on catwalks until I reached the Devil’s Throat. For the largest portion of this walk, the river flowed smoothly under my feet. That’s how wide this part of the river is! 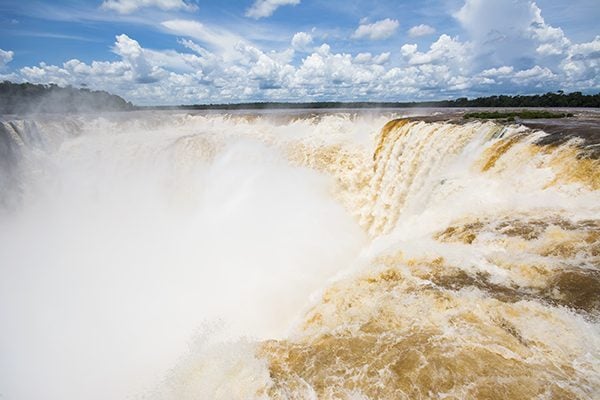 Once at the Devil’s Throat, I simply stood there for about half-hour admiring the water rush down the 80 meters drop (262 feet) into a chasm that seemed to have no end due to the blur created by the dense mist. 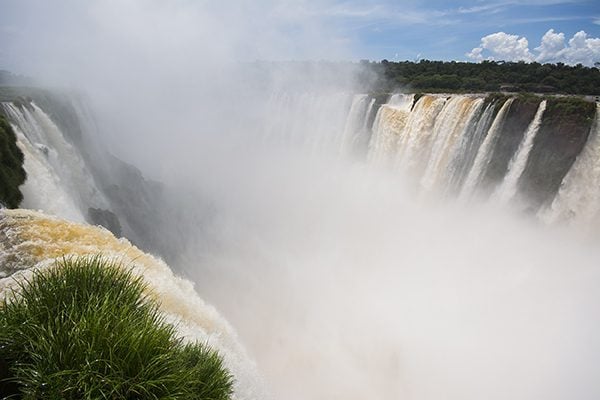 Compared to the Brazilian side, here I was standing right at the mouth of the most powerful fall in Iguazu. To me, it was incomprehensible how much water could flow through that space in such a short amount of time.

The thunderous sounds, the mist, the visual of water breaking into millions of drops and splashing in disparate ways. Yesterday I saw the Devil’s Throat. Today I was feeling it.

I loved spending time at the Devil’s Throat, but there was much more to see ahead, so I took the train again to reach “Estación Cataratas” to see the rest of the smaller falls.

The Argentinean side has about 80% of the falls, and many of them can be seen from up close through a series of walkways known as the Upper Circuit and Lower Circuit. 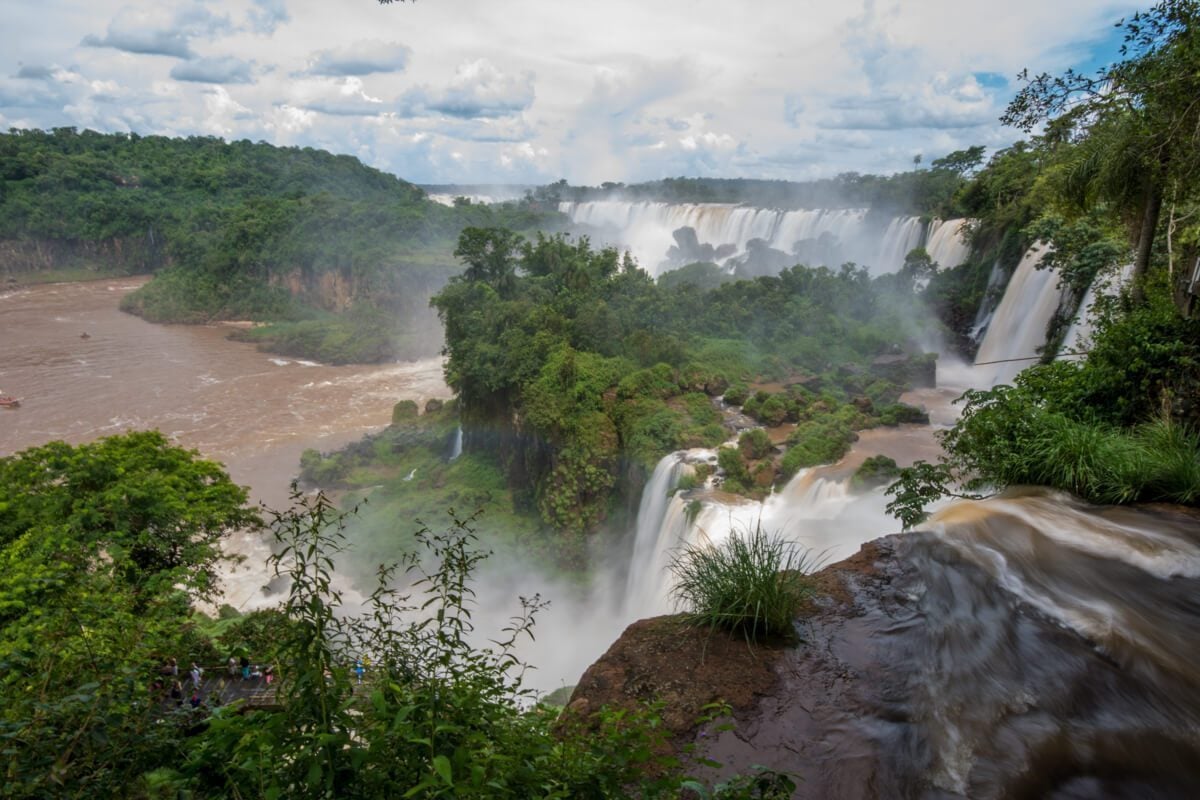 As their names imply, the Upper Circuit gives a view of the falls from above while the Lower Circuit goes closer to the dynamic curtain of water.

I started with the Upper Circuit, passing above falls like Salto Bossetti, Salto Adán y Eva, Salto Mbiguá, Salto Chico, and others.

At every viewpoint, I stopped to look down over the edge of the falls. There were moments when a rainbow adorned the mist flowing up from the fall. 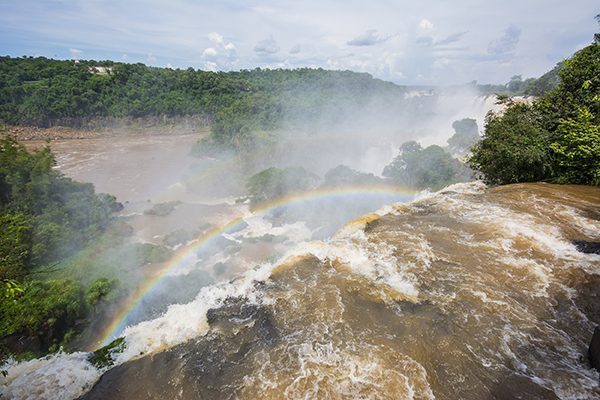 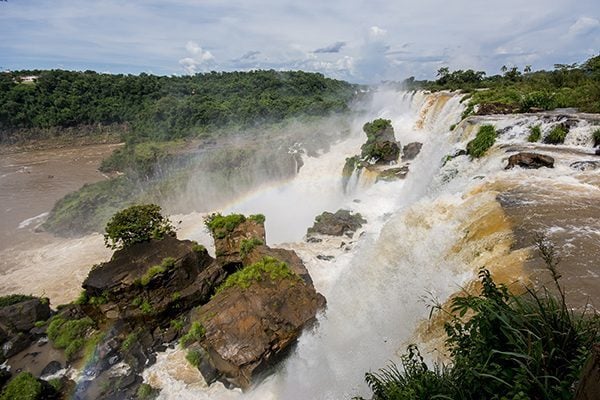 The Lower Circuit took me close to the lower part of some of the falls I saw from above, like Salto Dos Hermanas, and Salto Chico, among others.

But, beyond seeing falls, this walk was a nice immersion into nature since there were moments in which I was surrounded by dense trees and some fauna. 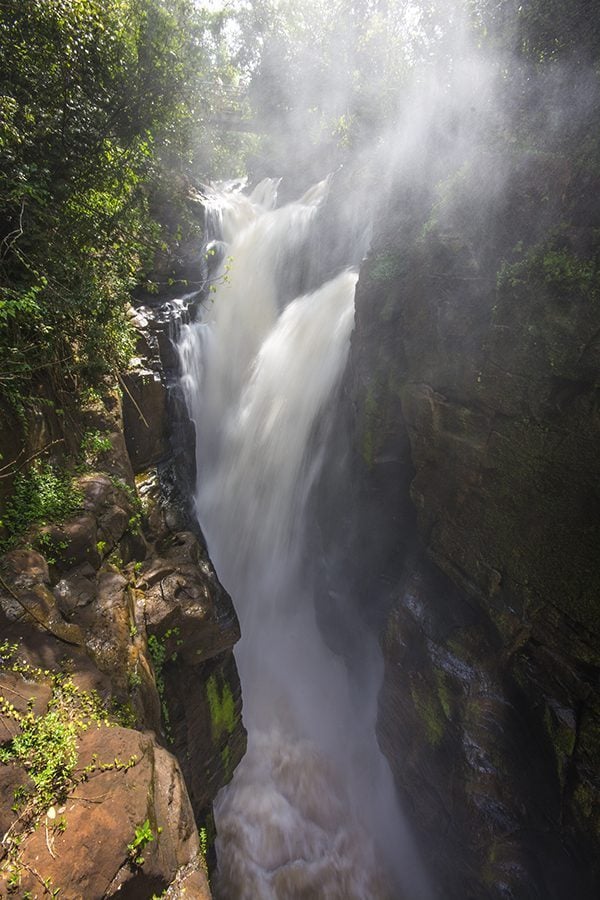 From the Lower Circuit, I took the famous speedboat that takes you close to the base of some of the falls to get soaked!

It was a quick 12 minutes ride, and while I enjoyed it, I can’t say it is truly necessary to do it. It was fun, though! 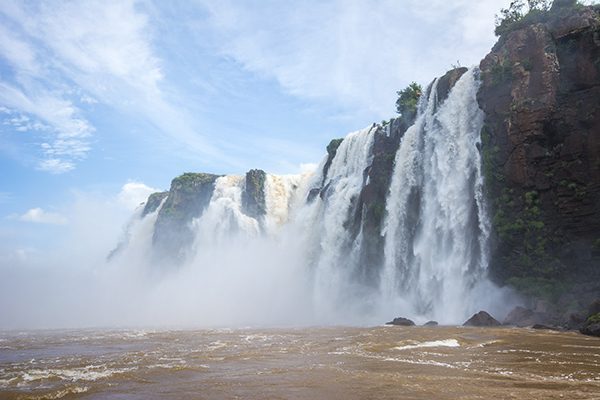 Comparing Both Sides of Iguazu Falls

I enjoyed seeing both sides and believe they both offer unique views and experiences. The Brazilian side gives you a panoramic view and lets you see how immense are these falls.

The Argentinean side, on the other hand, gives you a closer look at the falls and the opportunity to feel some of them.

I’m glad I saw the Brazilian side first since I got the overall picture of what I was seeing and got a taste of feeling some of the power of the Devil’s Throat.

Then, on the Argentinean side, I experienced the falls up-close and almost individually, and witnessed the “grand finale” of being right at the mouth of the Devil’s Throat.

In Argentina, there were points in which 260 degrees of waterfalls surrounded me.

Both parks offer lots of information along the way, so there’s no need to hire a guide.

If you’re continuing your trip across the border, I recommend exploring more of both Argentina and Brazil. If heading south, here are a few fun facts about Argentina and even some tips for a road trip on the Northeast of Argentina.

If heading north, here are some fun facts about Brazil and don’t miss visiting iconic cities like Rio de Janeiro and Sao Paulo! 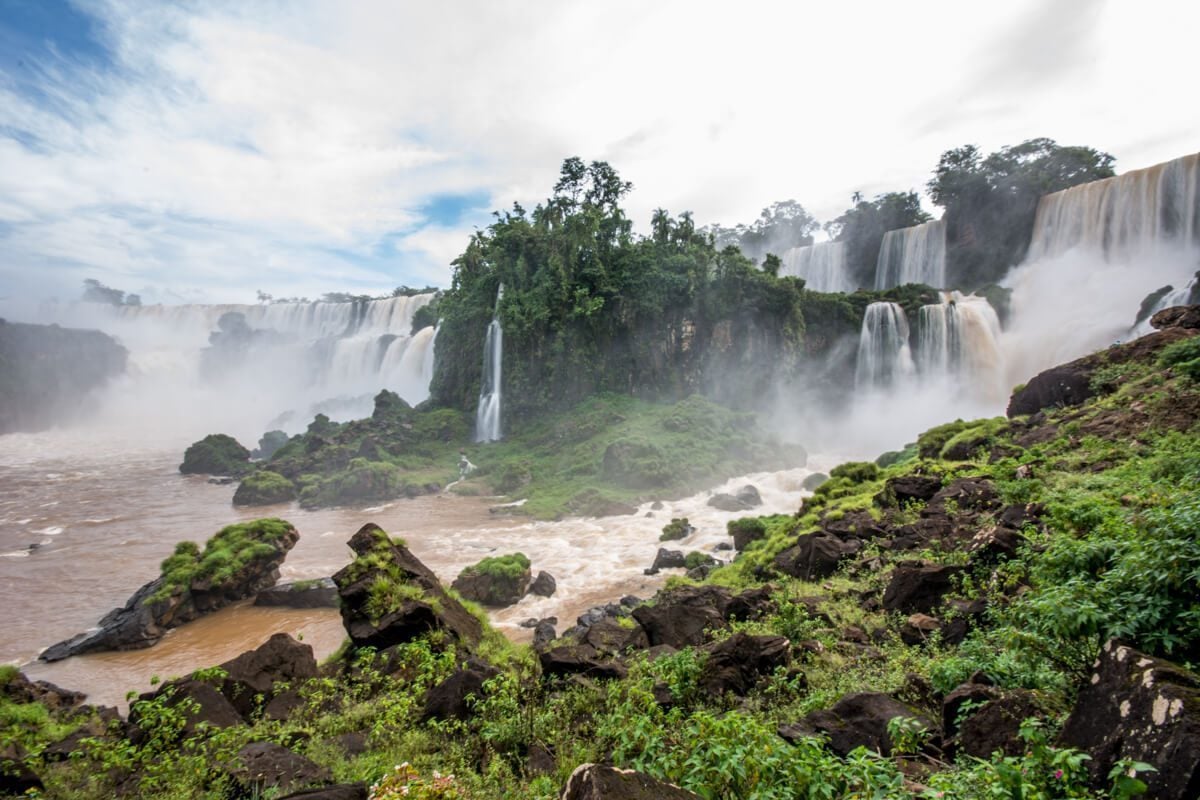 Minimum time to spend there: 3-4 hours (if you don’t hike)

Take a bus with a local bus company (costs 100 pesos roundtrip/$10) to reach the National Park from Puerto Iguazú.

Minimum time to spend there: 5-7 hours

Boat Tour operator in Argentina is Iguazú Jungle, and it costs 270 Argentinean Pesos ($25).

Important note: The park entrance on the Argentinian side of the falls only accepts cash payments in Argentinian pesos. They do not accept credit cards or debit cards, nor do they accept Brazilian Reais (or U.S. dollars or any other currency). Make sure to exchange your money before taking the bus to the park.

Locals and Mercosur residents pay a lower entrance price at both sides of the park.

Buses to Cross the Border

There are hourly scheduled buses crossing the border between Brazil and Argentina. Depending on which company you take, you will take the bus at the bus station and be dropped at the border and pass through immigration.

Then, you’ll take another bus with the same ticket on the other side of the border to reach the other country’s bus station. Other companies drop you, wait for you at immigration, and take you to the bus station with a single bus.

I took the cheapest bus from the Terminal de Transporte Urbano in Foz do Iguaçu and paid only 4 Reais ($1.50) for the ride to the border, and it included the ride on the Argentinean side with the other bus.

Alternatively, there are two-day tours that take you to both sides of the falls. This way, you don’t have to plan anything or worry about transportation across the border. 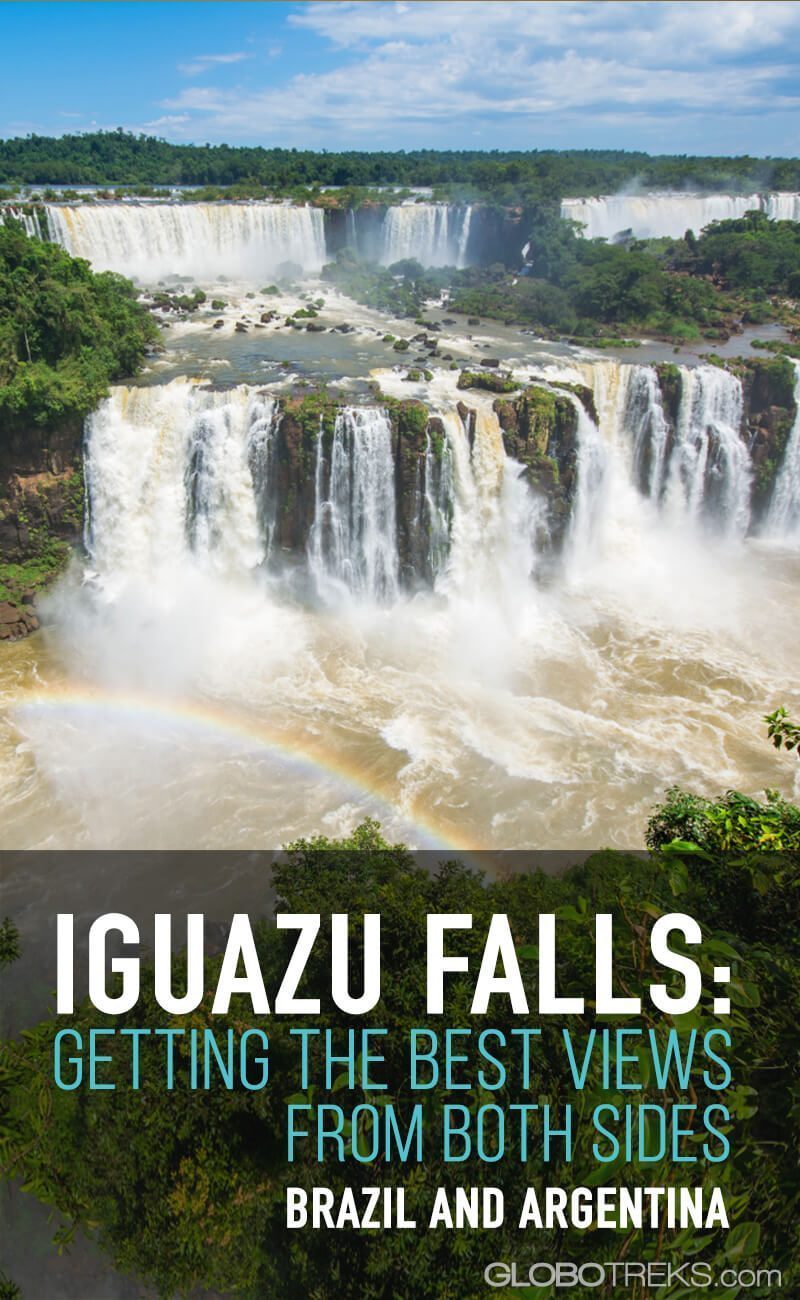 16 thoughts on “Iguazu Falls: Getting The Best Views From Both Sides”