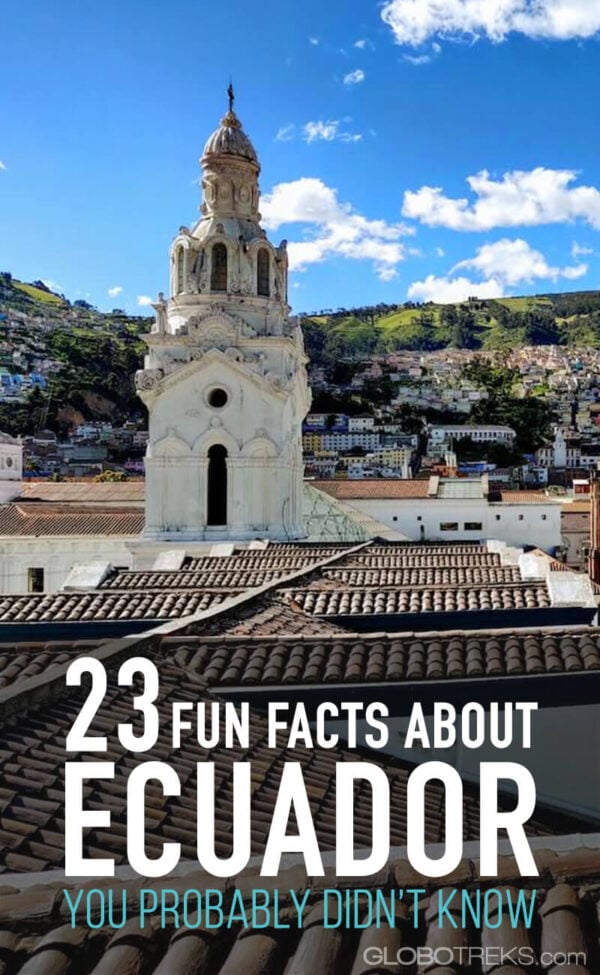 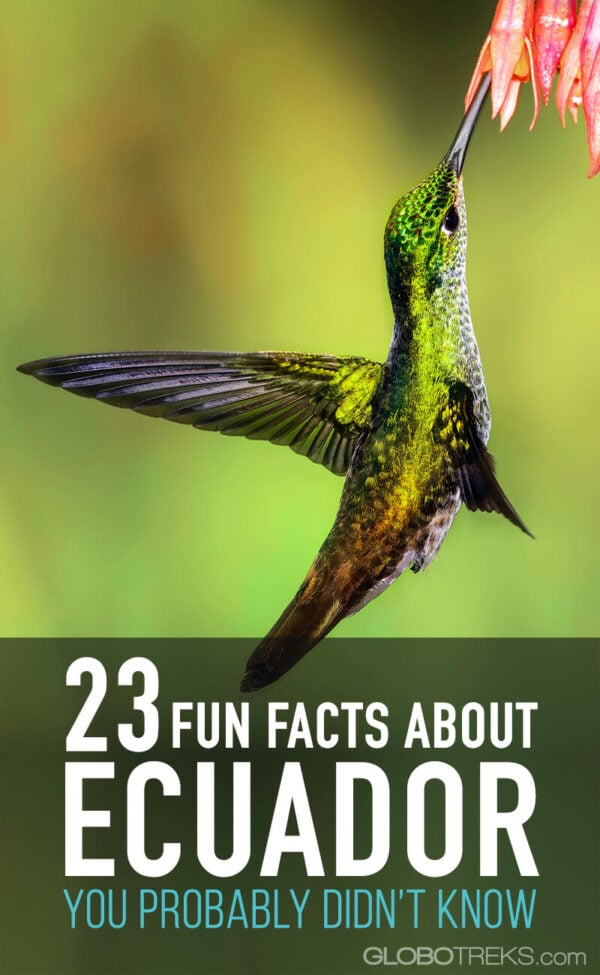 Located on the South American continent directly on the Equator, Ecuador is well known for many things. From its vibrant culture to its diverse landscape, this country is as beautiful as they come.

There are so many reasons why you’ll love the country, but we’ll share just a few cool facts about Ecuador.

Here are some fun, interesting and historical facts about Ecuador that you probably didn’t know.

1) Nature Has All the Rights in Ecuador

Not too long ago, in 2008, Ecuador became the first country in the world to officially acknowledge the rights of nature.

In 1851, Ecuador abolished slavery for good and all black slaves were freed.

3) Say No to The Death Penalty

Ecuador took charge early on in the 20th century by being the first country to abolish the death penalty.

Chocolate in Ecuador is a staple for most. With cacao being grown in South and Central America for years, the history is deep, including cacao being used for anti-inflammatory properties in the past.

For over 5000 years, chocolate has been consumed here. Ecuador might even be the originator of cacao.

5) The Country Goes Bananas For Fruit

Ecuador is in fact the world’s largest exporter of bananas. Not only do they supply the yummy yellow fruit, but it is actually a staple in the Ecuadorian diet and cuisine.

And if you thought one kind of banana was enough, there are around 300 types of bananas in Ecuador.

Ecuador is known for its extensive collection of flora and fauna, but they also have the most biodiversity per square kilometer in the world. Not only that, but it is also 1 in 17 countries around the world that are mega-diverse.

There are many interesting things about Ecuador, including the fact that an estimated 40% of adults in the country don’t even own a bank account.

9) What Do Ecuadorians Speak?

Although the country is far from Europe, the official language of Ecuador is Spanish, although, with some different dialects here and there.

Ecuador can top the charts for having more phones than people. How is that even possible? Nobody is sure but it’s a fact.

11) A First for World Heritage Sites

12) The Theory of Evolution

Speaking of the Galapagos Island, Charles Darwin, famous for his Theory of Evolution, based his theory on the discoveries he found at this island. No wonder it’s a World Heritage Site.

While Ecuador remains outside North America, it still uses the American Dollar and has been ever since 2000. So no need to worry about exchange rates or swapping currencies when visiting this little place.

Every place has its own cuisine, but Ecuador takes this to a new level with their delicacy called “cuy” which believe it or not, is guinea pig meat.

Along with its collection of more than 25,000 plant species, Ecuador is specifically known for its gorgeous orchids. In fact, it is even known as the orchid capital of the world, with more than 4,000 species of the beautiful flower.

For those bird-watchers out there, Ecuador is the ultimate destination. According to statistics, the country has more birds per square kilometer than any other country in the world.

This is the place to find new birds with 1632 different species. Even the bird-callings range to 132 different ones.

While in Ecuador, you’ll want to boil your water a little differently because only in Quito does water boil at 90 degrees celsius, not 100. Apparently, it’s due to the altitude.

18) Roses Are Red, and Ecuador Loves Them

Out of the 25,000 plant species in Ecuador, there are thousands of flowers to admire. One, in particular, takes the trophy for being the national flower: the rose.

If you’re indecisive, you might struggle being a citizen in Ecuador as it is mandatory for citizens aged between 18-65 to vote.

Ever wondered how short a president’s term can be? Well in Ecuador, the first female president, Rosalie Arteaga, only served for 2 days.

Another interesting fact about Ecuador, is that while the official language of Ecuador is Spanish, some of the native languages include Quechua and Shuar.

22) Why Is Ecuador Called Ecuador?

So, why is Ecuador named what it is? The meaning or translation of Ecuador’s official name, República del Ecuador, is “the Republic of the Equator”.

This makes sense because the equator runs through the country. You can even stand in both the southern and northern hemispheres at once in Quito.

Looking for a Panama hat, travel to Ecuador to find yourself one of these woven hats made from toquilla palm plants (particularly strong and durable).

Traditionally worn in Andean culture during the mid-1600s. However, as of today, these hats reign popular all over the world, in movies and more.

That’s All About Ecuador Facts

Whether you’ve thought about traveling there before or not, now you’ve got all the Ecuador fun facts. And if you are planning on visiting soon, the Galapagos Islands should be at the very top of your list.