Socotra is an underdeveloped and isolated island, but that’s part of its charm. You go there mainly to see its endemic Dragon Blood Trees, get lost in nature, and soak up its beauty – which in my opinion is unrivaled by its uniqueness.

In fact, Socotra, which is roughly 370 km off the coast of Yemen, is considered to be the Galapagos of the Middle East thanks to its diverse and unique fauna and flora not found anywhere else in the world! 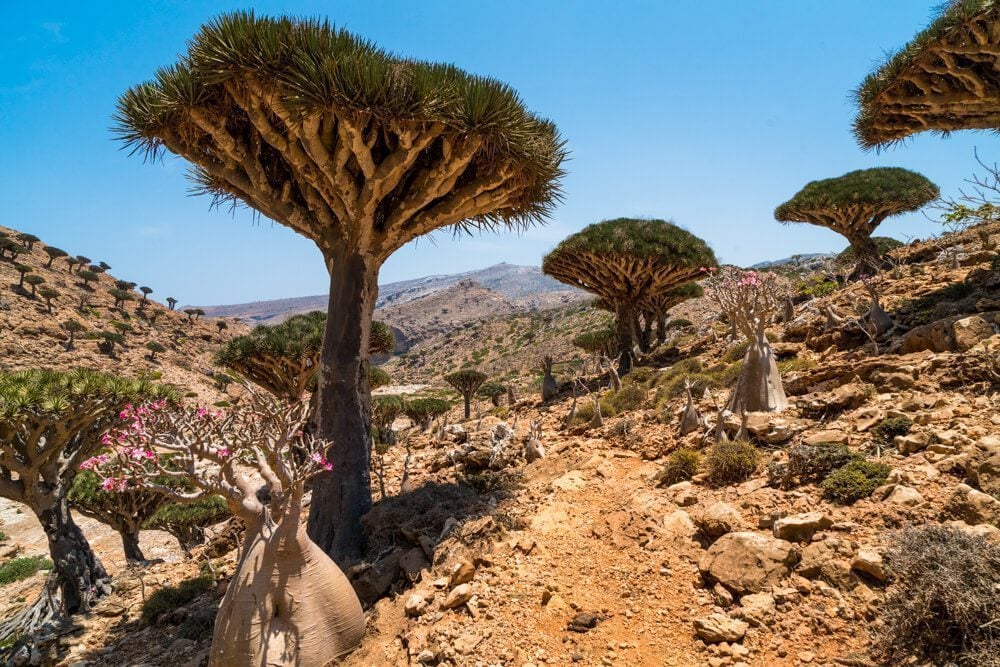 Getting disconnected in Socotra

Its capital city, Hadiboh, is what I would describe as a glorified village with just a few paved roads and hundreds of roaming goats around.

Wifi barely exists there. Well, if it works. Outside of Hadiboh, though… wifi who?

At first, I didn’t know how to spend a whole week by myself, offline. But guess what? In Socotra, it was easy!

My week was full of things to see and do, from hiking canyons to reach the dragon blood trees, to exploring caves and dipping in a completely desolated natural pool at the top of a mountain.

But, my favorite experience in Socotra was not planned at all.

The Lagoon and the Caveman

Halfway through my “forced offline detox” in Socotra, I reached the Detwah Lagoon on the western side of the island, near the small town known as Qalansiyah.

As with the rest of my trip, I was camping. And just like before, the weather was so good that I didn’t need to set a tent.

Instead, I threw my stuff and mattress in a small beach shack made with palm tree leaves. It was idyllic. 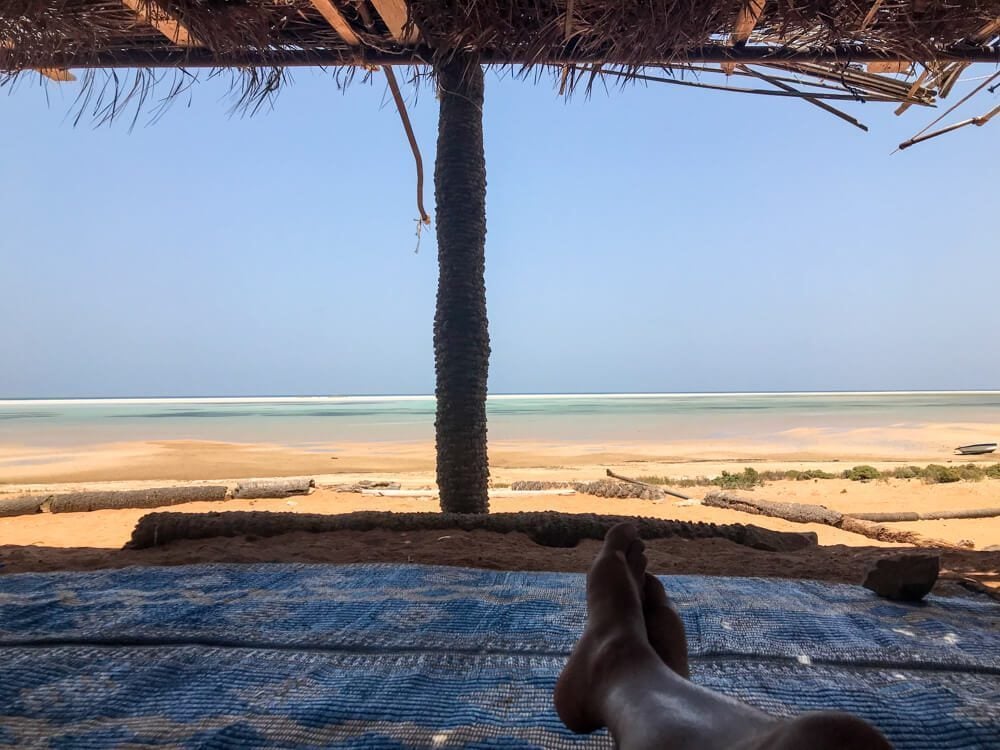 After enjoying the beach for a while, napping, and reading for a while, I felt like walking around and checking what was beyond the lagoon – reach all the way to the end of the lagoon, where it meets with the sea.

I set on what turned out to be a two-hour hike, surrounded by nothing but mountains and cliffs on one side, and the sea on the other.

At points, I stopped just to listen to the goats climbing up the mountain, the dozens of birds flying above, the waves crashing, and even the wind. Yes, the wind. That’s how peaceful and quite it was. All pure nature, not a soul around me.

On my way back, I came across a man walking the same rocky path. At first, I was going to ignore him and continue walking, but considering how friendly everyone had been on Socotra, I thought I should say hi.

I gave a quick hi, to which he replied with a very enthusiastic hi.

“I’m walking around the lagoon, now on the way back to my camping spot,” I replied to him.

“I know it. I saw it walking here. I’m Abdullah, I’m walking to my cave. I live there,” he said as he pointed towards the rocky shore I just walked.

There was no hesitation there. I wanted to see this cave. But, is he really a caveman? Do these people even exist these days? Well, to an extent, they do!

Funny enough, he calls himself Abdullah the Caveman. He was slim, tanned, and to my surprise, smelled pretty good. He was barefoot, wearing a denim shirt, and a traditional miwaz – male skirt in Socotra.

He was also carrying a cheap smartphone. He may be a caveman, but a modern one! 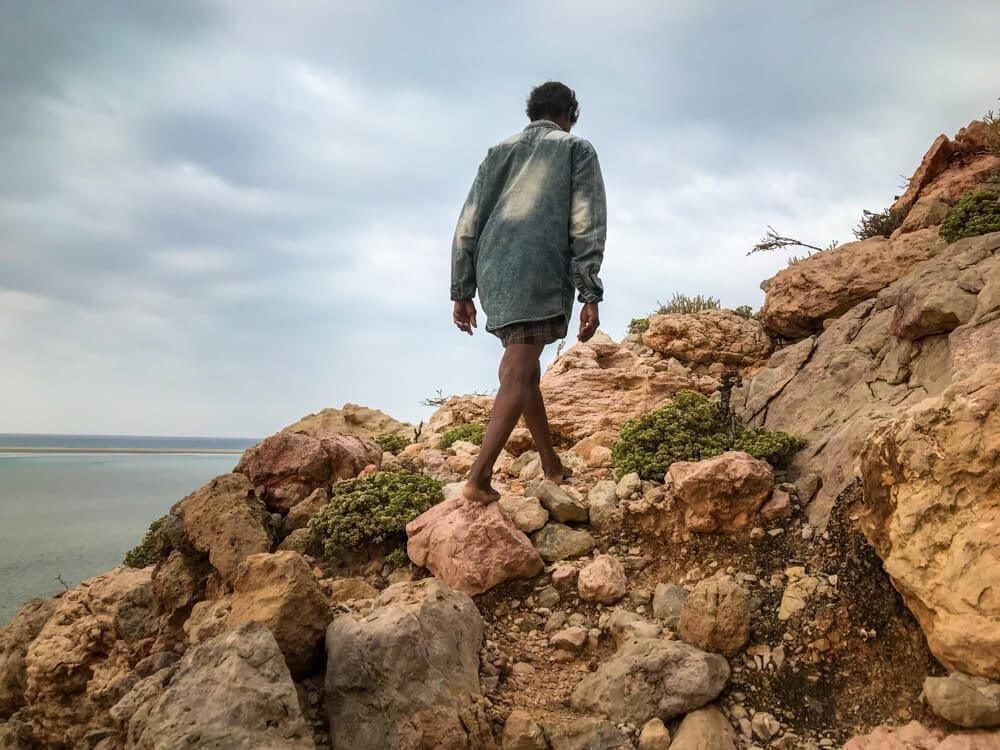 As we walked uphill to his cave he shared his knowledge of the region, especially everything that surrounded us.

Even though Abdullah speaks English, he is still learning, so whenever he doesn’t know a word, he complements it with body language, mimics, or drawing on the ground.

Listening to Abdullah’s energetic and creative stories and explanations were always fun.

“You see this tree? If you cut [referring to getting a wound while mimicking cutting open his skin], you cut the tree. You see that? [pointing at the sap] You put on your skin, and it’s new!”

As we got near the cave, I noticed a boulder that had “Welcome” written on it with white paint and some more text in Arabic.

“We are here! Look, ‘Welcome!’ [pointing to the boulder] Everyone is welcomed in my cave,” said Abdullah.

Funny thing is that earlier, as I walked along the lagoon, I had seen that “graffitied boulder” and wondered what was it about, but didn’t care enough to explore it. The cave was not as visible from where I was walking.

Abdullah’s cave is what I would describe as a picture window cave. It has a big opening towards the sea, and as you go deeper, it gets smaller in size. 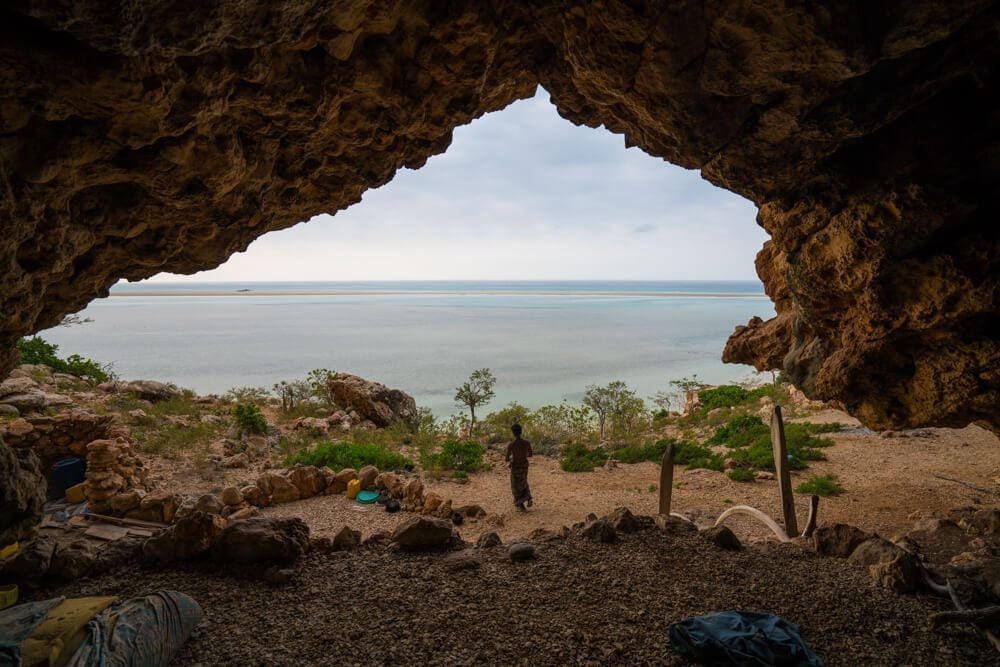 The entrance is decorated with two huge whale ribs and mandibles, making sort of an “official” entry threshold. 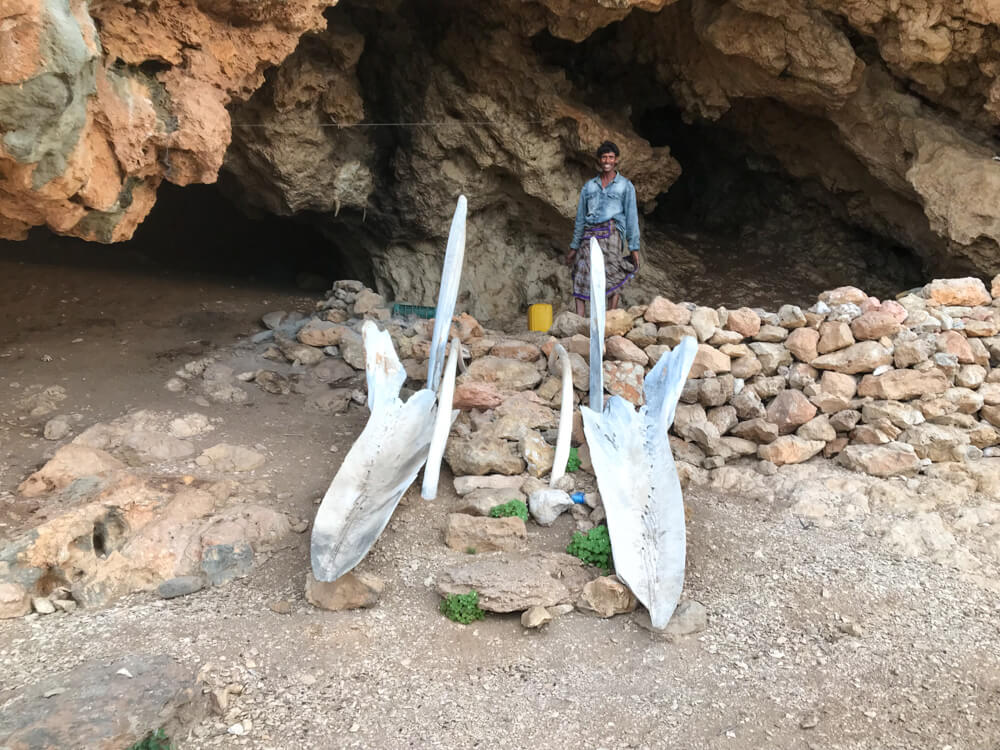 As Abdullah stepped into his cave, he immediately stopped. He carefully inspected the dirt on the ground. “Look, someone was here. I don’t know who, but he was looking for something,” he said as he inspected the fresh footprints.

Immediately I thought, phew, good thing I didn’t come up here unannounced when I saw the “welcome boulder.”

But, in about five seconds, Abdullah seemed to not care and turned towards me. “You want tea?”

Here I was, in a cave, in the middle of nowhere, and he still offers me tea?

Drinking tea is a strong tradition in Middle Eastern countries and it is one of those things you do and offer when socializing or welcoming someone to your home.

In the Middle East, you don’t say no to tea. Not even in a cave.

Abdullah immediately walked out to look for a few branches on the bushes near the cave, and in no time he set a small pyre by the cave’s entrance. He lit it, set his kettle, filled it with water, and dropped in a few tea leaves. 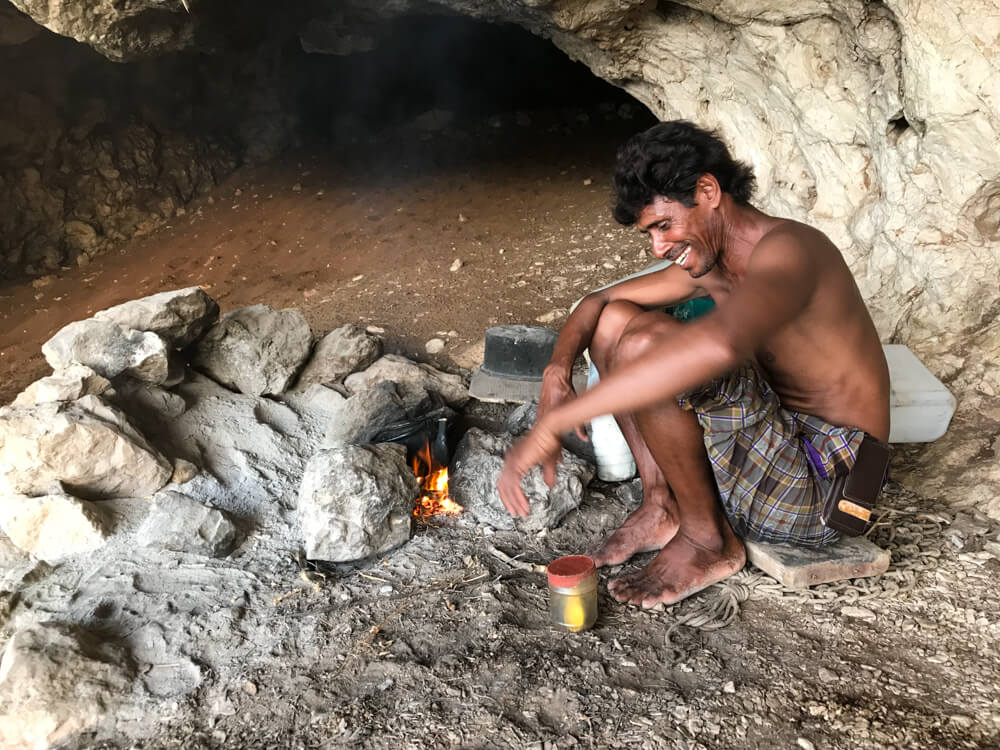 He then sat next to the small pyre as I sat on his only plastic chair – which curiously had its legs chopped in half.

This one I refused. While I could have eaten, I was certain he was going to cook fish or seafood – as Socotrians are pescatarians. I don’t eat any seafood, so I wanted to avoid an awkward meal.

As we drank our hot tea, Abdullah began to talk about his life in the cave. He was born in that cave 57 years ago (he thinks!) and has lived there basically all his life.

He said he could live in the town nearby, but he prefers to live in the cave – a simple life.

He has a wife and a son, both living in Qalansiyah, which is about 45 minutes to an hour walking from the cave.

He supplies himself with the freshest seafood, which he catches by hand on a daily basis. He also dries the salt from the seawater for seasoning, gets medicine from the trees, and does all other survival techniques you can think of.

In general, he survives with nature and only relies on modern techniques when something is not readily available around him.

In fact, as he told me, his cave proved to be safer during the powerful Cyclone Mekunu in 2018.

During the storm, many houses in Qalansiyah were either damaged or destroyed, but he gave shelter to his family and other families in his cave – in the deeper parts of the cave, protected from the rain and wind – and it proved to be safer than the “modern town.”

Abdullah also showed me some ancient pottery found in the cave, which according to him, predates him and his family. It belonged to “very very old people,” referring to generations before his or even another civilization?

He showed me how some of that pottery was used to give milk to babies through a small hole at the bottom and how precious it is for him to still keep and protect that heritage.

“Here, there were people buried too,” he said pointing to another cave nearby, where according to him over 40 corpses were dug out years ago. It was a burial cave from his ancestors.

It was almost sunset and I wasn’t carrying my headlamp with me, so I felt it was time to head back to my camp. But before I left, Abdullah wanted to share a bit more of his wisdom about Qalansiyah.

“Tomorrow, go very early on a boat to see dolphins. You will see them…” He stopped for a few seconds, thinking of a word to use. After he couldn’t think of one, he grabbed a pebble, tossed it in the air and as it rotated he said enthusiastically, “THAT!”

“Ohhhh, I’ll see the dolphins jumping out of the water and doing tricks?”

The truth is that I had already planned on doing that, but he encouraged me even more to see them, especially earlier in the morning, when hundreds of dolphins are jumping like crazy. 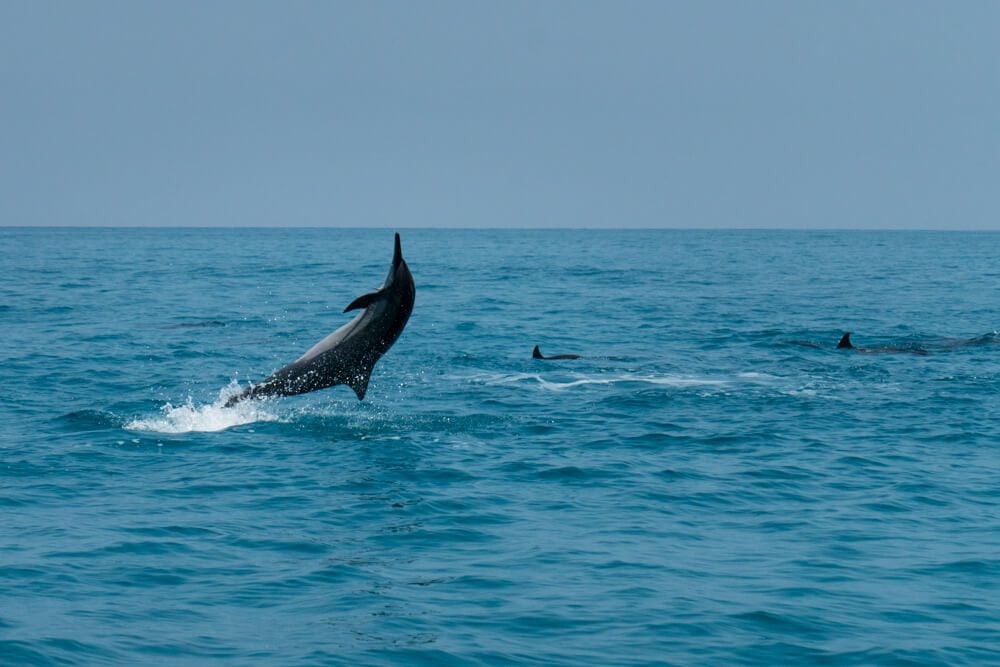 A Sunset Walk and a Weird Dinner

Abdullah went back to my camp with me and as we walked along the shore, he wanted to show me his skills as a fisherman.

He had no fishing gear. He didn’t need any, though.

He grabbed some sand and sprinkled it over the water as to confuse the squid. He slowly got closer to it and in a swift move, he grabbed it!

I quickly took a picture and just after that he released it. In less than a second the squid swam away leaving a trail of black ink behind.

We then continued walking on the water, with a stunning overcast sunset right in front of us. 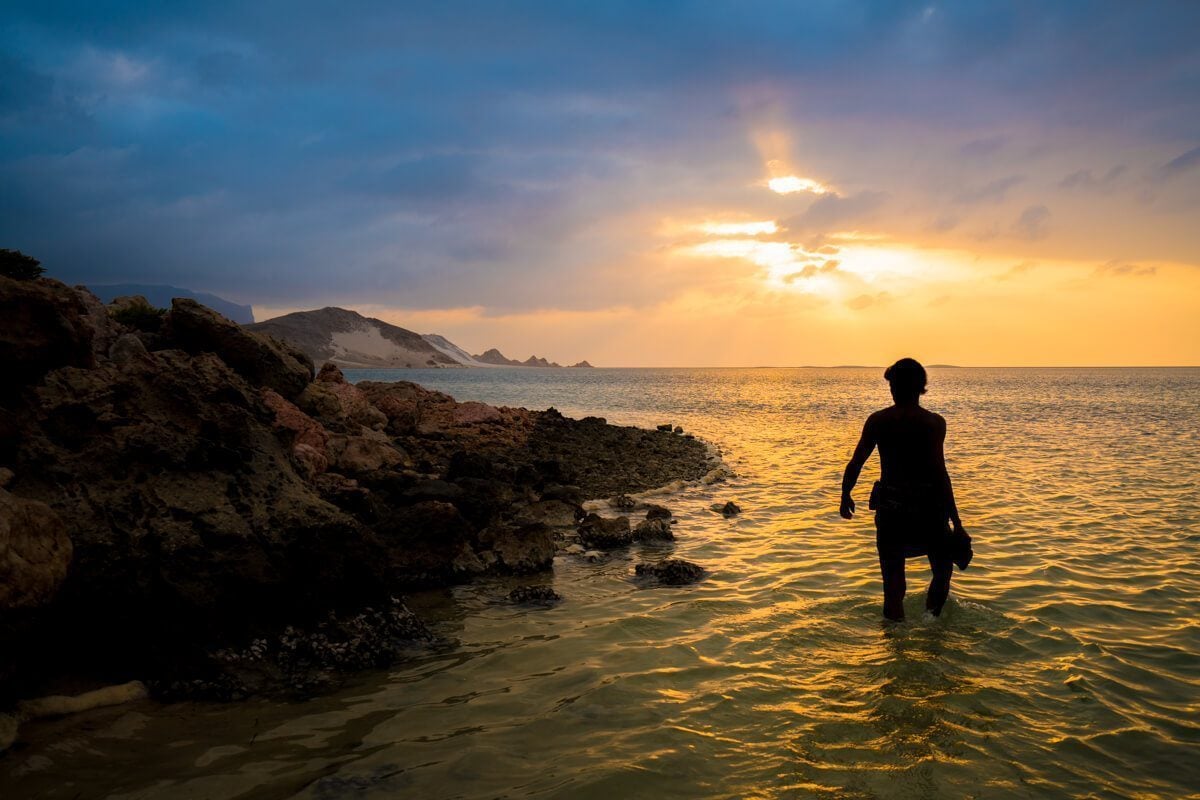 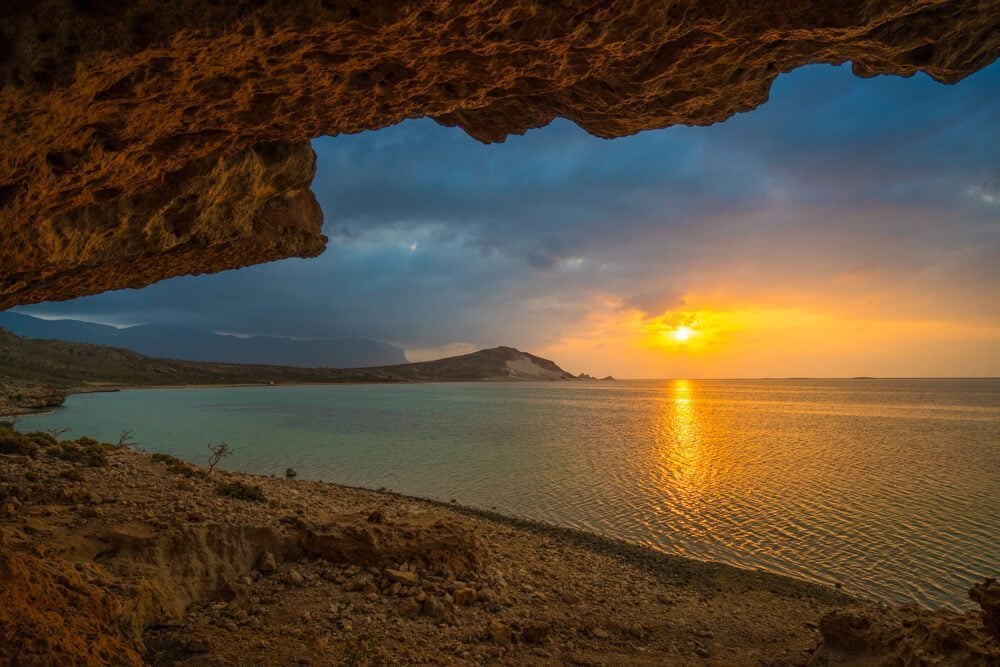 After we reached the camp, he started chatting with my driver and stayed with us for dinner.

My driver knew I didn’t like fish or seafood, so he was excited he found some other meat for me for the first time during this trip. It was goat meat.

The problem wasn’t that my dinner was goat meat. It was a goat’s head.

“Look, meat!” said my driver with a happy grin.

There were all kinds of yucky on that plate, from brains to teeth, the mandible, and the entire skull. There was barely any “edible” meat.

To make matters worse, the rice was sticky rice made with bitter goat’s milk. I tried a bite and immediately thought, nope!

I skipped that dinner but comforted myself and my tummy with a bag of cookies.

After dinner, Abdullah said goodbye to us. I thanked him for the wonderful afternoon and wished I could meet him again in the future. He made my day much better than I could have ever expected and gave me a memorable experience in Socotra.

As I’ve come to learn with other encounters in Uganda and Iran, among others, people are what make your travel experiences even more special.

I knew I was going to spend a week offline and in nature in Socotra, but meeting a real caveman wasn’t even in my wildest plans!

If you’re ever in the region, don’t be afraid to ask for Abdullah the Caveman. He is really friendly and welcomes everyone who passes by to his cave for some tea and even to have a meal if you’re hungry! 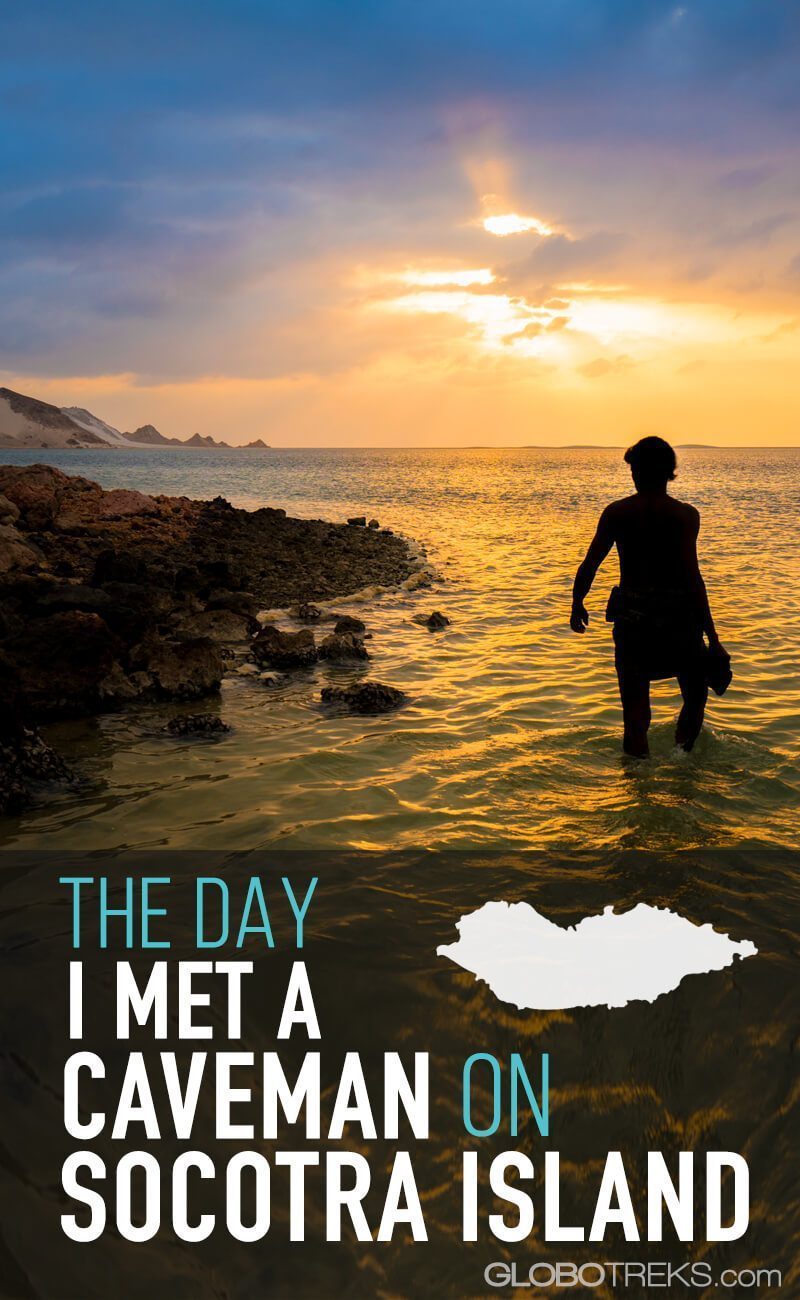