Iran was my favorite new country I visited this year. Out of 128 UN recognized countries I’ve visited in the last seven years, I can comfortably say Iranians have been some of the friendliest people I’ve met anywhere in the world.

The longer I’ve traveled, the more I’ve come to believe that people are an integral part of how you experience a country. They are the soul of the country and the reason for its uniqueness and why it is the way it is.

Unfortunately, Iran has gained a bad reputation in the international spotlight, but politics aside, I believe the country deserves a better, closer look to truly understand how wonderful it is.

While traveling Iran, I had the opportunity to interact with a lot of locals from every city I visited. Some were very brief interactions while others were more meaningful.

This photo essay is my attempt to share a glimpse of these interactions. A peek at the faces that make Iran such a friendly and wonderful destination I believe everyone must experience at least once in their life. Each image is accompanied by a brief anecdote under it. 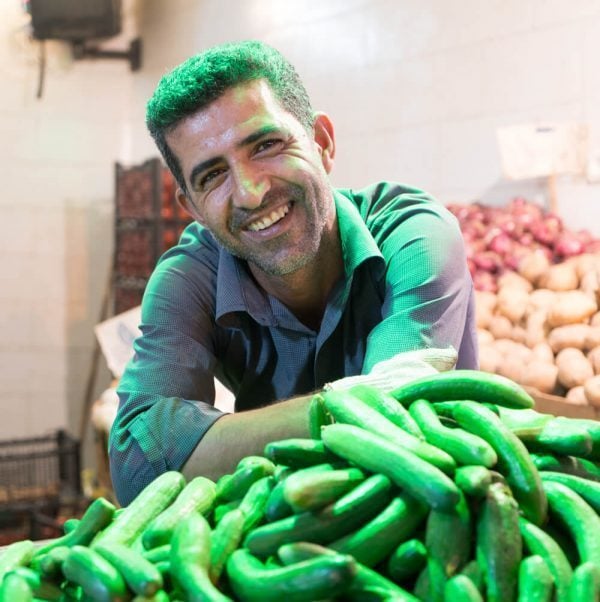 This is one of my favorite pictures taken in Iran. This man was selling his produce at the bazaar in Shiraz when he saw me taking pictures near his stall. As soon as he captured my attention, he posed and smiled to have his picture taken. I didn’t have to ask. He was so friendly and approachable. 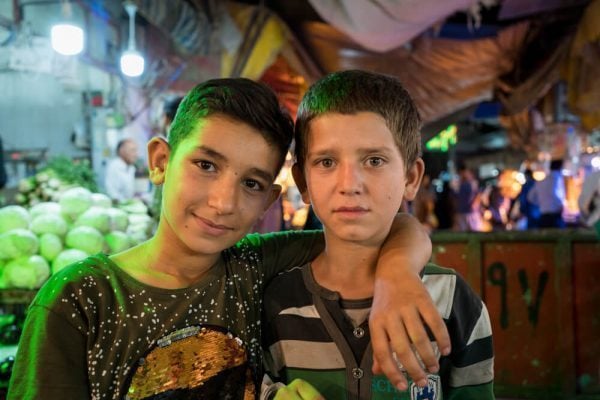 These kids had a similar approach, but they were a bit more obvious and proactive. At first, we crossed paths several times at the bazaar in Shiraz, yet neither paid much attention to each other.

Then, when they saw me take my camera out, they immediately approached me to have their picture taken. We could barely understand each other, but at least I made them smile when I showed them their pictures on the camera screen. 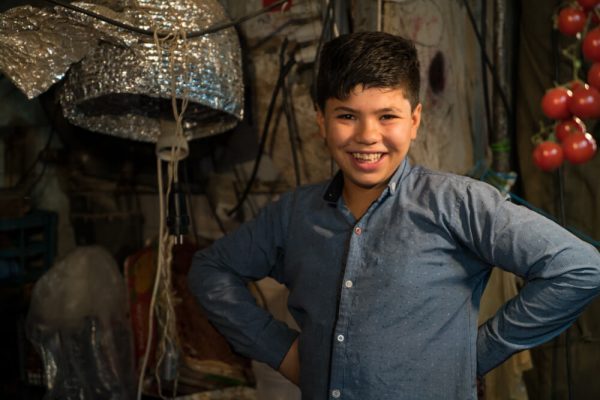 This guy was a bit shy at first, but his friends (above) convinced him to have his picture taken. Unlike the other kids who were roaming around the bazaar, he was working, selling tomatoes and other produce.

The bazaar is one of the most lively places you’ll experience in Iran. There you’ll have all kinds of interactions with locals. They will let you try and taste their products, do small talk with you out and even share about their life in Iran. 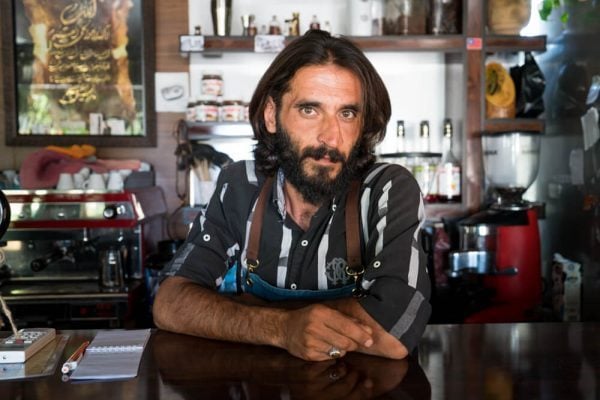 His name is Masoud, a barista in Abarkooh, Iran. I’m not a coffee drinker, so I didn’t taste his, but I’m told he does a damn good coffee.

His cozy coffee shop is called Art Cafe and is located next to the Ancient Cedar Tree which is said to be 4,500 years old. It was in this cafe where I saw the funny kidnapping sign that prompted one of the funniest misunderstandings of my trip. 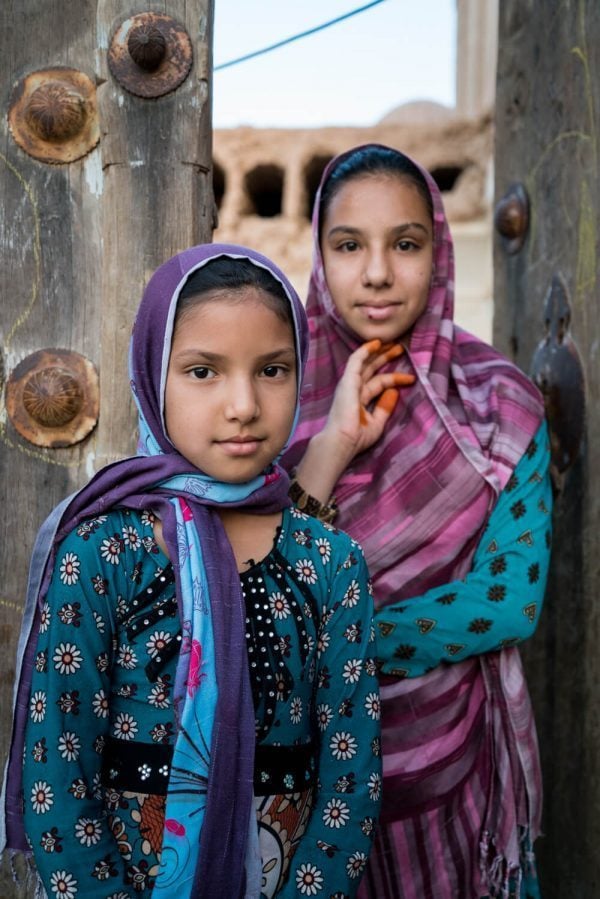 These sisters were selling keychains and small souvenirs in front of their home in the city of Yazd. I ended buying a heart-shaped keychain to support them.

While begging does happen in Iran (like in virtually every country), one thing I noticed is that many kids (and adults) do look forward to prospering by working their way up and bringing their share to the family’s economy. 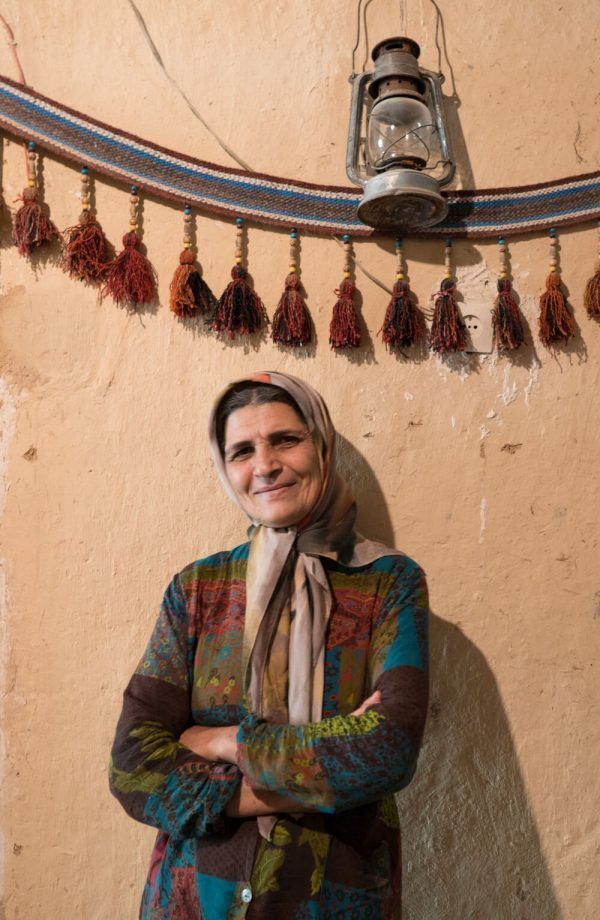 Her name is Khadijeh and she is a settled Qashqai nomad in the Fars Province of Iran. She currently lives in the Kahkaraan village with other Qashqai nomads how also settled here about 50 years ago.

While they no longer move seasonally -like some Qashqai tribes still do- they still practice some of their nomadic tradition in their daily life. Her cooking is very typical to the nomadic diet as well as her carpet weaving techniques.

We stayed one night at the home and nomadic tent (which he family still conserves), sharing stories of their former nomadic life and life in Iran, in general. She and her son, Mehdi, we such excellent hosts. 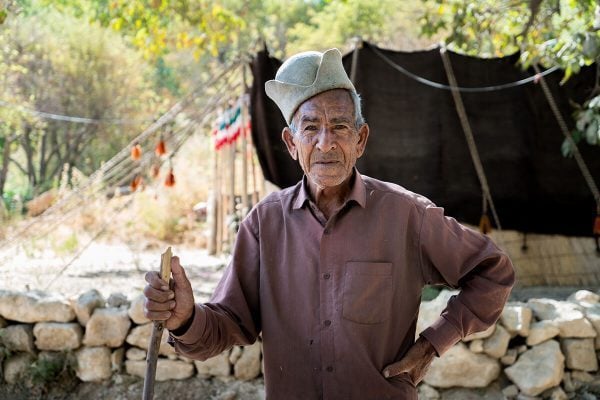 Malek Han, a Qashqai tribesman standing in front of one of Khadijeh’s tents. He was walking by and when he saw us around (non-Iranians) he walked in to say hi.

He didn’t speak any English, but his gesture was more than appreciated and par to Iran’s friendly standards. 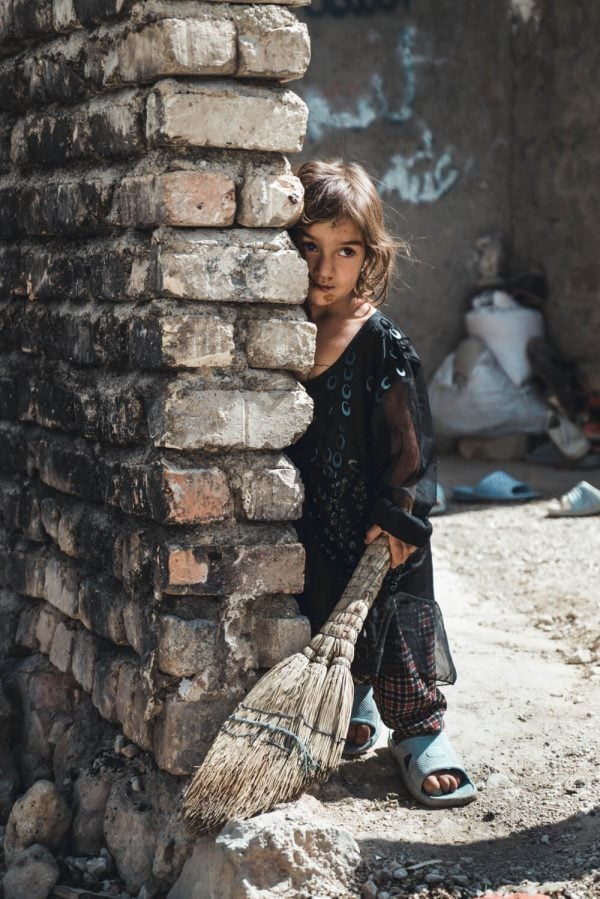 As we walked around the Kahkaraan village to see some of the semi-nomadic buildings, this girl spotted us as she played in front of her home.

She didn’t say a word and was extremely shy, but even in her shyness, she still commanded our attention by peeking from behind the wall, investigating every detail about us, from a safe distance. 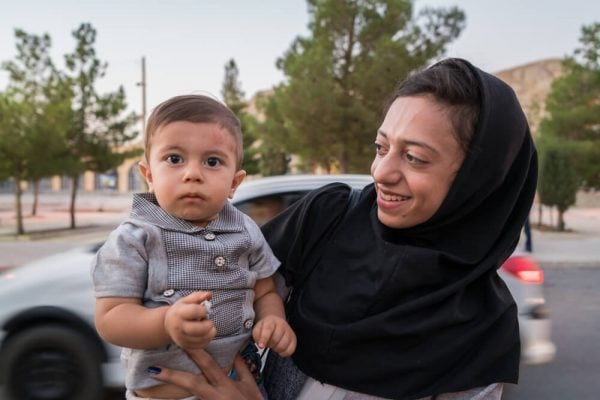 As we visited Eqlid, the city was getting ready to celebrate the birthday of the 4th Imam, Ali ibn Husayn. We walked in front of the mosque square, where some locals were playing music on loudspeakers to people passing by.

People slowed down as they drove by to greet each other and those walking could stop at the table right next to the speakers. They were giving tea and cookies to everyone to celebrate the occasion. This lady and her baby were among the crowd enjoying the tea.

She made some small talk as we slowly sipped our tea, in the Iranian style – with one sugar cube in the tea and another sugar cube in your mouth. 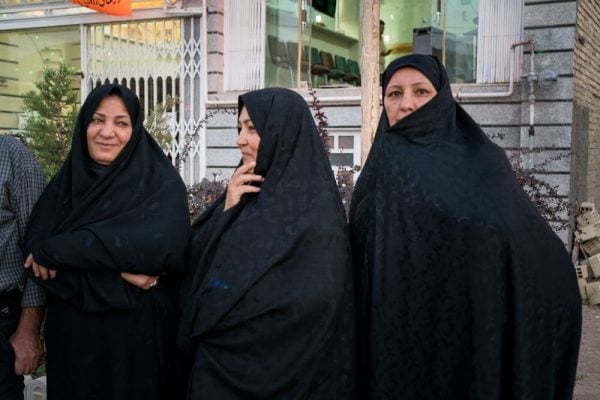 Also in the crowd celebrating were these women wearing the traditional chador. Normally these women are highly conservative and shy away from interacting with foreigners, but these women were not quite shy at all.

As we sipped our tea, one of them approached me to have a picture taken with them. I was surprised by it because this is not a common request done by conservative people, and second, I was often confused as being Iranian, so I was the least foreign-looking out of the group.

Still, I happily took the picture with them and then took one of just them. 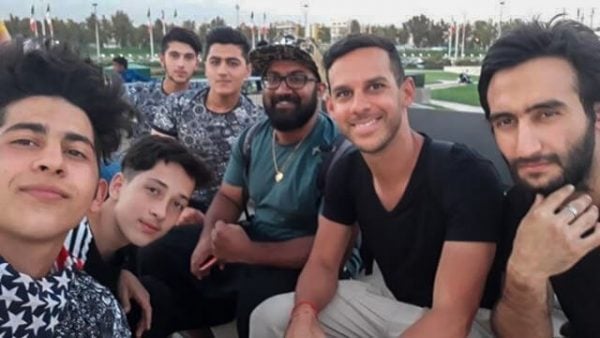 This selfie was taken by Abol (the guy to the left), whom I met at the Azadi Tower just hours before leaving Iran. He and his friends approached one of my travel companions and I as we visited the monument.

In typical Iranian fashion, they started the typical friendly-curious conversation. As soon as Abol learned I’m American, he was amazed by it and express his admiration and wish to visit the country some day.

He was even wearing an American flag bandana. He, and pretty much every other person are the real face of Iran. Real people who have real desires to have new experiences, see the world and interact with others – no matter where you are from or in what you believe. In the end, we are all looking for the same, to live a happy life.

Abol sent me this selfie via Instagram a few days after I left Iran. It was a really nice gesture. 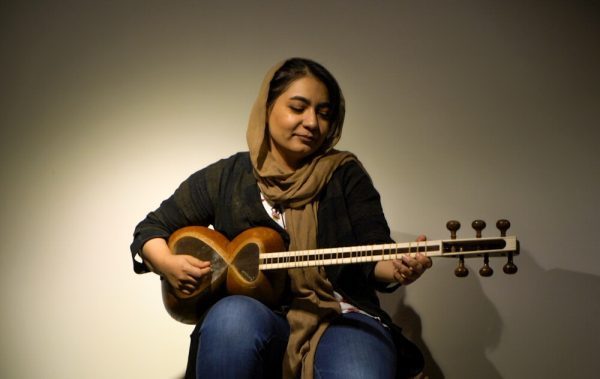 In Isfahan, I had the opportunity to see locals play their local instrument in a “semi-private” performance at the Isfahan Music Museum. This woman is playing the traditional Tar, an Iranian instrument similar to a guitar. 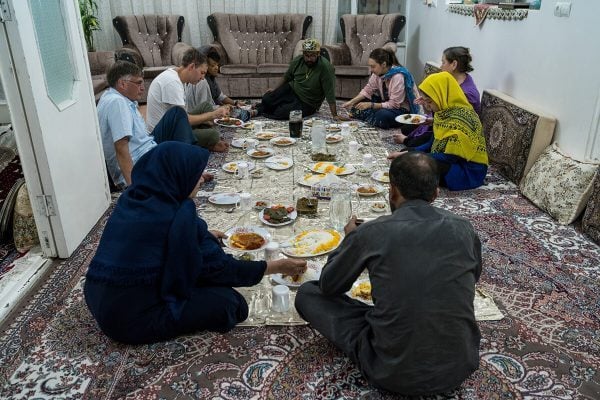 In Kashan, we had the opportunity to eat with a local family at their home. This is their traditional dinner setting. A mat on the floor with everyone sitting around it, passing the plates around as each serves their own dish. 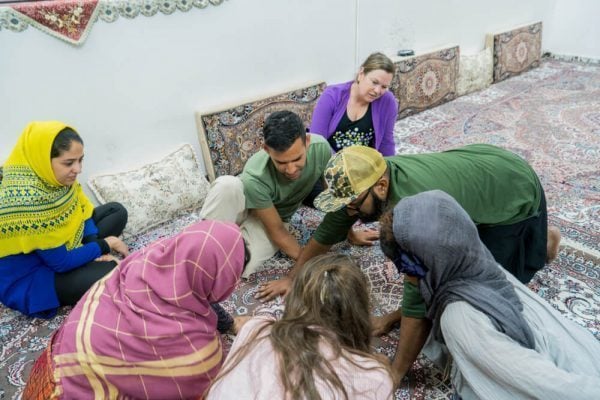 After dinner, some of the sisters in the family invited us to play a popular local game. I can’t remember the name of the game, but it involved us tapping the floor with our hands crossed. It was a fun interaction, to say the least. 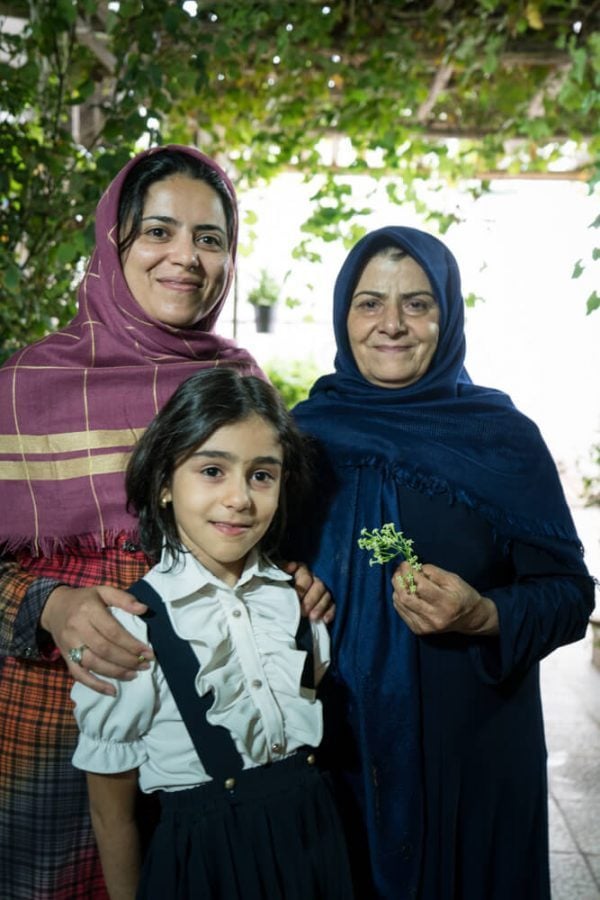 Three generations in one photo. Here are Maryam (left), Mahdiye (center), and Mrs. Moznebi (right). They are part of the family who invited us to have dinner with them. 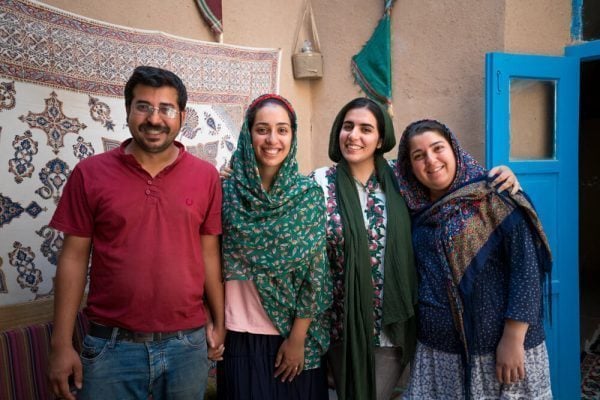 Not to be outdone on the friendliness department, a Zoroastrian family (a different religion that is widely practiced in Iran – in addition to Islam) also welcomed us to their home to have lunch with them. We learned so much about their not widely known religion as we interacted with them. 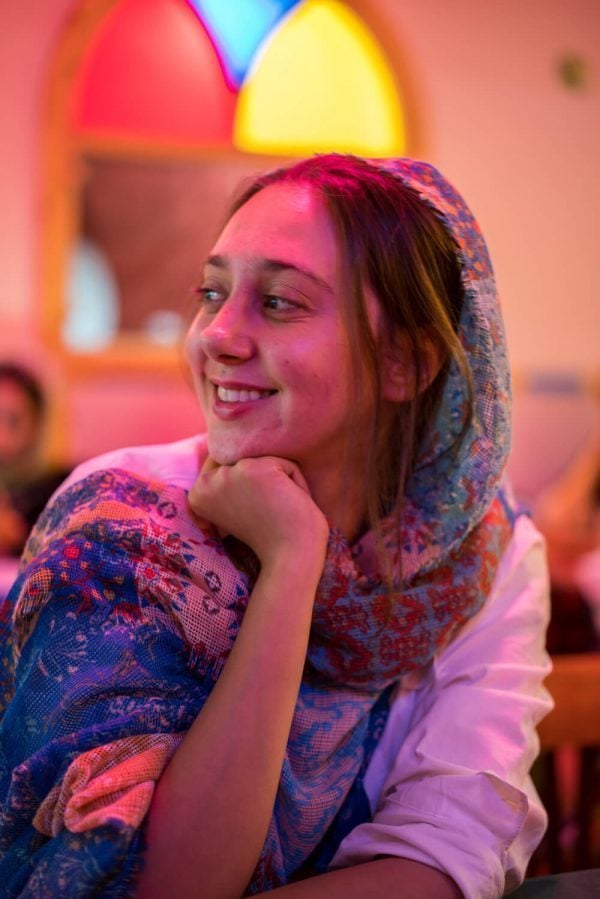 Last but not least is Nadia, my Intrepid Travel guide. Without her, many of these experiences I had and people I met would not have happened.

She was there to translate every time I wanted to talk to someone who didn’t speak English. She made a lot of introductions and bridged that gap that often exists between travelers and locals. She definitely made my trip a much better experience than I expected. 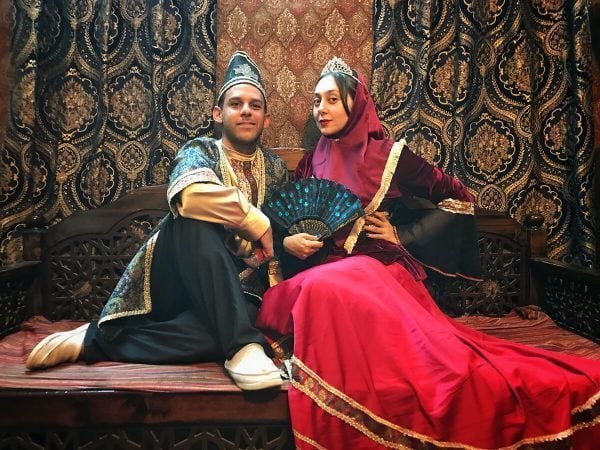 And to close with an odd picture, here’s Nadia and I taking a birthday picture together. It just happened we both have our birthdays one day apart and they happened to be during the trip, so we both decided to do a joined birthday celebration.

Nadia suggested taking a picture of us dressed in traditional Iranian costumes and print that picture on the cake (you know, the same way mom’s do with their baby’s first-year cake).

Apparently, this is a popular thing in Iran now (for grown-ups), so even when I found the idea cheesy, I happily went with it. When in Iran, do as the Iranians do!

The cake was so good, by the way! 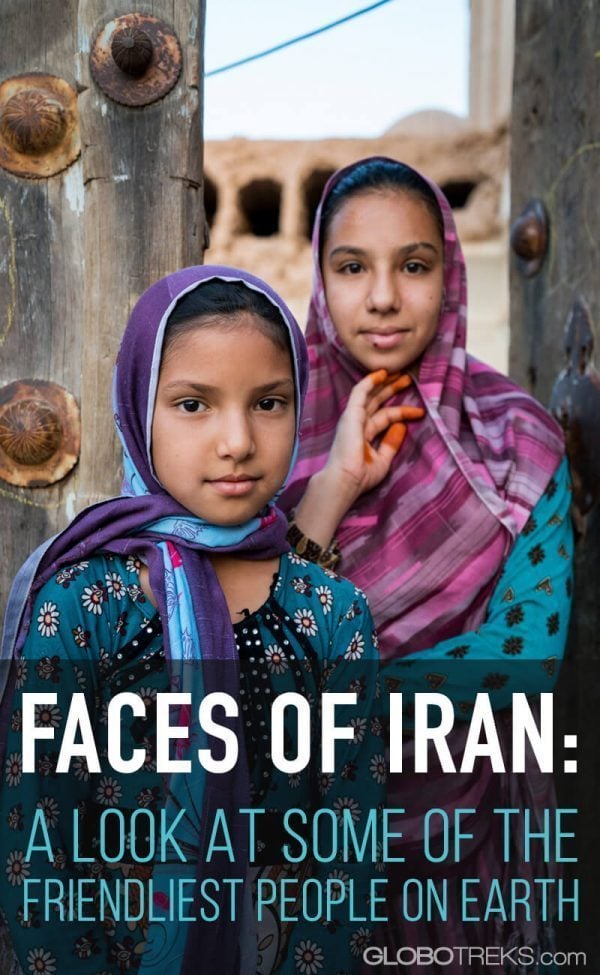