I’m sitting on a bus, looking out the window as we cross the desert in Turkmenistan. Dark blue and purple hues paint the sky in the evening twilight. But suddenly, a bright orange spot starts glowing in the distance.

Just seeing that speck of light fills me up with excitement.

The closer we get, the brighter it glows. What was a dot of light moments ago is now a giant crater with fire coming out of it. At last, we get off the bus, and without any hesitation, we walk straight to the fiery pit.

I’ve finally made it here. I’m at the Gates of Hell. 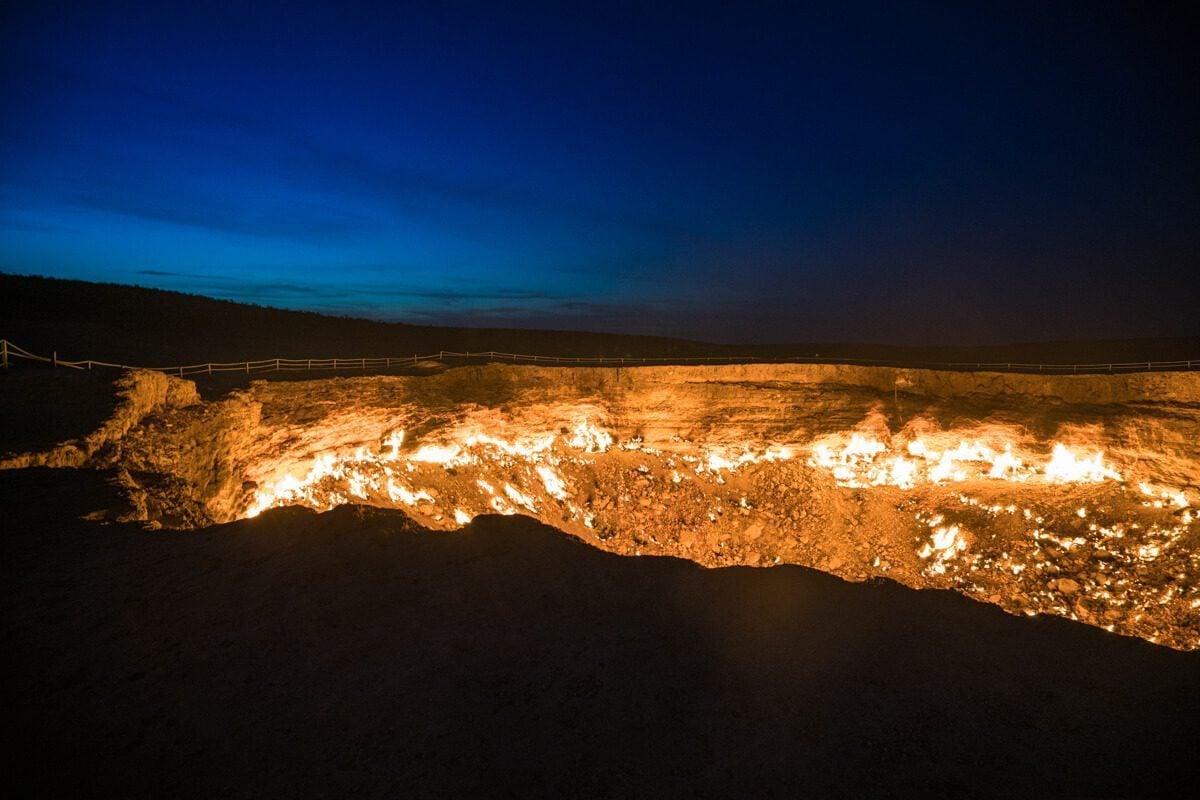 I’ve had a fascination with this unusual fiery crater for years, and now I’m finally able to visit it on this Intrepid Travel trip.

Now that I’m here, I can say that the years of waiting were worth it. Pictures don’t do it justice.

Nothing compares to the feeling of being in the Karakum Desert in Turkmenistan, standing right on the edge of a giant fiery crater while admiring the glow of its eternal flames. 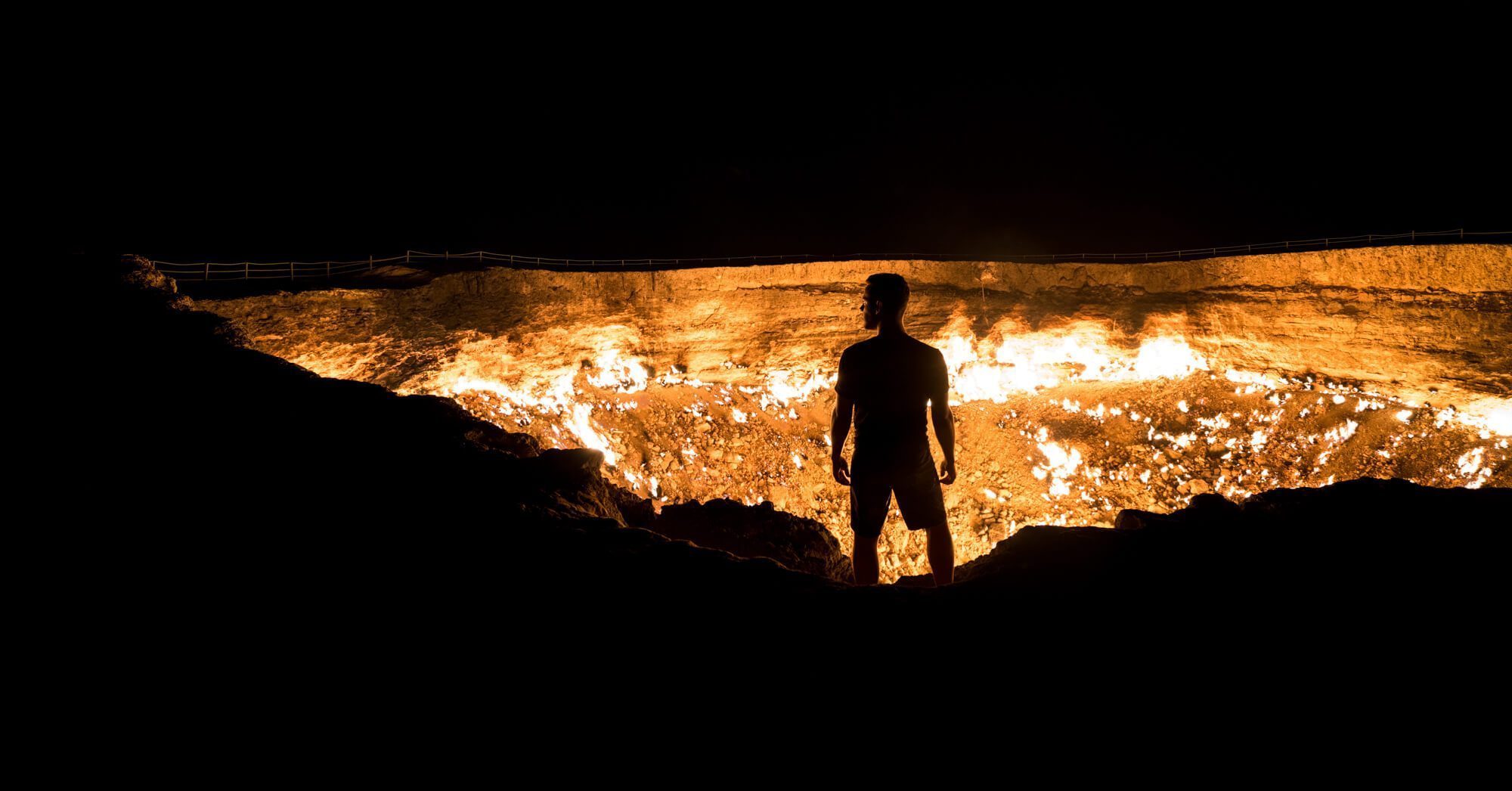 I feel the hot air rising with a hint of methane warming my face and hands, while the cold breeze of the night cools my back.

As I stare into the fire, I can’t help but think of how this place came to be.

Officially known as the Darvaza Gas Crater, this geological sight is, in fact, a collapsed natural gas field.

The 226 feet (69m) in diameter crater was created in 1971 when a Soviet drilling rig accidentally hit a massive underground natural gas cavern, causing the ground to collapse 65 feet (20m) into the earth.

Intending to avoid an environmental disaster due to leaking and spreading of methane gas, Soviet geologists intentionally set the crater on fire, thinking it would stop burning within a few weeks. But, they failed to take into account that this is one of the largest gas reserves in the world.

Almost 50 years have passed and the crater still continuously burns insane amounts of methane daily. And, there’s no sign of it burning out any time soon.

Thanks to its everlasting fire, locals now refer to the Darvaza Gas Crater as the Door to Hell or the Gates of Hell. 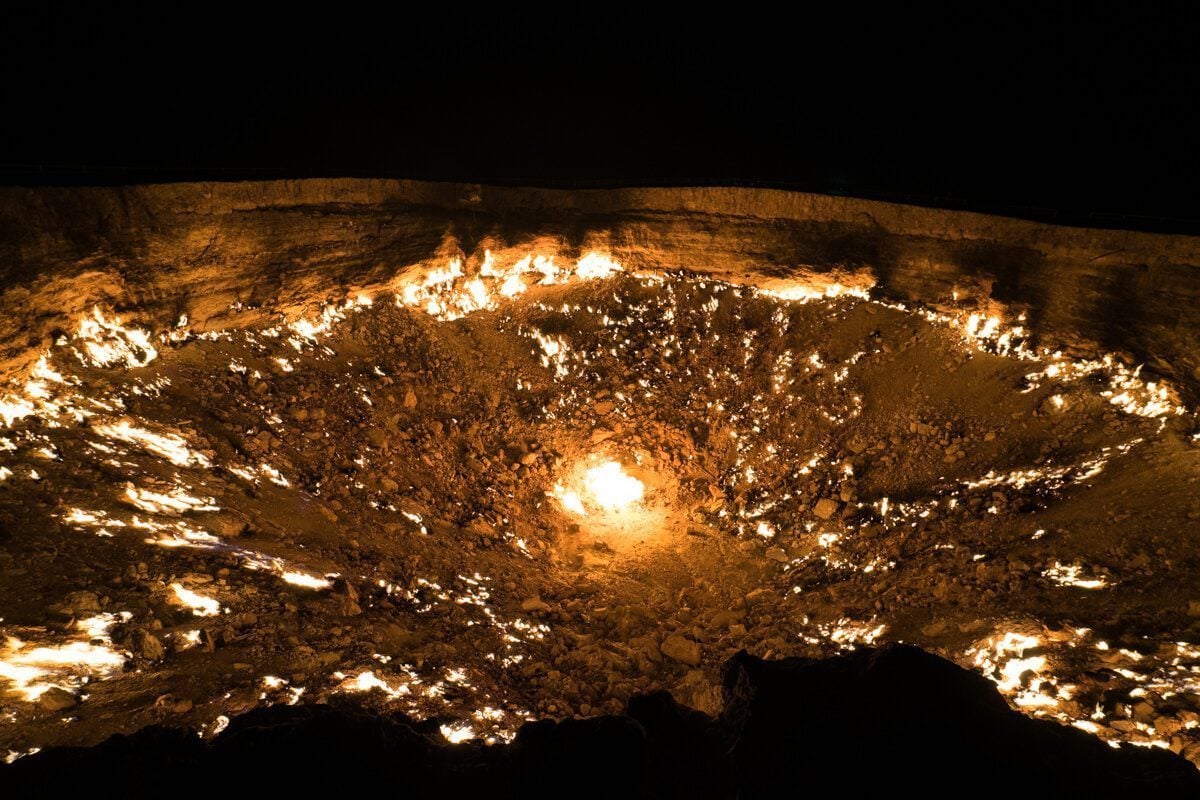 My first peek of the crater is a quick one. First, I must drop my stuff in my camping tent and join my fellow travelers for dinner, just a few hundred meters from the crater.

We will all spend the night here to admire the starry, moonless desert night and the contrasting for hours on end.

It’s dinner time and I sit looking towards the crater glow in the distance. Bite after bite, I can’t stop staring at it. I’m anxious to go back. I want to see more of it, photograph it, and feel the heat. 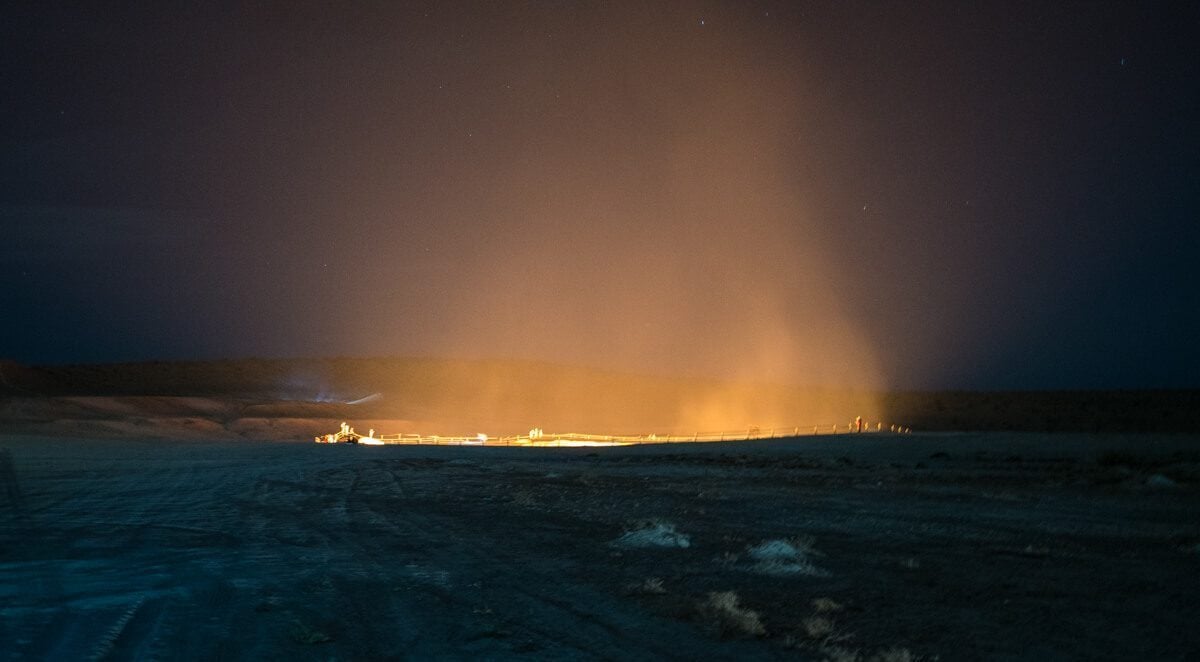 After dinner, we all walk back to the crater as a group, and again, we all admire it in our way. Some just stand to watch the flames while others get ready for the photo ops. I’m doing both.

We all help each other with our soon to be Instagram and profile pictures. Who knew a fire crater could be so visually appealing?

Time passes as slowly a few people head back to their tents. It’s been a long, tiring day. I, on the other hand, stay behind. The more time I spend here, the more the crater belongs to me. 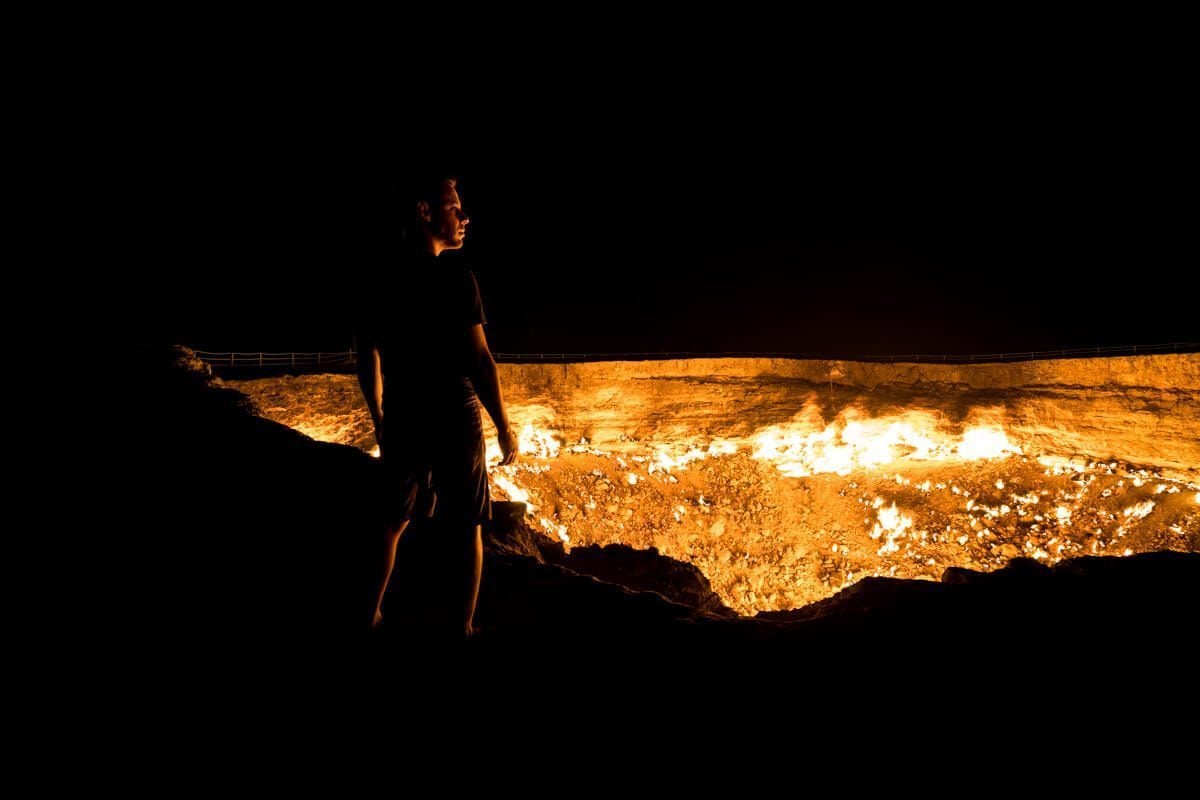 Finally, the crater is all mine. Not another soul stands by it. I sit by the rim and just look at it the same way as when I laid eyes on it for the first time.

Around 11:30 pm I head back to my tent to rest. I plan on waking up first thing in the morning to see the sunrise from the crater. To my surprise, my guide Ali and a few other travelers are still chatting and drinking vodka.

Of course, this is Turkmenistan, you drink vodka wherever you go.

I join them for a bit.

It’s 5:30 am, and as much as I’m not a morning person, I’m excited to get out of my tent to face the cold morning. At least, once I get to the crater I’ll be warm again.

Again, I’m the only one at the crater. It’s the morning twilight and the hues of purple and blue start painting the dark sky, contrasting the fiery reds and orange in the pit. 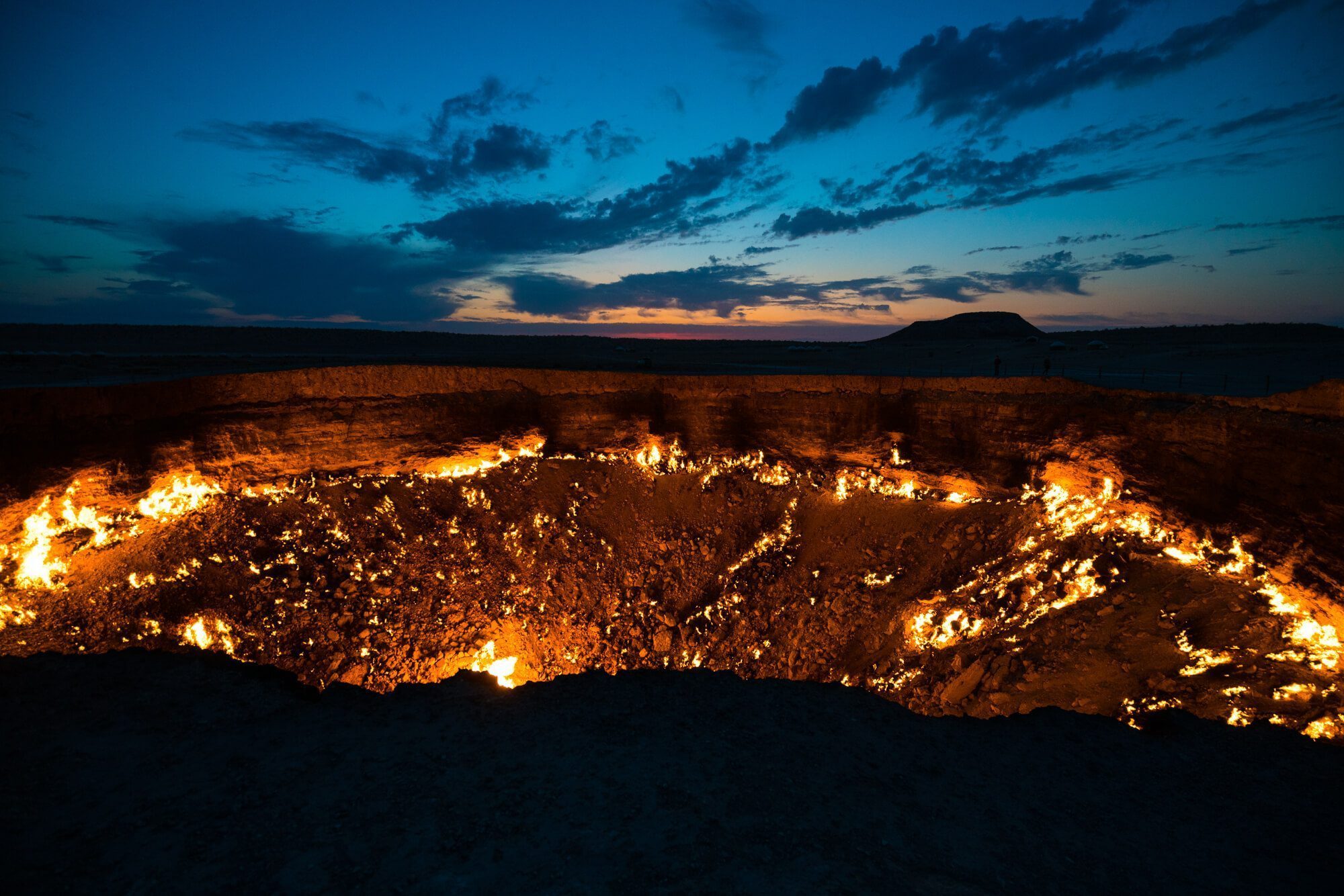 Seeing the sunrise by the crater adds to the surreal feeling that this is not an ordinary place, nor an ordinary experience. And again, it is all mine, at least for a while.

As the sun rises, other travelers join me by the crater to admire what we know will be an unforgettable sunrise. 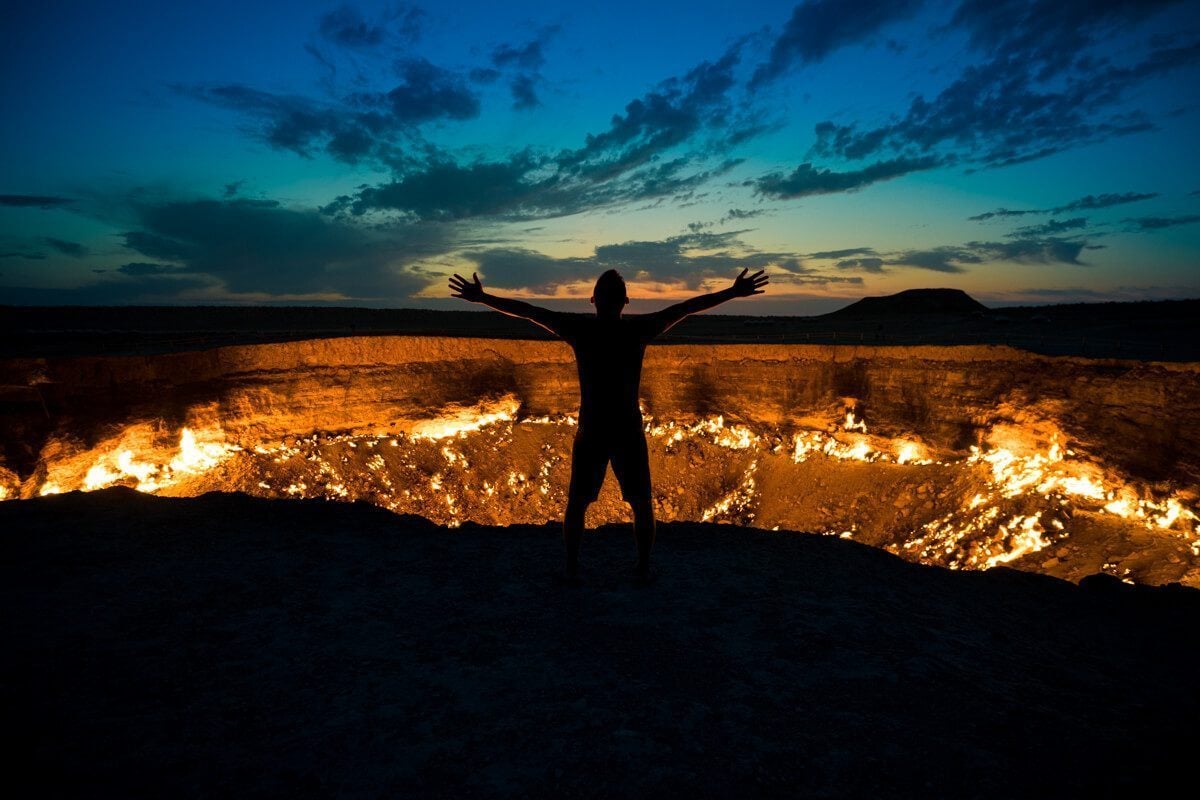 Around 7:00 am we all leave to see the other two craters in the region. While the Darvaza Gas Crater or Gates of Hell is the famous one, there’s also the Water Crater and the Mud Crater.

The Water Crater is also a methane gas crater, but instead of fire, it is filled with water.

Standing at its rim, I can see how the methane gas bubbles through the water, escaping into the air and giving that faint smell of gas.

The Mud Crater, on the other hand, has boiling, bubbling mud and fire. It is a less fiery version of the Darvaza Crater.

After those two extra stops, we all hop on our bus to head to Ashgabat – the strange white marble capital of Turkmenistan. It’s a long 4-hour journey ahead, but none of us mind. We’ve just been at the Gates of Hell.

Turkmenistan, while safe, is not an easy country to travel. Due to its dictatorship and isolationism mentality, Turkmenistan still heavily restricts tourism there.

Turkmenistan is one of the most closed countries in the world, so very few foreigners are granted a Turkmenistani visa. It receives less foreign tourists a year than even North Korea!

Due to this requirement, their visa process is still pretty backward and antiquated.

For their visa, you first need a Letter of Invitation (LOI). This you can only get via a tour company. I visited Turkmenistan with Intrepid Travel and they made getting the LOI process so much easier.

You can read more about my trip to Uzbekistan and Turkmenistan with Intrepid Travel.⠀⠀⠀⠀⠀⠀⠀⠀⠀⠀⠀

Getting the LOI can take “forever,” so I recommend booking your trip at least two months in advance. All my travel companions and I got our LOI roughly a week or mere days before our trip (and we all requested the LOI months ahead).

You’ll finally get your visa at the border or airport when you enter Turkmenistan. Be ready to spend at least two to three hours at the border just to get this piece of paper. 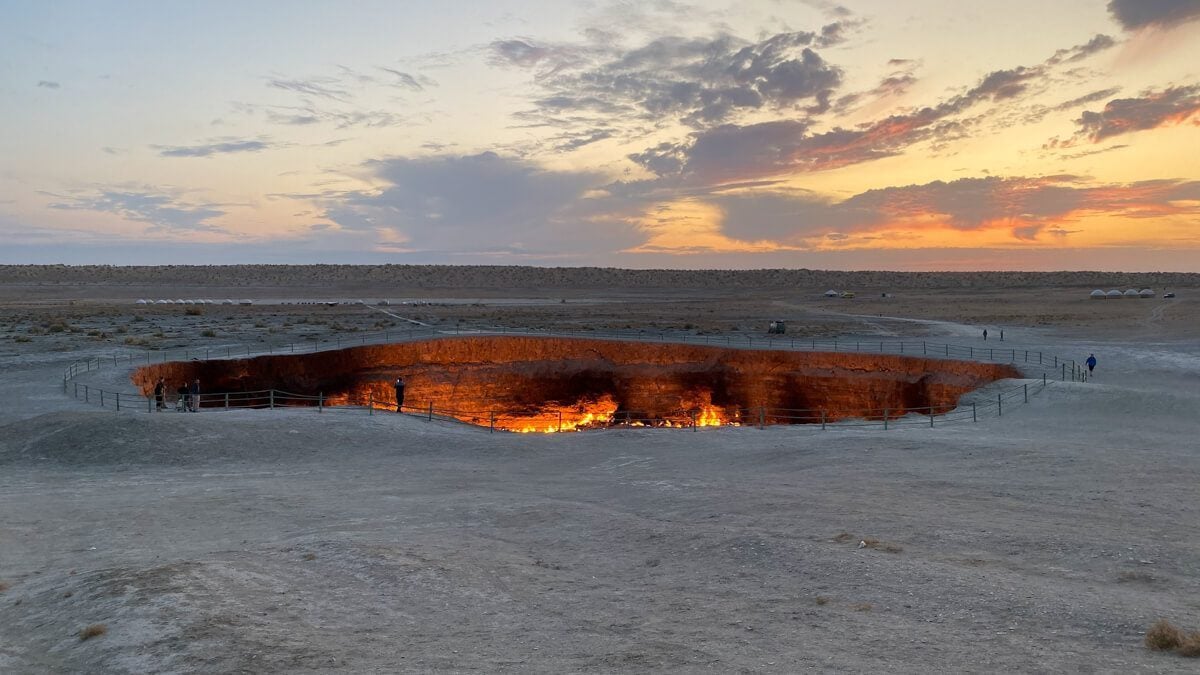 The only exception to needing a tour guide to get a visa is if you’re traveling with a transit visa for 5 days or less –including your entry and exit days– or if you’re only staying in Ashgabat. In those cases, you can travel solo.

Since the Gates of Hell are 160 miles (260km) north of Ashgabat, most people won’t be able to reach the Gates of Hell on their own. Renting a car in Turkmenistan is impossible at the moment as self drive is forbidden in the country.

Thus, you’ll most likely need a tour guide to reach the crater. That is, unless, you’re entering the country with your car, like when doing the Mongol Rally!

Don’t forget to register with the government

If you’re traveling solo and spend more than three working days in the country, don’t forget to register with the State Migration Service (SMS). There are SMS offices in Ashgabat, Dashoguz, Mary, Turkmenabat, or Turkmenbashy. Failure to register properly can result in fines, arrest, and/or deportation.

If you’re traveling on a tour, they will do this for you, so don’t worry about it.

Given that Turkmenistan has an official exchange rate and a black market rate, I recommend not withdrawing money there. Instead, exchange your brand new, crisp USD in the black market to get the best rate possible.

To have an idea, the official rate makes Turkmenistan relatively expensive or outrageously expensive when it comes to imported products. Have you heard of a $30 can of Heineken? $5 with the black market rate makes it more reasonable, no?

Of the two options, of course, the best one is camping as you get to spend more time next to the crater. The day trips don’t spend enough time there, in my opinion.

Careful when standing close to the crater

There’s a fence around the crater, but you can jump it at your own risk if you want to take better shots. Be careful getting too close to the rim as the earth there is very loose. Don’t kill yourself for a selfie!

You must get travel insurance to travel Turkmenistan. I recommend WorldNomads. They are great and are designed for this type of adventurous trips.

The internet is heavily controlled in Turkmenistan (like in any typical dictatorship). Most social media is blocked there as well as many other sites like YouTube and such.

VPNs are a hit and miss in Turkmenistan, based on my travel mate experiences, but I used ExpressVPN and it worked well for me. Ali, my local guide, also uses ExpressVPN.

Ready to visit one of the most surreal places in Turkmenistan and the world?! 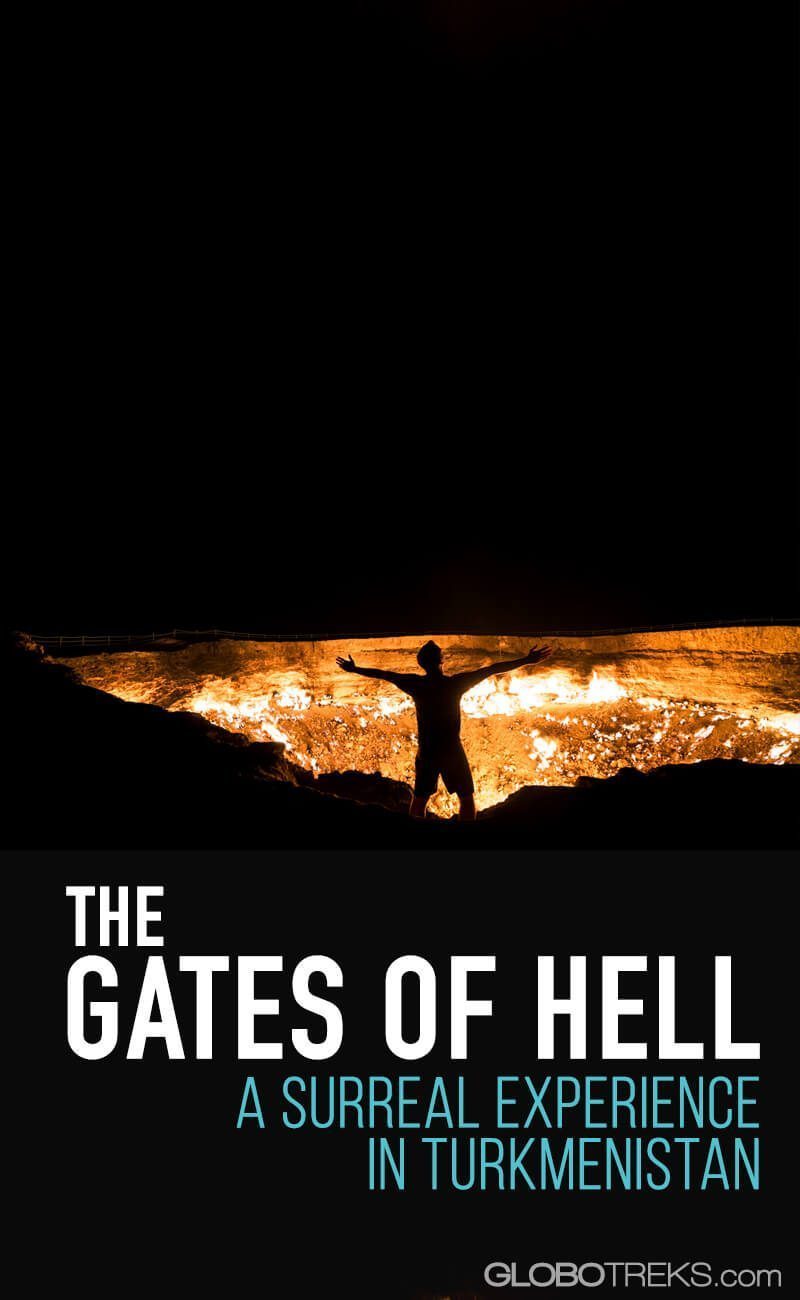