I was dropped in front of a two-story home filled with a solemn crowd and half dozen chickens walking on the grounds.  There were piles of pieces of raw meat thrown over a layer of banana leaves on the floor and a lineup of pots sitting on an open fire; preparing what seemed to be a culinary feast. 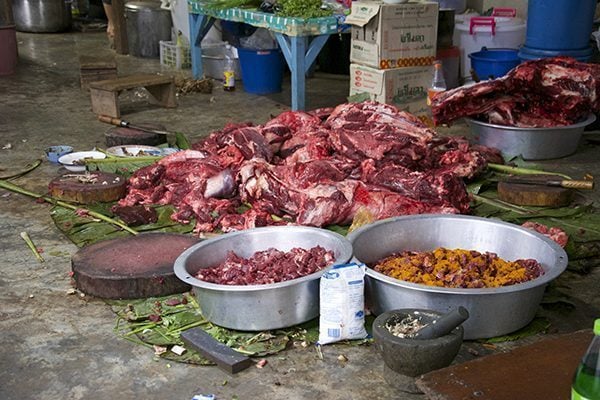 This was supposed to be just a quick pit-stop on my way to the Karen Hilltribes, but upon seeing what was happening, I decided to stay longer.

This was Lao San’s home, one of the eldest in the small Mae Haw Hmong village near Mae Sariang, Thailand. He was dead, and this was his funeral. 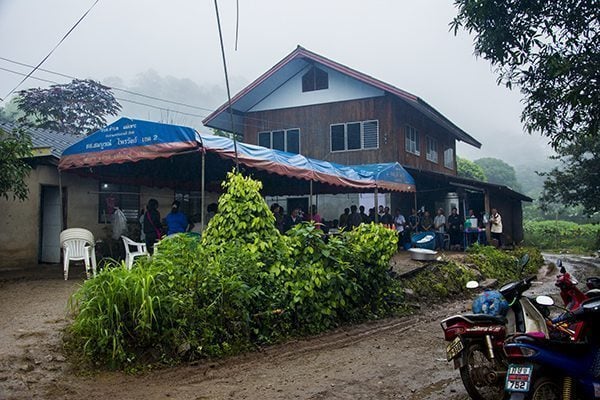 At 117 years old, Lao San was one of the eldest in his village. He is originally from Laos, hence his name Lao San. He was highly respected and loved by everyone, yet this was no traditional Hmong funeral.

The Hmong are either Buddhist or pray to their own spirits, and traditionally, they culminate the funeral by cremating the body. Lao San, on the other hand, converted to Christianism when he was younger. He was to be buried.

While not popular, it is not uncommon to find Christian tribe members (Hmong, Lawa, Lahu, Karen Tribes) on the northern hills of Thailand.

About 50 years ago, there was a Cultural Revolution in China that forced several persecuted missionaries escaped to Burma (Myanmar). As I was told, those missionaries were kicked out of Burma and relocated in Thailand instead. Whether kicked or moved at will, that migration set a new religious precedent on the northern tribes of Thailand.

Lao San, being a Christian, will not receive all the traditional ceremonies most Hmong people get, but still, he will get the proper and respectful funeral he deserves, blending his Christianity with his cultural traditions. 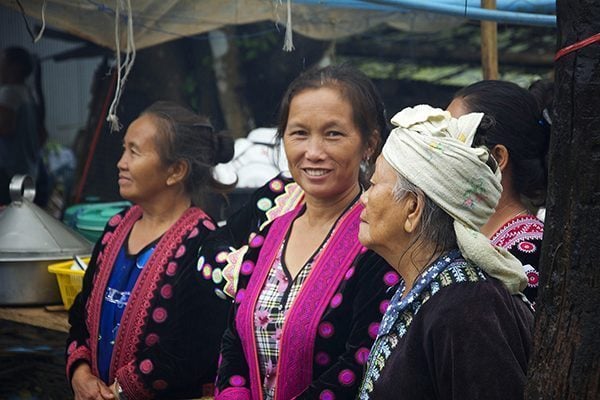 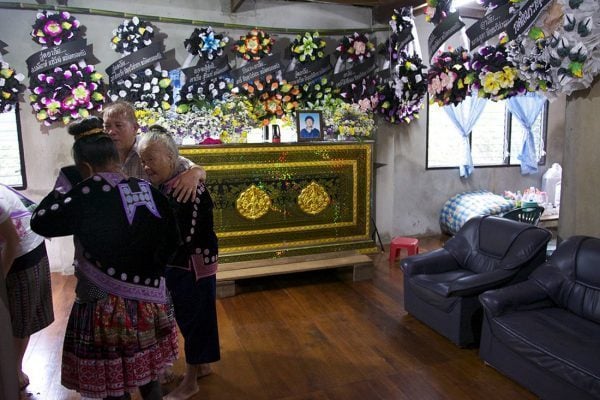 I entered the room where about a dozen people stood in a semi-circle, singing hymns in Thai and in Hmong dialect. In front of them there was a box; a big box. It was decorated with flowers, funerary arrangements, and identified with a picture of Lao San.

It was his coffin. But, this was no traditional coffin. This was a cooler. Friends and family passed in front of the cooler, stood on a small stool, grabbed a flashlight, and lit the inside of the cooler through the small glass opening on the top to see Lao San and say their last goodbye.

I didn’t know Lao San, but it was my time to pay my respects like everyone else. I looked through the glass to see him lying peacefully, as in a deep sleep; all dressed in his traditional Hmong clothes. 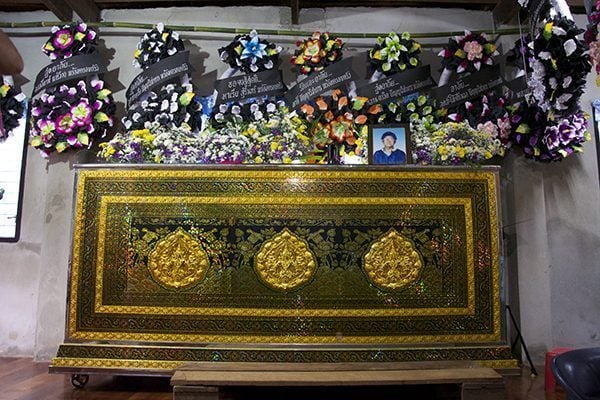 It’s been four days since he died, but he will be buried later today. Traditionally, Hmong give four days of mourning for friends and family to reach the funeral. They are coming from all around the region, and even from Laos.

Every day they perform two ceremonies –just like the one I witnessed– one in the morning and one in the evening, in order to accommodate people as they reach the house. After the last morning ceremony on the fourth day, the body is ready to be buried. 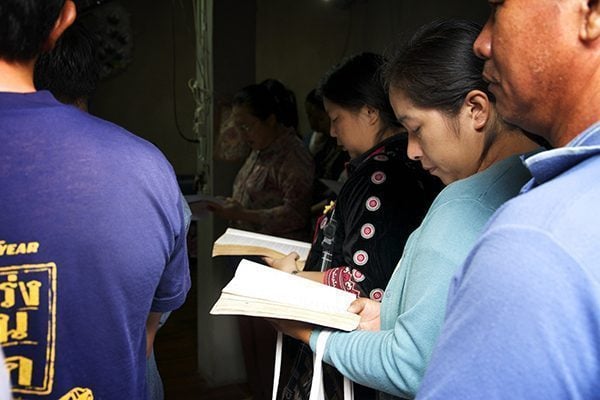 While buried under traditional Christian beliefs, what preceded the burial was performed under Hmong spiritual beliefs.

After paying my respects I left the room and stood out close to the kitchen where the piles of meat where lying on the floor. I wondered why so much meat was laying on the floor, just like that; with countless flies roaming buzzing around it.

It was not meat bought on the market. Some animal had been killed there. A big animal. There were bones, ribs, legs, and a lot of bloody meat. Then I finally realized… it was a cow.

I learned through the locals that on the last morning of mourning, before the burial, a cow is killed as an offering to the dead. Thankfully I missed seeing the actual sacrifice.

That meat is cooked on an open flame the following day and offered to all the people who helped with the funerary arrangements. A cow like this can cost 40,000 Bahts (around $1,250), as I was told. 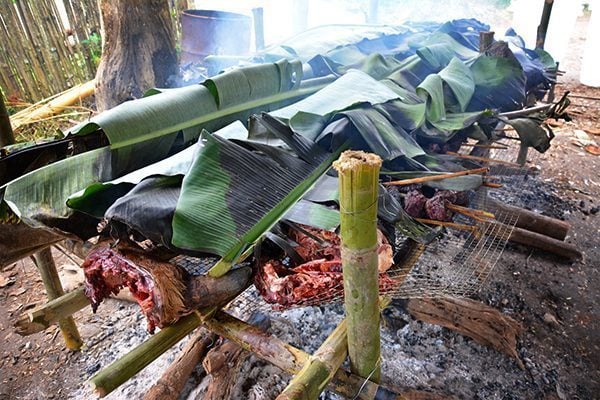 When it is time to bury the deceased, the Hmong walk to an open forest or land and throw an egg on the floor to see where the spirit of the dead wants to lay rest. If the egg breaks, the body is buried there, if it doesn’t, then they move to another location and bury it wherever it breaks.

This has been practiced for a long time, though as I learned, these days they don’t practice it as much due to the government’s protection of several forests and lands around the tribal villages. These days, they have the option to decide whether to get buried at all, and if they do, it is often in their fields.

Based on his spirit’s decision, Lao San was buried in a field, though not his field.

He was buried with feet lower than his head, head facing north, and only with his traditional clothes. A cross stands on top of the dirt ridge, where his feet lay 7 feet underground. 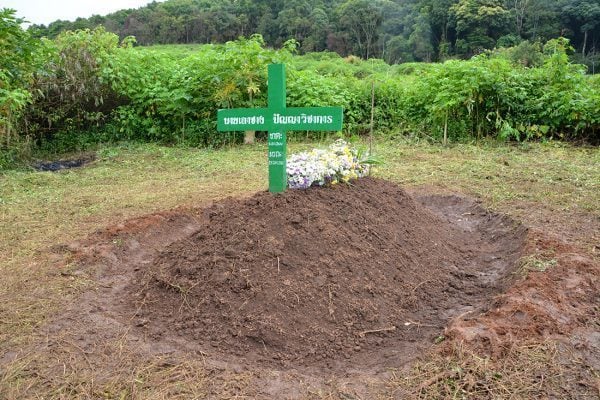 Most burial ceremonies end here, but not for the Hmong. Three days after he is buried, people visit his home to pray for three days. “Why three days?”, I asked.

The Hmong believe the soul lingers for three days, missing his family and the life it used to have. It takes three days to let go and move to a better place.

I just experienced one of the most elaborate, yet most humble, funerals I’ve ever seen. I didn’t arrive to Lao San’s house with the intention of taking part in his funeral, but unexpected experiences happen all the time while on the road, and this one was a beautiful way to see a spiritual and cultural side of the Hmong I wouldn’t have gotten otherwise.