The north of Thailand, in my opinion, is the rich cultural region of the country. Throughout the last two centuries, a hodgepodge of cultures migrated from surrounding countries –even as far as China– to find a safe haven from political or economic turmoil happening in their country at any given time.

The Karen people, who migrated from Burma, now call the mountainous northern region of Thailand their home and have done it for several decades now.

I’ve been fascinated with the tribal villages in Thailand since my first visit in 2008 and always looked forward to interacting closely with them to learn a bit more about their lifestyle and individual story.

I finally had the opportunity to do this when I visited a few of their villages in the Mae Sariang region and had what I now consider is an unforgettable homestay experience.

Introducing Myself to the Culture

The morning came and Piak, my Karen guide, picked me up at my hotel to start my homestay experience, which would take me through several hours of hiking and numerous stories from the locals.

It all started simple, with quick stop at the local market to pick some snacks for lunch. And by snacks I mean not your typical mass-produced snacks. These were fried chicken, deep fried fish, and other local favorites.

Immediately after, we drove 18 miles out of Mae Sariang until we reached the village where Piak lives. While his village has easy access to the road, it still looks like a village that could have been set miles deep in the forest.

There were bamboo houses raised on concrete or wooden stilts with a very basic layout, and on many occasions, just a single interior room. Domestic animals like pigs, chickens, and even buffalos live beneath the houses.

Piak’s house, which is just what I described above, would serve as my accommodation for tonight, but we would not go there yet. First, we met a few of the locals, including a young lady who was weaving a skirt in the traditional Karen way – with a rustic wooden “machine.”

She showed me the basics of how to weave in their style, but as simple as it might have been, that is a science too complicated for me. 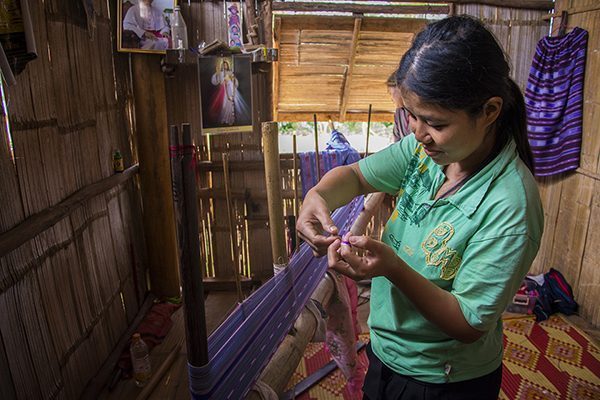 That short and impromptu weaving lesson was followed by a hike Piak described with the following sentence, “we are going to walk a lot today.”

Hiking to the Heart of Mae Sariang

I love hiking and I do it often, so I didn’t think it would be a great deal. Yes, it turned out it was a longer than expected hike, but it was soooo good.

The sun was high, yet hidden behind the clouds, giving a nice temperature and sporadic gentle gusts of wind. The terrain, on the other hand, was quite muddy due to the rainy season.

Along the way, Piak pointed here and there towards some of the most curious and important plants and trees that abutted the trail. He knew everything about them. He uses them on a daily basis for home remedies, treatments, and even for food.

After about an hour or so, we stopped in the middle of a dry rice field. There was a single refuge building made out of tree trunks and palm leaves. Smoke came out of it as if something was burning inside.

Indeed, it was our lunch. We went inside the refuge and sat on a low bamboo platform. We were 7 people in that small space: the rice field workers, Chalamo (Piak’s mother in law), Bo (Piak’s aide), Piak, and me.

Among the workers, there was Muga La, who Piak introduced very curiously. Before even seeing her, he said, “you will meet a lady who is not married, but don’t worry, she is ok.”

Why would I worry about a lady who is not married? That’s not how I (and most of the western society) think, but in the Karen society (among other tribes), marriage is very important.

Turns out Muga La is from a clan no one wants to marry with. They say they have “bad spirits,” so if you marry any of them, you will die.  “She’s magic, like vampire,” Piak finished with.

Piak followed with, “don’t worry, we will be fine. I have this to protect us,” as he grabbed a thin strand and a silver piece hanging from his neck.

While I didn’t speak directly with Muga La, I can say she looks like a sweet lady and that she cooked a really nice lunch with rice, fish, and veggies. 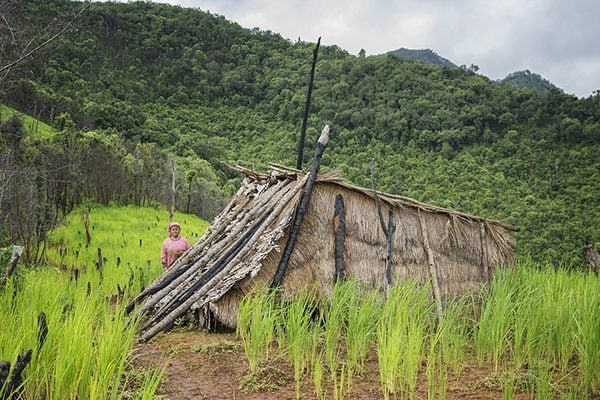 Our brief lunch break was done and no spirits were harmed (that I know of). We continued our hike even deeper into the mountains to pass through wet rice fields, lush forests, and finally, the goal of our hike; an authentic Karen village. 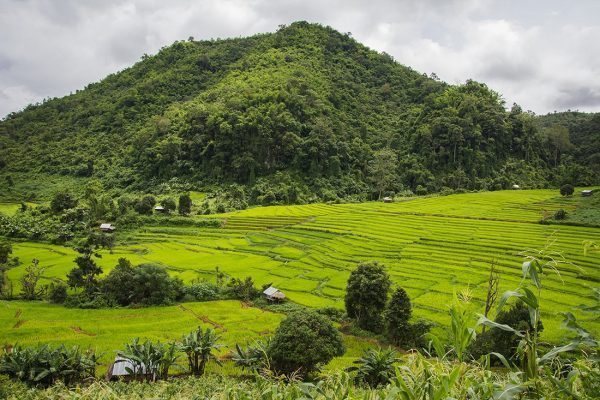 The Karen Village, Mocomo, and the Japanese

This village has no toilets and in general, no electricity – save for a few dusty solar panels. There is an elementary school that serves a handful of kids of all ages, but the rest is simply small bamboo houses.

As we strolled around to meet a few locals, the kids came out of school and crossed our paths. Upon seeing my foreign face and camera, they all ran out as if I was a ghost.

I marveled at the lady preparing pig’s food with a traditional pylon, at the grandfather taking care of his granddaughter, at the mother cooking at the fireplace while carrying her baby. I simply took it all in. Every experience, as rustic and simple as it might have been.

My favorite encounter of all was with Mocomo, who shared her interesting story of her life during the Japanese take over of her village and how she fled to survive.

During World War II, when the Japanese occupied the region, long-term tensions between the Karen and Burma turned into open fighting. Inevitably, those tensions crossed the border towards Thailand. As a consequence, the Japanese destroyed several villages and massacred locals along the way.

Mocomo shared how the Japanese took over Mocomo’s village to use as a radio communication’s post, of which you can still see remnants today, and which meant they had the power to do as they wished.

They killed the animals and tormented the people at will.  Mocomo had no choice but to flee her village and reestablish further up the mountain.  She strategically moved between villages again and again for a few years while the Japanese scavenged the mountains and valleys.

She wanted to avoid them at all cost; her survival depended on it.  After all danger passed, Mocomo reestablished in her village to gain back the peace of mind and her typical tranquil tribal life.

Another interesting thing I learned through Mocomo is that Karen females change their name after they give birth for the first time.

Mocomo’s original name is Nan La, but once she gave birth to her first son, Moco, she changed her name to Mocomo, which means “Moco’s Mom”. (Mo is for mother)  You’ll notice the same with Chalamo.

The night was coming in, and after a full day of hiking and meetings we reached Piak’s house, a couple hours away from Mocomo’s house.

I was tired and ready to have a quick meal to go straight to bed, but the Karen people are all family in one way or another, so several of Piak’s family and friends came to his hut to spend some time with his guest during dinner time. I was more than happy with that.

In fact, I loved the gathering and the quality time with his family. This is an experience I’ll never forget.

As everyone chatted in Karen dialect, I looked at Piak cooking. He sat on the floor next to the fire, turning the pork meat and stirring the rice every now and then. As simple as this dinner was, it was deliciously seasoned with local herbs and spices – all from Piak’s garden.

Later on, as the night quieted down, I laid down on my floor mattress and listened to the forest until I fell asleep. I had to rest, since another hike and the journey back home was waiting for me the next day.