I know that travel means in Africa are not the most pleasant and that any means of comfort are often not expected.  But, one means of transportation that went beyond the lowest standards you could ever expect was the Overnight Ferry from Zanzibar to Dar es Salaam, with Seagull Ferry.  (oh yes, I threw the name in the middle!)

Going to Zanzibar with the regular day ferry was a breeze.  It cost $35, was air-conditioned, showed poorly translated movies (which are fun, actually), and took a total of 2:15 hours to get there.  Not bad at all. 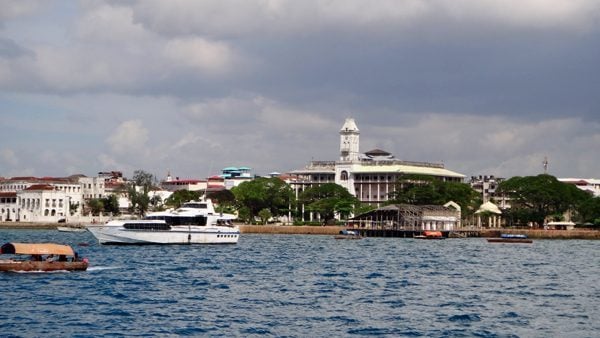 Now, on the way back it was trickier.  I had to plan with mad precision a ferry, train, and a few buses that would take me all the way from Zanzibar, Tanzania, to Lilongwe, Malawi.  Oh, and I didn’t want to spend a night in Dar es Salaam since that city is a hole.  It is!

So, after deliberately thinking about it, the overnight ferry seemed like the “wisest” choice.  My friends, Dave and Hugh also came to the same conclusion, though once in Dar they would hop on a bus to Moshi.

We would get to Dar early enough to catch our train/bus respectively, without any unnecessary layover in Dar.

Not only would we be saving money by taking the cheaper overnight ferry, $25, but we would also save on accommodation.

Perfect!  The plan sounds great as an idea, but once executed, the reality was far worse than what we expected.  We all knew that we shouldn’t expect a cabin or any place to sleep or lay comfortably.  We were fine, to a degree, with sleeping on a seat.  And, we were expecting similar conditions as in the day ferry, but just 8 hours long.

How wrong were we…

Once we boarded the Seagull ferry (about an hour before departure), we saw the crude reality we’d had to live for the next 8 hours.

The ferry was massively overbooked.  There was not a single seat available, in either of the two floors.  People were standing in the hallways, on the three feet wide exterior balcony, and taking every single space that they could call their own for the rest of the night.

Bags and boxes were piled up high.  Children were screaming and crying.  Chickens were carried in banana leave baskets.  People walked up and down the hallways as if they had nothing else to do (well, they didn’t).

But the worst was…  people were, um, how can I say… um, smelly… no, not smelly… they had strong body odor.  Add to that, no air conditioning and no operable windows for ventilation.  The place was an oven.  Ugh…

The conglomerate of hundreds of sweating bodies, with strong body odor, and no ventilation, created the perfect environment for the next bubonic plague.  Or at least it smelled bubonic to me.

Dave, Hugh, and I headed to the second floor.  It was just as bad as the first.  Without any other option, we sat on the floor and hoped for the best (with little expectation).

Dave asked for the time.  It was 9:29 pm.  It had only been 29 minutes since we departed, but it had already seemed like an eternity in this hell.  We needed to do something.

Hugh wandered around for a while and came back with a small, yet uplifting, sign of hope.

“The entrance door from where we came in is open, and there’s a space next to it where we can sit on the floor.”

Ventilation!  We didn’t care about a seat; we wanted to breathe and have ventilation for the sake of our lives.

And that we did.  We sat, next to the open door, as the ferry slowly navigated to Dar.

The breeze was barely noticeable at times, but still, it was much better to sit next to the open door, which felt at least 5 degrees cooler, than to seat anywhere else.

There was time to read, to listen to music, to talk about how horrible this experience was… anything…. Anything but to move from our spot, or else it would be long gone in a second.

After about two hours, and a terrible local movie in Swahili that was blasted through every possible speaker in the ferry, we could see the bodies of old and young, ours included, covering every inch of the floor.  It was the unofficial bedtime.

I, feeling tired enough, sneaked myself even closer to the door –sticking my head as close as possible to it– and zoned in and out for the rest of the night.  The heat was still uncomfortable, yet bearable.  I spent the entire night sweating like a pig.

Finally, at 6:00 am, we could see the pier at Dar.  As soon as the bridge touched the ferry, we all jumped out of the ship, like rats trying to escape from a sinking ship.  Well, we really were trying to escape.

I had never been so happy to be out of a ferry!

I know I will be back to Zanzibar in the future.  The island is wonderful and so culturally rich.  But, I will NEVER, ever, take that Seagull night ferry again!  And I seriously don’t recommend it to anyone.  EVER!