Bioluminescent Bays, or Bio Bays, are a rare natural phenomenon that must be experienced at least once in your life. A bio bay is a bay that has a high concentration of bioluminescence – in other words, the water glows.

This bioluminescence is caused by single-celled microorganisms called dinoflagellates, who glow briefly in a blue color whenever they are disturbed (when you move or splash the water).

There are only five bio bays in the world, but luckily, Puerto Rico has three of them, and all three are easy to visit and open to kayaking them at night.

Here I’ll share with you what you should know before visiting these bio bays to get the best experience. 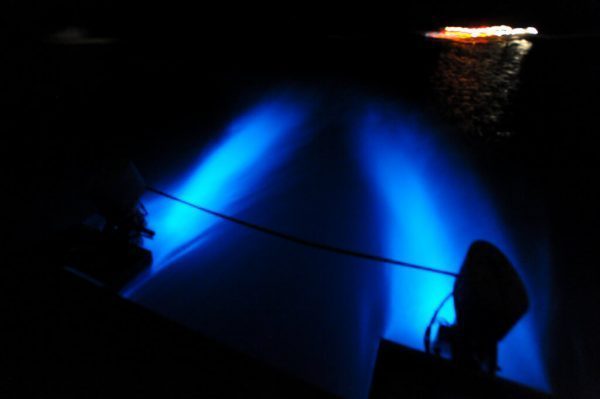 I’ll start with this one because it is important to know that all those pictures you see on the internet, ALL OF THEM are photoshopped. Yes, the water glows, and yes, it looks magical, but it’s never as bright as those pictures make it look like.

In fact, it’s almost impossible to take a good picture while you’re kayaking on the bay because it is too dark and there’s too much movement for a long exposure shot.

This is a natural phenomenon that varies on a daily basis. Maybe you’re lucky and get to see the water in its 100% glow state, or not so lucky where you don’t see anything at all – under 30% glow. So, expect anything, but hope for the best.

I’ve kayaked a few times on all bio bays in Puerto Rico and I can say that I’ve had all kinds of experiences, from “meh, the moon is not helping and the glow is not at its maximum, but it’s still cool,” to “OMFG, I’m tripping in blue microscopic acid!”

So far, my favorite experience has been in Vieques, but yours could be different.

2. Pick a Bio Bay Based on Your Trip’s Route

As mentioned, Puerto Rico has three bio bays. These are:

The consensus among most people is that Mosquito Bay is the best bioluminescent bay in Puerto Rico and the world.

Mosquito Bay is so stunning that it has the Guinness World Record for being the brightest bio bay in the world.

Having said that, it is not guaranteed that the brightness of that bay will surpass the other two on any given day. We are dealing with nature.

The glow percentage varies on all of them every single day based on the water temperature, phase of the moon, water currents, and other ecological variables.

In terms of accessibility, Laguna Grande is the easiest to access as it is the closest to San Juan, just 50 minutes away by car. Due to the accessibility, this is the most touristy of all three.

Mosquito Bay will require you to take a ferry or a short flight to Vieques Island, and spend a night there, at least (worth it, though!).

On the other hand, La Parguera is the least touristy, but it is within easy reach if you’re traveling on the western side of the island.

Years ago, swimming was allowed on all bays as it’s one of the trippiest experiences you can have.

The water is so warm and the glow so surreal, all you want to do is swim and kick your legs to make all the water around you glow, kind of like an Avatar experience. It’s an experience I’ll never forget.

Even if you don’t swim, just dipping your hands and removing them quickly will allow you to see the glow dripping off your hands.

Today, though, swimming is restricted to preserve the ecology of the bays. One of the main reasons swimming is forbidden is to prevent kayakers from dipping in the water with chemicals on their bodies, like bug spray and sunscreen.

Having said this, it is said the Department of Natural and Environmental Resources (DRNA in Spanish) has allowed tour operators to offer swimming, with the proper DRNA permit.

In recent years, though, this seems to have been slowly restricted even further, so you must ask directly to each company – though these days it’s more probable they’ll say no.

Apparently, Alelí Tours still allows you to swim in La Parguera (this bay seems to be the least restrictive since it is the least touristy).

You could also swim on either bio bay, but only if you have your own kayak and do it on your own – and at your own risk.

Still, Mosquito Bay is the strictest one, so even on your own, you might not be allowed to do it if a tour company or DRNA official sees you (I have friends who have gotten away with it on their own, though).

Swimming on the bio bay is not an “evil thing.” We’ve done it for generations without affecting the bay.

According to marine biologists, most glow variations happen naturally and can change on a daily, monthly, or even a yearly basis.

Tour companies are no longer allowing swimming just to limit the amount of chemical pollution they’ve seen with mass tourism – as explained above.

So please, if you are going to swim on your own, make sure you have absolutely no chemicals on your body!

4. Try to Plan Your Trip Based on the Lunar Cycle

The best time to go kayaking on the bio bay is when there’s a new moon.

While you can enjoy all three bio bays on any given day, their brightness tends to look more spectacular when you have a clear night around the new moon. Otherwise, a cloudy night on any other lunar phase will work just as fine.

Should you go during the full moon, tour companies have their ways to help you see the glow, by taking a tarp you can put over your kayak to darken the water under you.

But, preferably, go when it’s a new moon. From experience, the visual impact and glow change dramatically when you have a new moon and the glow percentage is high enough – 70% or more.

If you want to make sure when’s the best time to go to the bioluminescent bay in Puerto Rico, I recommend checking this Moon Phases Calendar. It can help you plan your trip according to the moon phases. 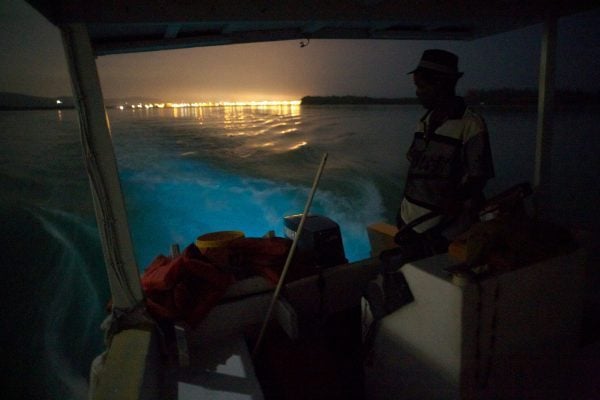 5. Call the Day Before to Check the Bio Bay’s Brightness

Most tour companies won’t take you kayaking if the glow is under 30%, which is the lowest range where the dinoflagellates concentration makes them visible.

Still, it’s good to call them a day or so ahead of your tour to confirm how bright has the bay been lately.

Storms, tides, water temperatures and seasons do affect the water glow in all bays at different rates, so if you have the opportunity to scout and plan last minute, call several tour operators on all three bays to see which one is the brightest at the moment.

Have in mind, that if you’re planning at the last minute, you must take into consideration the logistics of getting there. Getting to Lajas from San Juan takes about 2.5 hours by car. Getting to Ceiba takes about 1 hour.

To Vieques, you have to either fly from San Juan to Vieques or drive to Ceiba and take the 1-hour ferry to the island or the 12-minute flight, also from Ceiba.

6. Preferably, Book Ahead of Time

Do this especially if you’re going on a holiday weekend, as this is a popular activity in Puerto Rico. Check the cancellation policy with the tour company, in case you find a brighter bay at the last minute and wish to change your trip.

Prices range from $50 to $100+, depending on the type of boating or kayaking experience you’re looking for.

We might be in the 21st century where most things can be booked online, but it seems like most of these kayaking companies haven’t caught up to this wonderful technological marvel that can ease our travel planning.

Thankfully, some companies do display their tour options on Viator, so I highly recommend booking them immediately through their platform. It costs the same – and sometimes less than on their websites.

The following are links to some of the best of Puerto Rico’s bioluminescent bay tours:

Otherwise, you can visit each tour company site, see what else they offer, and go through their booking process – whether instant or old school email. 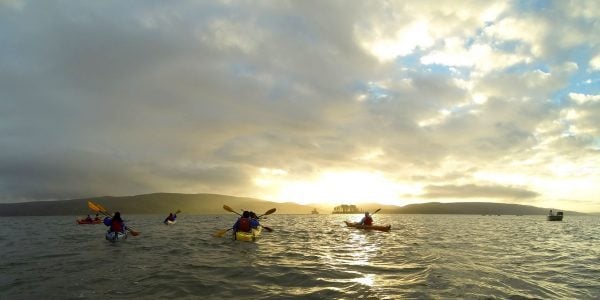 Depending on the time of the year, the earlier tour might still be a bit bright when you depart, giving you the opportunity to see the mangroves as you kayak in the twilight. Then it’ll be fully dark once you reach the center of the bay.

On the other hand, the second tour will be fully dark from start to finish.

Having said this, you only see the glow at its maximum once you reach the center of the bay, so it’s ok to pick either – but most people prefer the latter.

8. Forget About the Pictures

Lastly, leave your camera behind. Try to enjoy the experience without the camera. You will get wet as you paddle, so anything you carry might also get wet.

Also, as explained before, your cameras and phones won’t capture the glow as you see it – even with long exposure. If you use flash, you’ll only see yourself and the kayak in total darkness.

So, enjoy, experience, and live the moment to the fullest without worrying about your pictures!

Have you kayaked on any of the bioluminescent bays in Puerto Rico? How was your experience? 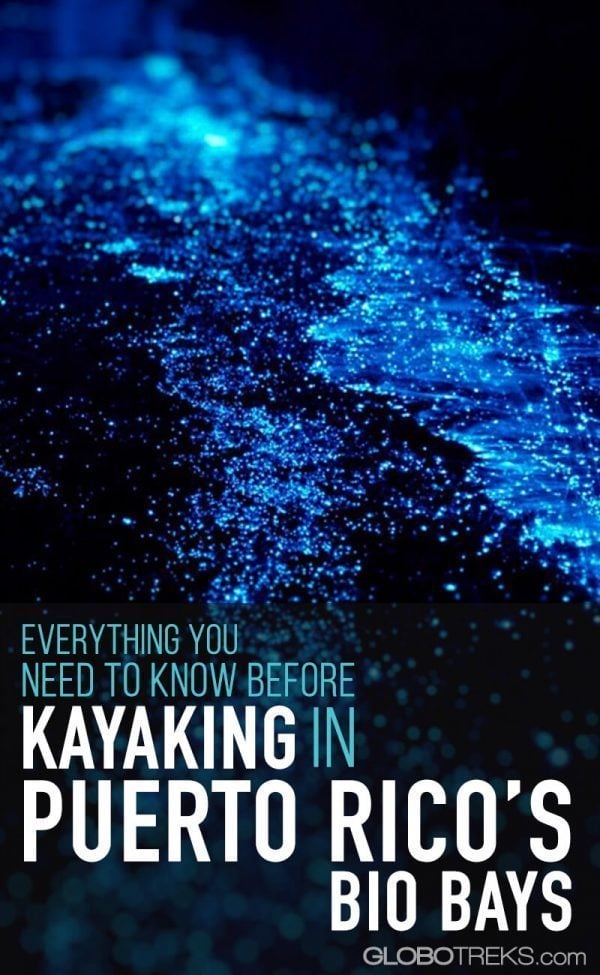