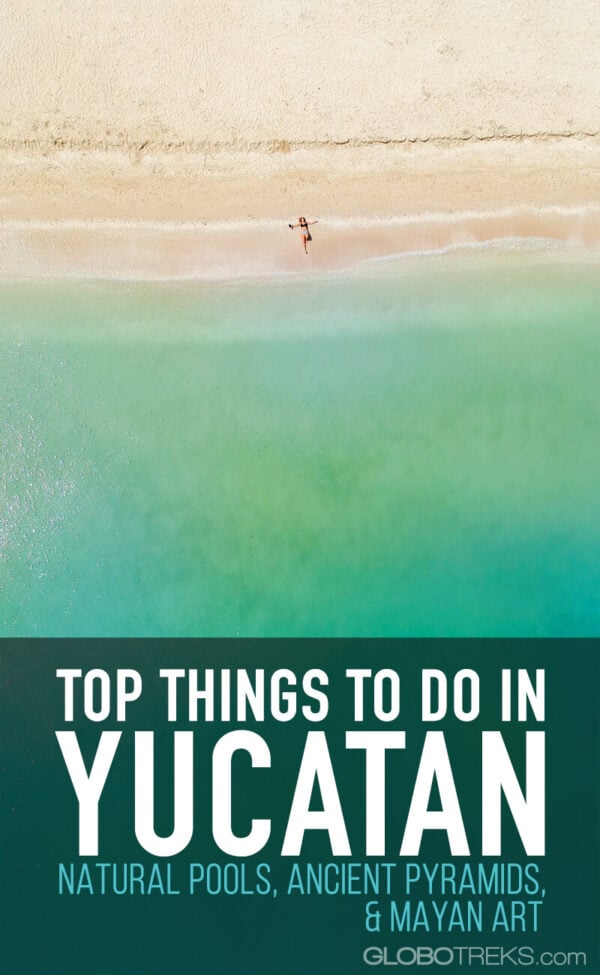 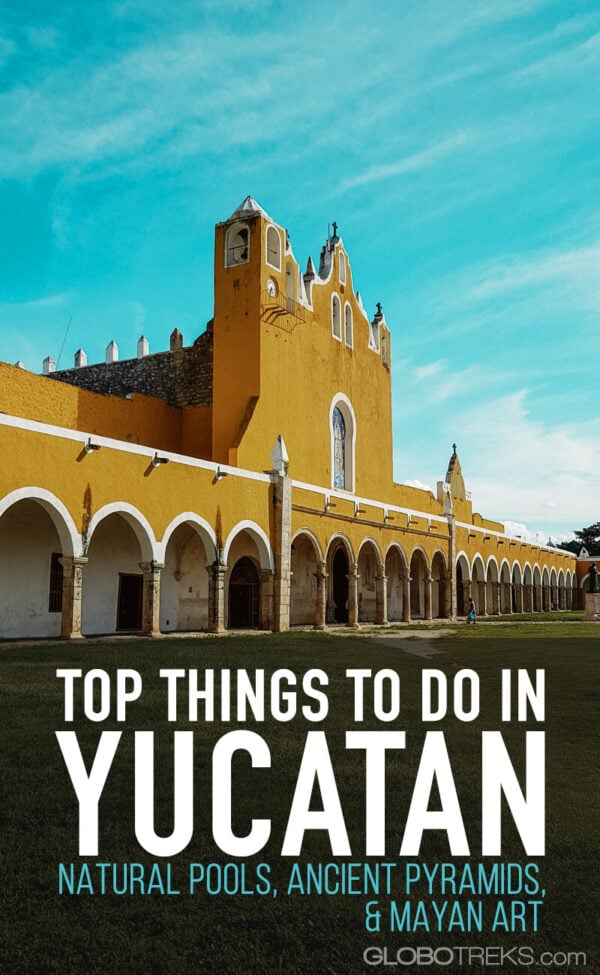 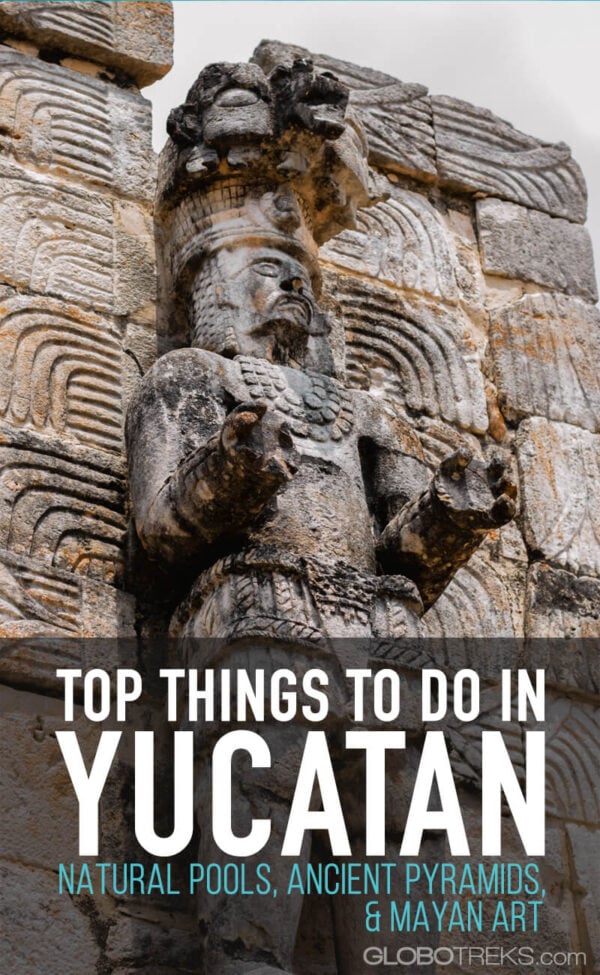 Yucatán has more than just beautiful beaches, boasting ancient pyramids, incredible wildlife, and Mayan culture. The state is positioned in the Gulf of Mexico on the northernmost coastline of the Yucatán Peninsula. Experience archaeological sites, city tours, and delicious local cuisine.

Are you an adventurous couple traveling the world, or a solo traveler looking for an activity-filled vacation? Here are some of the best things to do in Yucatán.

Top Things to Do in Yucatán

Yucatán is famous for the relaxing beaches in Celestun, ancient pyramids along the Puuc Route, wildlife in the Celestun ecological biosphere, and countless natural pools.

Yucatán is an important region for the Maya civilization. During the classic period, from 250 – 900 AD, they reached a peak in the development of the ancient cities Chichen Itza, Izamal, Motul, Mayapan, Ek’balam, and Ichcaanzihoo (present-day Mérida).

The Mayan ruins and affordable living costs have helped Yucatán tourism to continuously grow, helping it become the 8th most visited state in Mexico. Mérida is the most visited city in the state and offers all of the services of a major city. 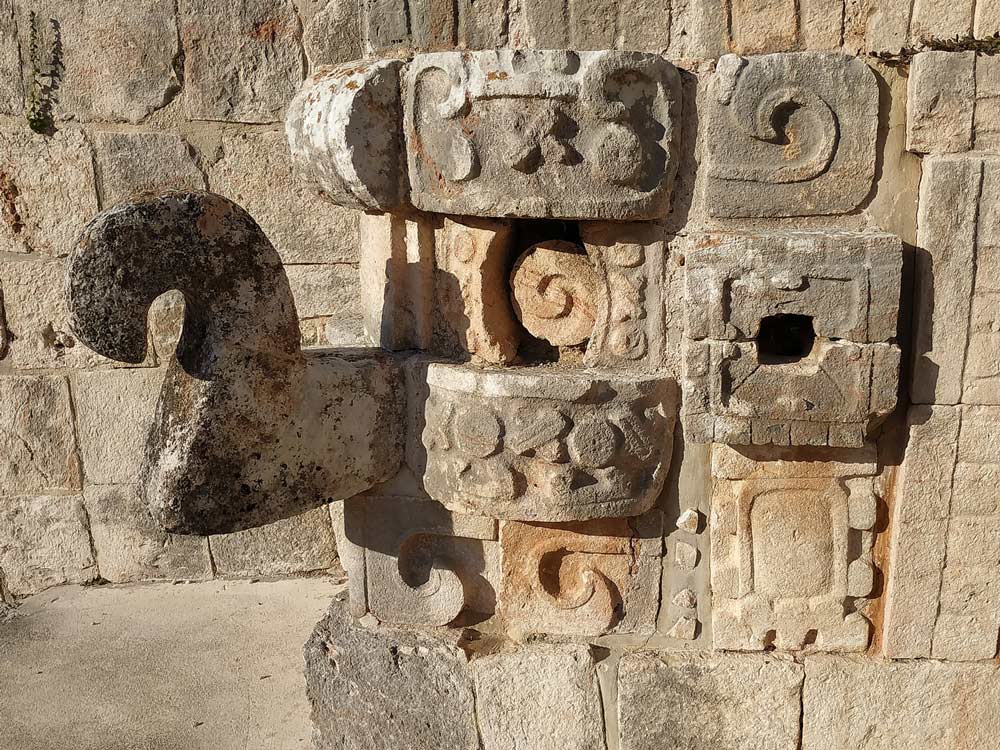 What to Do in Mérida

Eat, drink, and shop in this cosmopolitan city with a rich cultural heritage. Enlist the services of a guide to discover more about Mayan cooking, colonial-era architecture, and Mexican drinks served in the local-style bars.

When you arrive in Mérida, head to the Lucas de Galvez market to browse through hundreds of food vendors. If you want to learn from the local culture and don’t understand Spanish, consider visiting the market with your guide during a ‘taste of Yucatán’ cooking class.

Tour the City in a Gua Gua Bus

Travel in the Gua Gua bus on a tour through the famous avenues of Mérida while learning about the beautiful ‘White City.’ Pick up interesting facts about the city from your guide while traveling on a colorful open-sided bus.

Share happy hour with a local on a Cantinas walking tour tasting the craft beer and mezcal from Mexico. This friendly tour takes place across three canteens, each with its own botanas (small food dishes) made using ingredients found in traditional Yucatecan cuisine. 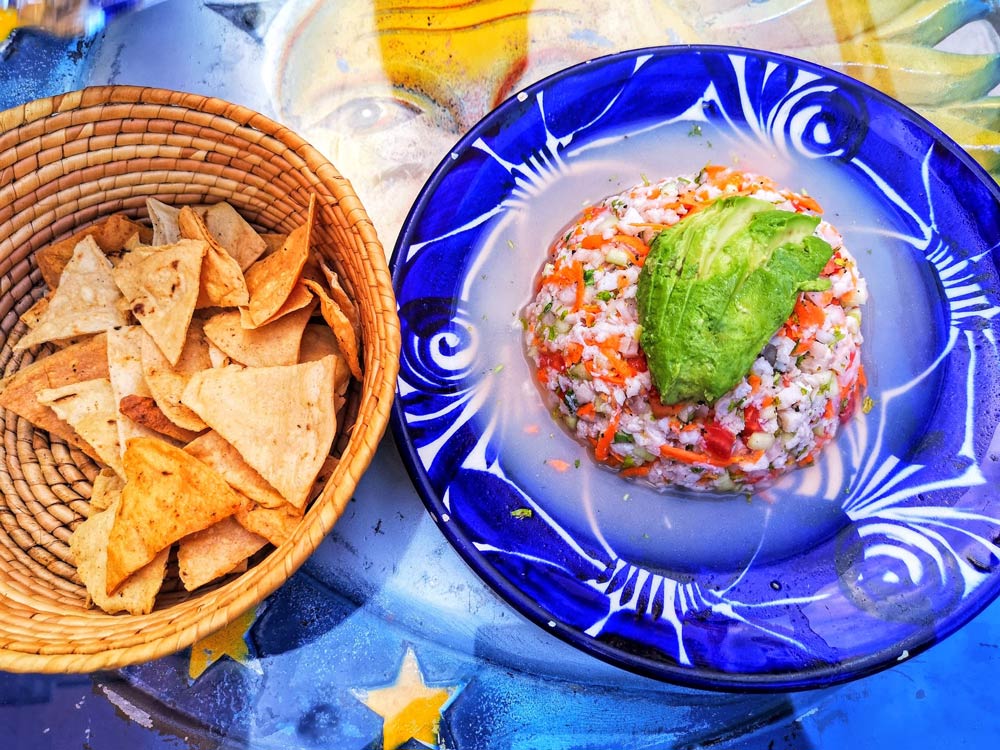 Celestun is a fishing village located on the south-western coastline of Yucatán. Travel by bus to Celestun from Mérida and instantly feel relaxed. It has some of the best beaches in Yucatán (with fewer visitors than others).

The wetland reserves nearby welcome migratory birds including hundreds of pink flamingos.

Known for the huge flocks of pink flamingos, this natural wetland has a variety of natural environments. Consisting of a shallow continental marine platform, coastal dunes, mangroves, lagoons, marshes, and low rainforests.

Keep your eye out for spoonbill, heron, cormorant, egret, pelican, and kingfisher species. It’s a birdwatcher’s paradise. The beaches and lower dunes in the reserve are also used as a nesting ground for turtles. Travel from Mérida on a day tour to Ria Celestun Biosphere Reserve.

Soak up the sun with the sea at your feet at Playa Norte Celestun, a white sand beach littered with shells. Enjoy comfortable swimming conditions with the water in the Gulf of Mexico averaging 25℃ (77℉).

These conditions are optimal for spending long periods of time in the sea. The small fishing town offers fresh seafood from thatch-roofed restaurants that line the beach.

Things to do in Valladolid, Mexico

Baroque-style cathedrals, a 16th-century convent, and natural pools are just a few of Valladolid’s irresistible attractions. Take to the streets on foot to experience the cobbled lanes, cute coffee shops, and delicious food from various restaurants.

Comfortable on two wheels? Rent a bicycle and explore the city and its main square.

Located in the heart of Valladolid is the Cenote Zací, a freshwater sinkhole with access to a cave. Explore underground and enjoy a refreshing swim in this cenote located within Valladolid city. Feeling adventurous? Bring your own goggles for a better view below the surface.

Pay the small fee for a ticket, or eat at the restaurant and your admission is free. 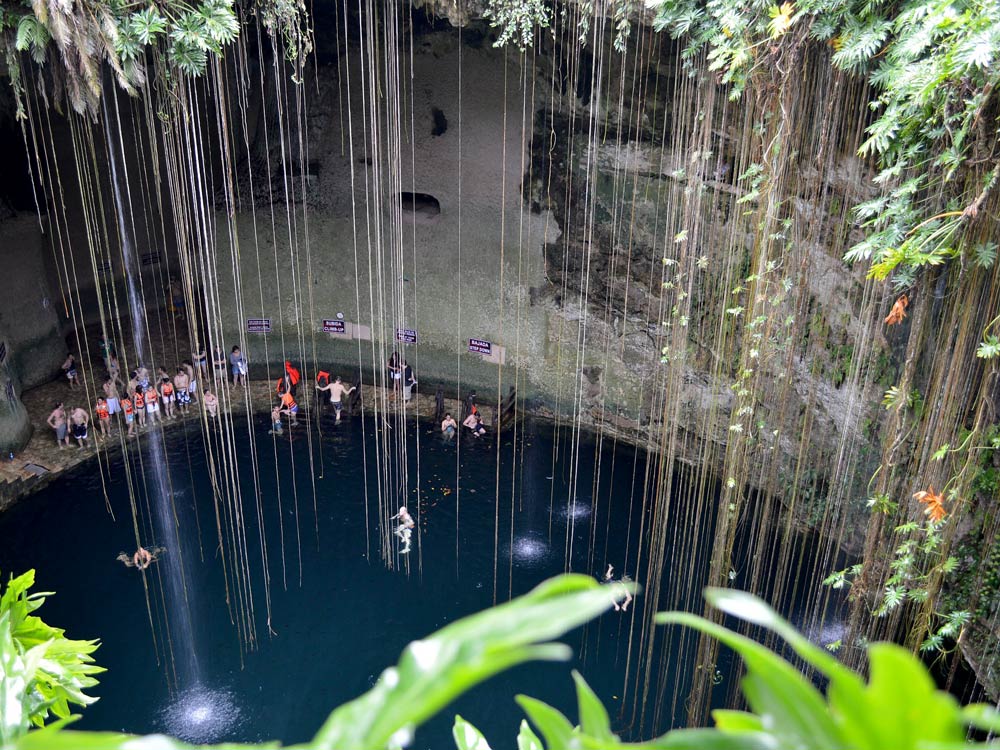 Costing only a couple of dollars for entrance, the Convent of San Bernardino de Siena is well worth a visit. Constructed between 1552 and 1560, it served the dual purpose of a fortress and church. The building contains a 16th-century fresco and a 19th-century wooden altarpiece.

It is the second-largest Franciscan construction in Yucatán. The convent’s walled grounds contain a cenote and require a small entrance fee to visit the grounds and the museum.

Only 30 minutes from Mérida, Progreso is a port city with two Blue Flag-certified beaches. It is a sleepy town that comes alive when cruise ships dock at the impressive 4-mile long pier. The weather is pleasant throughout the year with rainfall concentrated from May to September.

Walk the ocean pier, head out onto the water, or admire the street art in this laid-back city.

Catch speckled sea trout, snook, and tarpon with experienced local fishermen. Charter a boat and head out into the safe, calm backwaters of Progreso for a thrilling experience. Learn about topwater and jig lures while waiting for a bite.

Had a successful day on the water? Visit a local restaurant to have your freshly caught fish prepared for you as a fillet or in a taco. 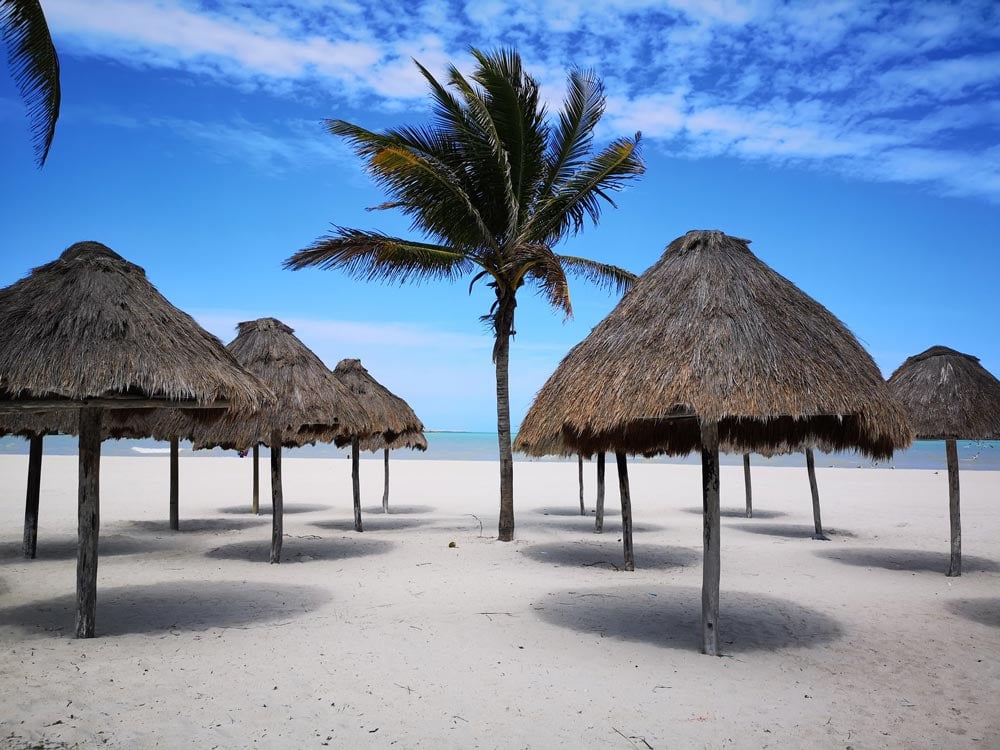 Take a short walk along La Murge, a street located two blocks away from the Malecon. Recently restored, it is home to impressive murals and art installations. The alley has warm-toned lights running in series overhead, helping to create a lovely atmosphere.

The name translates to ‘alley of love’ suggesting this is an affordable romantic evening activity.

Pisté is a village in the center of Yucatán state and is best known for the nearby Mayan archaeological site Chichen Itza and the cenotes Ik Kil and Tsukan Santurio de Vida. It is nearly untouched by tourism and offers authentic Yucatán cuisine.

Despite the small population of 6000 residents, it offers a variety of great hotels, bungalows, and restaurants at affordable prices.

The Largest Mayan Pyramid in the Yucatán Peninsula: Chichen Itza

Chichen Itza is a UNESCO World Heritage Site, and one of the Seven New Wonders of the World. Stone monuments at the site reveal masterpieces of Mesoamerican architecture from the Late Classic and the Terminal Classic periods.

Visit our more in-depth article on what not to miss at Chichen Itza. 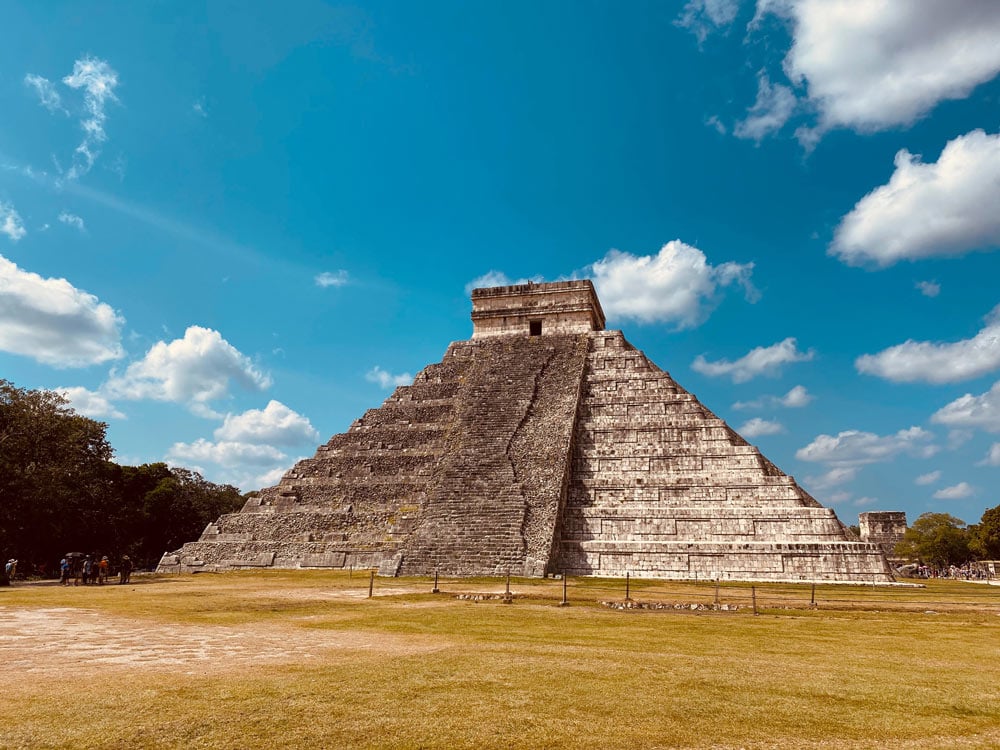 Located only 7.9 km from Pisté, the beautiful blue water, catfish, and stalactites make Tsukan Santurio de Vida a must-visit. The site includes Casita Mata, a representation of a traditional Mayan house. It costs $10 USD to visit and is a quiet cenote in comparison to the popular Ik Kil.

The ticket includes a life jacket rental which is required due to the incredible depth of the pool.

Puuc is the Mayan word for “hills” and is used to describe the style of ornamental facade appearing on Mayan buildings. The route connects five of the 17 main archaeological sites in the Yucatán Peninsula namely Kabah, Uxmal, Sayil, Labna, and Xlapak.

We recommend you visit the ancient Maya sites of Chichen Itza, Uxmal, Dzibilchaltún, Xcambó, and Izamal. 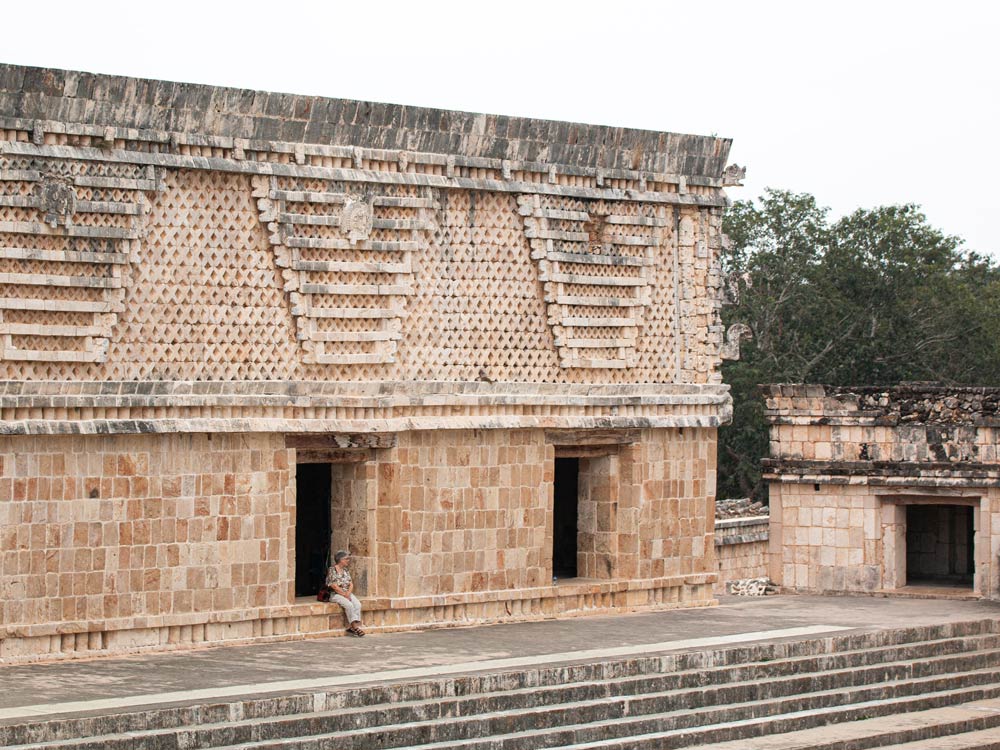 It is the safest state in Mexico. Yucatán’s capital, Mérida, was awarded the city of peace in 2011 and has maintained its low crime statistics. The vacation destination, like all tourist destinations, does experience petty crime.

Solo travelers can explore the area without fear of being targeted. The only concern in the area is the discrepancy between prices offered to locals and those displayed to tourists. To avoid this, simply research an activity before negotiating a price to get an idea of a fair price.

Other Great Destinations in the Yucatán Peninsula

Quintana Roo borders Yucatán and the Caribbean sea and forms the eastern coastline of the Yucatán Peninsula. It is home to Mexico’s popular vacation spot, Cancún, Cozumel, Playa Del Carmen, and more. It offers natural environments as well as resorts.

Cozumel is a small island off of the east coast of the Yucatán Peninsula and offers tons of activities. It has tropical weather all year round but is best visited between December and early June.

Campeche borders Yucatán to the west and makes up the western coastline of the Yucatán Peninsula. San Francisco de Campeche, the state’s capital city, has forts and archeological sites which are not as well known and receive fewer visitors than those found in Yucatán.

Now that you know what to do in Yucatán we hope you feel more confident in planning your trip to this incredible destination. Whether you are looking to lay on beautiful beaches, swim in natural swimming pools, or absorb the Mayan culture, Yucatán is the perfect location.

Have you experienced great activities in Yucatán we have yet to mention? Tell us in the comments below. We love sharing the best travel experiences with our readers.

Essential Info: Logistical Tips and Tricks to Book your Trip to Yucatan

Book Your Flight
Find a cheap flight by using Skyscanner or Kayak. These are two of the sites I use the most due to their exhaustive search on several websites and airlines around the world. They usually bring the cheapest fares.

Book Your Accommodation
If you’re looking to save money by staying at a hostel, HostelWorld has the largest inventory of hostels. On the other hand, Airbnb offers a wide variety of rooms and apartments at affordable prices. (Get $40 off your first Airbnb booking with this link.)

Book Local Transportation
Bookaway offers the easiest and most accessible way to book overland transportation with local operators; be it by bus, train, ferry, plane, mini-van, or even private transfers.

Don’t Forget Your Travel Insurance
Travel insurance with comprehensive coverage will protect you against unexpected events like theft, cancellations, injury, and illness. I use World Nomads and highly recommend it.

Need a tour?
Lastly, if you’re looking for the best day-tours and cheapest ticket entrances to local attractions, I recommend checking Viator, as they have the largest selection of attractions, passes, and activities all around the world.

Other Travel and Money-Saving Tips?
Check out my resource page for some of the best products and companies to use for your trip. If you like saving money (like I do!), then this page will help. 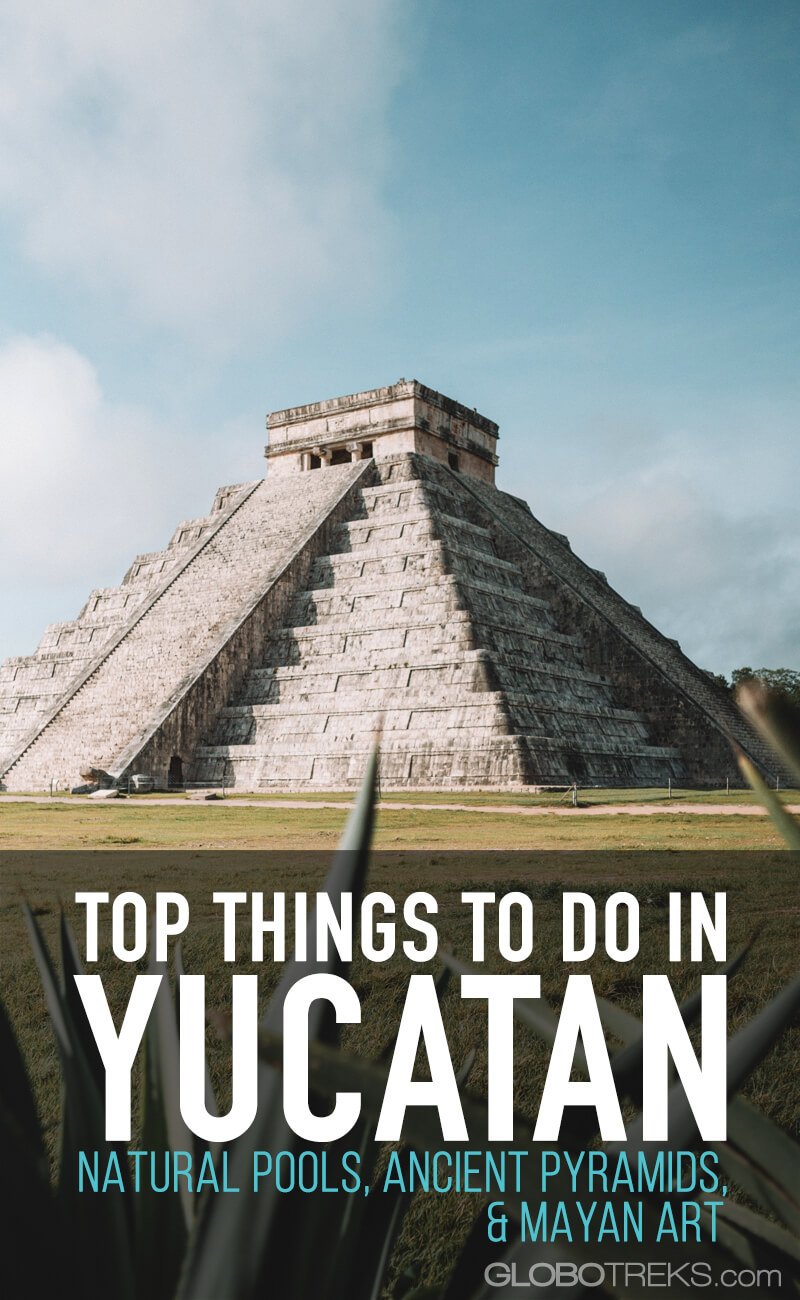