Chichen Itza is arguably one of the most famous Maya Archeological sites in all Central America.  It is the largest Maya site in the Yucatan Peninsula in Mexico and to this date, it is one of the most visited attractions in Mexico.

Chichen Itza, which means “Mouth of the Well of the Itza”, was named a UNESCO site in 1988 and recently named as one of the New Seven Wonders of the World.

One thing to know is that Chichen Itza gets ridiculously crowded and hot, so it is recommended to go early in the morning to avoid these. 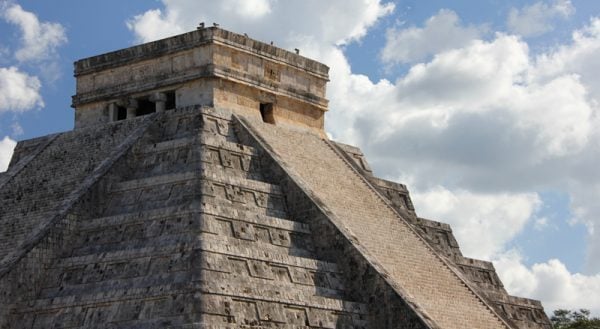 Though it is far from Mexico City, it is possible to visit the site from Cancun, another popular destination in Mexico. You can either take a three-hour bus ride from the bus terminal or buy a tour departing from there.

Chichen Itza was a center of pilgrimage for the ancient Maya for over 1,000 years. The Mayas inhabited the city from 500 AD to 900 AD, when the Maya civilization declined.  Around 987 AD, the ruler of the Toltec people of central Mexico came to Chichen Itza, and with his Maya allies made the site the most powerful city in the Yucatan.

The ruler called himself “Kukulcan”, the name of the Mesoamerican Feathered Serpent deity. Chichen Itza became a center for worship of that god as well.

About 1221 AD the Maya revolted against the rulers of Chichen Itza.  Even though this revolt generated a decline in the city, pilgrimages by the Mayas were still done until the Spanish Conquistadors came in the 16th century.

While the site is pretty big and there are many guided tours to choose from, you don’t necessarily need to pay for those to properly visit the site and learn about its history.

The ruins are well identified and their respective information is written in front of them.  But, if you wish to, well-informed guides speaking all major languages are available to hire.

Tip: Since Chichen Itza is so crowded; it is really easy to piggyback or eavesdrop on any guided tour.

Some of the Important Buildings to see at Chichen Itza 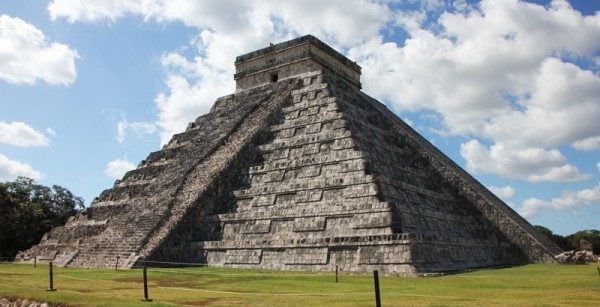 The Pyramid of Kukulcan or El Castillo

During the Spring and Fall equinox, the shadows create the form of a serpent going down the staircase. If you add the steps of the four stairways up they total 364, plus add the top platform to equal 365 – a perfect calendar year.

Temple of the Warriors

This temple is one of the most impressive structures at Chichen Itza. The temple consists of four platforms, flanked on the west and south sides by 200 round and square columns. It may be the only known late classic Maya building big enough to hold really large gatherings.

This ball court is the largest in the whole Mundo Maya.

Temple of the Jaguars

This structure is attached to the ballcourt complex. It has a stone jaguar, feathered serpent columns, and murals. 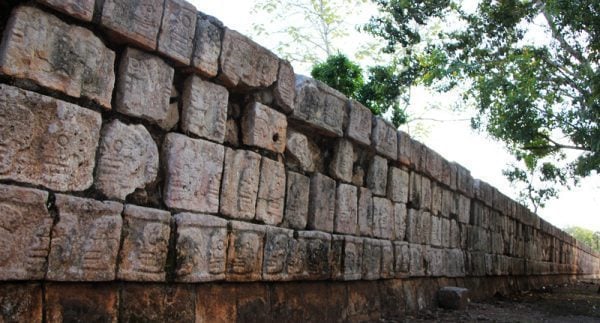 The platform of the Skulls

This is a Toltec structure where the heads of sacrificial victims were placed. The platform walls have carved reliefs of four different subjects: skulls, a scene with a human sacrifice, eagles eating human hearts, and skeleton warriors with shields and arrows. 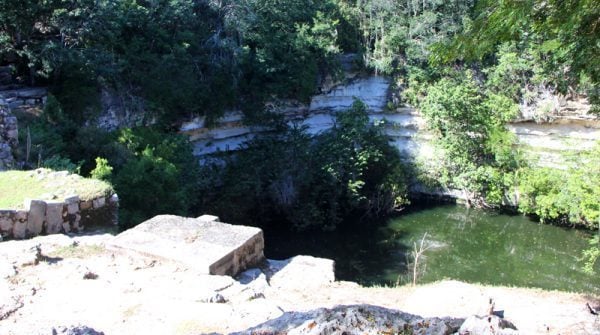 This is a large natural well or limestone sinkhole that was used for sacrificial offerings to the ancient rain god “Chac”. This is the resting place for not only young virgins, and other men and women of all ages. Many artifacts of gold and jade were found here, some traced from as far away as Colombia.

A circular temple on a rectangular platform.  This building was also sacred to Kukulcan as it served as an astronomical observatory.

A smaller version of “El Castillo” that served as a tomb for one of the city’s rulers.

There are many more buildings to see at Chichen Itza as this is a bit complex, but these ones will give you a great idea of why this is such an important site.