It’s been a year since I visited Florence for the first time. Lately, after my 5th return to Italy, I started to remember the cities I visited on that very first trip to the land of la dolce vita.

I thought about Rome, Venice, and Florence. I loved them all and have fond memories there, but for some reason, I never got to write about them on my blog. Such a shame.

It’s my time to do justice to one of my favorite, if not my favorite city in Italy: Florence.

Florence is considered to be the artistic, historical, and cultural capital of not only Tuscany but of all Italy; and I could not agree more with that statement.

Its physical elegance coexists beautifully with the il dolce far niente (the sweetness of doing nothing) lifestyle of the Florentines and it reveals the city in a strong, yet gentle way that makes us want to delve deep into its art, culture, and history.

It is no surprise that this is the birthplace of the Italian Renaissance – which started in the 14th century.

Art, architecture, and culture were taken out of their dark depths and lifted to new glories with the help of gifted minds like Michelangelo, Leonardo DaVinci, Brunelleschi, Botticelli, and more.

But, like many cities of the Renaissance, Florence had been built over many years and so was home to numerous churches, public buildings, and houses constructed with Romanesque or Gothic architecture.

During my first visit, Florence became the playground where all my architectural history knowledge resurfaced to be dusted off with the real experience of a true renaissance city. It was an exciting and rejuvenating experience that took me back to my learning days in college.

Trust me, this city is brimming over with history and no Florence itinerary is complete without a good dose of renaissance art and architecture.

The city is populated with icons that tell the story of not only the city but of a whole cultural and artistic movement in history. Of them all, there are a few dominating icons that can’t escape the eye. 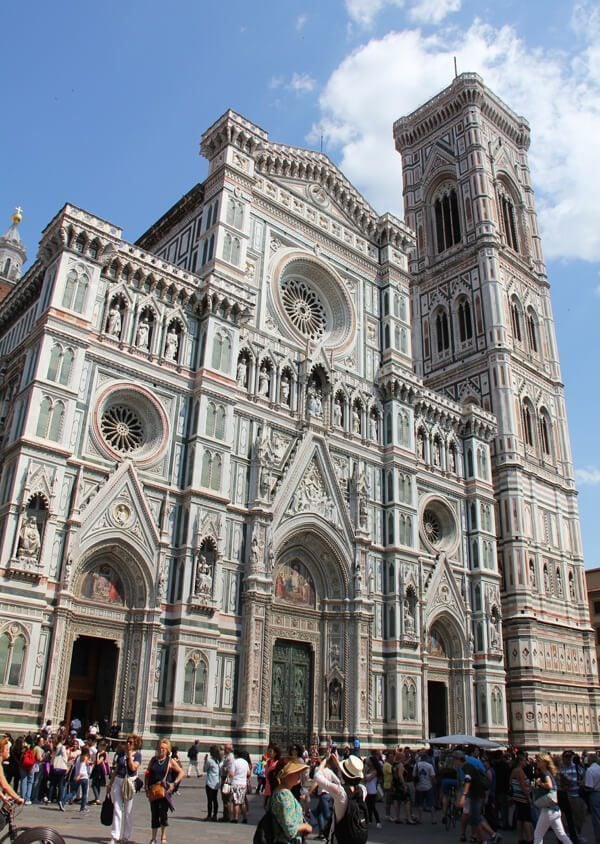 Duomo, or the Cathedral of Santa Maria del Fiore, was a key building in my understanding of how Florence became such a renaissance beauty.

The construction of the dome marked the beginning of Renaissance architecture; with the cathedral and its dome together representing the early Renaissance style, blending old and new designs.

Arnolfo di Cambio began the building in a Gothic style in 1294, but it wasn’t until 1418 when architect Filippo Brunelleschi received the commission to build the dome.

This time disparity happened at the time when humanity strived to reach new heights with the innovative flowering of knowledge and beauty, yet keeping some familiar grounds by referring back to classical sources.

Basically, they reinvented the ingenuity of Greek and Roman art from about 1500 years before, and Brunelleschi was the man at the forefront of this movement. 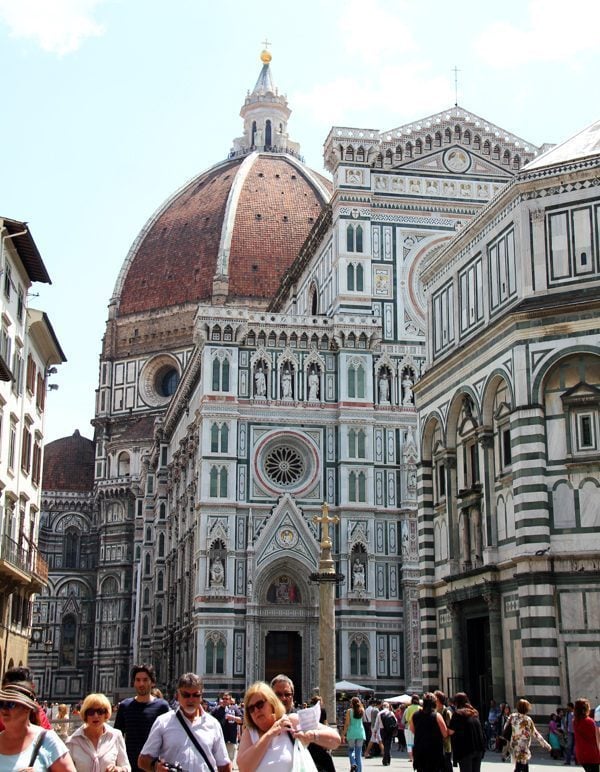 Being the tallest building in Florence, I could not contain myself from climbing the groundbreaking dome of the Duomo.

Climbing up 460 steps of the spiral staircase to the tower top offered me the best view of Florence – a synchronous sea of clay tiles all around, surrounded by the hills and accentuated with a few iconic domes and bell towers. 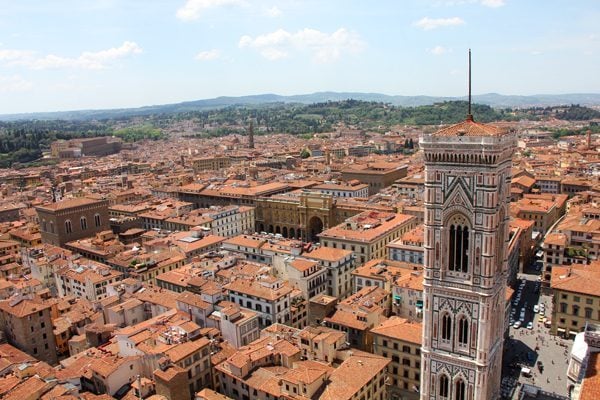 Many more Florentine structures outwardly exemplify this early renaissance mix of old and new design styles. For me, the church of Santa Croce was another excellent example.

On the outside, Santa Croce is an example of Gothic architecture, but the chapel inside is Renaissance in design, due to Brunelleschi’s careful use of proportions and the delicate works of Donatello –The Annunciation and his wooden Crucifix– among others.

With a sunny day ahead, I chose to take a stroll through the city, walk the narrow alleys and discover sights as I bumped into them. Not a hard task when you are surrounded by countless historical pieces.

Next, I bumped into the Galleria dell’Accademia. There was a long queue to get it (about 1 hour), but it was worth it. I finally got to see the David by Michelangelo, among other masterpieces.

Once I set eyes on it, I became dumb by its beauty, size, proportions, and delicate mastering of the marble. There, it made sense to me the quote once said by Michelangelo;

I saw the angel in the marble and carved until I set him free.

Did you know that the piece of marble that is now the David was for some time considered to be “trash” and that it was not Michelangelo who started the sculpture but Agostino di Duccio in 1463?

In 1466, after shaping the legs, feet, and torso; Agostino abandoned the job and ten years later it was continued by Antonio Rossellino, but only for a short time.

It wasn’t until 1501 that Michelangelo got the commission and mastered the work previously done on the marble. In June 1504, David was installed in its original location – next to the entrance to the Palazzo Vecchio. 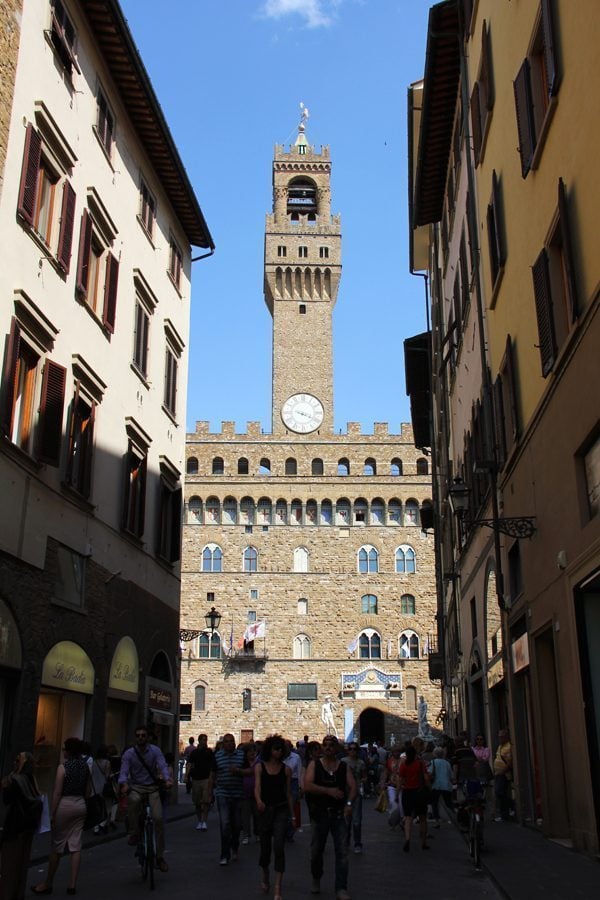 Speaking of the Palazzo Vecchio. I still remember the joy I felt when I first laid eyes on it as I approached it from Via Vacchereccia.

Seeing the massive, un-centered Romanesque bell tower lining straight with the street axis took me back to my days in college studying this building.

It is said that Arnolfo di Cambio (the architect and same one of the Duomo) incorporated the ancient tower of the Foraboschi family (which laid as ruins in the site) as the substructure of the tower into its façade, or that he simply chose to align the tower with the street, and hence why is it not centered in the façade. Which one is more accurate?

I don’t know, but they both make sense with the building, its history, and urban context, which includes the Piazza della Signoria. 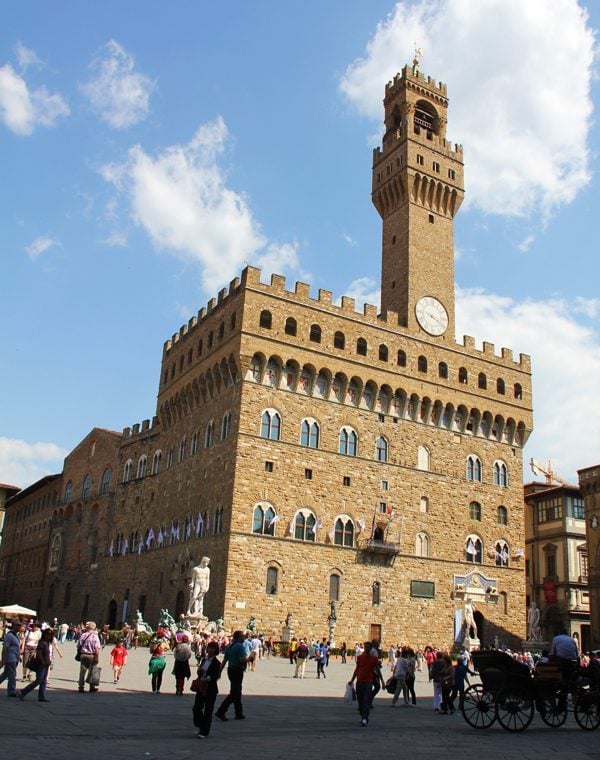 In my opinion, the Piazza della Signoria might be the most significant public space in Italy.

Just standing there, I could see the replica of Michelangelo’s David, the gallery of statues in the adjacent Loggia dei Lanzi, the Palazzo Vecchio, the Fountain of Neptune, a peek of the Galleria Uffizi, and just a short walk away, the Ponte Vecchio.

It was an overwhelming space, in a positive sense, enhanced with the perfect people-watching spots the Piazza provides.

During this visit, I stayed at a hostel relatively near these sights. It was a really good hostel, but I would have loved to have more of a local experience, or even to taste the pleasure of il dolce far niente by staying with a local or maybe renting a room or an apartment, or even couchsurfing.

When I return, I will try to feel this side of Florence, just like I’ve been doing in Milan for the past couple of months. 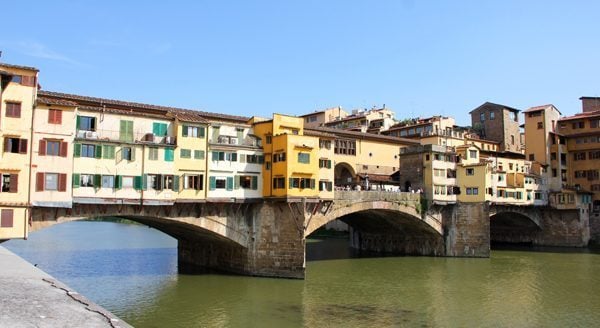 I can imagine myself revisiting so many of these sights. I could walk again along the Arno River and see the Ponte Vecchio with its overhanging shops (the oldest and most famous bridge over the Arno River) while sitting at a café nearby eating a delicious gelato.

I would retake the bus to the hilltop at Piazzale Michelangelo to have the best viewpoint of Florence’s skyline. A sight I loved once, and I’m sure I’ll love again. And I could again marvel at the Duomo and the view from above.

In fact, Florence is the city I know I’ll love over and over the more I get to know it and experience it.