A good time in Budapest goes well beyond sightseeing its history and architecture.

As I found out, Budapestians have an incredible sense of humor and are very friendly people, willing to educate (or “miseducate”) you about their city with their “urban folk” or anything that sounds intriguing and fun. 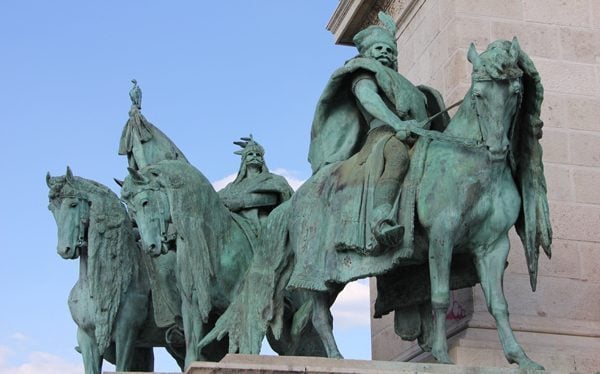 My arrival in Budapest had some humor in itself.  I took the overnight train from Bucharest to Budapest (much better than the hassle of going to airport security for a short flight) only to find out that my Eurail pass was not “properly validated” in Greece (where I started my Eurail journey… Damn!) and that I was “illegally” traveling on the train.

A quick bribe to the train conductor and I arrived safely (yet with 30 Euros less) to Keleti Train Station. Quite an impressive eclectic-style façade on that station… a good introduction to Budapest’s architecture!

While in “the Pearl of the Danube” I had no problem coming across people that would share tidbits of their history, but with a small twist and a grin on their face.

According to them, and as “legend says”, a huge bird dropped the first Hungarian on the hills of what was to become Budapest and declared it his place!

As non-factual as it might be, this definitely sounds more curious than the fact that the Huns conquered the area of Budapest (Pannoia) in 409 and that the Magyar tribes migrated from the Ural Mountains in 896 to this “strategic place for settlement”.

You should know that Budapest was formed in 1873 from the union of three cities – Buda, Pest, and Óbuda– not two as commonly thought.

Apparently, people didn’t care about Óbuda that much to include it in the name, or maybe they just thought it was silly to call it Budapestóbuda.  It’s much better how it is today.

Still, the main parts of the city are named Buda and Pest, and are joined by the Széchenyi Lánchíd, or Chain Bridge, with its welcoming stone lions on the pillars and multiple wrought-iron lamps (as well by a few more bridges too).

The bridge we see today was built in 1849, becoming the first permanent bridge to connect both sides of Budapest. As local gossip says, the first “non-permanent” bridge was commissioned somewhere in the “13th century”.

The king lived on one side of the Danube River and the prince lived on the other.  When the king died, the prince had no way to cross to the other side to his father funeral due to “really bad weather”.  After that, the prince said, “I want a bridge!”.

And again, according to humorous legend, the man in charge of building the current bridge made a public statement that the bridge was “perfectly designed and built.  And, if someone finds an error, he would commit suicide by jumping from the bridge”.

Years passed and no one found an error, until one day, a man pointed a slight, almost unnoticeable dimensional error on one of the lion pillars and told it to the builder. And guess what? “He did commit suicide.”

While crossing the bridge a few times, I looked over for the dimensional error.  And guess what? I didn’t see it!!  Either the builder had a huge ego or he was a fool (or both).

I love folk history! Whether they are true or not, they are often revealing and entertaining. (note: my brief research of the accuracy of these stories has led me to believe they are inaccurate, but who knows…)

Now back to Buda and Pest. On one side of the river lies Buda with its leafy hills, castles, and well-preserved old town. It holds a slower pace and its style is more “conserved”.

To me, it almost fell like really stepping back in time or stepping into a very realistic medieval movie set.  It’s almost hard to believe that this area was heavily destroyed during World War II.

On the other side there’s Pest with its more modern lifestyle, parties, the downtown, and still conserving some good oldies like the Neo-Gothic Parliament Building, the Renaissance-styled Opera House and St. Stephen’s Basilica (which has a mummified hand of St. Stephen… eek!), and the Romantic-styled Great Synagogue, among many others.

For me, Pest presented the best combination of History, Architecture, and Fun!  From partying with my hostel buddies at a beer garden to a party boat full of drunken people, Pest is not shy about showing you how well it can misbehave.

But, back to the other fun in Pest (and Buda too, for that matter).  The Thermal Baths!  As they say, getting invaded by the Turks was the best thing that could happen to them since they brought the thermal bath culture.

The Ottoman architecture fits well in Budapest, but the baths… oh, the baths… these are a wonderland of bikini, old saggy people, and a few cuties.  Oh, yes… and warm, healing waters in a good architectural environment.

You should not miss Széchenyi (pronounced, say-jenny) Thermal Baths – the largest in Europe.  Its pools are outdoors yet enclosed.  So if you’re up for a little sun or even some chilled air, then soak up on the 100° F (38° C) water and feel the steam all around you.

While there, just walk a few minutes forward and make sure to visit the Vajdahunyad Castle (with a full moat!) in the City Park, as well as Heroes Square and the Zoo – also in the park.

The castle was pure amazement to me.  It’s easy to picture it being used (as originally used) hundreds of years ago since it is so well conserved.

Now, I want to finish with an unusual sight I enjoyed a lot.  It is the Terror House.  Two parts informative and one part spooky, this museum has the best-curated exhibition (in my opinion) that tells about two tragic periods in Hungarian history (and beyond) – the repressive rules of the Nazis and later of the Soviets.  It will give you chills!

But, to get there you have to arrive in style!  Take the Millennium Line of the Metro (The first metro line of continental Europe. It was constructed for the Millennium Celebration of 1896, commemorating the Hungarian Conquest of 896), from Heroes Square station to Vorosmarty Utca station.

It’s a regular modern train, but hey, it’s fun to say you’ve been on the oldest metro line in continental Europe!  Once out, Just look for the building with the huge letters on its ceiling spelling: T E R R O R.  Quite cute, eh? 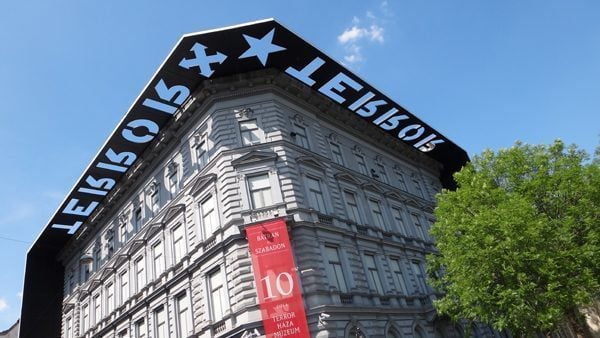 I could keep on talking about Budapest, but as you can see, this city impressed me in more ways than one – and made me laugh a lot too.

Have you been to Budapest? How has it impressed you?