Lamanai, one of Belize’s largest Maya ceremonial centers, is a Mesoamerican archaeological site located on the banks of the New River Lagoon in the Orange Walk District in northern Belize.

These ruins have a particular characteristic that is different from most Maya ruins; it is close to a body of water.

Thanks to this, Lamanai managed to have the longest occupation span of any Maya site, spanning from the 16th century BC until the 17th century AD – way after the severe drought that led to the Mayan civilization decline around 900AD and slightly after the Spanish conquest. 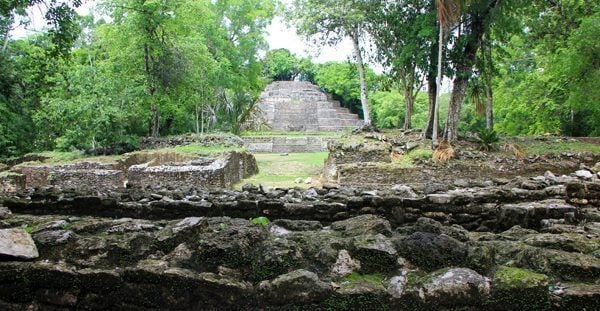 The name Lamanai comes from the Yucatec Maya word Lam’an’ain, which means, “submerged crocodile” –a name fitting to this place, as the New River Lagoon is full of crocodiles.

So, how can you get here and what are the highlights of this ruins complex?

Lamanai is buried deep in Belize’s rainforest, so the easiest way to get there is by taking a tour. I recommend this full-day tour departing from Belize City to ease your transportation logistics and to have an all-encompassing experience. Alternatively, there are also these other tours (from Belize City), you could choose from.

Should you want to get there on your own, it’s not impossible, but harder.

To get there, you must take a scenic 26-mile boat ride up the New River Lagoon departing from Orange Walk Town.

This is the easier independent way to get to Lamanai, and this hour-long journey is as exciting as Lamanai itself since the virgin banks of the river are full of local flora and fauna (great for bird watching and crocodile spotting). 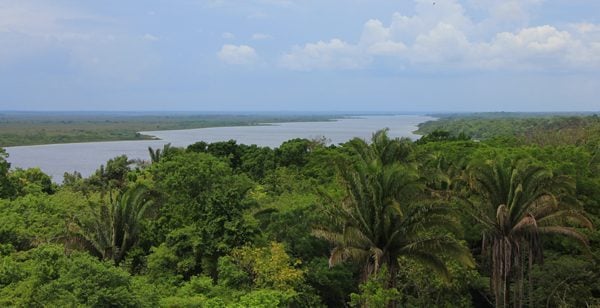 If weather conditions are not favorable, you can take a bus ride or drive to the site.  This route is almost as good as the boat ride as you will cross through the Mennonite villages and see first hand how they live.

There is also the option to stay at the Lamanai Outpost Lodge, which is just a 3-minute boat ride from the ruins.

Highlights of the Lamanai Ruins

Lamanai features the second largest Pre-Classic structure in the Maya world. Unlike many other Maya ruins, much of Lamanai was built in layers where successive populations built upon the temples of their ancestors, instead of destroying them.

While major excavations of the site began in 1974, there are still hundreds of unexcavated ruins in the nearby jungle.  But, three of the most impressive temples have been unearthed: the Jaguar Temple, the Mask Temple, and the High Temple. 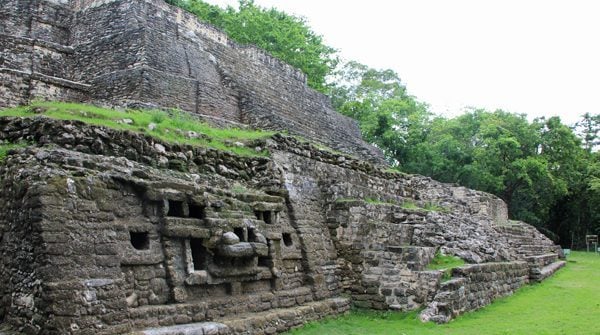 Temple of the Jaguar (Structure N10-9)

Famously known for its boxy jaguar face shape, this Early Classic temple is part of a complex of residential buildings. Several modifications on the temple attest to the Maya’s longevity at Lamanai.

Close to it, there’s a Maya calendar resting on the floor – one of the famous calendars that allegedly “predict” the end of the world on December 21, 2012. 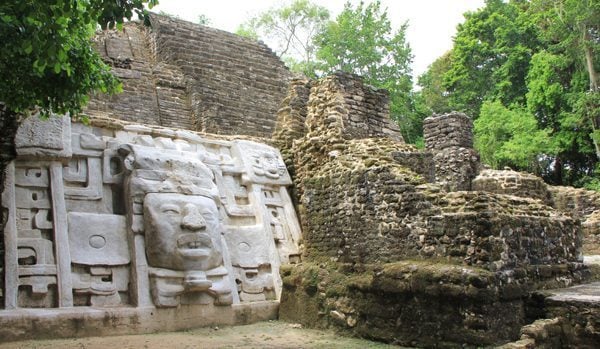 Adorned by two 13-foot carved limestone masks of an ancient Maya king, the Mask temple shows the high artistry of the Middle Early Classic and Late Classic periods of the Mayas – between 200 BC and 1300 AD. Excavations of the temple have revealed two burial tombs. 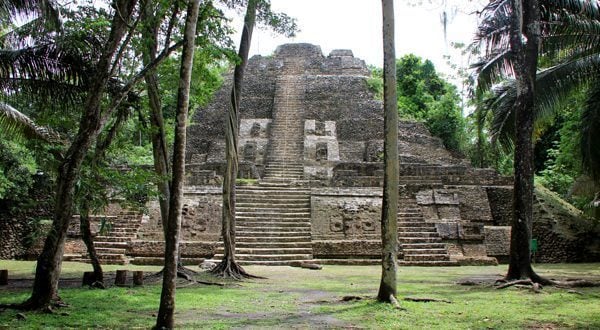 This is the tallest temple at Lamanai, rising 125ft above the jungle canopy and offering a panoramic view from its summit.

Excavations indicate that construction of the structure began as early as 100 BC and that it was a ceremonial temple built in a residential area.  You can climb to the top but care must be taken as it is a very steep climb, but the forest view is beautiful.

Other Interesting Sights in the Lamanai Ruins

Although Lamanai’s ball court is one of the smallest in the Maya world, it features the largest marker found to date.  Underneath it was found a ceremonial vessel containing liquid mercury, believed to have come from Guatemala. 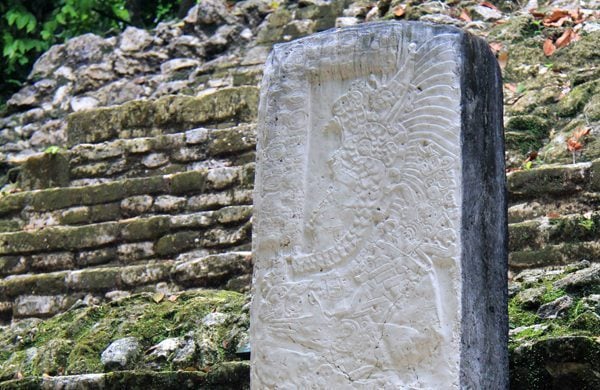 This stela, located in Structure N10-27, was erected in 625 CE in the Yucatec language of the Maya. This Late Classic stela represents Lord Smoking Shell and celebrates the anniversary of the lord’s reign and the conclusion of the year.

The burials of five children ranging in age from newborn to eight years old were discovered beneath the stela, indicating a site of high significance since human offerings are not usually associated with the dedication of monuments. 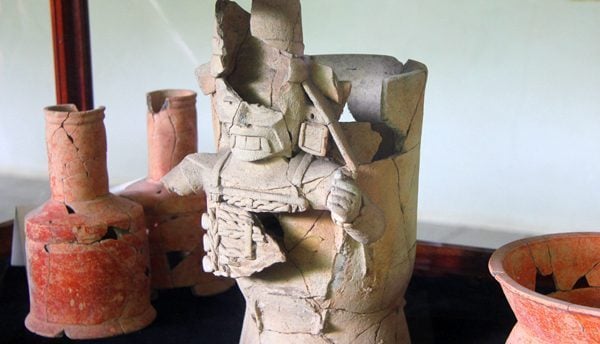 The small museum exhibits pottery, obsidian and jade jewelry, flintstone figurines, and information on the historical development of Lamanai. This is a good place to start your visit since the general overview helps you understand the importance of the site.

Unlike many other Mayan sites, the Maya inhabited Lamanai until the arrival of the Spanish in the 16th century.

In the museum, you can see art, figurines, and pottery (like the piece shown above) that depict the strained relationship between the Mayas and the Spanish when the Spanish friar’s attempted to convert the Mayas to Christianity. 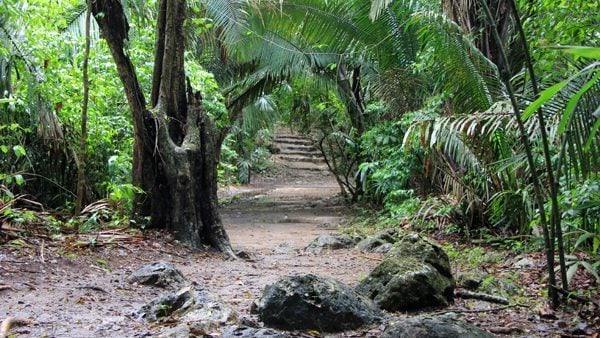 Last but not least, the jungle itself is an interesting sight, as it is comprised of giant Guanacaste and Breadnut trees, Allspice, Strangler Figs and Belize’s national flower, the Black Orchid.

Many Ceiba trees are full of howler monkeys relaxing on its branches, as well as Toucans and countless other bird species.  And let’s not forget the crocodiles –the most important and sacred figure of this site– but don’t worry; they stay in the water, letting you enjoy the ruins and the scenery.

As a guest of the Belize Tourism Board, I had the chance to experience Belize and the Maya culture. While my trip and accommodations were sponsored, the opinions expressed herein and photos used in this post are solely my own.