As one of the world’s most scenic coastal drives, the Great Ocean Road should be a bucket list item for anyone visiting the state of Victoria in Australia.

Due to its proximity to the city of Melbourne, this adventurous and diverse road trip is not only accessible but also relatively easy to plan.

This road starts on the east in Torquay and winds along the south-west coast of Victoria for 244 kilometers until it reaches Allansford on the west.

As you drive, you’ll traverse dozens of beaches, rainforests, and stunning limestone and sandstone cliffs – including the famous Twelve Apostles.

To tackle this long, yet visually striking road, here I’ll share with you how to plan a road trip along the Great Ocean Road, and hot to make the best of it.

While it’s possible to do it as a long day trip, it is not recommended doing the Great Ocean Road in one day. With 244kms each way, and with dozens of potential stops along the way, this is one road trip that deserves at least a few days. 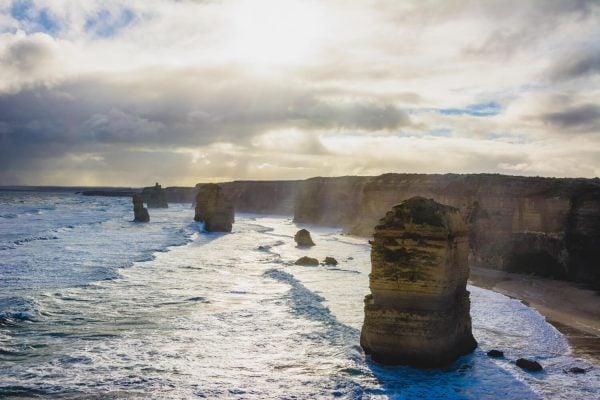 You don’t want to be stuck in your car driving all day just to see the Twelve Apostles and then back to Melbourne, right? For that reason, it is recommended to at least break the trip in two, preferably three days or more.

Take your time to admire the scenery at each lookout, enjoy your time at each small town, walk through nature and spot the native wildlife, and so on.

2. Research Where to go Before and During the Trip

As with every trip, do your research before starting the trip. Familiarize yourself with all the stops you want to do and split your trip in as many days as you want, based on how much you want to see. This will help you plan your accommodation in advance. 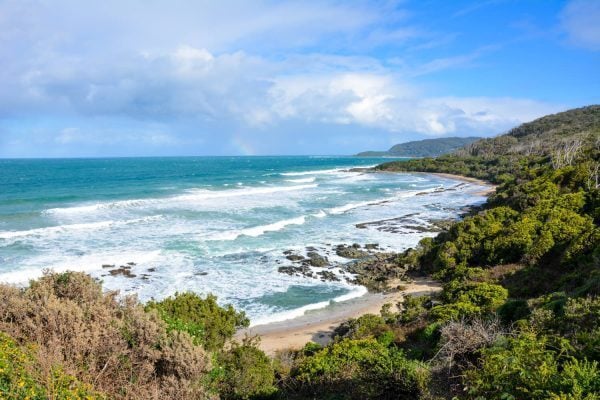 For example, I also searched on blogs and forums like TripAdvisor to get inspiration and to replicate or mimic a few stunning images of some of the most famous sights, as well as discover a few other sights that I overlooked during my preliminary research.

Also, don’t forget that some of the best travel experiences are those not found in guidebooks, so be open to taking detours to taste that unnamed restaurant, relax at that deserted beach, and hike those other nature trails. Discover and explore further with your adventurous spirit.

Unless you’re in Melbourne and are only interested in seeing the Twelve Apostles on a day trip, I highly recommend not doing a tour. Instead, rent a car, or even better, a campervan, so you can take your time and stop wherever you feel like spending some extra time.

Trust me, you will want to stop at a lot of lookouts and small towns! It is recommended to rent a car or campervan from Melbourne, as it is the largest city closest to the Great Ocean Road.

4. Drive it East to West

If you’re driving it between March and April, you’ll have the chance to see the famous Rip Curl Pro surfing competition at Bells Beach. 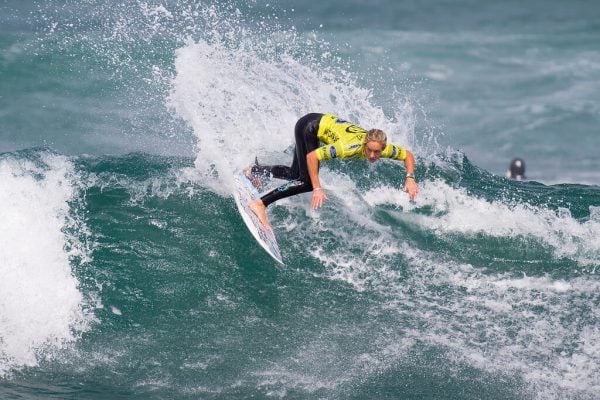 And, if you’re a surfing enthusiast, then you’ll probably know already that Torquay is the home of two of the most famous surf brands: Rip Curl and Quicksilver. Pro surfers love this beach! So, why not take some time to surf or take some surfing lessons while you’re there?

But, the primary reason to drive it east to west is that you’ll be driving on the left side of the road – closest to the ocean. This will allow you to pull over easily to stop at all the viewpoints.

5. Know When to Drive the Great Ocean Road

As beautiful as this road can be, timing can make or break your trip. The best time to do the Great Ocean Road is during the summer months and autumn (in the southern hemisphere) – from November to the beginning of May.

If possible, avoid the Christmas and Easter weeks, or any other holiday week/weekend as these tend to be very busy.

Should you not be able to go during these months, June to October is still good enough but could be quite cold. Also take into consideration the school winter holidays, which are from mid-September to the beginning of October.

6. Book your Accommodation in Advance

Your research and planning should give you an idea of where you’ll end up each day to book your accommodation beforehand. Booking in advance is highly recommended especially if you’re traveling during the summer months –which is the best time to go– as accommodation can get very busy.

This site has several recommendations on where to stay along the Great Ocean Road. 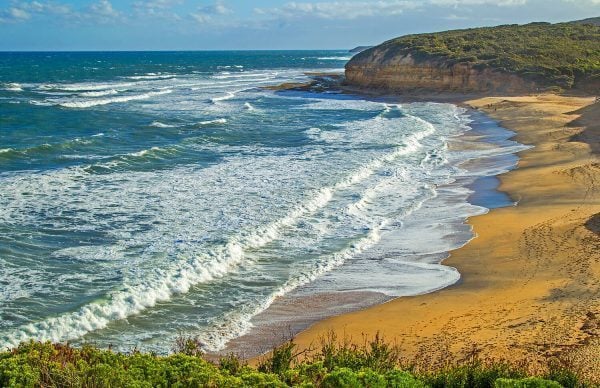 7. Leave Some Wiggle Room in your Schedule

As mentioned before, you’ll discover some additional things to see and do as you drive, so allow some extra time on your schedule to explore these new things or to give yourself the flexibility to spend some extra time in the places you’re enjoying the most.

8. Try Doing the Twelve Apostles for Sunrise or Sunset

While there are tons of things to do along the way, the Twelve Apostles are the reason why most people do this road trip.

These massive limestone structures, formed over 20 million years ago through erosion, tower up to 45 meters above the ocean and stand next to a 70 meters high limestone cliff. It’s quite an impressive view! Even though it is called the Twelve Apostles, only eight “apostles” are still standing.

To enjoy the apostles to its fullest potential, try arriving for sunrise. Not only you’ll see the spectacle of the sun rising and bathing the towers in a cool morning light, but you’ll also beat the tour buses and have the place almost to yourself. 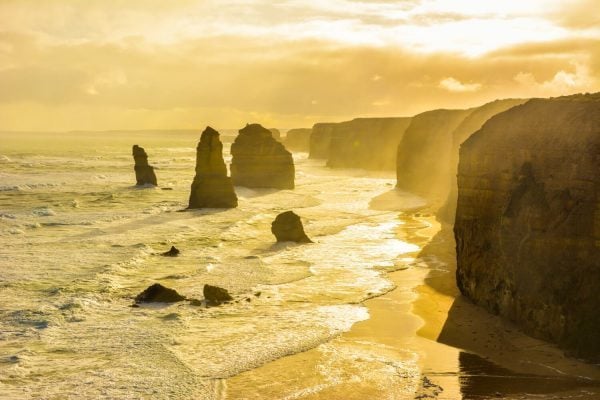 Also recommended is the sunset. While more crowded than the sunrise, it is quite striking seeing the sun setting over the ocean with the shaded silhouettes of the apostles in the foreground.

Walk the boardwalks along the cliff tops to see various points of views of the apostles.

9. Don’t Miss these Other Highlights

While the Twelve Apostles are the stars of the show, there are other highlights worth mentioning:

In the park, you’ll also find the Loch Ard Gorge, which is considered one of the most beautiful beaches on the Great Ocean Road; and The Grotto, which is basically a pool formed on a sinkhole next to the ocean that produces a beautiful view during low tide.

Also worth mentioning are the London Arch and The Arch. Both are naturally formed limestone arches carved by the power of nature. 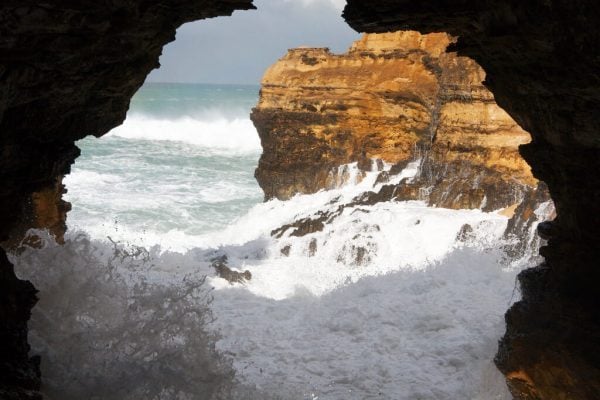 If you want to see koalas in the wild, then the Kennett River –along the Grey River Road– is your best option. As a good alternative, there’s the Otway Lighthouse Road, where you can also see the koalas sleeping on the trees by the side of the road or in the middle of town.

A tip: If you’re in town and see a bunch of people looking up, they are probably Koala-spotting too. Just follow their gaze. 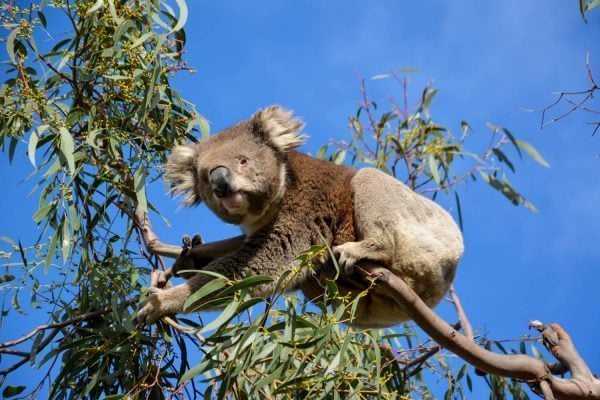 Bay of Islands and Bay of Martyrs

Another set of rocks rising out of the ocean that unfortunately lives on the shadows of their most popular sister, the Twelve Apostles. If you have the time and are passing past Peterborough, spend some time here as they are just as beautiful as the rest.

Change the scenery a bit by heading inland to immerse yourself into a forest full of tall trees, giant tree ferns, and a few waterfalls. There is a one-hour roundtrip hike to reach the platforms that will give you some of the best views of The Triplet Falls.

Lorne is one of the many picturesque towns situated along the Great Ocean Road and a great spot to spend your first or second night since it is about 140km from Melbourne. It is also a popular spot to visit during Christmas, so have that in mind if you’re around during those days.

From Lorne, you’ll start one of the most picturesque portions of the Great Ocean Road which stretches up to Apollo Bay. Be ready to stop a lot for photos!

This is one of my favorite lookouts in the entire Great Ocean Road. You can drive up to the picnic area, and from there have a short walk to the lookout, from where you’ll see the stunning view of a golden sand beach coming inland and blending with the greenery around it.

This Google map below has the Great Ocean Road marked as well as the highlights mentioned here.

10. Driving Roundtrip? Save Time on your Way Back

If you’re doing a round trip from Melbourne, as recommended previously, drive along the coast from East to West and then drive back along the A1 highway inland. This will save you a few hours of driving.

Try to not go below one-quarter of a tank before fueling up as there are portions of the road with large distances between gas/petrol stations.

12. Watch out for Wildlife when Driving

Wildlife spotting is relatively common in Australia, including the echidnas, koalas, and kangaroos – especially kangaroos. While spotting these is always a cool thing to do, be aware that they sometimes cross the road in front of you unexpectedly. 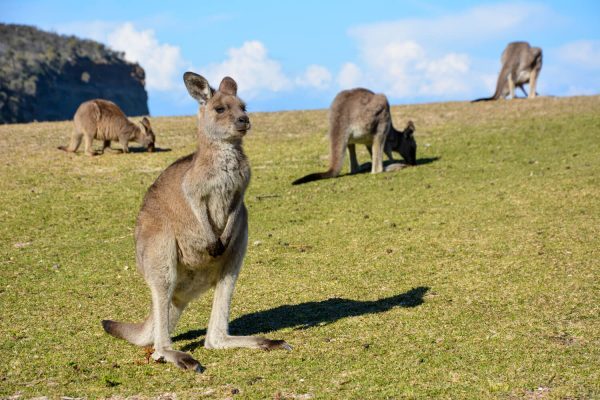 It is recommended to drive with caution, alert, and a bit slower than the maximum speed to give you more time to react should one of these animals decide to give you an up-close experience. In that case, slow down and brake in a straight line – don’t do a sudden swerve as you could roll off the road.

Last but not least, enjoy everything about this ocean road. Take pictures, but don’t forget to also live the moment! 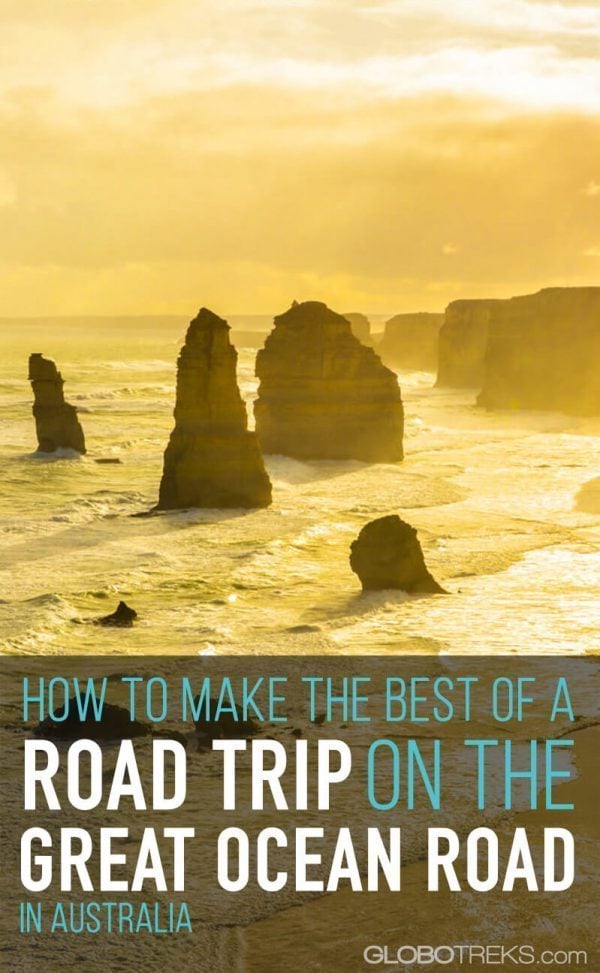 Image 3, 5, and 7 from Flickr’s Creative Commons. This post was done in collaboration with Trover, but as always, all the tips and opinions expressed here are mine.