The ancient Egyptian civilization is considered to be one of the most influential civilizations that developed many sciences and arts, including architecture.

Many of the most prominent structures, built over 4,000 years ago, still stand and conserve the detailed hieroglyphs that tell vividly the history of this empire. 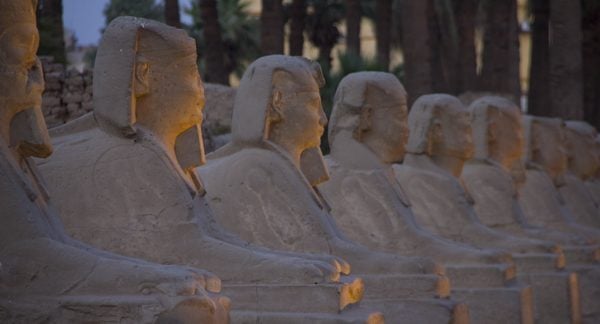 1. Been Chief of Construction

I would have been part of the elite and would have had a really close relationship with the pharaoh.

4. Built with mud and stones

Due to a scarcity of wood in the desert, my two predominant construction materials would have been sun-baked mud bricks and stones (primarily limestone, but sandstone and granite stones were also commonly used).

5. But, stones were only for some building

6. Practiced along the Nile River

Most of my most important buildings would have been close to the Nile valley since it is the source of life (water).

My buildings would have had a lot of symbolic ornamentation, such as the scarab beetle, solar disks, other sacred animals such as Anubis the jackal and Horus the falcon, and plants like the papyrus and lotus (often represented in the column capitels).

Although I would have known about the existence of the arch (from the fourth dynasty forward), all my monumental buildings would have been built with the post and lintel system. Everything would have had flat roofs made of huge stone blocks supported by external walls and closely spaced columns.

My monuments would have been like pieces of art and literature.  Most surfaces, including columns, would have been covered with hieroglyphs, pictorial frescoes, and carvings painted with vivid colors.  Hieroglyphs were not only for decoration; they were also used to record historic events, to cast spells, or to give instructions to help the deceased pharaoh navigate the underworld safely.

Many of my temples would have been aligned with astronomically significant events such as solstices, equinoxes, and even the birth of the pharaoh, among other dates.  For this, the pharaoh would have been my aide and we would have taken all measurements in a sacred ceremony.

During the Old Kingdom, my greatest challenges and masterpieces would have been in the shape of pyramids.  During the Middle Kingdom I would not have developed the architecture field too much, so no major masterpieces for me (a lot of beautiful art, though).

But, during the New Kingdom, I would have made my comeback with the grand temples and funerary complexes in Aswan, Luxor, and other places. (Between the Old and New Kingdom the construction of pyramids stopped, not because of grave robbers, as it is popularly believed, but because of construction costs.)

My builders would have probably been slaves or farmer who badly needed a job during the farming off-season.

As soon as my pharaoh was named, I would have started designing and building his tomb. Construction would not have stopped until his death.  This is why old pharaohs who reigned for a long time have bigger tombs and larger treasures buried with them.

14. Been a Master of Optical Illusions

I would have been a master of measurements and optical illusions.  Many of my temples, like Luxor Temple, would have been tweaked to make them feel bigger, smaller, or taller than what they really are.

Accidents did happen often during construction, so I would have had a doctor at the construction site to help with any injury.  Hey, I would have needed them as healthy as possible to do a good job, even if they were slaves.

My buildings would have had no mortar. I had to plan everything carefully so every stone would fit perfectly in the design.

18. Built tall buildings without a Crane

Ever wonder how I would have built tall structures without cranes?  My workers would have piled the stones from the base, and as the wall or column got taller, a mud brick ramp would have been built around it to allow workers reach and carry stones up to the new height.

Then, when finished, the ramp would have been slowly dismantled, with artists carving and painting hieroglyphs from top to bottom.

Since I would have used no mortar, all my buildings would have needed to be perfectly balanced and strong.  For this reason, the square and the plumb-line would have been my main tools and most of my designs would have been perpendicular in plan with slightly inclined walls (to make them more balanced by lowering their center of gravity).

Maybe I would have joined the list of “immortalized” architects, like: Imhotep of the Step Pyramid complex, Hem-iunu of the Great Giza Pyramid, Senenmut of Deir el-Bahari, and a few others.

Oh, and there was no competition in my field back then, so I would have been considered pretty exclusive and in some cases even commemorated with hieroglyphs and statues.

Do you have a favorite Ancient Egyptian monument?