7 Things Not to Miss in Aswan

Aswan, one of the furthermost southern, hottest, and driest cities in Egypt; presents an environment that besides being hot and dry in nature, is full of culture, Egyptian history, monuments, and a thriving market life.

Of the major touristic cities in Egypt, Aswan is, in my opinion, the one that still keeps a sense of slow pace and warmth that allows you to experience the city without much hassle.

Here are 7 things you should not miss while in Aswan.  And believe me, you won’t want to miss them.

Arrive by boat to the Philae Temple 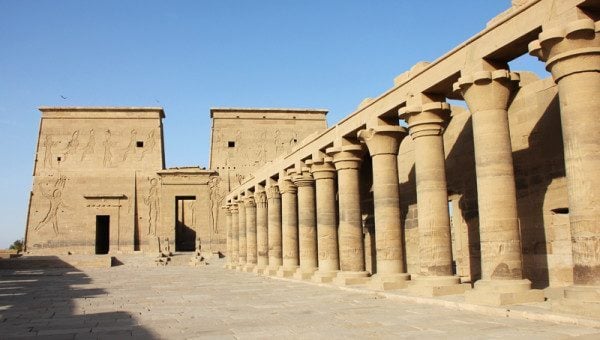 The Philae temple is an Egyptian temple built during the Ptolemaic dynasty.  Its principal deity was Isis, but smaller shrines and surrounding temples were dedicated to Hathor and Harendotes.

The temple’s intriguing new kingdom architectural features and details are equally matched by its interesting and chaotic history.

The temple was formerly located in the Philae Island in Lake Nasser but in 1971 it was relocated by UNESCO to nearby Agilkia Island after the site was partly flooded by the construction of the Aswan Low Dam.

Philae also has a Christian history behind it. Ruins of a Christian church were found there and more than one adytum bore traces of having been made to serve at different eras the purposes of a chapel of Osiris and of Christ.

Today, you can see the intense mutilation of most hieroglyphs on the left side of the temple (Christians believed the side of the heart should be purer and not contain pagan images).

A visit to the temple by boat presents you with one of the most beautiful sights in the Lake Nasser area. Try going during the late afternoon to enjoy the sunset view. 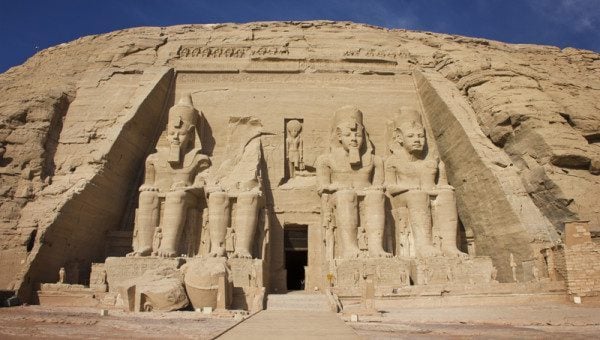 While not exactly in Aswan, Abu Simbel is a temple that must not be missed when in the region. Three hours away from Aswan (the closest city to it), Abu Simbel stands as the powerful icon that represents the best of Ramesses II (and his ego). Aswan is the departure point for all convoys visiting Abu Simbel.

These two massive rock temples were carved during the 13th century BC, as a lasting monument to Ramesses II and his queen Nefertari, to commemorate his alleged victory at the Battle of Kadesh, and to intimidate his Nubian neighbors in the south.

The larger temple (Ramesses’) is dedicated to Ra-Harakhty, Ptah and Amun, Egypt’s three state deities of the time, and features four large statues of Ramesses II in the facade.

The smaller temple (Nefertari’s) is dedicated to the goddess Hathor, personified by Nefertari, Ramesses’ most beloved of his many wives.

Just like the Philae Temple, after the construction of the Aswan High Dam, the temple had to be cut in pieces and puzzled back together on higher ground. Otherwise, it would have been lost forever under the new artificial lake.

The interior of both temples at the site are beautifully carved and painted in the traditional Egyptian hieroglyphic style.

The interior spaces are worth admiring for their artistic expression, and the exterior for their monumental size. You’ll feel so small next to Ramesses’ colossal statues!

Relax in a Felucca Ride 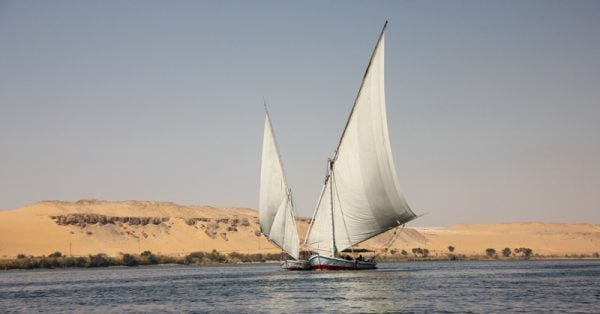 I highly recommend doing a one or two days felucca ride as it is a peaceful way to enjoy the Nile, Aswan, and the riverbank villages that you wouldn’t see or interact with otherwise.

On the Felucca, things happen spontaneously and you never know whom you’ll meet along the way. It’s quite an interesting ride.

But, here’s my warning… If you go alone, it can get a bit boring, so take a book; and whenever they tell you that you can get from Aswan to Luxor by Felucca… that’s not quite true!

Feluccas can’t navigate that long distance in one or two days. But still, the whole journey is an experience worth having.

Do a picnic at the Botanical Garden

Right next to Aswan, in the Nile River, is Kitchener’s Island; home to the Aswan Botanical Garden.

The island was given to Lord Kitchener as a reward for his services in the Sudan Campaign (1896-1898). Soon after that, Kitchener rapidly transformed the small island into a paradise of exotic trees and plants in carefully manicured gardens with multiple walkways.

When the island passed to the hands of the Egyptian government, it was used as a research station for examining different food and cash crops.

What you see today is the product of the work performed by Lord Kitchener and expanded by the Egyptian government.

The gardens on the island are very popular among locals to do picnics or just to walk around in a quiet and beautiful environment.  You can reach the island by felucca or motorboat from Aswan’s pier.

Observe the lifestyle of the Nubian village at Elephantine Island 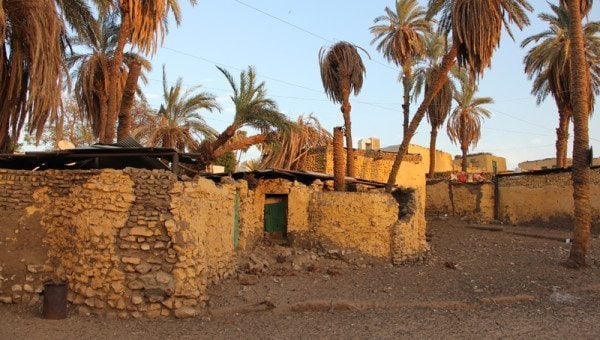 Elephantine Island is another island located on the Nile, right next to Aswan.  There, you will see an authentic Nubian village that has preserved its lifestyle (for the most part) up to this day.

There are no paved streets, houses are cluttered and accessed through alleys, goats and other animals roam around freely, and people perform their daily tasks almost as if they hadn’t changed in the past 100 years.

It is said that the island may have received its name after its shape, which in aerial views is similar to that of an elephant tusk. But, another theory says that the island is named because it was a trading center in the ivory trade.

Spend an afternoon, or more, walking around the village, talking to its residents, enjoying the Nubian traditions, and visiting the ruins of the Temple of Khnum. 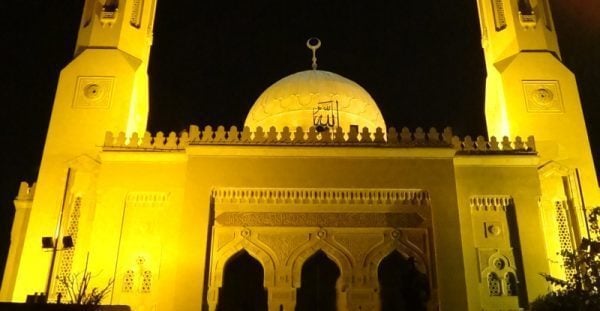 This mosque might not be the most impressive mosque you’ll ever see, but it is an icon standing on a hill in Aswan. You can see its tall minarets from various parts of the city.

The mosque follows the traditional architecture of central-dome mosques.  Its entrance is shaped with three decorated high arches and flanked by two minarets.

During the day you can see its scenic gardens and during the night you can see the yellow reflection of the lighting beamed on the façade.

Immerse yourself in the Night Market 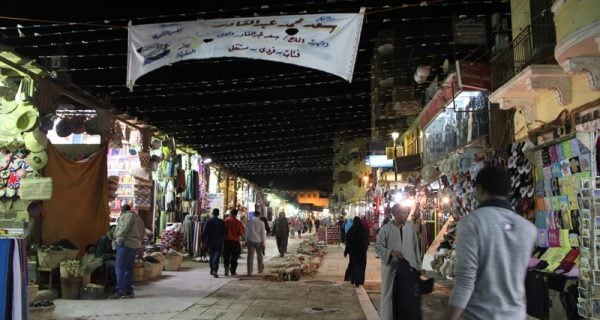 This outdoor market is a central feature of Aswan and where all the activity happens. Spices, Nubian baskets, textiles, jewelry, souvenirs, and clothing are only a few of the items available here.

There’s always a crowd bustling with energy and the life on its narrow lanes make this place an interesting place to be, even if you’re not buying anything.

Walk around, eat the local food, listen to music, talk to the sellers and drink tea with them. And here’s one thing, you must be good at haggling to get things at a good price.