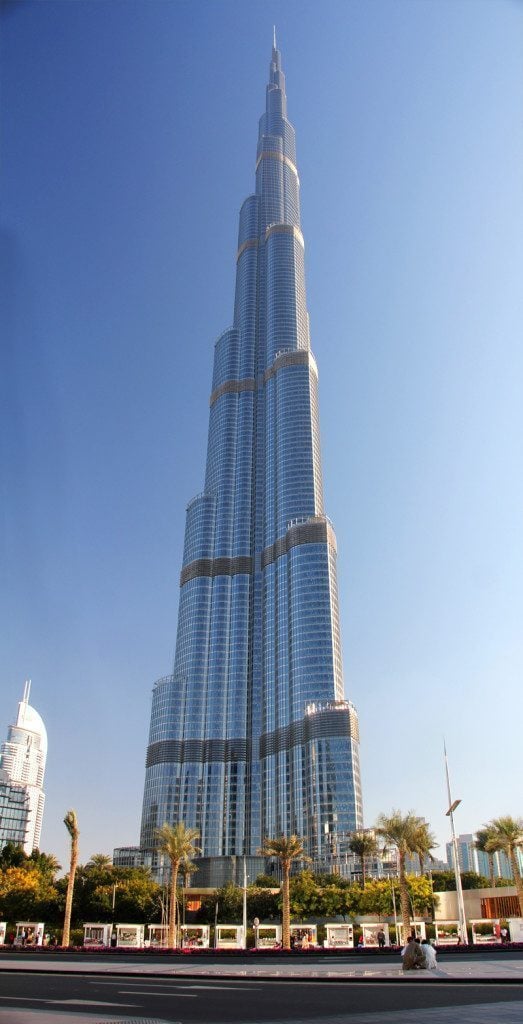 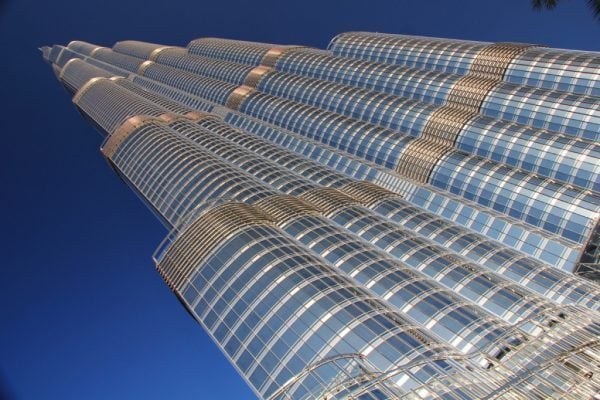 Burj Khalifa, formerly known as Burj Dubai, is currently the world’s tallest building – reaching 829.84 m (2,723 ft).  It is located close to Dubai’s financial area in a development known as Downtown Dubai.  The tower itself is the centerpiece of this large-scale urban development that includes the Dubai Mall, 30,000 homes, nine hotels, 7.4 acres of parkland, at least 19 residential towers, and the 30 acres man-made Burj Khalifa Lake.

The tower was designed by Skidmore, Owings and Merrill, an architecture firm that has a respectable high-rise portfolio that includes the New World Trade Center Tower, Willis Towers, and others.  Just like the Petronas Towers, which currently hold the title of world’s tallest twin towers, the design of Burj Khalifa is derived from patterning systems found in Islamic iconography and architecture. The building construction was between 2004 and 2009, with the inauguration being in 2010.

Just standing at the base of the building makes you feel so small.  I compare this feeling to how an ant must feel when it sees a human.  While the building is immense in height and size, it doesn’t feel bulky or heavy due to its well-designed massing that sets back in a spiral as it goes up.  This makes the building feel lighter, more delicate, and pleasing to the eye.

When traveling to Dubai, it is almost impossible to miss or not to stare at the tower since it is such an iconic piece that does stand out from the rest of Dubai’s skyline.

The real purpose of the construction of this tower was to create an iconic piece that would draw tourism to Dubai, shifting the economy’s full dependency on oil by generating income through tourism.  In my opinion, it worked to some degree because while tourism has grown significantly and the building had become Dubai’s icon, it is nonetheless an “empty” icon.

Still, to this day, the building is mostly unoccupied (about 85%) due to the fact that the tower was finished at the end of the global financial crisis, that also affected the United Arab Emirates and the over development of Dubai that surpassed the demand of residential units.

Fun Fact: Burj Khalifa returned the location of Earth’s tallest freestanding structure to the Middle East where the Great Pyramid of Giza claimed this achievement for almost four millennia before being surpassed by the London Cathedral in England in 1311.