The day started like any other day in the rally. We were parked next to a petrol station in the outskirts of a small village in Southern Russia. Alex slept on the driver’s seat of the car while Stephen slept on the passenger’s seat and I on the rear seat.

Alex and I woke up at around 8:30 am and started the day’s drive. Stephen was still asleep (as usual).

We continued our way using Google maps as our guide (which is technically cheating in the Mongol Rally ), but we wanted to take the “easiest/quickest” road to save time on our 3 days drive to Moscow.

The road we transited was a straight two ways, single-lane road surrounded by farms and fields. At about 9:30 am, we were driving probably at about 50 mph on this road until a sharp, and badly labeled, 90° turn suddenly appeared in front of us.

It caught Alex and me by surprise. Stephen was still asleep.

I realized something serious was about to happen as Alex shouted, “OH SHIT,” and sharply turned the steering wheel to the right.

The tires screeched and the car turned to the right in a strong motion. For a split second, I thought we would make it unscathed, until I saw we were heading straight into a truck.

Alex strongly held the steering wheel to the right with hopes of avoiding a crash. 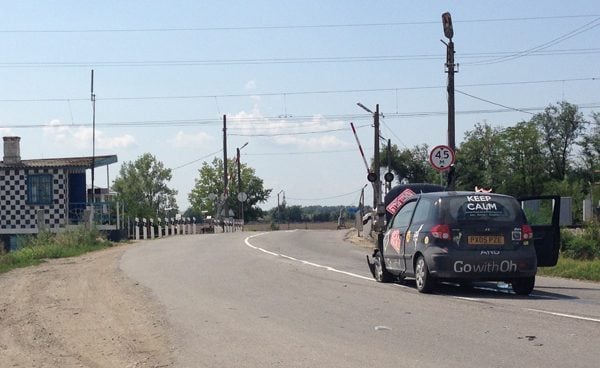 Both vehicles collided on their left side, with our front tires smashing against the rear tires of the truck.

It was a sharp sound that I could just describe as 10000 aluminum cans being crushed in an instant.

The airbags exploded, releasing a light cloud of white smoke with a loud popping sound.

After the actual collision, both vehicles continued moving forward until their inertia depleted.

Alex immediately got off the car and I followed behind. Stephen was in shock. He literally woke up during the crash.

Thankfully we were all wearing our seat belts, so we had no injuries except for really small scratches made by the seat belts and airbags.

Once out, I immediately looked at the left side of the car to asses the damage. The front panel was completely peeled off the car, the front left tire exploded and was pushed off its axis, and a few more mechanical stuff I don’t know about we’re broken too.

Our car, Lizzy, was badly hurt.

The truck driver, Akhmoud, got off his truck and after looking at the damage started yelling at us (which is quite understandably). His truck’s rear left tires, suspension, and axis were broken.

Of the three teammates, I was the one least shook by the accident. I was completely calm so I immediately documented the accident with pictures and videos.  Alex, while not in complete shock, felt really bad since he considered he ruined the rally for us. Stephen was still in shock and barely talking to us. He just looked at everything very slowly and quietly. 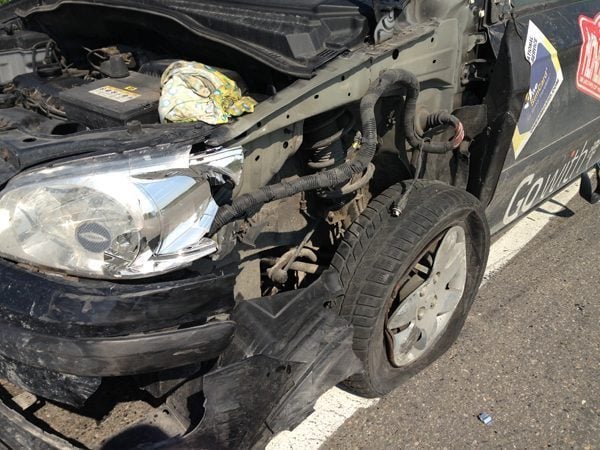 We waited over an hour for the police to come since the locals tried to find a policeman who spoke English. In the meantime, a few passersby stopped to see the accident and even offered us watermelon and water.

During the rather long wait, Stephen started talking to us about his fear of us getting in trouble. Would we be arrested for not having the mandatory car insurance? (We crossed the border at 11 pm the night before and the accident happened first thing in the morning. We had no chance to buy car insurance.) Would the police be crooked and try to mess with us for money?

Other than police-related questions, we asked ourselves; “what now?”

Could we fix the car and continue the rally? Would this be it and fly home?

Apparently, everyone in this region is a mechanic, so every single passerby looked at the car and pointed to broken stuff. One of them gave the verdict; “fly home,” when he spotted that our transmission was broken and leaking fluid all over the pavement.

This wasn’t looking good for us. Fixing the transmission is quite an expensive job and we don’t have the money for it, and that’s not counting the money we have to pay Akhmoud for his damages.

The police finally arrived. They didn’t speak English. We had no idea how to communicate with them other than with body language.

A woman named Anna, who happened to just be there looking at the crash, saw that we were lost in translation so she offered her help by translating. Her English was good enough to help deliver the message to all three parties.

Anna helped us for a while before she had to leave, but before she bid us goodbye, the offered us to stay at her home if we needed and to show us around the town of Prokhladny (near where the accident happened). We were extremely thankful.

For a while, Alex dealt with the police and Akhmoud, while Stephen and I waited for what seemed like two hours of a slow process. 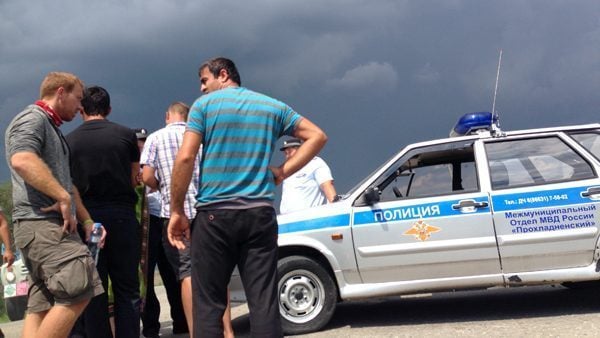 We found out through the police that we were driving in the completely wrong direction to Moscow (even when following the map accurately). Google maps was sending us to Chechnya!!!

In the end, we agreed with Akhmoud to do everything off-police and that we would pay him cash for the truck repairs.

Remember that I said everyone is a mechanic here? Well, he is a mechanic too and he said his repairs would total $1500. We didn’t believe him and thought we were being scammed, but we had no choice but to accept that.

Anyway, we didn’t have that amount of money with us, so we gave him the $486 we had in cash and the rest we’re supposed to Western Union to him (we’ll see if he contacts us for it since we don’t have any of his information).

We were done with Akhmoud, but we were still far from over with the police. By law, if you enter Russia with a car, you need to exit with such car or else you will be forbidden to leave, or pay import taxes of $5000.

We didn’t want that, so we had to make sure that we either disposed of the car properly or fixed it (which didn’t really seem to be an economically feasible option at the moment).

We needed the police to “impound” the car and write it off properly so we could leave the country with official documentation.

In addition, when you crash in Russia the police is supposed to confiscate your driver’s license, passport, and car documents; but since we were in the small town of Prokhladny and the police were quite intrigued by our rally efforts, they didn’t care about the confiscation and treated us with their best service. They really don’t see foreigners at all in the area, much less foreigners crashing next to their town.

At about 1:00 pm we had a bit of a strange moment. A tow truck picked up the car (poor Lizzy, that was sad to watch) and headed in one direction while the police left in the opposite direction with Alex’s documents.

We were left at the scene with no idea of what to do.  To make things even more uncomfortable, my passport was inside the car and I had no idea where it was headed to. 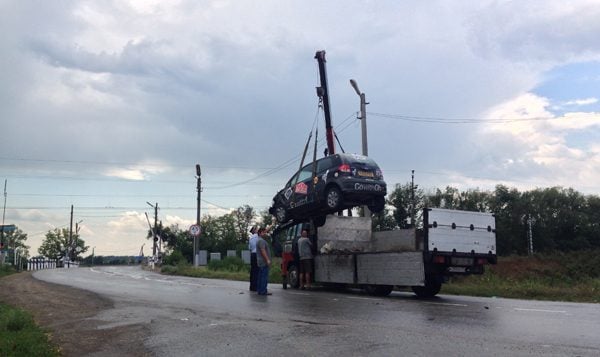 After a while, a guy named Zaur came to us and explained in English that everything was ok, the car was headed to the police car lot in Prokhladny and the police car would return soon to pick us up and take us there.

They returned and it was time to ride the back seat of the police car to the station. The ride pretty much went like this:

But before arriving at the station, we stopped at a local restaurant and had lunch with the policemen. They treated us with a good typical meal (we were starving!) and had a few laughs with them. Turns out their nicknames were Cobra and Cheese. (Cool nicknames for Russian policemen!)

The afternoon followed with a long session of formal paperwork at the police station, aides by the extremely helpful translation from Zaur, who dedicated the rest of his day to help us, no strings attached.

On a side note, the police (and everyone else in the town) were so intrigued and impressed by the rally that they even helped us find a car to buy either locally or on the internet, but they all turned out to be too expensive.

Finally, at around 5:00 pm, we made the final decision to let the police keep the car so we could have proper documents of disposal. Fixing it would cost us around $3000 and take at least 10 days of work (we had neither).

We picked all our bags and equipment from the car and said our last goodbye to Lizzy. She was a rally champ.

We officially had no car.

By the end of the day, Zaur took us to the nearest hotel so we could rest and debate our future as a team.

Would we finish the rally? If so, how?

We weren’t sure of anything, but one thing was for sure… We didn’t want to give up.

Read the next post about our Mongol Rally experience!