If you had ever told me that I would walk with a lion in the open African Savanna, I would have told you “you’re crazy!” But, turns out I did!

When I was in Zambia I saw this irresistible tour with Mukuni Big 5 Safaris that takes you out in the open to not only walk with lions but also to ride the African elephants and walk cheetahs like dogs. 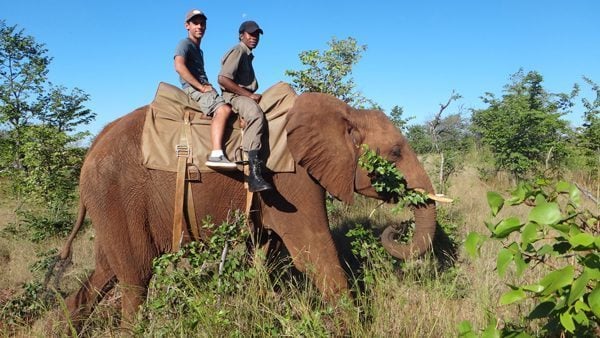 The next day I was on a jeep and on my way to their location, just outside of Livingstone. The first thing we did was a smooth, one-hour elephant ride where I learned a lot about African elephants, and especially about Mary, my elephant.

The first thing the guide told me was to hold a stick he handed me.

“Great, a twig is what’s supposed to save me against a lion!”, I replied sarcastically.

Well, while the stick was supposed to “protect” me, it actually made me a bit nervous because it made real the apparent danger of being face to face with a lion. What if the lion thinks I’m going to hit him with the stick?!

Anyways… we walked on and in less than five minutes we found them. There were Simba and Nelly, two young lions, sleeping under the shadow of the trees.

They were beautiful! A white lion and a golden one.

The guide got close to them and started petting them. The lions seemed to be very friendly, which made me feel more comfortable as I got closer to them.

Then… my time to pet them came. 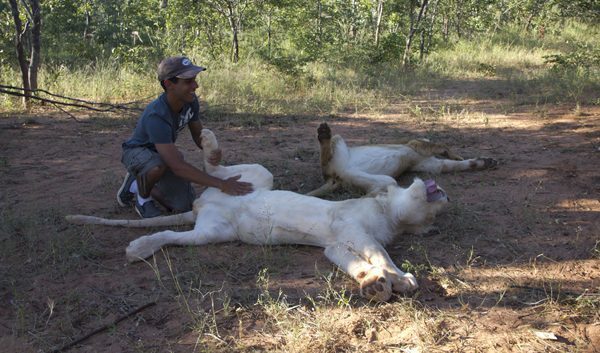 “Never touch their face and always stand behind them or their side, not in front”, was the first recommendation I got from the guide, followed by; “never put your camera on the floor… the lion will think it’s a toy and you will lose it”

As I got closer to the golden lion I crouched as to not look like a “tall, menacing” creature getting close to him. Instead, crouching made me look “friendlier” and less intruding.

Then, the first touch.

Petting the lion felt funny at first. It was like petting a cat, but with greasier, thicker, and dirtier hair. I could feel his belly go up and down with every breath, the tension on each muscle of his legs, and the puffy hair of his tail.

The initial rush went away and the rest of the petting was as smooth as if I was petting my dog.

Then I switched to the white lion and the experience was similar, only that the white lion did want some real petting, so he rolled upside down and he was all belly up. “Pet my belly!” he would have yelled to me had he been able to speak. (as in the image above)

Luckily there was no need to use the stick, even though every now and then they looked at me intently as if thinking; “Who’s this idiot touching me?”

After the petting time came the walk. The lions got up and along the walk back to the camp I got some precious time walking them, holding them by the tail, and rubbing their back as they walked.

This was crazy! I was holding a lion by its tail as it walked freely! No leach, no fence!

I enjoyed every minute of the walk, but the fun didn’t stop there. The lions wanted to play a bit between themselves, so they gave us a first-row show of them interacting, biting each other, and playing on the grass. 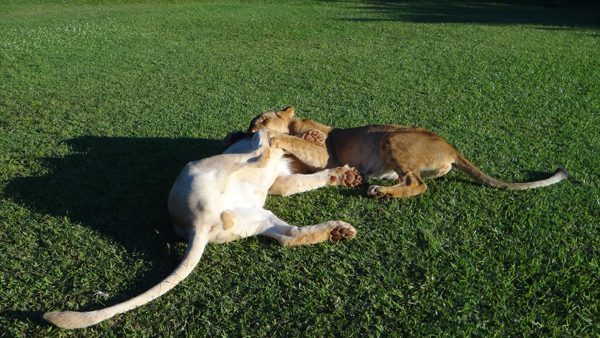 Back at the camp, the fun wasn’t over. The cheetahs were waiting for us. Now, walking a cheetah if different than walking a lion. Cheetahs are FAST!  Did you know they can run up to 120 km/m?

With a leach on, I got to walk Suzie. She didn’t mind me much and didn’t pay much attention at first (making my walk harder than necessary), but eventually, she eased on me. 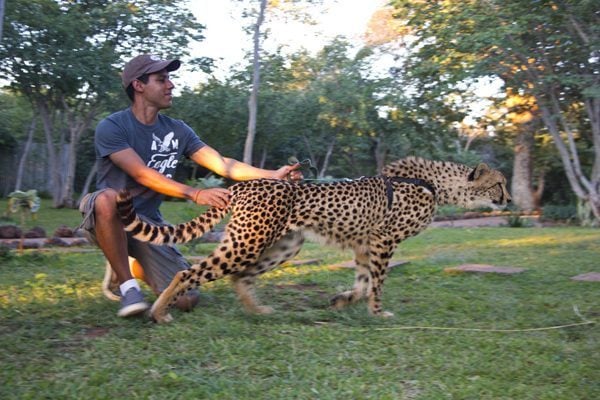 It’s funny when you pet them and they start purring (yes, they are the largest feline that can purr). The vibration of the purr is way more intense than a cat’s purr. Such a weird feeling.

Also, different from lions, you can pet cheetahs on the head and they can even lick you!

Now, a cheetah’s tongue is the roughest thing that has ever licked me. It’s like rubbing rough sandpaper on your body. It can actually hurt a bit if licked too much on the same spot. But hey, I was licked by a cheetah!!

Would you dare walk a lion and a cheetah?