Istanbul is famous for its Mosques and Ottoman architecture. As the capital of the Ottoman Empire since 1453 and the largest city in Turkey, Istanbul is home to over 3000 mosques.

This makes it overwhelming to decide which ones to visit, but here are seven of the most important mosques in Istanbul you should see based on their architectural character and historical context.

This 17th-century mosque, facing Hagia Sophia, is famous for its beautiful blue tile work ornamenting its interior walls. Its six slim minarets distinguish it from other mosques, which normally have two or four minarets.

It was built from 1609 to 1616, during the rule of Ahmed I. Like many other mosques, it also houses the tomb of the founder, a madrasah and a hospice.

While still used as a mosque, Sultanahmet is one of the most popular, and important, tourist attractions in Istanbul.

Sultanahmet is considered to be the last great mosque of the Ottoman classical period, as it is the culmination of two centuries of both Ottoman mosque and Byzantine church development.

It incorporates some Byzantine elements of Hagia Sophia along with traditional Islamic architecture. 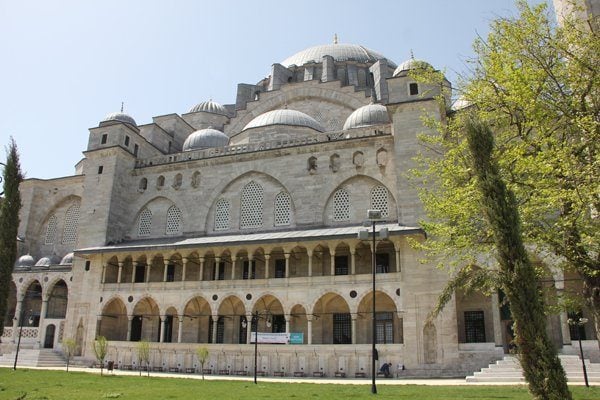 The Süleymaniye Mosque is the second largest mosque in Istanbul, and one of the best-known sights not only in Istanbul, but all of Turkey.

This outstanding mosque was built in the 16th century by the famous Ottoman architect Mimar Sinan for Sultan Süleyman the Magnificient.

It combines tall, slender minarets (typical of Ottoman architecture) with large domed buildings supported by half domes in the style of the Byzantine church Hagia Sophia (which the Ottomans converted into the mosque of Aya Sofya).

The design also plays on Süleyman’s ‘second Solomon’ ego, as it references the Dome of the Rock, which was built on the site of the Temple of Solomon. The courtyard is of exceptional grandeur with a colonnaded peristyle.

The tombs of the Sultan, his wife Hürrem, and Mimar Sinan are found within its compounds. It is the largest mosque in Istanbul with four minarets (but not the largest overall). 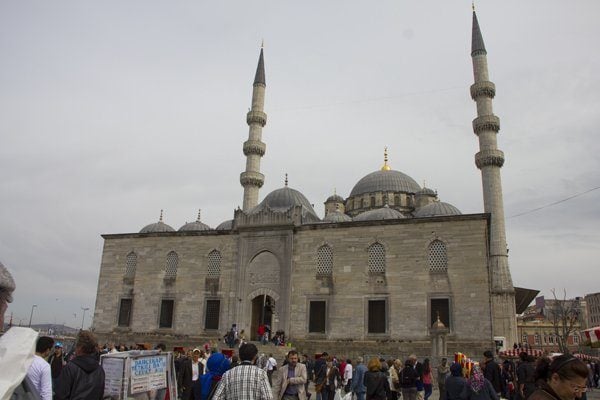 This mosque was ordered by Safiye Sultan, who was the wife of Sultan Murad III. Construction began in 1597, but due to political troubles construction stopped halfway.

The partially constructed structure fell into ruins and was largely destroyed by a fire in 1660.

Later that year, the imperial architect Mustafa Ağa suggested that Valide Turhan Hadice, mother of Sultan Mehmet IV, should complete the project as a work of piety.

The mosque was finally finished in 1663. Today it is one of the most well-known mosques in Istanbul.

The interior of the mosque has great examples of Ottoman tile work, known as İznik tiles (blue tiles that bear the name of the town from where they are made) – but, the best samples of İznik tiles can be seen in Rüstem Pasha. 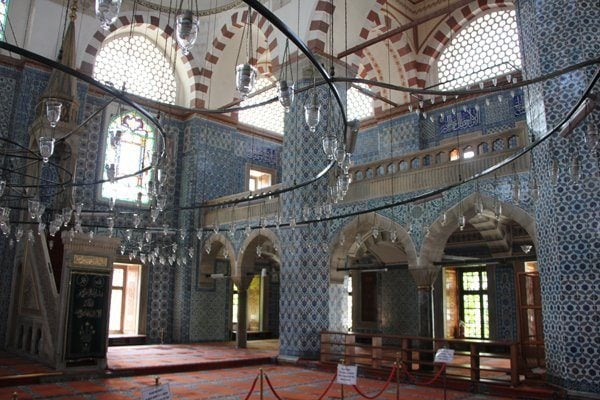 Rüstem Pasha is a mosque commissioned by a businessman, Grand Vizier (minister) of Suleyman’s court, and military man –bearing that same name– who spent his wealth raising public buildings, mosques, and charitable foundations.

It was built between 1561 and 1563, and it contains the best samples of İznik tiles in all Istanbul. Iznik Tiles are a distinctive signature of Ottoman decoration, which have a strong relationship with the politics, propaganda, and empire building of the period in Ottoman history. 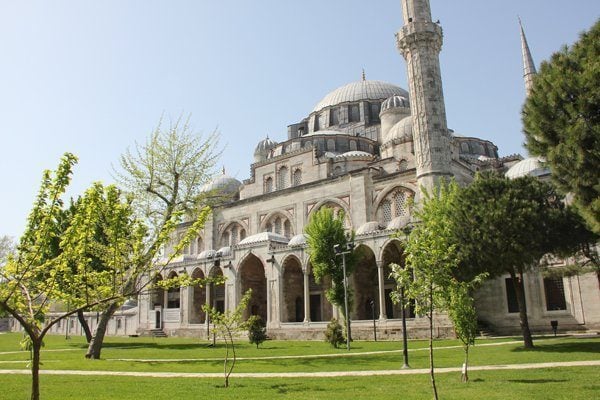 The Şehzade Mosque, or “Prince’s Mosque”, was commissioned by Sultan Suleiman I in memory of his eldest son by Hürrem, Prince Mehmet, who died of smallpox at the age of 21 in 1543.

It was the first major commission by the Imperial Architect Mimar Sinan, which was completed in 1548.

It is considered by architectural historians as Sinan’s first masterpiece of classical Ottoman architecture.

Being the first major building by Sinan, you can still see he is developing his design techniques – like the columns being heavy, for fear of structural integrity.

Unlike the typical austere decoration of most mosques, this one is highly decorated with very elaborate patterns. For example, the two minarets have elaborate geometric sculptures in low bas-relief and occasional terracotta inlays. 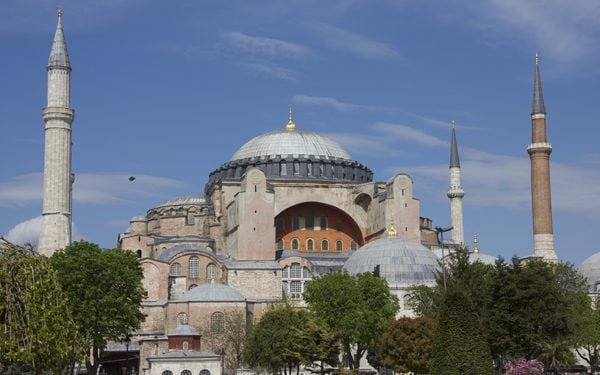 Hagia Sophia, famous in particular for its massive dome, is considered the epitome of Byzantine architecture and is said to have “changed the history of architecture.”

While it was built in 360 as the Greek Patriarchal cathedral of Constantinople, in 1453 it was converted into a mosque. That is until 1931 when it was secularized and turned into a museum.

It was the largest cathedral in the world for nearly a thousand years.

The current building (third one to occupy the site) was originally built as a church around 532 on the orders of Emperor Justinian. It was designed by the Greek scientists Isidore of Miletus, a physicist, and Anthemius of Tralles, a mathematician.

Of great artistic value is its decorated interior with beautiful mosaics and marble pillars. At one point the temple itself was so richly and artistically decorated that Justinian proclaimed, “Solomon, I have outdone thee!”

Being the first mosque built after the conquest of Istanbul, the great Mosque of Eyüp lies outside the city walls in Eyüp district.

It is located near the Golden Horn, at the supposed place where Eyüp, the standard-bearer of the Prophet Muhammed, died in the Islamic assault on Constantinople in 670.

Abu Ayyub al-Ansari, who hosted the Prophet Muhammad in his house when he moved from Mecca to Medina, is supposed to be entombed in it.

Even though today this mosque has gained significant importance and is considered as a place of pilgrimage for Muslims, it does not serve as a real pilgrimage place in Islam.

What other mosques would you suggest?

Lastly, if you’re looking to visit all these mosques among other important sights in Istanbul, I recommend checking Viator as they often have deals on tours in the city.

Also, before booking a hotel, I recommend checking the reviews and deals for the best-ranked hotels in Istanbul on TripAdvisor.