After hiking Kilimanjaro, I had a day or two to spare in Moshi.  I really wanted to go to a Maasai Village, but I was not in the mood of paying a ridiculous price to see a theatrical act.  Yes, that’s what the Maasai Villages have come to be… a money grabbing theatrical act.  That is, unless you visit the not-so-popular/farther villages that still conserve some of the old traditions.

Oh well, no Maasai for me…

That is until Matt – who hiked Kilimanjaro with me – told me about an “unofficial tour” to a nearby “oasis” where you can swim and swing on ropes.  He found out about this through someone who knows someone who goes there… that simple!

Dave, Hugh, and I jumped on the idea, and along with Matt (and the “unofficial guide”) off we went to have some post-kili fun.

This oasis – well, it is actually a natural pool in a somewhat dry area, fed by the river that runs nearby – is located in Kiluletua Village, about 1 hour away from Moshi. 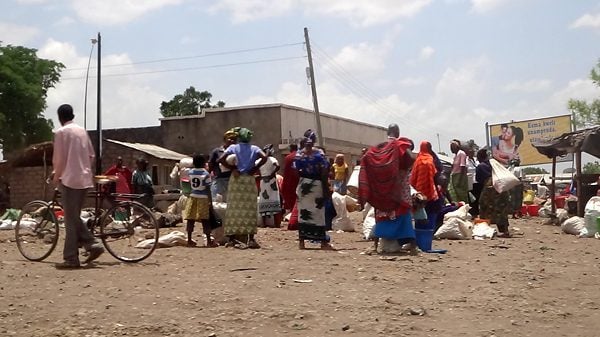 On the way there, we traveled through some really bad dirt roads that passed through some Maasai Villages and markets, as well as a few Pare Villages.  These villages are outside the tourist trail, so they seem to be as authentic as they can be.  While we didn’t stop at them, we could see from our car all the interactions in the Maasai market, the villagers (dressed in their traditional clothing) carrying their crops and herding their cattle, and walking to and fro around the village.  It was so interesting to see – and foreign!

We got to the “oasis” and our eyes confirmed that this is really not a touristic place.  Aside from a few teenagers swimming in the water and a few Maasai kids as spectators, there was no one around. 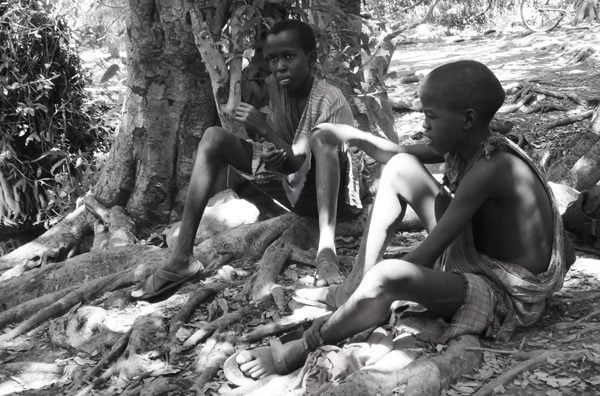 You might have heard that the Maasai are afraid of the water.  And that is true, for the most part.  Maasais consider fishes to be some type of underwater serpent, and they “prefer to be eaten by a lion than to die in the water”.   But these days, some of the Maasai kids and teenagers have challenged that believe and learned to swim.  A few of those were the ones at the oasis.

So after all, I am spending some time with the Maasai!

Without much convincing we jumped into the water – making our introduction with the swing rope, of course!   It was a bit cold, but oh so good!

If swing ropes are not enough, there’s also the option of jumping from a tree branch, which hangs about 25’ over the water.  And of course, we couldn’t miss that either!

After about an hour of swimming and mingling with the Maasai (and getting photobombed by them!), we walked to see a nearby waterfall.  On the way there, we saw lots of baboons, blue back monkeys, a few eagles, giant termite nests, and a few other animals.  We were told that if lucky, we could see crocodiles too.

We passed through a Maasai village that looked a bit abandoned.  Well, most of the villagers were at the market or doing their business, so just a few stayed behind taking care of the kids or doing other stuff.  A few kids looked at us with curiosity and said “Jambo” (hello) from a safe distance.  Some women looked at us from the doorway of their mud brick houses or simply didn’t mind us and kept to their business. 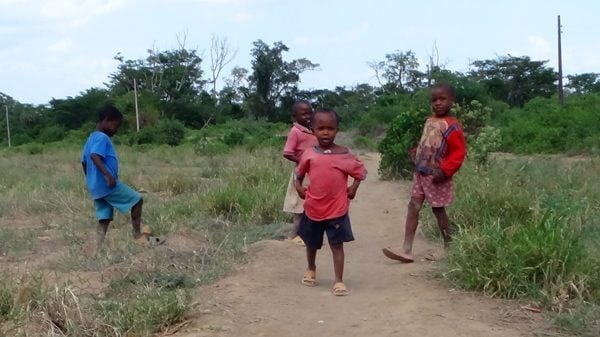 I liked this experience there.  It was like if we were mostly invisible and we saw them as they are as we passed – though, honestly there wasn’t that much to see.

The waterfall was pretty nice, though not that impressive (well, that’s my opinion after seeing Murchison Falls in Uganda).  But anyways, the hike was pretty nice.

This trip was one cool Maasai experience, and I’m sure the interaction with them at the oasis was more authentic than the “typical village trip” interaction.

Now, it’s time to take the bus and ferry to Zanzibar!