It’s interesting how a country that is 100 miles by 35 miles can hold so many secrets of its natural wonders, waiting to be discovered at any time.

At least for me, this was the case of Cueva Ventana. I lived in Puerto Rico for 24 years and never heard of this cave, yet in the past few years many of my friends have been talking about it like the new “it” place to do “turismo interno”, or local tourism in Puerto Rico. 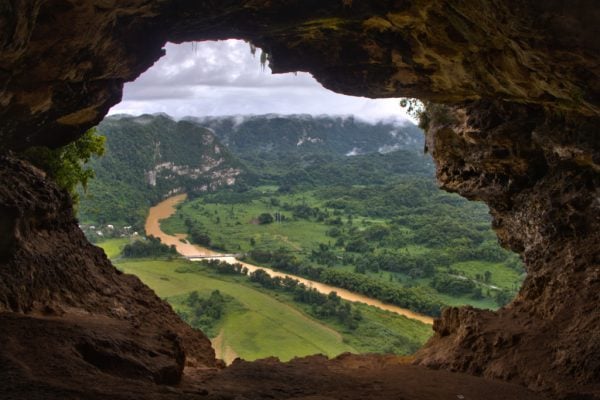 So, in my recent visit to Puerto Rico, I made sure I visited this cave that mysteriously popped out of nowhere. Besides, I love caves!

Cueva Ventana, which in English means Window Cave, got its name from its most particular feature; the “window” with the view at the end of the cave.

The cave is not that big or deep, and the physical demand to explore it is average (anyone fit enough to hike about 10 minutes and climb down some muddy, natural steps will be more than fine). 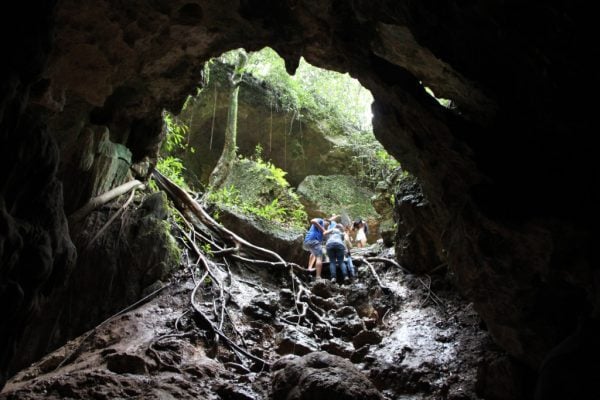 With flashlight in hand (very important to have flashlights as it is pitch black in there), my friends and I made our way inside the hole in the ground that marked the entrance of the cave and started exploring the cave on our own.

One of the cool things about Cueva Ventana is that (at least to this date) you can visit it on your own without the need for a guide or the need to pay a fee.  You come in, you explore, and you enjoy on your own.

Once inside, there were a few interesting chambers, lots of stalactites and stalagmites, a few slightly tight spaces, and lots of bats!  Yes, bats! In case you’re afraid of them.

After about 10 minutes of slow walking in the darkness, I caught a glimpse of a ray of light coming out from a tight passage made out of rock formations. As I walked closer the light shone brighter and brighter. I could now see the opening in the end. 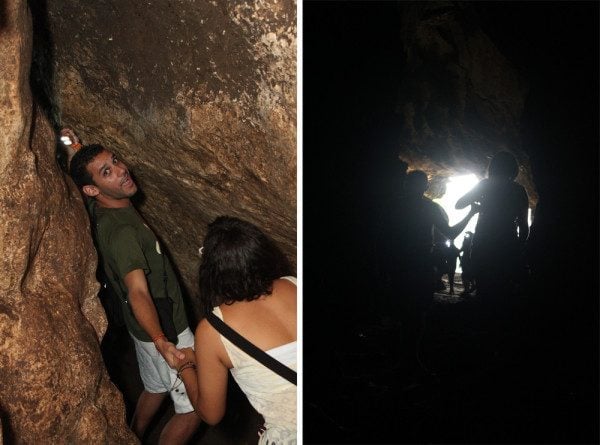 As I entered the last chamber, all I could notice was the huge contrast between light and darkness. It wasn’t until I got close to the opening that I could actually see the beauty of the landscape in front of me. There were the mountains, the river, the sky, and the farmlands… nature.

It was a cloudy day with scattered showers, so the ambiance at the edge of the cave changed as the clouds came and passed by. But, one of the most beautiful things I saw there was the rainbow formed after a strong shower.

After admiring and having fun at the edge of the cave (literally the edge as there’s a precipice beyond the opening) all my friends and I had to do was head back through the same way we came in.

How to get there:

Visiting Cueva Ventana is pretty easy. From San Juan, you just need to take the PR-22 road to Arecibo and take exit 75B. Drive for about 8 to 10 miles until you see a Texaco gas station to your left. Park on the Texaco, or next to it, where you’ll see a sign that says “Cueva Ventana”. Walk up the trail next to the sign for about 10 minutes until you reach the opening of the cave.