Oslo has no shortage of important and historically significant buildings.  It doesn’t come as a surprise that as I walked through the streets of Oslo I found myself learning about the history of the city from various points of view; including art, architecture, nature, and more.

While all of them were interesting, one tangent that caught my attention was the city hall building evolution.

Oslo has had an interesting development of its city hall “culture”, and this is what I got from it.

During the Middle Ages, various halls in Oslo called themselves the town hall or city hall at one point or another.  But it wasn’t until the fire of 1624 that King Christian IV commissioned the first “official” city hall.

This first city hall was built in the old marketplace in Christiania in 1641.  This area was very popular and bohemian at the time, with lots of artist and important people living and socializing in the area. 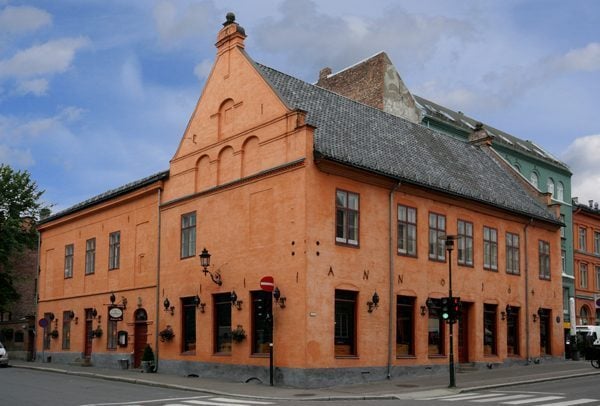 Since there was no major hall at the time, as soon as the city hall was built, it was not only used as the official office space for the city officials, but also as a gathering space for the bourgeoisie, for theatrical performances, and parties.  And, after the great fire in 1686, it was also used as a place of worship.

This structure is pure traditional Nordic architecture of the time and it is one of the oldest important buildings in Oslo. Today, it houses the Oslo Museum and the Det Gamle Rådhus (Old Town Hall) restaurant, one of Oslo’s oldest restaurants, where you can get plenty of traditional Norwegian dishes in a recreated atmosphere of the era.

After the first city hall building decayed (now restored), the city hall was moved to Rådhusgata 7, which to my surprise was right next to the Thon Hotel Panorama, where I stayed and highly recommend.

I walked up and down in front of this terracotta-colored building and I never figured it was a city hall, once.  While it does have the size and “feel” of an institutional building, to me this structure looks like the antithesis of a city hall since it is so enclosed (unless that courtyard wall is not original). 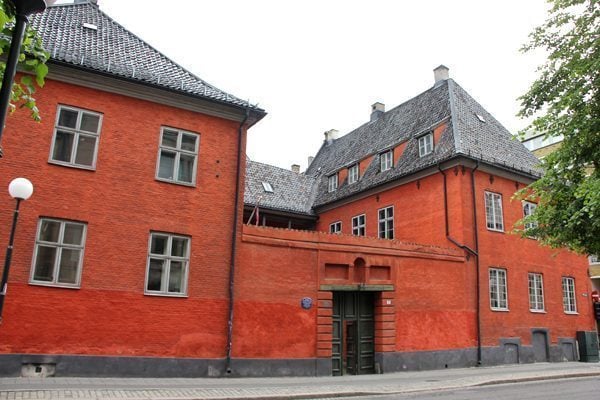 One of the reasons for this might be that the building was not created with the purpose of being a city hall – it already existed, with its oldest parts being from 1625 to 1630.  And, the scenery around was completely different from what you see today.

Back then, this city hall was facing the harbor (today a few streets away) and was surrounded by farmlands. Moving the city hall here was a good technique to foment the city’s expansion. This was the anchor that prompted growth and development in the area.  For many years it served as a city hall, but since 1802 it has housed the Military Academy.

And last but not least, there’s the imposing, two towered, current city hall.  The interesting history behind its design spans for 30 years of Oslo’s history, when architectural fashions were changing.

The design started with national romantic notions of the late 1910s (it didn’t include the towers we see today) and later got influenced by modernist ideas that were spreading all around the world in the 1930s.

Its elaborate carvings show the talent of Norway’s finest artists and tell vividly the folk stories that form part of Norway’s culture, especially in literature, as well as other historical scenes. 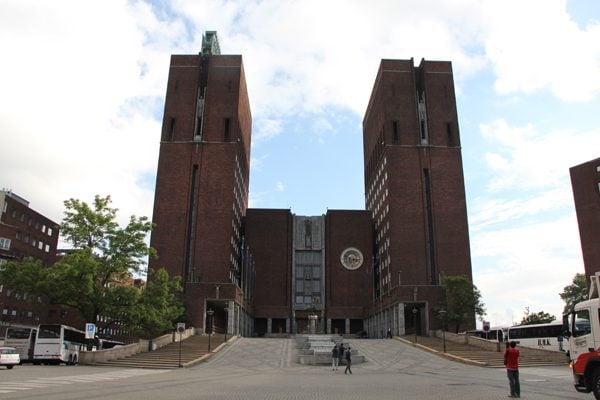 I think you might be asking, “wait, what happened during the many decades between the last usage of the second city hall and the construction of the third?” It’s a century between them!  Well, to be honest, it is a mystery to me too.

I asked my knowledgeable guide, but I didn’t quite catch the answer clearly, so I will have to do more research on that and post an update.

Besides that little historical black hole between buildings, what’s also interesting is that this city hall was built in a slum (back then) known as Vika.  Quite a place to build such an iconic and important government building, right?  But, like with the previous city hall, the construction of this building was used to promote the expansion of the city (and to clean the slummy filth).

Construction of the city hall designed by Arnstein Arneberg and Magnus Poulsson started in 1931 but was later paused by the outbreak of World War II.  It was finally inaugurated in 1950; the same year the city celebrated its 900 anniversary.

Its strong characteristic architecture of the 1930s and multiple artworks make it one of the most famous buildings in Oslo.  But that’s not all…  Which important event is celebrated annually in this city hall?  The Nobel Prize!

Oslo, and Norway in general are magnificently proud of this yearly event.

Every December 10, the Nobel Peace Prize ceremony is held here, to award those who have “done the most or the best work for fraternity between nations, for the abolition or reduction of standing armies and for the holding and promotion of peace congresses.”  Among the recent recipients of the prize?  United States President Barack Obama!

In recent years, this city hall was named Oslo’s “Structure of the Century”.  While it really doesn’t fancy me enough to make me back that statement, I do have to admit that the folkloric scenes and art-deco inspired industrial scenes on the base of the building make an excellent storytelling of what Oslo used to be, its beliefs, and what it is today (or back in the 1950s).

As you can see, Oslo’s city halls have been involved in the city’s development, not just from the political perspective, but also from the social, historical, and artistic point of view too.  It’s interesting to see how an institution can have so much influence over a city’s history.

If only all city halls were this interesting…

I want to thank Visit Norway for showing me around Oslo and giving me such an ample historical perspective of the city.

2 thoughts on “Oslo, Norway: A Tale of Three City Halls”