How A Day In Trondheim Can Blow Your Mind

I will start by saying that Trondheim was nowhere in my original “travel plans” (If I can say I have those), but that once I got there, I was more than happy it made its way into them.

The reason why I was traveling to central Norway was to go to Hell.  Yes, Hell.  But I’ll tell you more about my experience in Hell in the next post.

So, in order to go to Hell, it is highly recommended to stop in Trondheim, since it is so close.  And of course, after almost 7 hours on a train from Oslo, you’re grateful you have a nice place like Trondheim to rest. 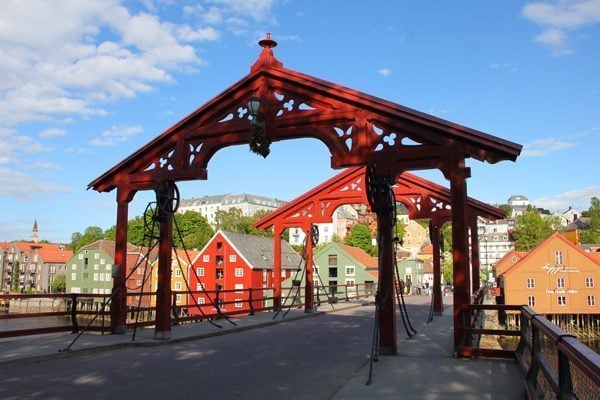 But, that journey from Oslo to Trondheim is nowhere close to dull.  To be honest, it was one of the most spectacular train rides I took in all Europe with my Eurail Pass.  The train runs through some of the most stunning Norwegian sceneries of the Dovrefjell: gorgeous lakes, snow capped mountains (even in summer), folkloric towns, beautiful rivers and waterfalls, and pure serenity.

This video shows better how impressive the journey it…

Now, back to Trondheim… This city is waaaaay beyond nice.  Trondheim can blow your mind.  But it doesn’t do it with lots of whistles and blows (no pun intended); it does in the subtlest way you can imagine.  In fact, you need to do a bit of exploration in order to discover a few of these sights.

The center of Trondheim is small, so there’s no need to plan anything since everything is so close and accessible.  In fact, the best way to experience Trondheim is to relax and take things as they come and show out of nowhere.

More than once I said to myself as I walked: “ahh, this looks interesting, let me go there instead to see what it’s all about.”

Speaking of walking, not only the city center is highly walkable, but also there are several well-developed walking trails all around; following the coast, up the mountains, and along the fjord.   Good choices are Ladestien and Nidelvstien trails.

One thing that fascinated me is how a small city can hold so much history and so much “unadvertised” importance.

Did you know that Trondheim is the historic Viking capital of Norway?  Yes, it was founded in 997 as a trading post and it was the capital during the Viking age until 1217.

Being such an important place to be, back then, it made sense to build a majestic cathedral for the Kings and their people.  Here came Nidaros Cathedral.  Nidaros is very easy to find.  Just look around and it will be the biggest cathedral you’ll see in the city center.

Built in 1070, it is the most important Gothic monument in Norway and it was Northern Europe’s most important Christian pilgrimage site during the Middle Ages.

Fun fact: It is the northernmost medieval cathedral in the world and the second largest in Scandinavia.

Yes, it is big, and it is important!

During the Middle Ages, and later after the independence of Norway, this cathedral was used to coronate the Norwegian Kings.  Now a day, instead of coronations, what they do are consecrations.

Just stand in front of the façade of the cathedral and you’ll see what I mean when I say, “this cathedral is beyond impressive with its elaborate façade design and size”.

At the opposite edge of the main road that culminates at the cathedral, there’s Munkholmen, or The Monk’s Islet.  A fort, monastery, special prison, World War II anti-aircraft gun station, and execution ground in ancient times, it is now a popular recreation area, beach, and restaurant.

I didn’t bathe in the fjord’s water since it is too cold for my taste (blame the Caribbean waters I was raised with!), but just a visit to the island was more than worth it.  Note: Shuttle boat from the harbor run from the end of May until early September.

Now, I want to take you to Bakklandet, or the old city.  This section of the city is situated on the east bank of the Nedelva River.  Just cross the Gamle Bybro bridge and you’re there.  Right as I was crossing the small, old bridge, I looked to my left, and the view I had is what you’re seeing in the picture below.

These are old wooden buildings originally built to house the working class.   As in many European and American cities, what were once working class areas have now transformed into trendy spots.

Many cafes, shops, and restaurants populate these colorful buildings today, so don’t be surprised if you feel tempted to sit down at a café to sip a drink and enjoy the scenery in a peaceful environment.

And last but not least, there’s the Kristiansten Fortress.  If you continue the same path taken to Bakklandet, just go straight uphill (quite an uphill! And that’s why Trondheim proudly hosts the world’s first bicycle lift!) until you reach the fortress.

The fort was built after the great city fire in 1681, and now stands guard over the city.  Like with the rest of Trondheim, this fortress holds a lot of history itself.

It saved the city from conquest by Sweden in 1718 and under German occupation from 1940 to 1945; the fort was used as a place of execution for Norwegian members of the resistance.

While the history is really interesting, the reason I’m taking you to the fortress is to get inspired by the spectacular view of Trondheim, the surroundings, the fjords, and the mountains!  Unless you go hiking on the trails mentioned above, this is the best view you’ll get of all Trondheim.

And what’s the best way to experience the fortress?  Hike up with your bag of groceries and picnic in the fortress grounds while watching the scenery and the sunset (beware that Trondheim is on such a high latitude that during the summer you will not see the sunset… it’s eternal sunlight!).

Now I wish I had stayed longer there since Trondheim does deserve some quality time.

Have you been to Trondheim?  How did it amaze you?  What else did you see?