I raved how New Zealand tapped on Mother Nature’s hippy and psychedelic side on my previous post, and if you read it, you know by now how crazy beauty can be in this country.

Now, New Zealand’s nature doesn’t just stop there; it knows how to go sci-fi crazy too with glowing worms! Just 2.5 hours away from Auckland is Waitomo, a very small village made famous by the Waitomo Glowworm Caves. 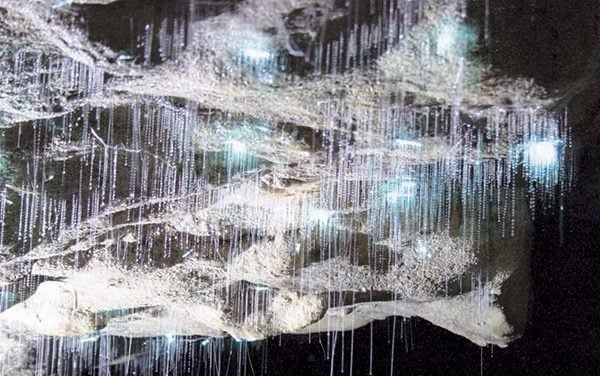 These glow worms, scientifically known as Arachnocampa Luminosa, are unique to New Zealand (though a similar kind is found in Australia).

Thousands of these tiny creatures hang from the cave’s ceiling, radiating their unmistakable luminescent light to attract their prey.

They might look beautiful, but they are indeed deadly when luminous; well, deadly to flies and insects at least.

Their luminosity is their sign of hunger, and they will shine as bright as possible to trick flies into thinking their light is the exit from the cave, but instead, they get trapped in the worm’s sticky and acid hanging strand.

There are several glowworm caves in Waitomo, but I went to the original one, simply called Waitomo Glowworm Caves. This one cave was first explored in 1887 by the English surveyor Fred Mace and the local Maori Chief Tane Tinorau.

My experience wasn’t as exotic as the one the original explorers had, but I still witnessed the full-blown beauty of the glowworms; something that I can’t still comprehend to this day.

I descended underground with the help of a local Maori guide, to explore the over 250 meters of stunning underground scenery. Along the way, she explained the history of the caves, the science behind the glowworms, and the Maori history associated with it.

Most of the time the glowworms were too far to be distinguished as a worm, but there were moments in which I could get close enough to them to notice them individually, almost like thousands of independent vertically-hanging spiders web waiting for their catch. 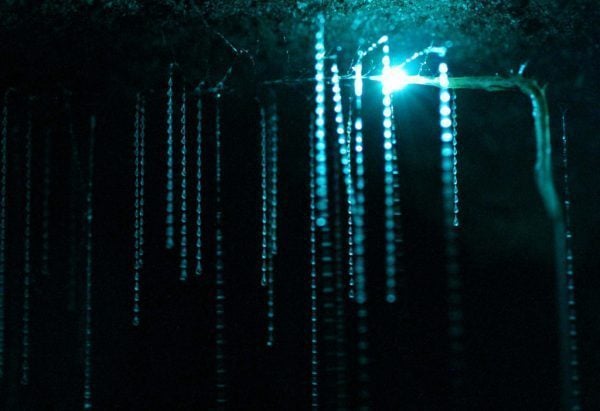 Among the chambers visited, there’s one called the Cathedral. Interestingly enough, the acoustics in this particular cavern are opera worthy.

Actually, there have been a select number of opera and symphony performances here, as well as eight Maori weddings, to date.

Our guide sang a traditional Maori song, which sounded beautiful in the chamber. Naturally, I did not understand a single word, but her enunciation and intonation delivered the feeling of the story behind the song. It was peaceful and joyful. After her short song, we continued down towards the Glowworm Grotto.

Along the way, we saw a few glowworms here and there, and each time we saw them in bigger numbers and concentrations. But, it wasn’t until we reached the Glowworm Grotto that I was literally left speechless. 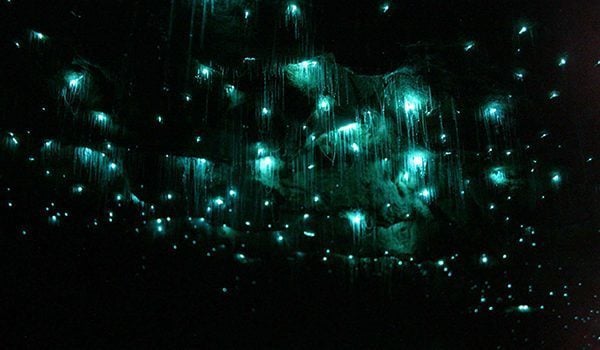 In order to enter the Grotto, we had to hop on a raft to go deep into the darkness of the chamber. First I could see nothing but darkness, but as the raft went deeper and deeper, the glowworm display suddenly exploded in ways never seen before in the cave.

There were thousands upon thousands of worms creating a celestial ceiling. Some glowed bright baby blue, while other shined slightly dimmer. Some worms, which are in their growing stage, are still yet to glow. 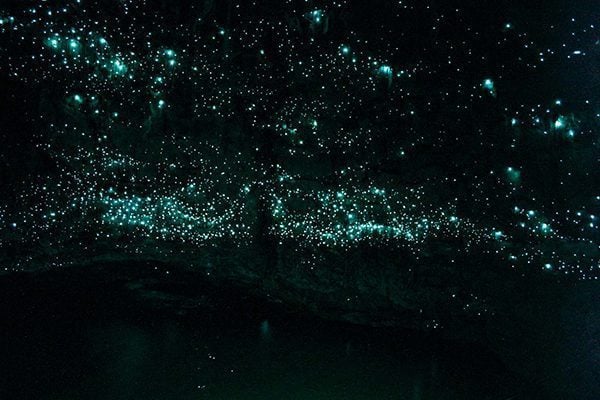 I marveled at Mother Nature’s light display as the boat glided silently through the underground Waitomo River. I couldn’t stop looking at the thousands upon thousands of little lights that sprinkled the entire ceiling, looking like a surreal starry wonderland in a deep space galaxy.

It felt like a lucid dream, but I couldn’t have been more awake. This is a moment I’ll never forget. I was in true amazement by how crazy and creative nature can be. 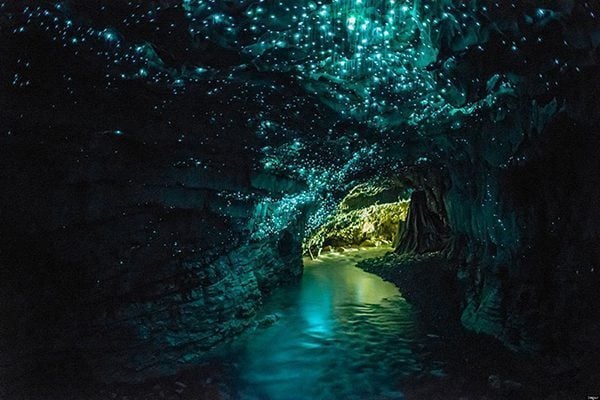 In fact, New Zealand, in general, is a place I’ll never forget. Like I said in my previous post, this country knows no boundaries for its natural beauty.

And, I’m not just happy about that, but also by the fact that this proved yet again to me that no matter for how long you’ve traveled and how much you’ve seen, nature has always a way to surprise and amaze you beyond your expectations.

Some of the images were provided by Spellbound Waitomo.  Last image from psu.edu.

5 thoughts on “Waitomo: Where a Starry Sky Can Be Seen Underground”