Rotorua: The Psychedelic Side Of Mother Nature

I remember when I was a kid and I painted pictures with all the wrong colors and things that don’t normally belong. I was quite applied, but I was also creative.

To my teachers, maybe I was crazy. They would sometimes tell me the water is supposed to be blue, the grass is green, and the sun is yellow. Fine, those are the standards.

Now, after visiting Rotorua in New Zealand, I began to think that maybe those crazy colored drawings weren’t crazy at all.

Close to the city, there’s the Waimangu Volcanic Valley, the Wai-o-Tapu Geothermal Wonderland, and Te Puia.

These are places where Mother Nature expressed its hippy dreams with no inhibitions and colored everything with a palette of psychedelic hues.

These crazy expressions are the result of 400,000 years of volcanic action from Mount Tarawera, located in the Taupo Volcanic Zone, just 24 km from Rotorua.

To have an idea of its power, it is known that this volcano is responsible for one of New Zealand’s largest historic eruptions.

The volcanic activity has changed the landscape considerably; destroying wonderful sights, but creating new landmarks – like the Tikitapu and Rotokakahi lakes, also known as Blue Lake and Green Lake, respectively, due to the color and contrast of their waters.

And of course, there’s Rotorua itself, which is famous for its geothermal activity, geysers (like the Pohutu Geyser at Whakarewarewa, the largest active geyser in the southern hemisphere), hot mud pools, plumes of smoke and steam throughout the city streets and backyards, and the ever-present floating smell of sulfur.

Yes, you get the “rotten egg” smell every now and then in the city. Somehow people here have learned to live with it and are “immune” to the geothermal activity that could easily freak out everyone else (including me).

But as fascinating and beautiful as these places are, I believe Wai-o-Tapu is where nature goes the craziest. Here, there’s the multi-hued lake known as the Artist’s Palette.

To me, it was crazy seeing how the water changed from orange to yellow, to green, to grey, and blue depending on the minerals, the wind, and the thermal activity happening at each point of the lake.

But, if this wasn’t beautiful enough, right there at the Artist’s Palette there’s the Champagne Pool. In my opinion, this is the most beautiful hot spring I’ve ever seen.

A 700 years old crater formed by a hydrothermal eruption gives shape to the Champagne Pool, but the most beautiful part is the orange sinter terrace made out of arsenic and antimony sulfur compounds. It is just a surreal landscape.

While the Champagne Pool might be the most beautiful, in my opinion, it is not the only crazy expression of Mother Nature in the park. There are over two-dozen craters and hot springs along the park, all active and all unique.

Some craters are colored yellow due to the sulfur that comes out of it; one hot spring is made out of boiling mud, and the craziest of them all is the Devil’s Bath.

This thermal bath is colored shocking neon green! Seriously, it is the most unnatural color you’ll ever see; yet it is completely natural. 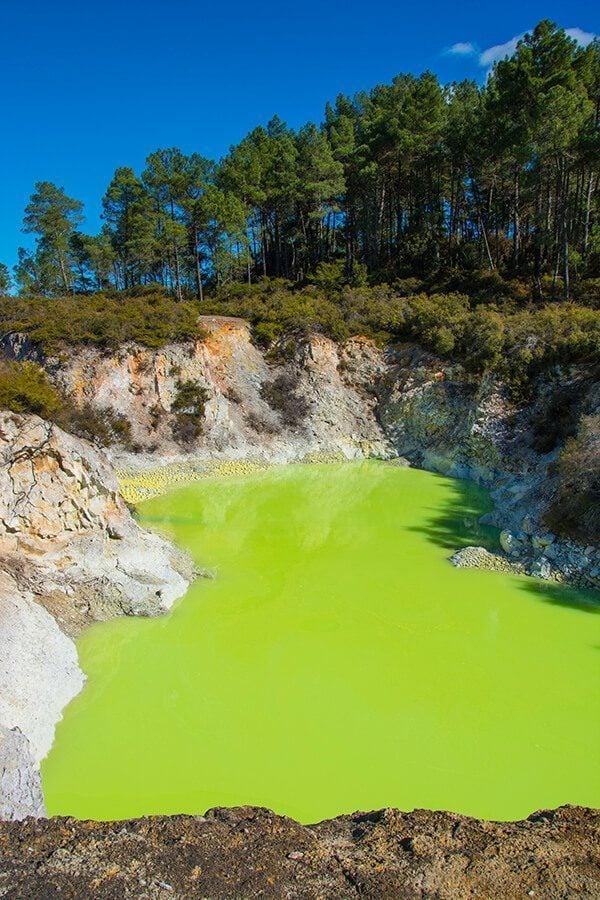 Wai-o-Tapu also has the peculiar Lady Knox Geyser, which apparently is the most punctual geothermal event you’ll find around Rotorua, spurting jets of water up to 20m high at 10:15 am every day.

Sounds pretty impressive, right? Well, as impressive as it is to see it, the truth is that the geyser is injected with soapy surfactant every day at 10:15 am to break the surface tension of the cold water in its upper chamber, allowing it to mix with the hot water in the lower chamber and explode.

Actually, this is how a gang of prisoners discovered the geyser in the early 1900s. They were washing their clothes and the geyser exploded after the men had unwittingly poured soap into the geyser’s spout. 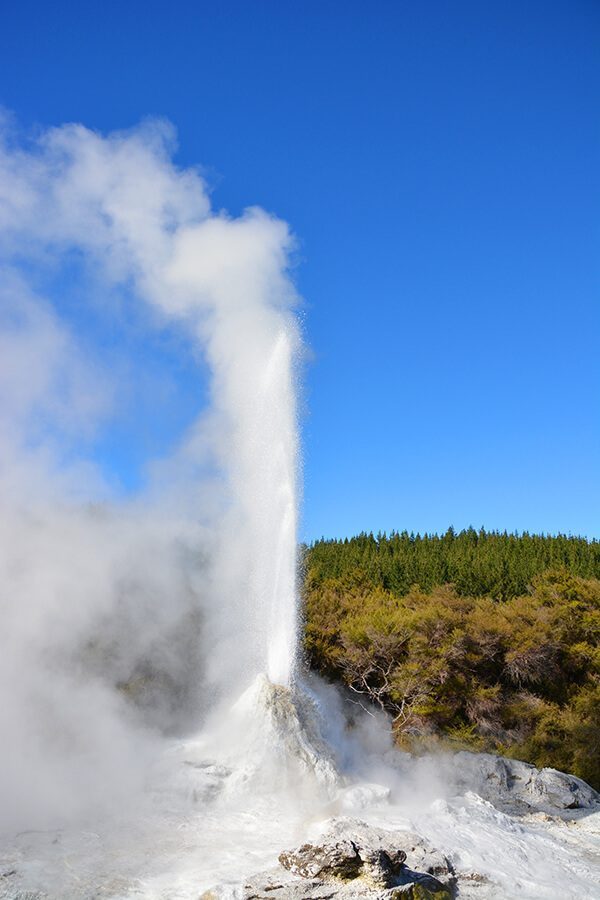 These hot springs I described before are not open for bathing. They are simply too hot or they are cordoned off for preservation, but all around Rotorua, there are dozens of thermal waterfalls and hot springs that are suitable for bathing and are quite relaxing, among them Kerosene Creek, which is free to enter and 100% natural.

I also highly recommend hiking one of the many trails in the Rotorua Redwoods, which are free and beautiful.

The Pohaturoa Trail (7.5km long) has views over Rotorua and Whakarewarewa (Te Puia and Pohutu Geyser – which explode naturally about every hour, unlike Lady Knox Geyser); and the Whakarewarewa Circuit (34km – for serious hikers), which takes you past the Blue and Green Lakes as well as many other beautiful and somewhat surreal scenery; among other tracks in the area.

Additionally, Rotorua also has outdoor adventure activities for those looking for a dose of adrenaline.

Experts say that the next big volcanic event in New Zealand is overdue and that the buildup of another eruption in the Taupo Volcanic Zone is already on an unstoppable course.

I can only imagine what the future of this place could look like if the next eruption shifts and changes the landscape as radically and colorful as it has done in the past.

Well, kids should prepare their crayons, because I’m sure they’ll get to use a lot of creative colors to represent this place!

Make sure you arrive before 10:15 am to purchase your ticket and head to Lazy Knox Geyser to see it explode.

In order to see the Pohutu Geyser, you need to visit the New Zealand Maori Arts and Craft Institute (Te Puia). The entry fee is $48.50 per adult and $24.50 per child.

Always stick to the paths in all parks, as they contain high geothermal activity, which could be dangerous.

1 thought on “Rotorua: The Psychedelic Side Of Mother Nature”