If you’ve followed my blog for a while, you’ll know that I’m an adrenaline junky, so I pretty much felt like at home there.

My mission there was to make sure I got my adrenaline fix, and you bet I did!

Before arriving Queenstown I was recommended to try the Shotover Jet. This is basically a jet boat ride along the Shotover River canyon. Well, it is not just that…

The canyon is quite narrow and not only that; they drive the jet boats at up to 85km per hour next to sharp-rock towering walls and with merely a few inches of water under the boat at certain points of the river.

That sounds pretty exciting to me! I’m in!

Shotover Jet is located in the center of Queenstown, but from there you take a complimentary bus to their location in the Shotover River – from where the jet boat departs.

It was winter, so they warned me to dress warmly as the canyon would be cold. I was a bit worried since I didn’t have proper winter clothing – just a few light layers were keeping me warm (barely).  But, that was not a problem.

When we got ready to hop on the jet boat, we received a waterproof and windproof coat.

Does this mean I’m getting wet in this cold weather?!

I hate cold water more than a cat hates to get wet.  Sigh… 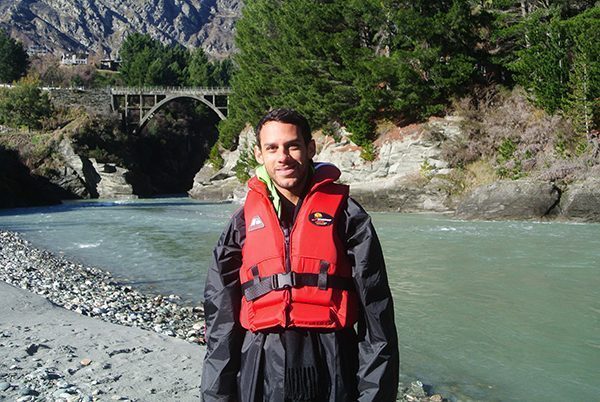 A friend told me not to sit on the back if I wanted to stay dry.  What he failed to mention is that you get wet pretty much everywhere on the boat – just slightly less on the front than on the back.  You’re warned already.

Our ride started with a photo and a quick test drive in the open to get used to the jet moves.

From there our driver sped into the canyon with just a thin layer of water between the riverbed and us. I was amazed by how this boat could almost literally fly over water and not hit the bottom. 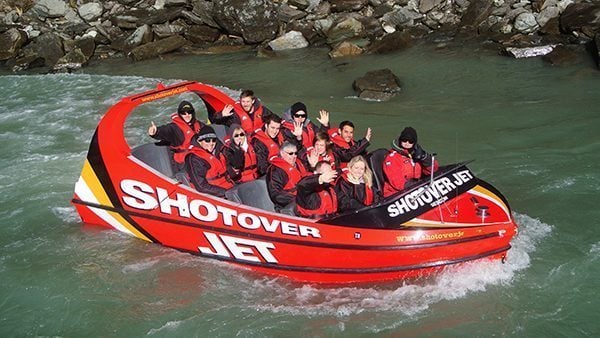 Then came the towering walls with their jagged-edged rocks popping out from both sides of the canyon and protruding from within the flowing river.

I have to give mad props to our driver who drove past all those corners and popping rocks with surgeon-precision at 85km per hour. A missed turn and we could all have ended like mashed potatoes.

Oh, and of course, driving that fast along whitewater rapids meant we were getting splashed every now and then, but those splashes were nothing compared to the 360˚ stunt splashes.

I think we did five or six 360˚ along the 25 minutes ride.  We all knew we were up for the stunt every time our driver did a mild “rodeo sign” by rotating his index finger in the air.

And then it came… everything twirled, the rocks blurred, the water splashed straight on everyone’s faces.

The air was cold enough already at near-freezing temperatures. Add the wind-chill and the freezing river water on my face and I was ready to become a Popsicle. 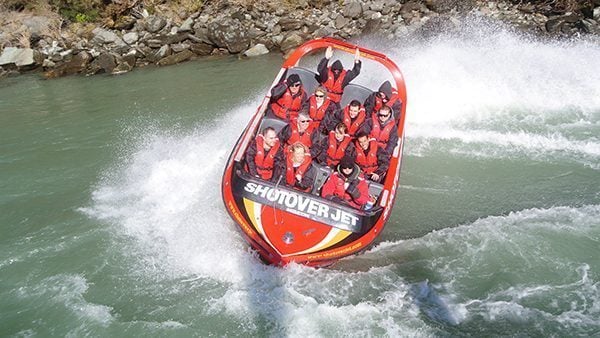 I admit at one point I secretly wanted the driver to stop for a second so I could regain the senses in my face since I felt like it was freezing over with a permanent thrill induced mix of a smile/frown.

Alright, alright, I’m being dramatic; but really, it was cold.

If you’re wondering, Shotover Jet is the only company that does the Shotover River Canyon.

This is to make sure no other boats are in the canyon, so there’s no potential danger of crashing against them at high speeds, on narrow spaces, or turns.

I really enjoyed the ride, even with my freezing hands and face; but if you go during summer, it’ll be much more refreshing.

Here you can see a peek at the experience on the video taken during my ride.

The Shotover Jet experience costs $129 NZD per adult and $69 NZD per child. They sell family passes and also do “Sunrise Jet.” Children must be at least 1 meter tall to ride.

If you love the experience and would like to ride again back-to-back, you can do so for $19 NZD and they will put you on the next available ride.

Pictures and videos are sold separately.

Even though the jet boats depart every 15 minutes, it is recommended to book ahead (online or by phone), especially during high season.

Thanks to Shotover Jet for the complimentary ride. They didn’t ask for a favorable review, and as always, the opinions and expressions written here are my own.