This will sound funny, but the biggest highlight of Mandalay is actually getting outside Mandalay.  Mandalay’s surroundings are full of small villages, ruins, ancient pagodas, monasteries, and a very interesting wooden bridge. 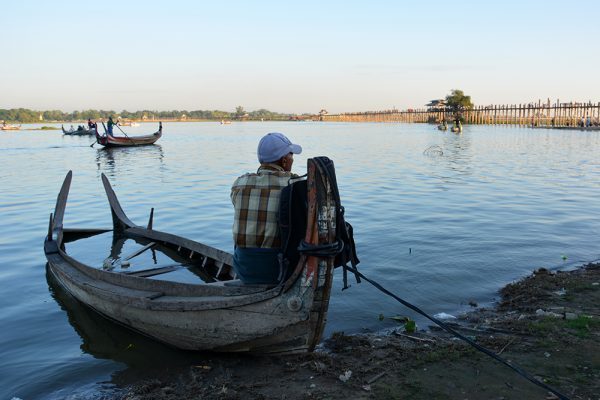 From Mandalay, I took a taxi 45 minutes away from the city until I reached Amarapura, another former capital of Burma.  Amarapura is home to the famous U Bein Teak Bridge.

This 1.2 kilometers (.75 miles) bridge crosses over Taungthaman Lake to connect both sides of the lake for regular pedestrian traffic.

It was built by mayor U Bein around 1860 by salvaging Teak planks and columns from the former royal palace, which was destroyed when the capital moved to Mandalay.  It is believed to be the oldest and longest teakwood bridge in the world.  Impressive, eh? 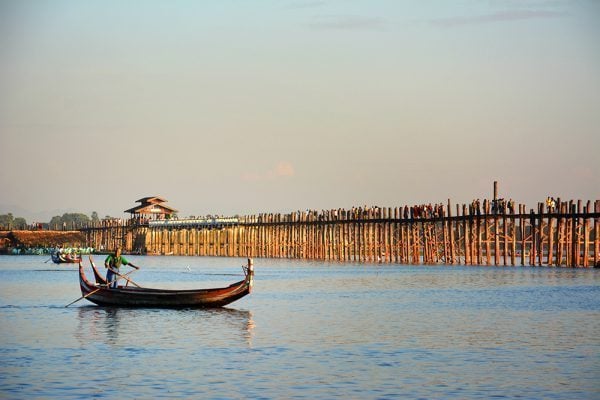 If that wasn’t impressive enough crossing the bridge is an experience on its own.  You see the over 1,000 decaying wooden pillars dubiously holding the worn teak planks that shake and creak as you walk through.

Even though the bridge remains largely intact, some of the wooden pillars have been replaced with concrete due to the danger their decay presented.  But don’t worry; the bridge is safe to walk!

The bridge’s beauty does not only lie in its structure and history, but also in its traditional use by the local community.  Hundreds of locals and saffron-robed monks walk or ride their bicycles along it, and fishermen go about their daily work in its shadow or fish quietly from the bridge’s vantage point with a single fishing rod and a lot of patience.

The best time to go to the bridge is at sunset when you see several monks making their way back to the monastery, a few fishermen rowing on the lake, and most of all, the orange glow of the sunset gradually engulfing the bridge and its surroundings.

The distinctive shadow and silhouette of the bridge against the sun make one of the most picturesque sunsets you can imagine.

Below I share a small set of pictures taken the afternoon I went there.  The people, the bridge, and the environment engulfed me with their enchanting spell of beautiful simplicity. 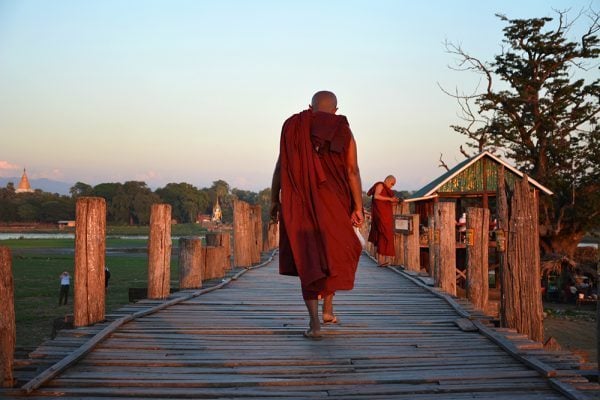 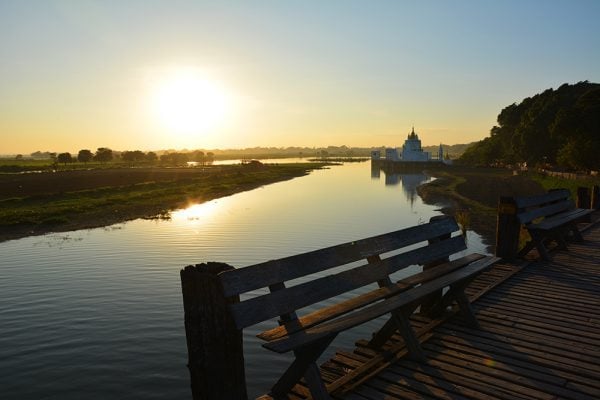 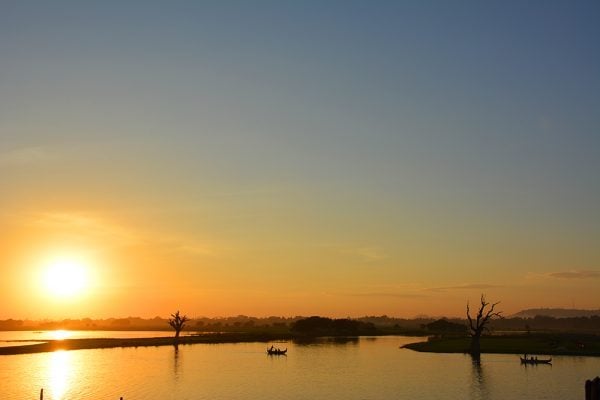 The bridge is particularly busy during July and August when the lake is at its highest point.

You can hire a boat to get a close-up view of the bridge from the water or simply walk the bridge and take the stairs down at the island located by the middle of the bridge (only during the dry months – like in December, when I visited).

You can get to U Bein Bridge by hiring a taxi (found anywhere on the city) for around 15,000 to 18,000 Kyats (close to $15 to $18) or rent a motorbike for slightly cheaper (13,000 to 15,000 Kyats).  The price you pay for the taxi should include already the entrance fee to the bridge.  Otherwise, you can take a guided tour, which I saw for about $12 to $15 per person, but you are limited on the time you go there.  I preferred to share a taxi with my friend and spend as long as we wanted there during sunset.

Apparently, the sunrise is also well worth watching and is much less crowded.

12 thoughts on “U Bein Teak Bridge in Amarapura, Myanmar”