Inle Lake is one of the most popular tourist spots of Myanmar (Burma), still, it is easily possible to get away from the crowds to find some solitude or to feel like you’re in a place that has not truly been discovered by the rest of the world. 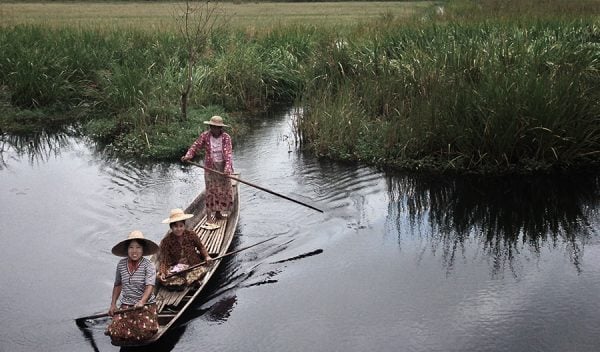 I spent a few days in Nyaungshwe, a small town that served as my first introduction to Burmese semi-rural life.  This dusty small town north of the lake acts like the center of gravity of everything surrounding the 116 square kilometers peaceful body of water.  Markets, hundreds of food stalls, and street vendors conglomerate here to sell the daily catch or their latest harvest.

Even though mountains surround it, there are moments in which the lake seems like it has no end; a perception only reinforced by its many interminable canals and reed-line marches that extend like zigzagging tentacles.

I had a great desire to go around the lake in one of the motorized local “longtail” boats to see the fishermen in action as well as the farmers at the floating village.

I have a fascination on seeing people’s daily life routines (as you will soon see in pictures) that seeing a man fish like he does every day, a woman do her laundry by the lake, a girl row a boat with her freshly collected produce ready to be sold, among others, inspired in me all sorts of wonder and curiosity on how simple yet rich their life looks upon a first impression.  There is beauty in the traditions and simplicity of their day-to-day tasks.

It’s funny that I got disappointed just a few minutes after I started my boat ride. When you think of Inle Lake, this is what you see in your mind: 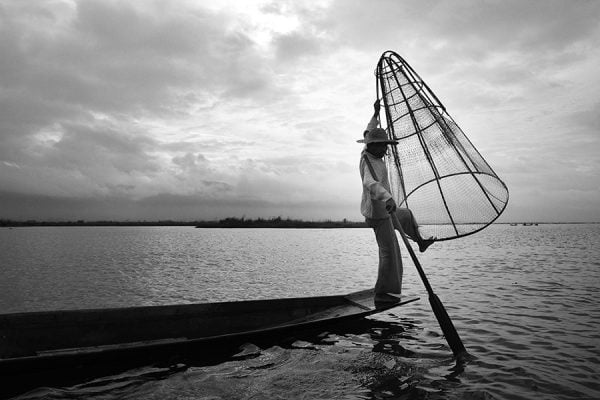 And that’s what I got, actually.  But the disappointing part was that these were “actors” stationed at the end of the tributary that goes from Nyaungshwe to the lake.  It was a tourist trap to get money out of your pictures taken.  Where are the real fishermen?

At first I thought I was fooled by my boat driver and that I would not see any real fishermen, but as we continued the journey, my disappointment turned into amusement and disbelief once we sped by dozens of real fishermen – who were actually fishing both near us and in the distance. 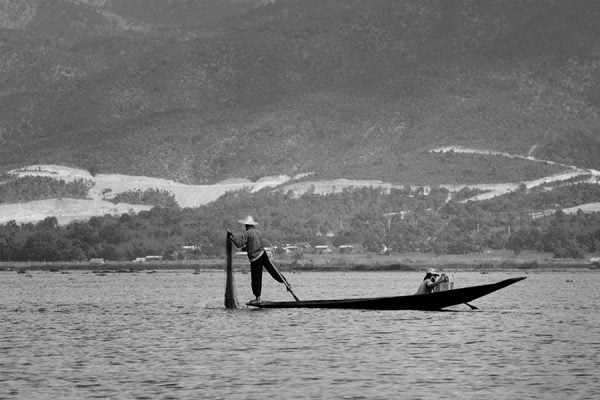 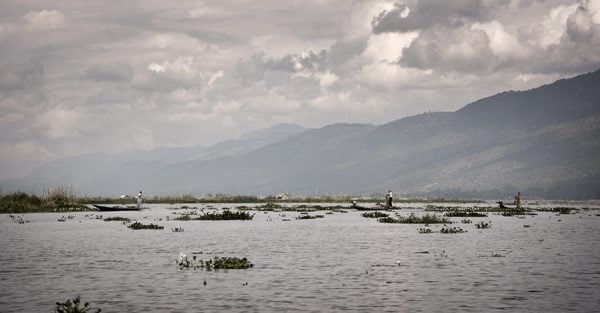 I was captivated by their acrobatic agility, which allows them to stand upright with one leg locked around a long oar and the other foot firmly gripping the flat stern of their boat as they scull along the lake and its channels.

This is an awkward-seeming way of paddling their boats, yet it is very effective due to the reeds and floating plants that cover the lake; making it difficult to see above them while sitting.  Standing allows the fishermen to see beyond the reeds, thus making it easier to fish, as well as having both hands free to cast the net.

I still look at these pictures today and I can’t help but smile.  I still have the memory of the beautiful scenes of the lake and the fishermen.  But, Inle Lake is much more than this.  There’s the floating village, which has more charm than most places I’ve visited.  Its houses sit on stilts lined into an organized yet semi chaotic maze, and people navigate and move between houses in small canoes etched out of logs.

Each house, as messy as it looks, is optimized to its maximum capacity.  Every room, every cord, every net, every log has a purpose.

Between the colorful laundry swinging in the breeze, the young men fishing in their own “backyard”, the floating flowers, and bamboo fences; I never got tired of the bigger picture since I was constantly fed with endless details that filled me evermore with wonder and made me crave for more.

There are several more wonderfully picturesque villages along the lake; all of them with the eye-catching bamboo and teak stilted houses lined along narrow canals.  It all seems and feels as if this place got stuck in time about 80 years ago.

Not only were the floating villages a stunning sight, but also the floating gardens somewhat adjacent to the village made a similar impression with a much simpler and cleaner visual language.

These gardens are huge expanses of tomato and cucumber fields, among others, growing on mounds of floating soil. Farmers row their canoes in the canals between the fields to plant, fertilize with seaweed, water, and harvest the crops.

It is astounding to see the farmers rowing in one direction while you move in the opposite, and the only frame of reference is the overgrown plants between both.  It looks as if they are drifting effortlessly in a motionless act.

On the boat trip there’s also the opportunity to visit the Ywama floating market.  Even though it is mostly focused towards tourists, with their endless stalls of souvenirs, it is possible to go past them to find the food section.

Beyond the typical souvenirs, some of the women showcased colorful piles of tomatoes, chilies, and mandarins, as well as dried fish, tofu, and other popular Burmese snacks.

A similar, yet smaller, market setting could be seen in several other sights and pagodas. Women with thanaka smeared faces sat along the long hallway to Shwe Inn Dain Paya and its 1,054 pagodas.

Many of the pagodas have been reconstructed and some have even been covered in shimmering gold. Yet, a high number of pagodas have been left to crumble in time and at the mercy of nature’s power, which already claimed possession of some of them with a blanket of vines.

It is a beautiful and powerful experience to be there, surrounded by so many untouched and strongly meaningful pagodas, and to suddenly see one of the most interesting persons pass by, minding her own business, as usual.

I was astonished by her seemingly exotic look with her hair encased in a pink head wrap matching her outfit and framing her wrinkled face, a weaved basket on her back, a machete on her hands, and a tobacco in her mouth. 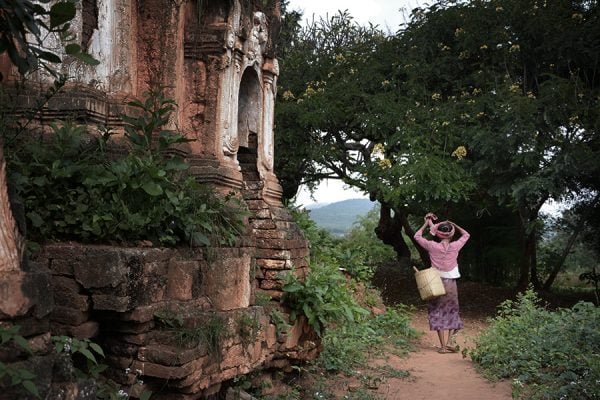 As real as this all was, it felt unreal to me.  I didn’t expect to see such an interesting looking person in such a derelict place.  I couldn’t contain my amazement, so I politely asked her for a picture.  She happily agreed. 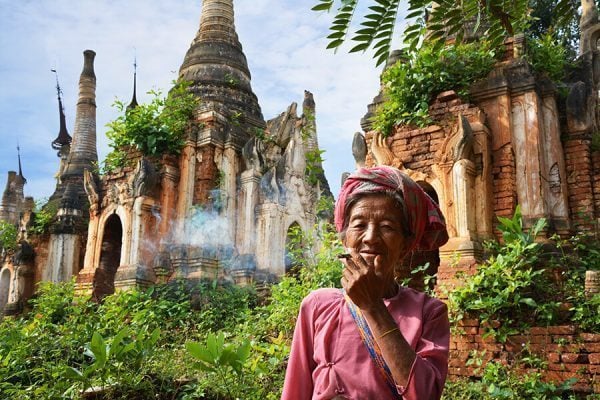 But back to Shwe Inn Dain Paya.  It is said that it originated with a small stupa donated by King Siri Dhamma Swaka in the second century before Christ, but that most of the stupas we see today date as far back as the 11th century.  The rest is mostly a mystery.

There’s also the interesting, yet bizarre, Nga Phe Kyaung Monastery.  A beautiful old teak building surrounded by water and floating gardens that is also known as the Jumping Cat Monastery. Its monks have trained the numerous resident cats to leap through a small hoop.  Crazy, eh? Well, whatever fancies them…

The journey back to Nyaungshwe was just as interesting as everything I had seen previously throughout the day, with more fishermen paddling with their feet, several boats overflowing with produce goods, farmers on their canoes tending to their floating vegetable patches, and men collecting piles of seaweed for fertilizing.

It was like a fast-forwarded condensed version of their day, which in essence, is a slow-paced and tranquil life. 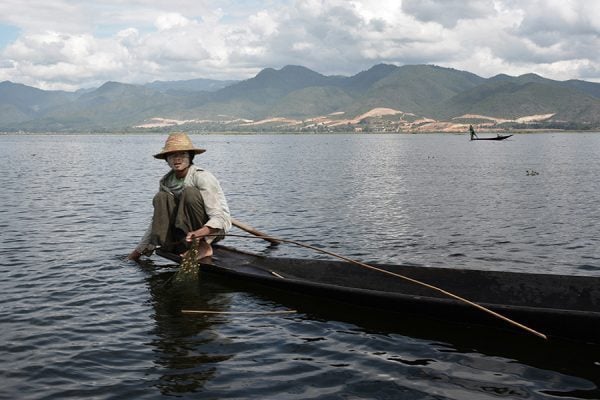 I love how this is part of the same Myanmar I experienced in Yangon, a country so complex that it cannot be understood by what you see on the surface, but that does its best to live up to its traditions and beliefs.

Getting to Inle Lake

The cheapest way to get to the lake is by taking a bus, arriving at Taunggyi (about 18,000 Kyats or $18 from Yangon), from where you will take a local taxi/pickup ($1) to Nyaungshwe, which is the main base for Inle Lake.  There is a government fee of $10 to enter Nyaungshwe.

I stayed at Inle Inn and I highly recommend it. I paid around $32 per night for a double room, but check online for current rates.

I rented a wooden longtail boat with padded chairs for 23,000 kyats ($23) for a day including Inn Dain Pagoda ($18 without the Pagoda). The price can be split with up to 5 people in the boat, so you can arrange the tour at your hotel or travel agency to fit more people to lower your cost.