I don’t know why, but I had a really hard time focusing on what to write about Bagan.  I mean, I loved… no wait, let me be more specific; I LOVED Bagan and I have millions of things to share about it, but somehow, all the ideas that came to my mind didn’t seem to do justice to how impressive Bagan really is. 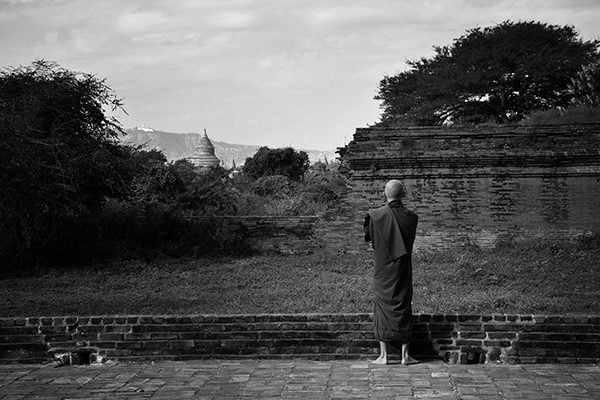 Sure, I could (and I actually wanted to) write about the temples not to miss in Bagan – it’ll make your life easier when it comes to selecting a handful of temples and pagodas from over 2,200 remaining structures.

But no, an important part of experiencing Bagan is getting to discover the temples by yourself – through your own journey and desires, not because someone told you “this is the best and this one sucks”.

Formerly known as the Kingdom of Pagan, Bagan was founded in 849 AD in the plains by the Ayeyarwaddy River, and in a matter of a few hundred years, it became the heart of a huge Buddhist kingdom that unified most of what we know today as Myanmar.

This is no typical archeological site.  Bagan has the history, architectural complexity, and natural beauty that rival sites like Machu Picchu and Angkor Wat, but –for the time being– without the huge number of visitors.

As cliché as it sounds (and I strongly avoid the use of the following word), Bagan was Magical – with capital M.  There’s an inherent beauty in being in a place that holds so many mysteries, yet it speaks loudly through its crumbling architecture, its reliefs, colorful frescoes, and gilded Buddha images.

Bagan is a legacy of the Buddhist belief that to build a temple was to earn merit.

You might think that 2,200 temples in a 26 square miles plain is impressive, but this is merely a small portion of the over 10,000 temples Bagan had originally.

These are the surviving structures that were not sacked during the Mongol Invasion in the 13th century or that survived fire, earthquakes, and looting as the temples slowly decayed into abandonment.

For me it was perfect to bike aimlessly for 4 days (yes, Bagan is huge) and literally stumble upon temples, hidden between layers and layers of trees in the middle of the dry plains that host this ancient city.

I had so many memorable moments in Bagan, but the funny thing is, they are probably the most mundane moments in most other places in this world.

But again, Bagan is all about getting to know the Myanmar that once was and that somehow still is – a Myanmar that is currently peeking out of the veil of seclusion it hid itself with for so many decades.

One moment that I’ll never forget was when I was in Dhammayangyi Temple, fascinated by its monumental size and all the monks around, and this lady came up to my friend, Leo, and I to sell us postcards.

Usually, I ignore them or say no politely, but she had some interesting postcards.  She had us.  She was really friendly and patient with us as we messed up her pack of postcards picking the perfect ones. 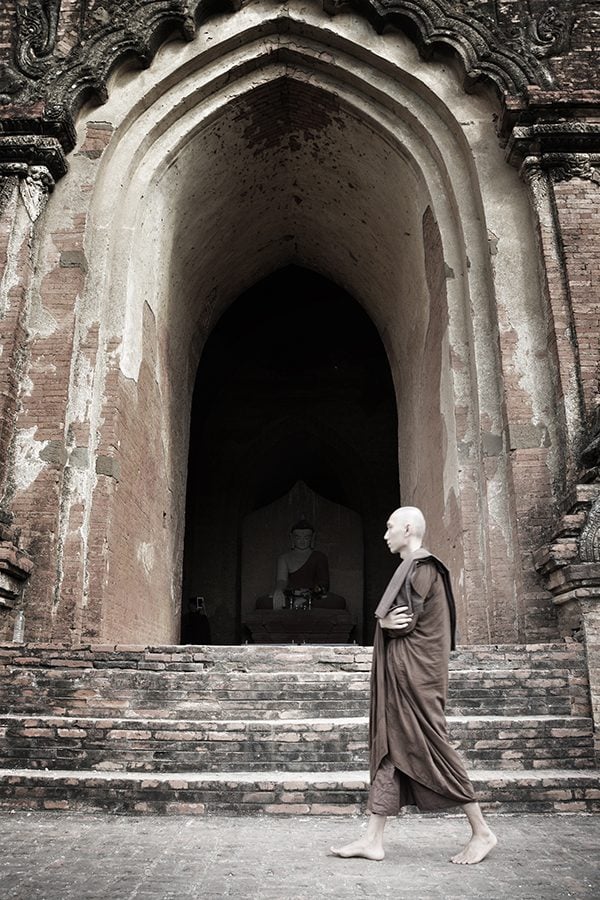 Among one of the postcards we selected, there was one with a lying Buddha.  We were impressed by it and asked her how to get there.  She couldn’t pinpoint it exactly for us, not because she didn’t know, but because explaining directions in Bagan is quite hard.

Bagan is mostly based out of two parallel streets where most of the important temples and pagodas are located. This is where most tourists stay since it’s easily accessible.

But, outside of those two parallel paved roads, there are hundreds of dirt paths weaving between trees and small plantations, reaching villages, small pagodas, and other colossal temples.

She tried to tell us we had to go through one of the many dirt paths, but we couldn’t understand her directions, so we discarded the idea of seeing the lying Buddha and continued our way through some other dirt paths.

The following day, as we roamed aimlessly again through more dirt paths –and frankly a bit lost– we stumbled upon a very small temple.  It is not impressive in comparison to the iconic temples like Ananda and Thatbyinnyu, but for some reason, we decided to stop in this one.

It looked different.  Unlike most temples in Bagan with a mostly symmetrical square plan, this one is elongated and quite low for its size.

We entered it, and as our eyes adjusted to the dark single chamber, we realized where we were.  We were at the temple with the lying Buddha!  We found it!  We weren’t looking for it, but reaching it and seeing the lying Buddha was really exciting and memorable.

I say the Buddha is lying, but in reality, this is a statue of Buddha after death, as the gatekeeper of the temple told us – unlike the reclining Buddha in the more famous Manuha Temple (also in Bagan) where he is entering Nirvana.

This is the beauty of going with the flow and your intuition, exploring on your own, and having a thirst for discovery and knowledge.

From far, most temples look pretty much alike, and if you’ve been to Southeast Asia for a while, you could say you’ll get “templed-out” easily. But for me, there was something about Bagan that made me crave for more.

When you get up close to each temple and pagoda, you see how it is characteristically distinct from all the other temples; whether through its architectural style, its stupa, the intrinsic reliefs, the glorious frescoes, its Buddha statues, the sound made by its tiny bells dancing in the wind, or simply, the view and environment around.  They are all different.

My daily routine in Bagan began waking up very early, sometimes as early as 5:30 am to see the sunrise atop one of the temples and continue exploring the maze of temples by bicycle.

With map in hand and almost no tourists in sight, I biked all morning through the plains – visiting new temples every day.  Then around 11:30 am I would go back to my hotel in Nyaung-U to relax and stay away from the intense midday heat, and then at about 2:30 pm I would go out again to visit more temples until sunset. 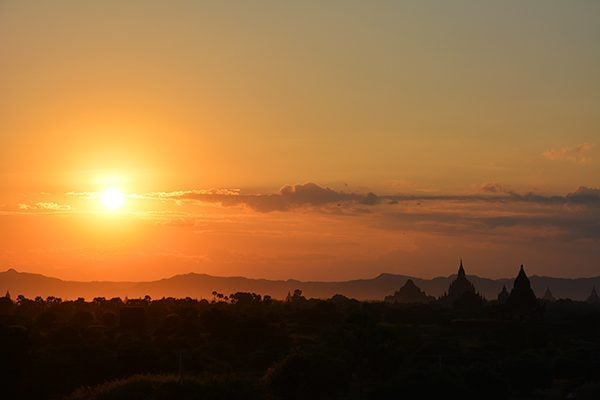 Now, sunsets… wow… sunset is the most magical time in Bagan.  The sunset here is an event where nature and the temples perform and dance together until twilight.

Ok, here’s the one direct tip I will give you.  There is the Shwesandaw Temple, also known as Sunset Temple.  Yes, you’ll think that watching the sunset from here must be magnificent, but so does everyone else in Bagan (especially the tourist that are taken there on tours).

The temple gets sooooooo full that not a single extra body fits on all five platforms and the stairs connecting them.  I decided to look for a lesser-known temple close to the Sunset Temple and watch it from there.  Best decision!

By the way, that’s part of the beauty of Bagan.  You can lose the (still small) crowds by biking through the dirt paths on your own.  Sooner or later, you will come across a temple with no one, or almost no one, in it.

Earlier in the day, as Leo and I were biking through the plains, we came across this small temple close to the Sunset Temple.  There was no one there except for the gatekeeper.

In Bagan, most temples have a gatekeeper – a local who either lives near the temple or who sells his painting and other art crafts in the temple.  This one offered to let us climb to the top if we offered a small donation – aka. Bribe ($1).  We were fine with that, so we returned close to sunset. 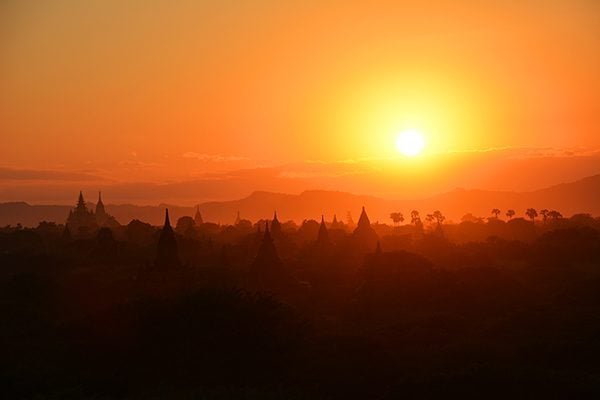 The temple was ours.  It was truly peaceful.  We saw how the sky changed its hues from blue to intense yellow and orange as the sun began to set.  Trees morphed from green to black and the top of the pagodas, which poked high through the top of the natural canopy, turned from old brick brown to dark other-worldly silhouettes.

You hear nothing but the birds and the breeze as the night sets in and the warm air dissipates, letting the cool breeze take over the plain.

We repeated this ritual every sunset, picking a different temple each day, in different parts of the plain.  Each one was as beautiful as the last one, each with a different interaction with the gatekeeper.  Some were more interested in selling their art while others were really interested in chatting with us (and even refused our donations).

I could continue telling stories about Bagan because every moment there felt like a new experience to me, but I’ll end it with this one.

On one of the many bike rides, I passed by Lemyethna and Payathonzu temples, and next to it were two ladies (goatherds) walking their goats.  As we crossed paths, I noticed one of the goats strayed from the herd.  I stopped to look at the goat to see what would it do.

I was sure the goat would find its way back to the herd, but for some reason, I felt like it was truly lost.  I kept looking for a few minutes, hoping for one of the ladies (or their dog) to come back for it or for the goat to move forward, but nothing.

Then my “rookie goatherd” self took action by guiding the goat forward with my bike’s semi-annoying bell. I was far from excelling at this new skill, but I managed to reunite goat and goatherds. They looked at me quite perplexed when they realized I was bringing back one of their goats.

Foreign words meant nothing to each other.  Smiles and gestures did all the talking.  It was all gratitude. 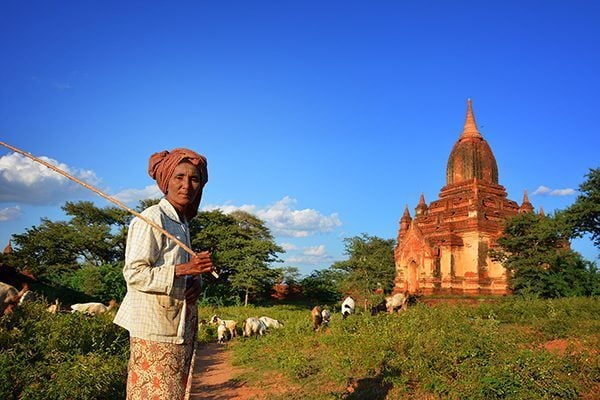 I stood there looking at the scenery I had before me – soaking it all up because I knew moments like these don’t come that often.  It was a moment straight from one of those tourism commercials idolizing the picturesque past by showing how beautiful and pleasant it all was once. 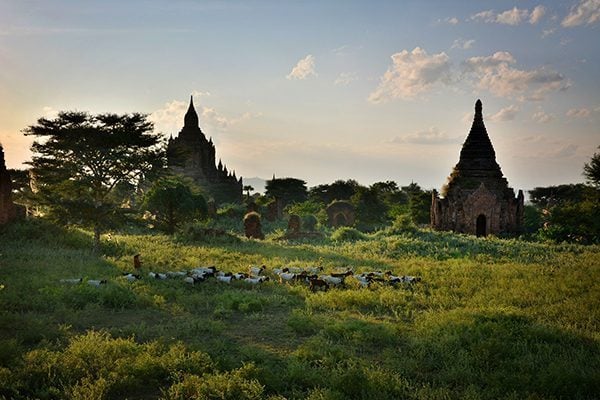 This moment, though, was all real.  Bagan does not idolize its glorious past.  Bagan lives it through every genuine daily task, every ancient building, every gesture.  This is still an extremely unsullied destination.

I wish Bagan gets to conserve its genuine spirit and aura, because there are not many places in this world with similar stature and beauty where you feel like you are truly living, breathing, and understanding the destination as it really is.

Tourists need to pay a $15 government fee to enter Bagan.  The pass is valid for 5 days.  Have exact change with the value of $15 in new and crisp bills.  No stains, no creases, etc.  They will refuse them otherwise.  You can pay in euros too, but they charge 15 euros instead.

Try not to miss the following temples: