Falling In Love With Essaouira

Essaouira is one of those small towns in Morocco you hear people say how much they loved, yet you don’t get to know much about it. That is until you get there. And once there, you see why people love it!

I reached Essaouira after a 3 hours bus ride from Marrakech. It was a huge contrast going from a major inland city to a small coastal town.

As soon as I hopped off the bus, I walked straight to the medina and checked in on my hotel – Maison du Sud.

I was immediately welcomed with a nice cup of Moroccan tea with mint and great hospitality. What I liked the most about Maison du Sud was its centric location in the medina and that it is a riad.

A riad is a traditional Moroccan house with an interior courtyard or garden.  In fact, the word riad comes from the Arabian term for garden, ryad.

These houses were designed this way in order to provide privacy to the family (especially for women) and to protect themselves from the Morrocan weather.

Maison still conserves its riads characteristics, which makes it a very charming place to stay and experience the architecture that once dominated the domestic environment in Morocco.

Now, going back to the point I made before about not knowing much about Essaouira before going there.

Well, in my opinion, Essaouira is not one of those towns you go to sightsee and check your “things to do” list. In fact, do a “things to do in Essaouira” Google search and you won’t find much.

Essaouira is more relaxed and in order to enjoy it, you just have to experience it as if you had nothing to do and go with the flow. Don’t worry; if you’re looking for activities to do, believe me, you’ll come across them as you walk around. You’ll see.

The next morning I made the point to walk aimlessly around the medina and along the beach. Walking up and down the beach strand and the main streets in the medina is the thing to do in Essaouira. Everyone does it, especially at night.

Just a 3-minute walk from the hotel and I bump into the first interesting sight, the fortress walls of the medina. The medina is actually a UNESCO site since it is a great example of a late 18th-century fortified town. 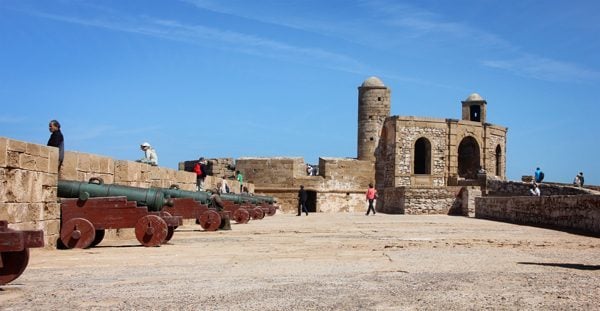 The fortress walls are built right at the edge of the sea, on top of the rock formations, and border the entire medina all the way inland.

As you walk on the walls by the sea, you can hear the sound of the waves crashing with a strong force against the rocks.

And once you step into one of the crenellations atop the walls facing the sea, you intensify the sounds with the view of the waves and the flying mist created after the crash.

It is a beautiful setting that could leave you perplexed for hours. 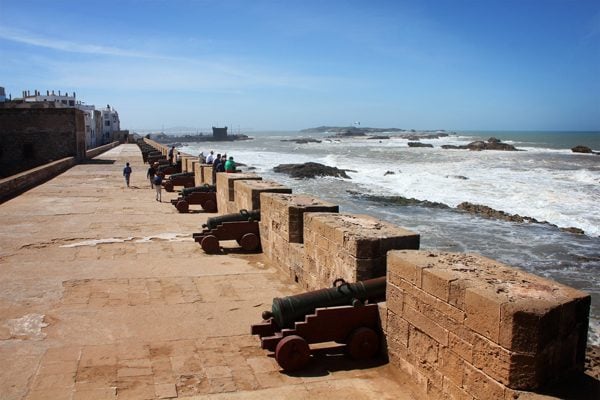 I continued my walk along the coast to find the Skala du Port, a fortification dating from the Portuguese occupation.

I paid the 10 Dhs to walk up the fortification. Totally worth it. From it, you get the best view of the medina and its walls, on the opposite side you get a vantage point of the old port, and a bit ahead you see the Iles Purpuraires and its Phoenician ruins.

Back in time, the Romans used to scour the bay for murex shells to make the purple dye for their robes – hence the name of the islands.

The view is beautiful, and I dare to say very dynamic thanks to the thousands, yes, thousands of seagulls flying all over the place.

Here once stood the Castelo Real of Mogador, built by the Portuguese in the 16th century, back when Essaouira was called Mogador.

To me, the old port looks like it has been operating in the same manner for hundreds of years. It’s all very manual.

Fishermen unload their daily catch, clean and sell the fish right there, prepare the hooks and nets for the next catch, and even build and repair their boats by hand! 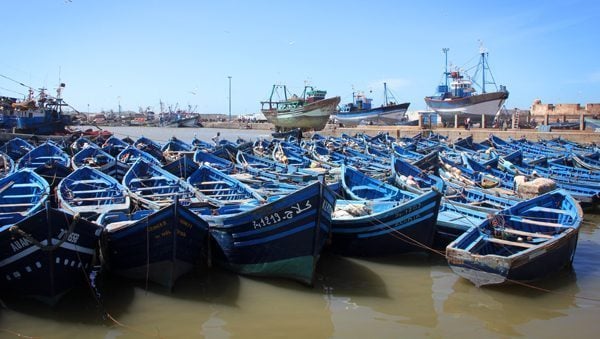 Beyond the active labor, the port is a very colorful setting of blue boats, colorful flags, brown fortress stones, and more.

I don’t eat fish, but I’d say this is the place where you should eat fish.

Then, it was time to extend my walk towards the beach.

I walked for a couple of miles, seeing dozens of camels and horses along the beach –many of them in a queue for you to ride them– and active sports like Quad Biking, windsurfing, kite surfing, and other watersports. See what I said? You just have to walk to find all the stuff Essaouira has to offer.

I didn’t do any of the activities since I’ve done them before and was just in the mood to have a relaxing walk on the beach.

I continued walking until I reached the estuary.  I was almost about to turn around and return until something caught my attention. From far it looked like a mass of rocks on the sea, but with a closer look, I could see it was not natural, but man-made.

I was curious, but there was one problem. I was wearing jeans and sneakers (since march is still a bit chilly), and the “curious thing” is on the other side of the estuary.  Hmm, what a dilemma.

I just took off my sneakers, rolled up my jeans to my knees, and crossed the estuary.  Unfortunately, the estuary was slightly deeper than knee-high, so my jeans got all wet, but I didn’t care.

I reached the mass of rocks, which I found out later is called Bourj El Baroud. This is a ruined watchtower set on the edge of the beach.

During low tide, you can walk up to it, but on high tide, the strong waves crash into it with no mercy. This kind of setting is something you only see in movies! 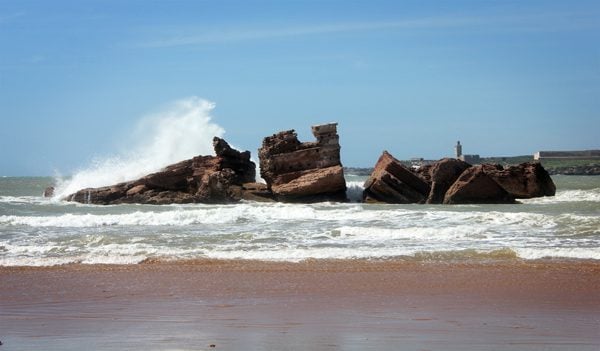 People in Essaouira refer to it as the Portuguese Castle, but in reality, it was not made by the Portuguese, but by Mohammed ben Abdallah in the 18th century.

People also say it was the inspiration for Jimi Hendrix’s song, Castles Made of Sand. Well, it isn’t as supposedly Hendrix visited Essaouira once in 1969, two years after the song was made.

Anyway, this brings up another characteristic of Essaouira. It used to be a hippy center back in the ’70s, with high influences of Bob Marley and Jimi Hendrix.

Nowadays you can still see faint traces of its hippy past when you walk past a few stores, see some interesting locals, and get offered hashish here and there.

Hashish or not, one thing is for sure in Essaouira; it will be easy for you to relax in this small town and love it for its history, beauty, and simplicity combined.

Now you know why I love Essaouira. Can’t wait to go back!

14 thoughts on “Falling In Love With Essaouira”