I got off the plane to step onto the wet tarmac. I could smell what was left of the rain that soaked this archipelago just hours ago and the salty sea washing ashore just meters away. I could feel the warm breeze blowing through the palm trees and every inch of my body. It was midnight, but it all felt like a tropical paradise. I was clearly in the Maldives.

A short taxi ride and I was at my hotel in Hulhumale. It was literally in front of the beach, but the beach would have to wait until morning.

Morning came and I drew open the window curtains to this… 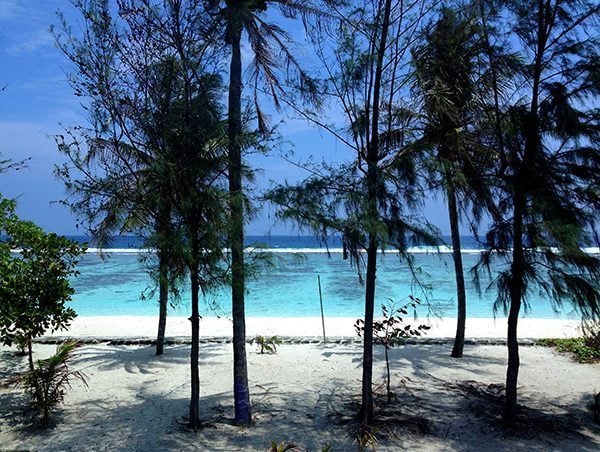 Maldives welcomed me with a beautiful day, clear waters, and gorgeous views. Hulhumale is a man-made island, so its beaches (naturally) are also man-made. They are not made to be swimmable; instead, they are full of corals to prevent erosion. Still, it’s such a great feeling to dip in your feet, sit in the warm water, and simply feel the waves swaying you back and forth, like a baby on a swing.

While I could enjoy the beach without my t-shirt on and just wearing my swimsuit, the same cannot be said for women. Since this is a Muslim country that adheres to certain strict Islamic rules, women must be covered at all times – which obviously means no swimsuits on the beach. 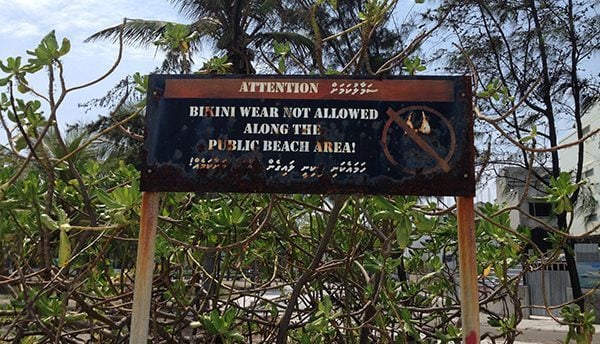 Local women don’t have the privilege of wearing bathing suits and sun tanning like westerners do in their own country. Westerners, on the other hand, can only do so in resort beaches or on beaches located in uninhabited islands or dedicated specifically to tourists.

Among these islands is Kuda Bandos (also known as Picnic Island), which is exclusive to foreigners from Sunday to Thursday and to locals on Friday and Saturday (which is their weekend). It’s clear how there’s a great divide in how, where, and when foreigners enjoy the Maldives versus the locals. It’s almost like water and oil. They don’t mix easily.

It’s no surprise this happens since Maldives introduced tourism into its culture barely 40 years ago, and it wasn’t until 2009 that foreigners were allowed to stay in local islands, not just the resort islands. This opened up a whole new style of tourism that can go a bit deeper into the lifestyle and culture of Maldivians yet at the same time, imposes a new set of restrictions on how you can spend your time there. This is why resorts are so secluded, to keep foreigners from “disrupting” the Islamic lifestyle of locals and to allow tourists to be free to sunbathe in bikinis and drink alcohol on their vacation.

On the other hand, when it comes to socializing, Maldivians are more than welcoming and the first ones to invite you around for a game of chess, a non-alcoholic drink, or some dhufun – a type of nut (arecanuts) eaten with bitter leaves, cloves, white lime (a coral), and heerapanna (a powder of fruits and vegetables).

I was floored when a local came to me and offered a beer. I looked at him and said yes without thinking twice. I was offered beer in a dry country! The only places you can drink freely are either at the airport or the resorts. Turns out, he came back with two non-alcoholic beers. I hid my slight disappointment and proceeded to sit down and chat with him, just steps away from the sea. I simply imagined I had a real beer in my hand.

After some sea and sand contemplation, I took the ferry from Hulhumale to Male to explore a bit more of the capital city. As we navigated between islands, a pod of dolphins swam and played next to the ferry for a couple minutes. What a welcome!

I strolled around Male’s narrow alleys and relatively tall buildings. I can’t say much about Male’s architecture, though. It lacks any sense of aesthetics and there are no major sights, except for the obligatory grand mosque found in every Muslim city, which in the case of Male is the Friday Mosque or Malé Hukuru Miskiy. One thing I’d like to point is that historically, Male used to be a walled city surrounded by fortifications and gates. It was the King’s Island, from where the ancient Maldive Royal dynasties ruled and where the palace was located. Back then, the city used to be called Mahal. This, though, does not exist anymore. The Royal Palace was destroyed along with the picturesque forts and bastions when the city was remodeled under President Ibrahim Nasir’s rule (the first president of the second republic of Maldives) in the 1970’s in the aftermath of the abolition of the monarchy. Talk about razing your own history.

This, though, didn’t diminish my interest in walking more. I paid attention to other things. I saw the curious school uniform girls wear. They wear a jilbab (which is the traditional long and loose-fit garment worn by some Muslim women) covering them from head to toe, showing only the face and hands. I can only wonder, aren’t they hot under all that clothing? For sure I was sweating under that blazing sun with only my shorts, t-shirt, and flip-flops.

I enjoyed seeing the little shops and local eateries selling their traditional dishes, which as expected, are mostly based on fish – especially tuna. I loved seeing Dhivehi written all over the place. This is their official language, and it looks like a bunch of funky commas and pigtails. The origin of the word “Dhivehi” is Dhiv+vehi meaning “Islanders’”. Quite fitting, giving that this is an islanders’ language.

As I walked along the waterfront, I couldn’t miss noticing how clear was the water. I could see colorful corals and dozens of fishes swimming around. I was astonished. Normally, waterfronts and piers tend to have murky dark waters, but not here in Maldives! These waters were a clear as it could get, almost as if you were in an aquarium or snorkeling without getting wet.

I sat at the pier to simply look at the water. I sat for a long time. Zoned out. I probably looked depressed or suicidal, sitting at the edge of the pier with my focused gaze piercing the water, but I simply couldn’t stop marveling at the fishes. So beautiful and colorful!

Who needs to snorkel here when you can see this from the pier? Well, as I discovered, snorkeling and diving are much, much, better!

The rest of my time in the Maldives followed the same laidback style where I would wake up, do an activity during the day, and then chill out in the afternoon by taking a ferry to an island, walking around the beach or town, relaxing at the beach, or even playing chess with the locals (they love this game!). The Maldives are always advertised as a destination for couples, but as I discovered, there’s a lot you can do solo too. 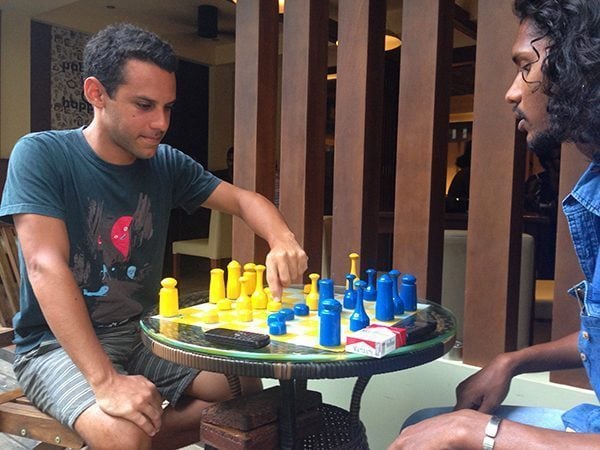 I obviously couldn’t miss the opportunity to dive and snorkel in these crystalline waters. I went diving around the Male Atoll in a few gorgeous spots close enough to the over-water bungalows and far enough to be able to go as deep as 30 meters to see sharks, stingrays, mantas, napoleons, puffer fish, turtles, eels, and gorgeous colorful corals everywhere.

My divemaster said the water wasn’t as clear as he hoped, but to me, that water was crystal clear! Just look at the pictures! Well, if it was that beautiful with slightly “murky” water, I can’t imagine how it would look fully clear. Seriously, diving in the Maldives is an experience you can’t miss. 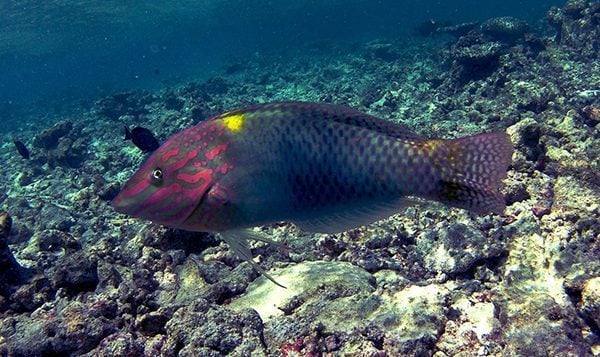 Snorkeling followed the next day and it was just as impressive as the dive. What a sight to see dolphins fighting barracudas just a few meters from you! I was dumbfounded. Dolphins won, which was followed by celebratory playful noises and popping in and out of the water until they faded away into the deep sea.

After snorkeling, I spent hours talking to locals at Kuda Bandos. We chatted about life in the Maldives and several topics in between.

I was interested in everything they said. They told me how the islands were affected by the 2004 tsunami (some of them completely wiped out and fully submerged), how Somali pirates make their way towards the Maldives to catch their bounty and how local fishermen gang together to trap them until authorities can apprehend them (don’t worry, Somali pirates don’t venture there that often, so it is safe), how Male has 5 gangs that control 5 territories in the island, yet they have a pact to not fight against each other. Apparently, after one of the worst gang fights in Male’s history, they decided to not fight again, so if one gang fights against another, the other 3 gangs will back up the gang on the defensive side. And much more was said to fill pages…

Certainly, the Maldives moves at a much amicable and slower pace than most places I’ve visited, so I made sure to spend the rest of my days in the islands following their style… slow, chilled, and totally relaxed, yet slowly immersing myself in what makes the Maldives unique and home to over 300,000 people. Plus, as I experiences, it can be done on a budget!

Can’t wait to go back!