Cinque Terre: Getting the Best Of “Five Lands” In A Day

Cinque Terre, which means Five Lands, had been high on my list of Italian places I had to experience, yet somehow, I always found a way to delay my visit.

That was, until a few days before I left Italy, that I decided to hop on an early regional train from Milan to Levanto, to finally visit these five mystical medieval villages that have called my attention for a long time.

At around 10:00 am I arrived at Levanto’s station.  I was clueless on how to continue to Monterosso, the closest village in Cinque Terre, so I stood on the platform –looking everywhere– hoping that the answer would magically appear. 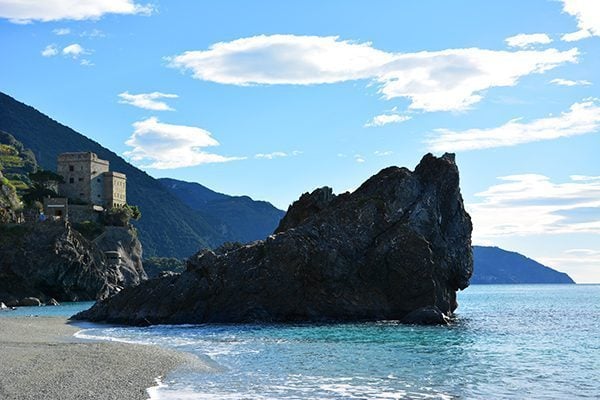 Levanto is a small town located just a few kilometers from the five lands, and while it is not one of the Cinque Terre, it is included in the Cinque Terre National Park.  This town and La Spezia (on the opposite end of Cinque Terre) are the best starting points for your visit.

Right at the station, I saw a tourist information booth dedicated to Cinque Terre, so I immediately asked how to proceed forward.  To visit Cinque Terre, you just have to take one of the regional trains scheduled to stop in each of the five towns.

I was supposed to buy a ticket worth 12 Euros, which allowed the entrance to the National Park and its trails, and gave unlimited rides on the train (to hop on and off on each town).  But, since I visited in Mid-November, it was off-season and the park entrance was free.  I still had to pay for the train pass, though, which was only 6.40 Euros.

What followed after made this day one of my most awe-inspiring days in Italy. 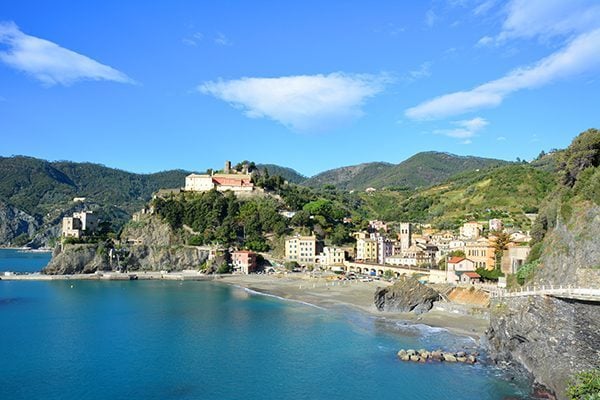 After just 10 minutes on the train, I arrived in Monterosso.  It is actually two towns in one –Old Monterosso and Fegina– connected by a short tunnel.

Fegina was developed in the 50s, but Old Monterosso still holds the charm that is comparable to the other Cinque Terre villages – though not as steep and slightly bigger than the others.  Monterosso also has the longest beach between the villages, and a beautiful one it is.

I love how Monterosso maintains its maritime tradition and still presents signs of previous sea battles through its architecture; like with the medieval tower that now is the bell tower of San Giovanni Church, the castle that overlooks the sea with its three round towers, and the Aurora Tower, the only surviving tower (out of thirteen) that protected the village.

After strolling through the sandy beach for a while, I made my way to the Sentiero Azzurro – the blue trail. 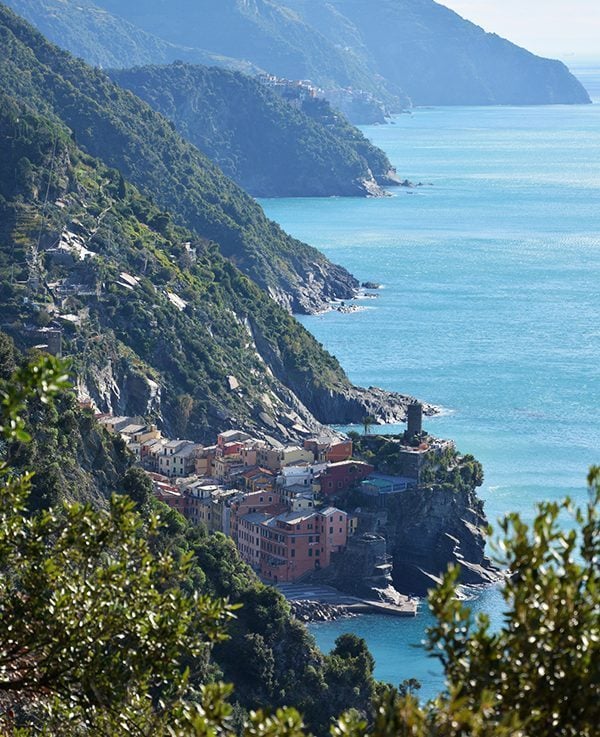 This trail is probably the most famous one in Cinque Terre since it goes from Riomaggiore to Monterosso, connecting the other three villages in between.  This trail is divided into four sections (one section between two villages).

I decided to hike between Monterosso and Vernazza, which turned out to be a 2-hour challenging hike.  The trail went through some steep hills, stepped areas, and narrow paths near cliffs.  Still, the challenge is well paid off with the gorgeous views of the Italian Riviera and the first peek of Vernazza from above – halfway along the trail.

There are several vineyards and olive groves along the route, which add to this romantic image of the Italian countryside.

When I did the hike (November 2013), two of the four sections were closed due to landslides, including Via dell’amore, which is the easiest and “most romantic” section of the trail, connecting Manarola and Riomaggiore. But, as far as I know, they reopened at some point in 2014. (check here for the current status of the trails) 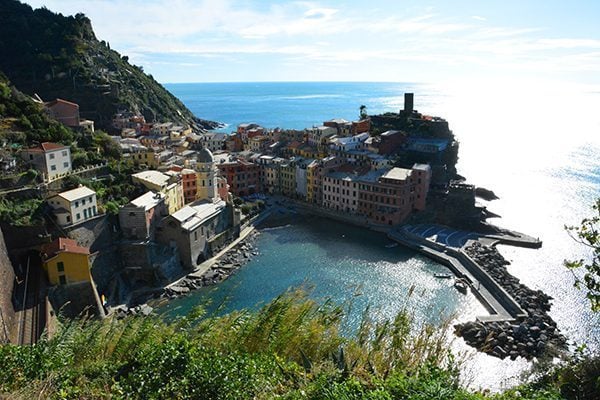 If I could only give you one tip about Cinque Terre, it would be NOT to take the train from Monterosso to Vernazza, instead, take the trail as I did.  Seeing Vernazza for the first time while on the trail is a moment that deserves admiration.

It will also be one of the most beautiful sceneries you’ll see all day.  The steep rocky mountainside dipped into the blue ocean complemented by a small town with terracotta tiled roofs poking out of its side and holding a piece of the sea for itself.  It is simply beautiful.

As I arrived in Vernazza, I could see its two ancient towers from far, and once in, I strolled aimlessly through its maze of tiny streets and mysterious alleys.  Vernazza has this rundown look with its cracked buildings with their red, yellow, and pink paint slowly peeling away, showing moldy spots and weathered materials behind. But that’s part of its charm.

I truly loved how the alleys showed me different scenes at every turn and how suddenly everything turned into a central open space where the central square and dock are located. 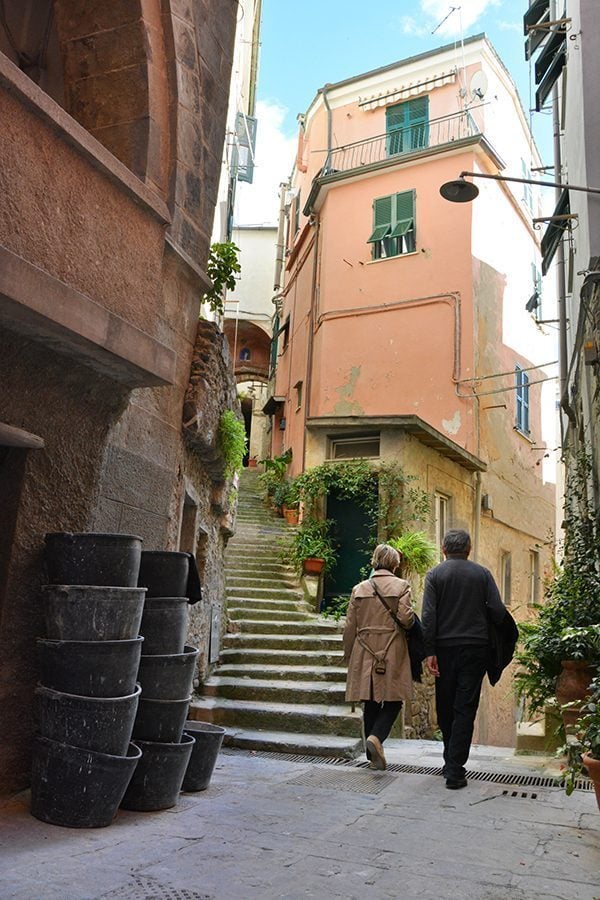 Beyond the church of Santa Margherita of Antiochia and the remains of the ancient fortress, which includes the towers of the XI century, the Doria’s castle, the tower of the friary of Padri riformati di San Francesco, and the tower Belforte; Vernazza shines with its authentic congenial charm.

It is the “Miss Congeniality” of Cinque Terre and to this day it is considered one of the 100 most beautiful villages of all Italy. 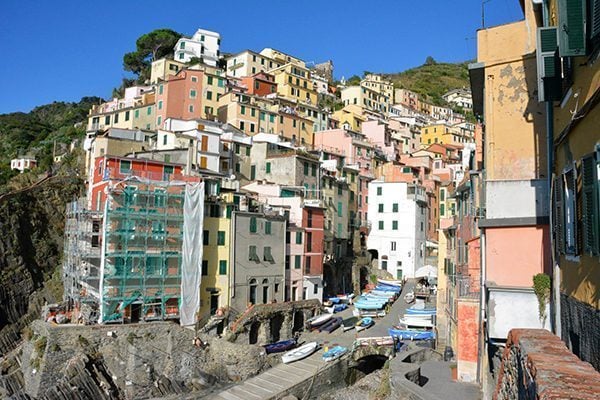 Next, I was supposed to go to Corniglia, but the train I hopped on took me instead to Riomaggiore (my fault). It was fine; I would just go backward to the other two towns.

It was already afternoon, and I could hear the bells chiming to the hour.  After a short (but expensive) lunch, I headed uphill to explore Riomaggiore little-colored houses, alleys, and castle.  The houses here are particularly interesting. They were built vertically due to the steep slopes and face an alley on each opposite side.

Each house has two entries: one is at the level of one street while the other is at the level of the upper street.  It was well worth going up to the church of San Giovanni Battista and the Castello sul colle di Cerricò, from where I could get a beautiful panorama overlooking the sea. 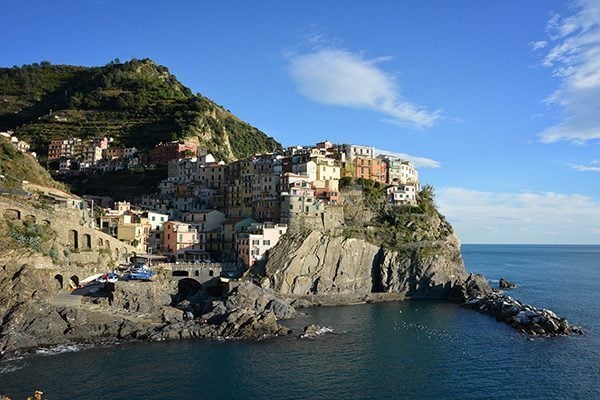 Manarola instantly became my second favorite village in Cinque Terre.  It is filled with covered fishing boats on its lower side, by the pier, and gravity-defying buildings on the edge of the upper cliffs.

Manarola is a village completely incorporate into its surroundings, making an interesting architectural dialogue with nature by following organically the cliff and sharp rocks.

I enjoyed Manarola the most by sitting on its pier, which holds a few covered boats that probably haven’t felt the sea in years and a little terrace with picnic tables.

Right by the edge of the sea, there are some big rocks where you can go and sit down to admire the breathtaking scenery and the uniqueness of this town.

In the high part of the town, there’s the church of San Lorenzo, built in 1338 in Gothic style, with three beautiful naves and baroque interiors. There’s also the ancient White Bell Tower, the old San Rocco Hospital, and the Oratory of Disciplinati della Santissima Annunziata dated around 1400. 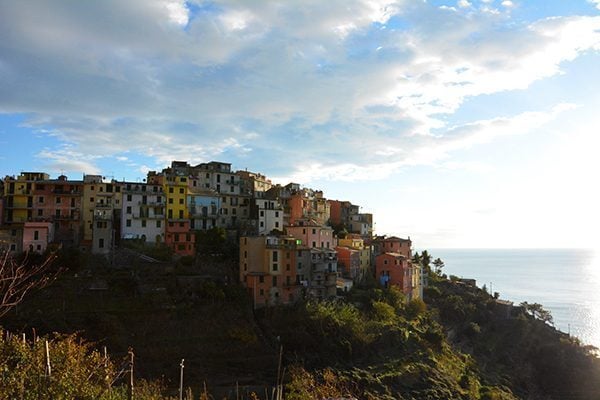 Corniglia, the smallest and quietest of the five, was my last stop for the day.  Contrary to the rest of the towns in Cinque Terre that slope down to sea-level, Corniglia is perched on top of a tall cliff – which can be reached by walking up the “Landarina”, 33 flights of stairs with a total of 365 steps (one for each day of the year) or by taking the bus – which costs 2 euros.

It is said that the name of “Corniglia” comes from the name of a Latin farmer “Corneliu” who produced the well-known white wine, already famous in Roman times.

It was around 5 pm already, so after a quick visit to the Gothic church of San Pietro and the XVIII century square “largo Taragio”, I walked down the stairs to watch the sunset with Corniglia in the foreground. 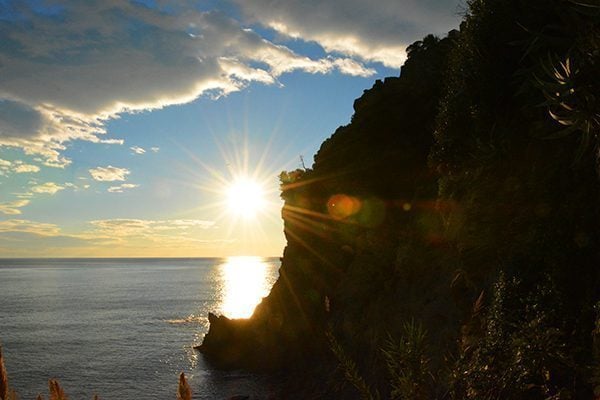 I headed back to Levanto to make my way to my hotel for the night.  I stayed at La Francesca, which is only 4 km past Levanto.  It was the perfect place to continue the Cinque Terre-esque vibe, but a bit more into nature in a less dense environment, and without the associated high costs.

The resort feels like a small village with its houses sprinkled down the hill in a very organic way until it almost reaches the sea. 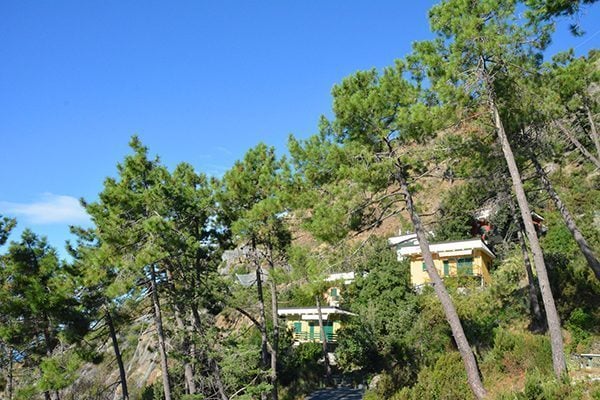 My apartment-like room was very comfortable, but my favorite part was the view of the sea.  This is the main attraction of Cinque Terre and the region – its landscape. 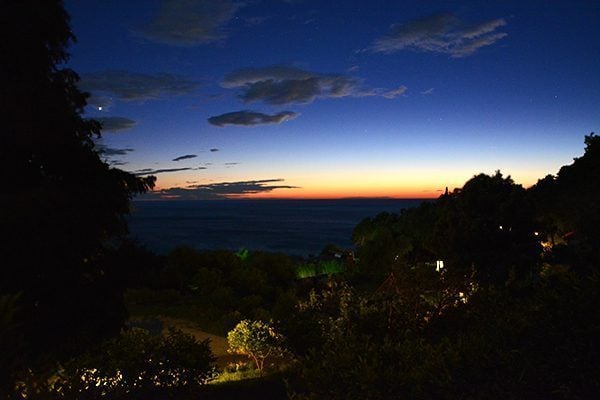 The next day, I walked around in nature for a while, before heading to the train station to make my way back to Milan – a 3 hours ride that would serve me well to marinate my thoughts, experience, and the intense beauty of these villages.

To enter the Cinque Terre National Park, you need to buy a 12 euros ticket that includes entry to the hiking trails and unlimited train rides for a day.  Alternatively, if you go off-season as I did, the trails might be free, so you only need to pay around 6.40 euros for the trains.  The bus to go up to Corniglia costs 2 Euros each way.  There is also a ferry that connects the villages.  It costs between 11 to 22 euros depending on the route.

Food is very expensive in Cinque Terre, but there are small trattoria (cafes) and food stalls that offer relatively cheap food.

I stayed at La Francesca, just 4km outside of Levanto. It offers various villa styles to rent, all including a small kitchen, living room, bathroom, bedroom, and balcony.  If you don’t want to test your Italian cooking skills in the kitchen, they have a restaurant downhill with a prime view of the sea.

7 thoughts on “Cinque Terre: Getting the Best Of “Five Lands” In A Day”