A few days ago I celebrated my birthday, a day that for weeks I tried to plan to be in a really cool place and with nice company.

It was my first birthday during my RTW and I really wanted it to be special and fun. Well, turns out things didn’t go as well as I expected.

I celebrated my birthday in India, which is so far the country I’ve hated the most, ever.  Not only that, but I really didn’t know where to go.

Delhi is just a hopeless chaotic mess, Manali was nice but I was done with it, and well, I really had very few choices on where to go (that I really wanted to go). The choice… Varanasi.

I still don’t know why, but I chose to spend my birthday in a city where everyone is dead, dying, or praying to someone dead. Cheers to me!

I took the overnight train from Delhi to Varanasi, to make my “triumphal” entrance into the holy city during the morning of my birthday (September 7).

While I met a really cool couple on the train and we chatted for a good while, arriving in Varanasi on the day of my birthday meant that: 1) there was going to be some hustling around to find a place to stay, and 2) there was a high chance that my birthday would be a party of one.

I was ok with spending my birthday on my own, but I was not in the mood for hustling. I’m up to my non-existing tits with hustling in India and the last thing I wanted was to end up in a bad mood with anyone trying to scam me (as most of them try to do).

As soon as I arrived in Varanasi it was game on with the hustling. As expected, the rickshaw driver took me to the wrong hotel saying it was the one I asked for (as if I’m some kind of an idiot), making me storm at him to take me to the correct place.

And to top it, another storm was showing off its skills.  It was raining like only an Indian monsoon knows how to do and it was ridiculously hot!

It goes beyond saying that this was not the birthday I hoped for.

After settling in my place and cursing a few times (of the many times I’ve cursed this country), I took a nap in hopes of waking up in an alternate dimension outside India (seriously).

I woke up, no alternate dimension, but at least the sun was shining brightly and the temperature wasn’t as intense as before.

All I could do was to take a walk with me, myself, and I (and thousands of Indians who enjoy pushing your buttons).

I walked randomly to a ghat (steps leading to the banks of the Ganges River), which happened to be a burning ghat. They were burning the body of a deceased person right when I showed up.

Varanasi is famous for this ritual, and pretty much every tourist comes here to see it in action – it’s one of those things you do in Varanasi. Locals flock here from all over India to be burned ceremoniously in this “holy” city and to have their ashes spread on the Ganges.

It might be “holy” but it is one of the dirtiest and nastiest places I’ve ever been. Trash is all over the city in countless mounds, cow, sheep, dog, and human poop is everywhere! You literally have to look carefully where you step, or else you’re guaranteed a feces party all over your feet.

But, back to the burning…

As I was explained by a very nice local working at the burning ghat, when someone dies, the body is covered with silk fabrics and flowers and is brought here (and other ghats) after parading the body on a bamboo stretcher along the streets of Varanasi.

When they reach the banks of the Ganges, the face of the deceased is uncovered and is laid right on the shallow waters of the river to be cleansed with the water and incense.

After the “holy cleansing” (that river water highly polluted with human remains, tons of trash, and high levels of E. coli virus… but yes, let’s say it’s holy water), the body is taken out of the water and it is put ceremoniously over the bonfire.

I really have no way to describe the feeling of laying sight on the deceased for the very first time and seeing how the body slowly decomposed to ashes.

The closest way I can describe it is like if I felt the deepest hole in my torso that left me out of breath, yet it froze me there and I couldn’t stop looking.

I found it interesting that only the closest male of the deceased can do the ritual and ignite the fire with the “holy flame from Shiva Temple”, and that women are not allowed to be present (except for a short peek) because their crying will prevent the soul from going to heaven.

Well, I think I spoiled a few people’s procession to heaven since I cried a lot, not because I was mourning, but because of the intense smoke burning my eyes (yet women are the only criers).

I stood at the ghat watching for a while how the body burned and how a dog chewed his way through a child’s ribcage he found on the banks of the river (did I mention the river is highly polluted with human remains?!).

This definitely trumps the unusual sights of my previous birthdays.

As it turns out, pregnant women, children, holy men, leprous, and people bitten by snakes are not allowed to be burned. Instead, they are tied to a rock and thrown into the river. The meaning behind this?!

According to them, these people are already pure, so they don’t need the burning flames to purify their bodies.

While all this might seem disturbing, the most disturbing part for me was the “clubbing” of the body. After the body has burned substantially, men start hitting it with wood logs so it breaks apart and decomposes faster.

I’m sorry, but WTF?!  What’s the point of all the holy ritual if you’re going to end up beating the corpse into pieces?!  How sweet it must be to see your mother, father, brother, etc, being “ceremoniously” treated like that…

In the end, the ashes are collected and thrown into the Ganges.

While I might not have understood the whole purpose or believed in all the details of the ritual, the fact that I was standing there, “celebrating” one more year of life in front of many corpses, kind of sank on me how lucky I’ve been to not only be healthy but to be traveling the world and seeing rituals and cultures like these.

Morbid? Yes… but it is quite a tragically beautiful way to see life from another perspective.

After all these shocking and sad visuals I made my way to Dasaswamedh Ghat to witness the ganga aarti ceremony with puja (the act of showing reverence to a god). Men show their respect to the Ganges with fire, offerings, and dance.

Though the ceremony was highly repetitive for about an hour, it was an interesting tradition to watch, and a good ritual to lighten the mood of the day.

I saw the celebration of life in many ways on this one single day:  through my birthday (even though it sucked), through the release of the souls during the burning, and through the puja.

While they all might be different, they all have a single purpose; to commemorate what we’ve had so far and to celebrate the possibility of a future in one way or another.

Oh, and Happy Birthday to me! 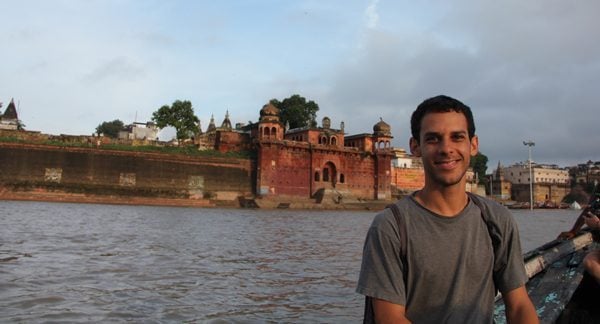