Reykjavik: Iceland’s Tip of the Iceberg

It was almost 9:00 am when my plane landed at Keflavik International Airport. I hadn’t been this excited to deplane in years.

An excitement that patiently crept inside me since I boarded the flight in NYC and that slowly started to build up as the plane flew over the iconic green hills that cover most of Iceland. No trees in sight.

I looked out the window like a kid, only wishing to be right out there, something I knew would happen for the next two weeks, and that was just minutes away from me.

Iceland has been one of those countries that I’ve wished to visit for years, yet I never made my way there – even when it was #1 on my bucket list.

The truth is, I made a promise to myself. I would not visit Iceland until I bought my new camera and improved my photography skills. A promise I kept until the day I bought my new Sony a7rii. Soon after that, I possessed my round-trip ticket to one of the most beautiful places on earth.

After I left the airport and picked my rental, I made my way from Keflavik to Reykjavik. There are so many unique places to stay in Iceland, but to start, I’ll explore Reykjavik – the capital city.

For Iceland’s standards, that 45-minute drive was pretty bland, but to me, it was already blowing my mind. Iceland was slowly introducing itself. You know, not to kill me with over-excitement or anything like that. Even though it was the middle of summer, the day was cold and cloudy – a typical day in Iceland.

Once I settled in my hostel, I took some time to explore my options on what to do during the next two days. I like to travel knowing where I will go, but I don’t like to plan what I’ll do until I arrive. I like to keep my options open based on what the place presents.

Reykjavik presented and delivered more than I expected.

As usual, I spent my first day walking and driving around the city center. I visited the iconic Hallgrímskirkja church, designed in 1937 by Guðjón Samúelsson with a style that resembles the basalt lava flows of Iceland’s landscape, as seen in Svartifoss waterfall.

Even though it was designed in the ’30s, it took 41 years to build the church – until 1986. Today, standing 244 feet tall, it is the largest church and the most recognized structure in Iceland.

Also on my list to visit were the famous Laugavegur walking street with its cute stores, bars, and cafes; the historic center, and more. Even Bjork’s house! (I love her!)

Being an architect, I couldn’t miss the opportunity of visiting the Harpa Concert Hall, which is the new home of the Iceland Symphony Orchestra and the Icelandic Opera.

Not only has this building become a visually stunning architectural destination, but the history of its construction is just as interesting – mirroring the economic highs and lows that Iceland faced in the last few decades. 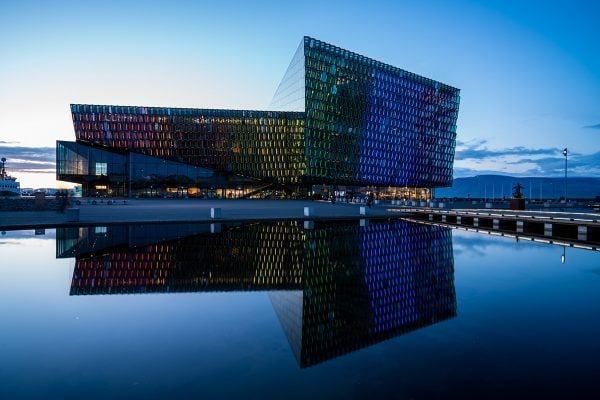 Like a kid, I went to every balcony, public space, every stair, every mezzanine – soaking up all the details, textures, and colors that make up this remarkable space. It instantly became my favorite place to be in Reykjavik.

An Encounter with Birds

While researching, I saw this interesting lighthouse –Grotta Lighthouse– located in the nearby town of Seltjarnanes, just 5 minutes away from Reykjavik.

The lighthouse is located on the westernmost point of Grotta Island – but this is not an island in the ordinary sense. During low tide, you can walk right over a small sandy bank, but during high tide, swimming is required (and not recommended). 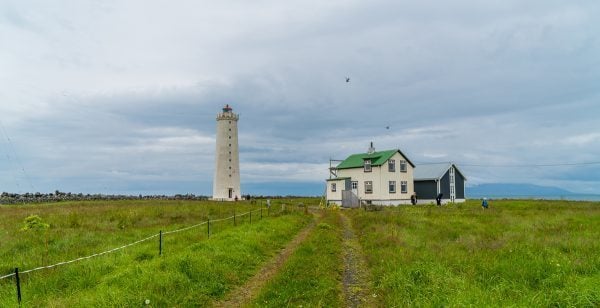 Luckily it was low tide when I got there, so I slowly made my way to it. As I walked, I noticed hundreds of birds flying all over me and around the lighthouse. It looked beautiful… until I saw the birds diving in my direction. They were in attack mode!

They dove, one after the other, only breaking their fall right over my head as to scare me instead of hitting me. Bird after bird, I squat to escape them, but they continued this fierce dance until I reached the lighthouse.

Later I learned these are the Arctic Tern and their nesting season is during the month of June. It was July already, but they were probably defending their nests around the lighthouse. Now I know.

To end the day, I waited until around 11:15 pm to watch the sunset from the beautiful Sun Voyager sculpture by Jón Gunnar Árnason, which is located on the waterfront, right next to Harpa.

I sat there until the hues of yellow, orange, and purple faded into a twilight sky. Being summer, the sky doesn’t go pitch black. It just gets dark.

I can’t wait to head out of the city and visit some of the best spots along the Ring Road all over Iceland. And, of course, I want to hit some of the best camping spots in Iceland to see these stunning sunsets, but surrounded by nature. 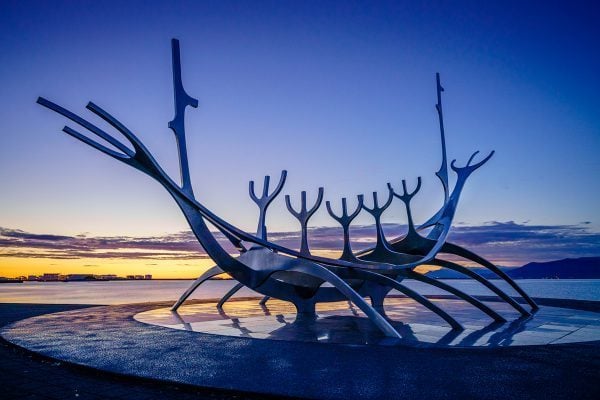 The Climax of a Perfect Introduction to Icelandic Nature

The next day I was ready for action and ready to dip my toes in the famous Icelandic landscapes. To do this, I planned a quad bike tour with Safari Quads to explore the outskirts of Reykjavik, especially the Twin Peaks.

The Twin Peaks are two hills not far from the city. While they might not be that high, they offer gorgeous views of the city on one side and unspoiled nature on the other side, as far as the eye can see. 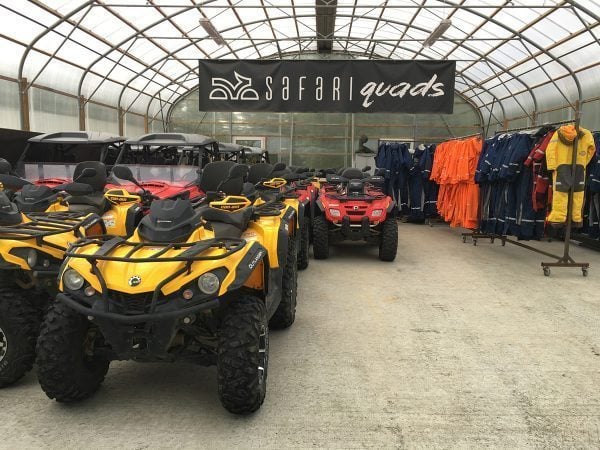 The quad tour started like any other, with a proper safety introduction and gear up. This is Iceland, so warm clothing is always recommended. I was the only one on my tour, so I had the freedom of choosing my pace. I chose adrenaline!

It all started smoothly on paved roads, but after a few minutes, the adventure began. Once on the dirt road, we switched the quads to 4-wheel drive and went up the muddy hills.

After some tough driving, we reached the first peak. I can’t remember if this one was Wolf Peak or Oats Peak, but I do remember being amazed by the view – even with the shitty weather. 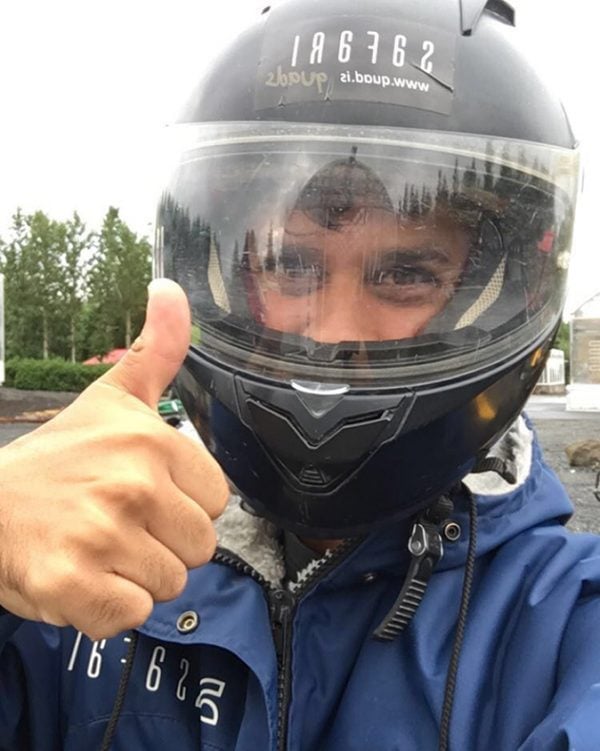 Right at the top, as we took our time to enjoy the view, my guide, Thor (so Scandinavian), took his time to explain a bit about the history of the area, what I was looking at, and some additional folk history.

We then sped our way down the hill, drove along the valley, crossed a river, and drove right up to the second hill – Wolf or Oats? ¯\_(ツ)_/¯ 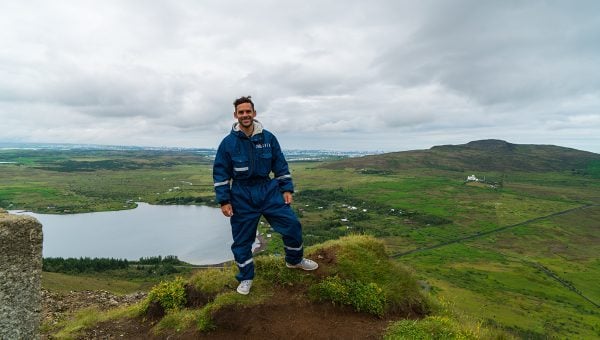 Now we had one of the best views of all Reykjavik. I could see from the distance the iconic tower of Hallgrímskirkja. Standing right there, blown away by the natural beauty, all I could think of was a comment a local made to me the day before.

He said, “Reykjavik is just the tip of the Iceberg. Wait till you really get away from the city, there you will be blown away for real.”

And yes, Reykjavik was just the tip of the Iceberg, but what a wonderful tip it was.

The quad tour I did was the Twin Peaks Tour with Safari Quads. At the time of writing, this tour is priced at 19,400 ISK (Approx. $169 with today’s rate). The tour lasts about two hours and departs every day at 9 am and 1 pm. It is available year round.

It is recommended to bring warm clothes and good shoes. A driver’s license is required.

From my experience, if you’re taking a camera, place it inside an impermeable bag in case of rain. And, even if it doesn’t rain, you’ll probably get a bit dirty with mud from the dirt roads, so protect your equipment the best you can.

If you like adrenaline, nature, and quad bikes, then this is a tour I highly recommend!

While I Reykjavik, I stayed both at The Capital-Inn and Hostel B47. Both of them were the cheapest options I found in the city at the last minute via Booking.com.

Reykjavik’s highlights can be easily done in a day, but if you want to take your time and enjoy the slow pace of the capital, then I recommend staying there two to three days before heading out to your next stop. 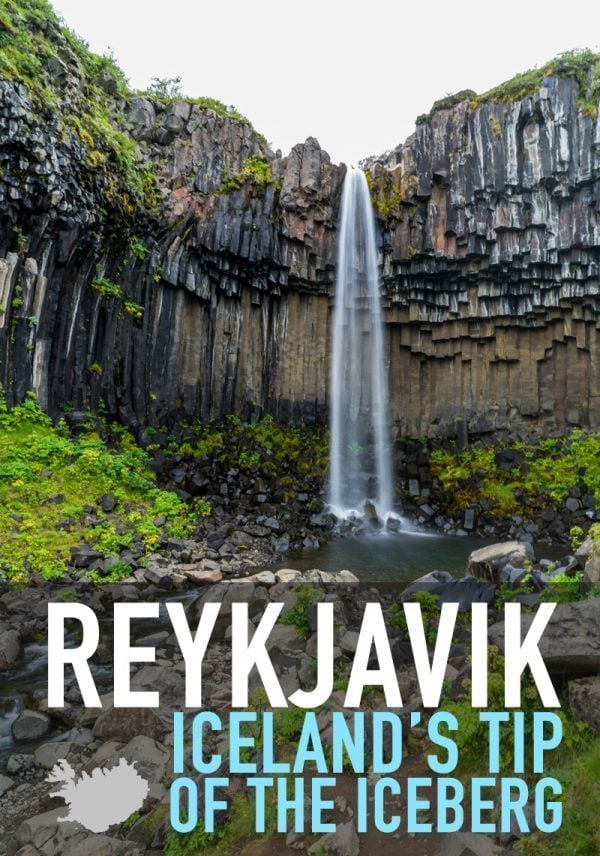 15 thoughts on “Reykjavik: Iceland’s Tip of the Iceberg”