Ethiopia had been a dream destination of mine for a few years, especially the Omo Valley region where most of their tribes are located. I had seen countless stunning pictures and a few documentaries showing their eccentric look and simple way of life. Now, I wanted to see that for myself.

Once I reached Ethiopia I discovered how hard it can be -time wise, money wise, or logistically- to visit the tribes, but I didn’t want to leave the country without seeing them.

I searched around through several local businesses for a way to get there, and luckily, through word of mouth I found a local guide that could meet my time constraints but was still over my budget (even when it was cheaper than the rest).

For a while, I debated if I had to just accept that I wouldn’t see them, but in the end, I decided to just risk it and go there. It turns out, it was one of my best decisions on that trip, as the Omo Valley became one of my favorite places in the country.

What follows are some of the most memorable experiences with some of the tribes I visited.

The Mursi: The Smart Ugly

The Mursi tribe lives in the Mago National Park, which is hours away from the closest city. It was a long, hot, and uncomfortable ride, but as soon as we reached the national park entrance, I knew this was going to be an interesting experience.

Once we got to the tribal village, Debebe (my guide) recommended me to leave my camera in the vehicle. Before taking any pictures, I was to walk the village and let them get comfortable with me.

I saw the women adorned with bull horns hanging from their ears and head, and large clay disks piercing their lower lips.

Some were fully dressed while others were comfortable with their uncovered tops. The men weren’t as adorned, but some sported the stretching ear plugs and tunnels.

After some initial interaction, it was time to get my camera out and see if they allowed me to take their pictures. I was dying for this moment.

I took my camera out, and immediately a bunch of Mursi came towards me wanting to have their picture taken. But there’s a reason for this, and a catch. They know I’ll be tipping them for each picture. They want the money.

Honestly, the whole thing was both nice and awful at the same time. It was nice because I got the shots I wanted.

It was awful because it literally ran like a casting call where I had to say “you, you, you… I want you in my picture. Ok, you and you now. I want you for this other picture.”

Some of them became quite pushy and grabby when I didn’t pick them, and there were moments when Debebe had to step in to “rescue” me from their aggressive persuasion.

I knew the Mursi are famous for being one of the most aggressive tribes in Ethiopia, but as I experienced, as aggressive as the Mursi can get to get those 5 Birr (about $0.25) per picture, they will never do you any harm. 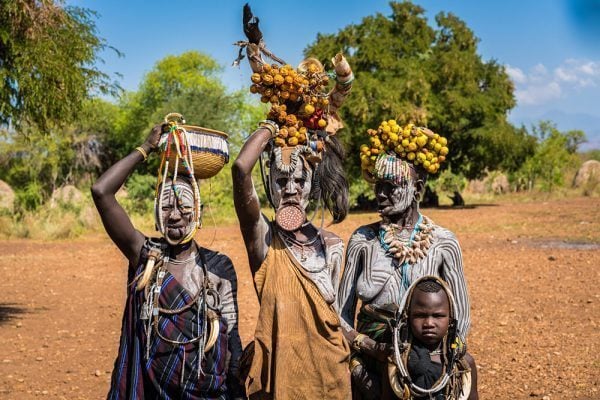 When I felt like I was done with the “setup photos,” I walked away and roamed around the village, this time taking pictures of their village and other people who were going on with their daily life. That’s when I learned more about the typical lower lip plate you can see on most women.

This lip plate is now a cultural thing, yet it started back when the Europeans were taking Africans as slaves. Back then, the more beautiful and stronger the slave, the more valuable it was.

The Mursi, to protect themselves, started “uglifying” their faces and bodies with lip plates, earplugs, and scars to lower their “value” to seem unattractive to the Europeans – thus, not getting enslaved.

Girls now begin this lip ornamentation tradition when they are 15 or 16 years old, and increase the size of the clay plate over time. The scars, on the other hand, are a sign of strength. 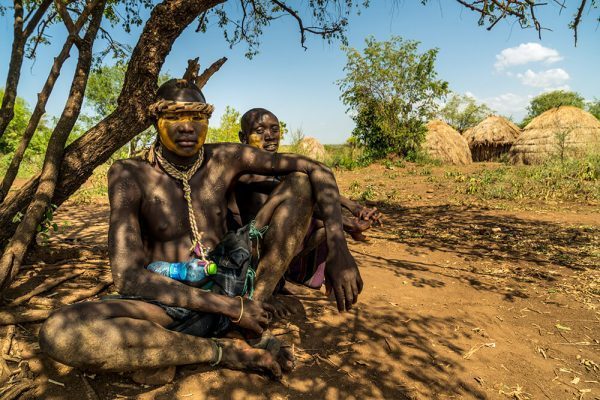 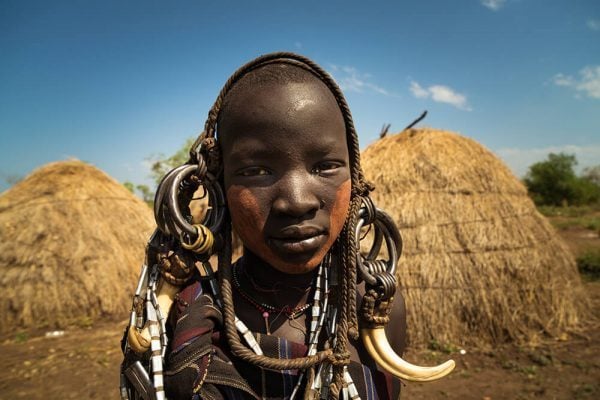 I also learned a bit about how they pay for stuff, aside from the money they get from tourists. The Mursi are pastoralist, so they trade goods with their goats, sheep, and cattle.

For example, getting married can cost them 38 cows, and getting an AK-47 cost around five cows (which is very expensive for them).

I photographed a girl with an AK-47, who I learned is one of the most respected members of her village. The AK-47 has now replaced the spear, and owning an AK brings her respect because her family feels safe with her.

If she had no AK, she would be looked down upon, and her family would look for safety with someone else.

It sounds harsh, but I guess tribal life must not be easy.

I had a bit of a funny moment when I visited the Karo tribe, which is also in a remote area past Omorate – just by the banks of the Omo River. The Karo are not aggressive like the Mursi, but as with the Mursi, I first did my first sightseeing round and interactions with no camera. 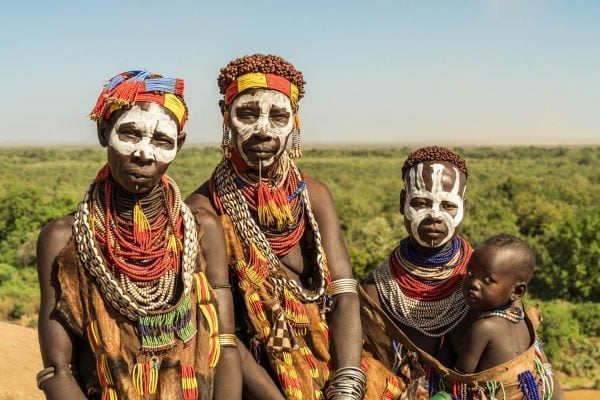 The thatched huts were slightly different in style from the Mursi, but were built with the same materials – grass that’s cut at the end of the wet season, sticks, coarse planks, and mud plaster. The Karo tribe has a central “courtyard” that serves sort of as their “courthouse.”

There, when someone needs to be punished for some wrongdoing, they get penalized by sacrificing three goats, or a cow, or whatever living possession they have – according to their punishment.

Like with the Mursi, the Karo also use their livestock as currency, so this is how they pay their fine.

Also interesting to see was how the Karo decorate their bodies with red ochre and white chalk to create intricate designs on their faces and bodies – all painted by hand or with wood sticks.

The paintings are done to celebrate special moments, like a wedding, death, change of seasons, harvesting, and more. It’s also used as a way to be more visually appealing and attractive to the opposite sex. And on the other hand, it is also used to look intimidating to rival tribes.

These days, though, they paint themselves more often as they know visitors like seeing this tradition and photographing them. 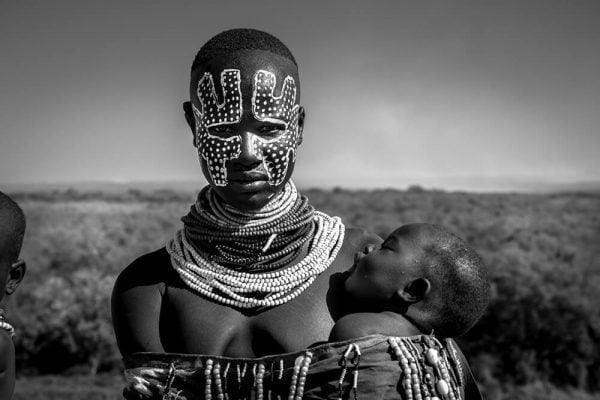 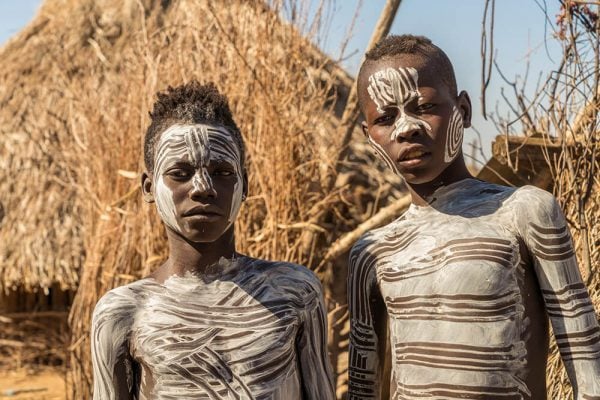 After I finished looking around the village, I asked one of the tribe members (who spoke decent English) where was Debebe. He pointed towards the river, so I followed that way.

As I walked towards my guide, I saw him sitting on the upper edge of the river valley, facing the river, with most of the tribe standing close to him from behind, facing the same direction. I wondered what they were looking at, but didn’t pay much attention to it.

Just as I got about three steps away from him, a loud BANG! echoed through the valley. I jumped like a gazelle and froze, trying to figure out what just happened. (Below is an almost accurate representation of this moment.)

Turns out my guide was hunting an animal with one of the local’s rifle, and everyone was spectating. Fortunately, he didn’t hit the animal, but unfortunately for me, the entire tribe saw my reaction and started laughing at me.

For a split second I felt embarrassed, then I started laughing with them – even though I knew they were laughing at me, not with me.

After that, I became “the funny guy, ” and they took a liking to me. Since I was “the funny guy,” one of the locals decided to paint me like a Karo. They don’t always paint “farangis,” but I guess they needed to mark the “special,” funny moment.

The Hamer: A Tribal Blend

Unlike the Karo and Mursi, the Hamer are much more accessible, and in a way, much more “blended” with the western world culture. Still, they manage to conserve a rich, unique culture that makes them stand out from most tribes.

Since their market day happened when I was in the area, I decided to spend more time at the market in Dimeka instead of their village.

Remember I was body painted by the Karo Tribe? Well, I still had most of the paint on my body, so as I walked the market I noticed how the Hamer were as intrigued of seeing a “Karo farangi” as I was amazed of their customs.

Thankfully, the Karo and Hamer are not enemy tribes – what would have happened if they were?!

Some of them looked at me, all painted, and laughed. Others mimicked dancing moves while pointing at me (later I was told they thought I was going to dance for them).

Others were a bit bolder and tried to make a conversation to know more about my current look. Unfortunately, the conversation never went further than a few body language gestures as both sides were lost in translation.

As I walked the market, I crossed paths a few times with one Hamer lady, and every time she saw me, she yelled “KARO!,” with a big smile. After a while, she asked me “what’s your name?,” and “how are you?,” which was most of what she knew in English.

I replied and followed the conversation with mimics. Her name is Aito, and she is now my favorite Hamer!

Through her, I learned about their ochred colored hair, which is dyed with clay to keep with their tradition and give it the soft texture it has. I also learned about the beads and puka shells on their goatskin dresses, which are traded with livestock with Kenyan tribes.

And, how the first wife (they are polygamist and have up to 10 wives) wear a unique collar as a “wedding ring,” among other details.

These are just a few of those special moments that made my time in the Omo Valle one of the most memorable travel experiences in Ethiopia. It’s a shame I didn’t have too much time there, but I know I will go back in the future to see more of them.

Below is a short video with some clips taken at the tribes and around Ethiopia. Also, if you’re looking to visit the tribes in the Omo Valley and have similar experiences, I share everything I know about visiting the region on a budget in this post. 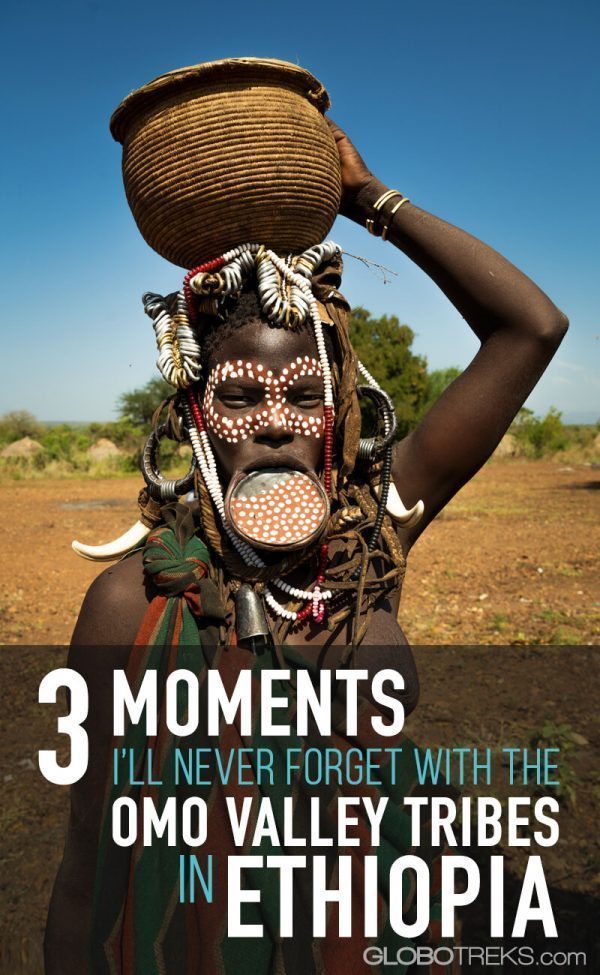