But, most travelers who visit Egypt seem to skip that one last check.  Nothing wrong with skipping it, but it is important to know that Egypt is not just the grandeur of its imperial past.

While various degrees of poverty can be seen around the streets of Cairo, even many locals seem to turn their faces when you mention one place in particular: Manshiyat Naser, or commonly known as Garbage City. 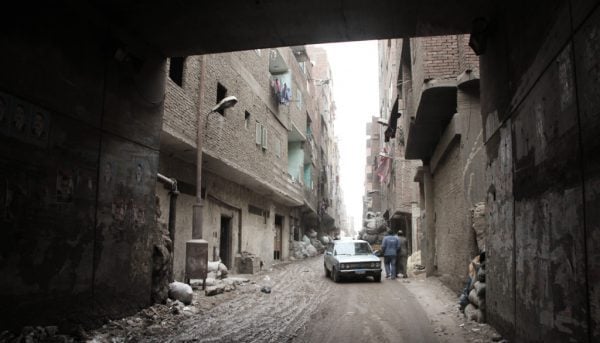 Garbage City is a slum settlement at the base of Mokattam Hill on the outskirts of Cairo and inhabited by the Coptic Christians.  This was the first place I got to experience out of all Cairo.  Right after I arrived in Egypt, I managed to meet with Jaime, Breakaway Backpacker, and we both agreed that we had to see Garbage City.  And so we did. 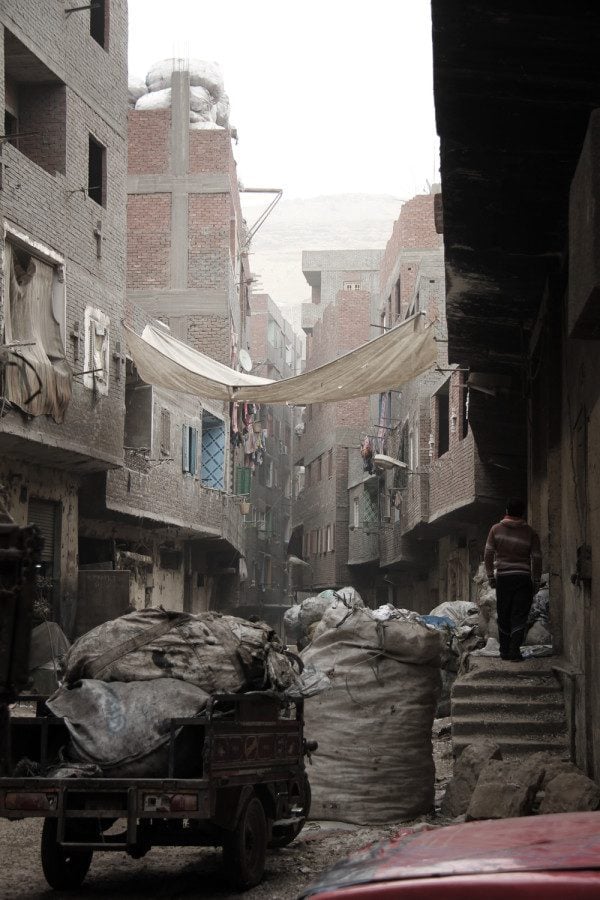 I’m not sure if this is good or bad for the slum, but the slum’s current condition is as such due to the fact that the whole city of Cairo dumps its trash at Garbage City.  On one part, why is Cairo dumping all its trash in a “city”?

But on the other hand, maybe that trash is a “blessing” for the slum since they’ve been able to generate an economy out of the collection and recycling of garbage. 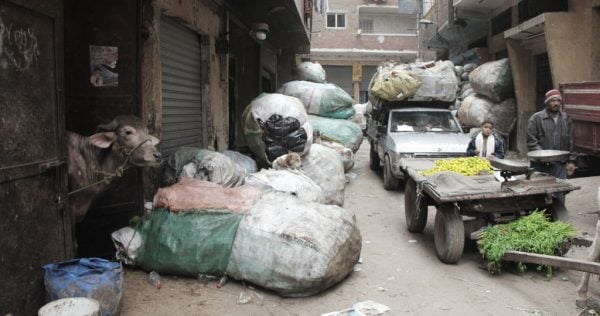 Walking through the dirt streets gave us nothing but the crude reality of life in the slum.  The smell of rotten food and decomposition floated all throughout the city and engulfed us as soon as we stepped in.

The dirt roads overflowed with stagnant water at some points, a visible sign that this slum lacks infrastructure and often has no running water, sewage, or electricity.

In other parts where the dirt roads were dry, they simply were full of huge bags of garbage or simply garbage sprinkled all around.  Animals like cows, goats, and dogs live inside buildings and on the streets, surviving out of edible garbage. 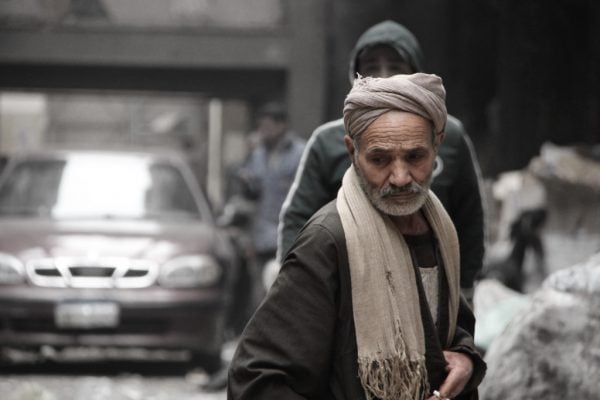 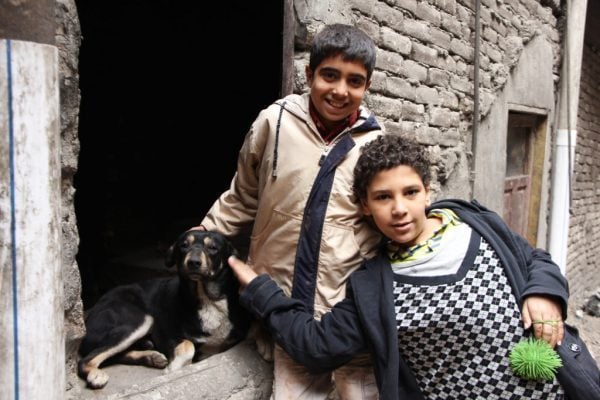 While poverty was what surrounded us 360 degrees, we had the opportunity to see a few friendly faces that were kind enough to chat with us for a while.  Among those, two kids that were playing around (in the picture).

There wasn’t much of a conversation as they spoke barely any English, and we didn’t speak Arabic, but the few words, combined with body language made for a nice “exchange” between the four of us. 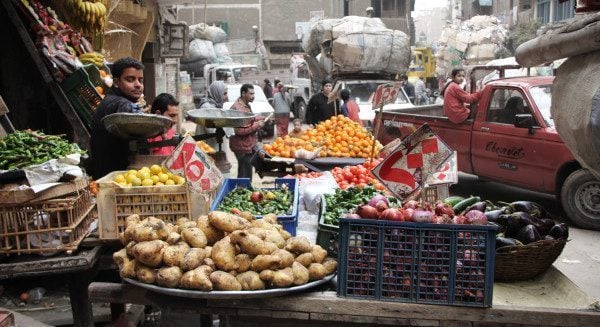 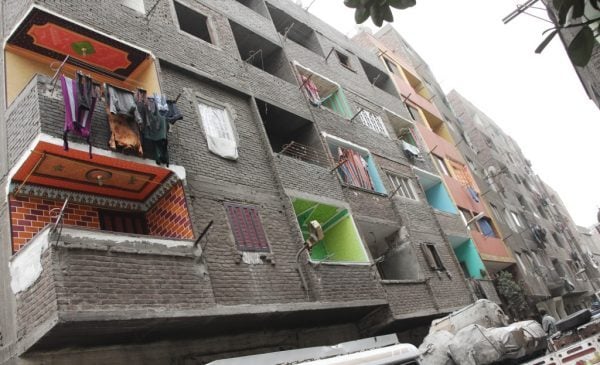 Vibrant colors can also be spotted around the gray and dusty environment.  Fruits, pastries, and candies are sold on the streets as in any other city.  It’s interesting how each living unit paints their balcony as a way to show their uniqueness and their place in the city, or just to show some artistic expression.

While walking the chaotic streets of Garbage City, we got to understand in a small degree how their economy moves.  Families specialize in a particular type of garbage and they are in charge of collecting, piling, and recycling as much as possible of that garbage.

Rooms were full of men, women, and children that would go through the trash sorting is out as sellable or unsellable.  We saw how they shredded tons of plastic bags and how they piled aluminum cans and plastic bottles to sell as raw material. 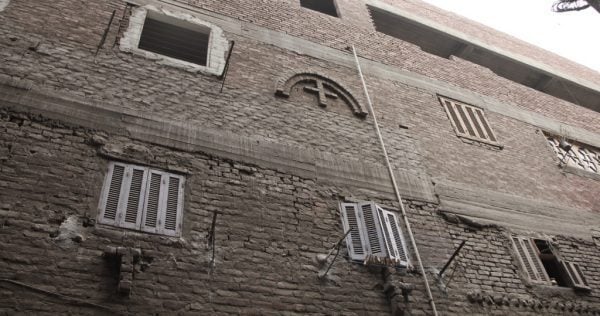 Outside of the economic logistics, there were a few interesting features that stood out.  While minute in size, I found interesting how you could see the Christian cross built with bricks right on the façade of many buildings.  A sign that this place is indeed Christian, and even though the Muslim population has grown in the past few years, it will always be identified as a Christian slum. 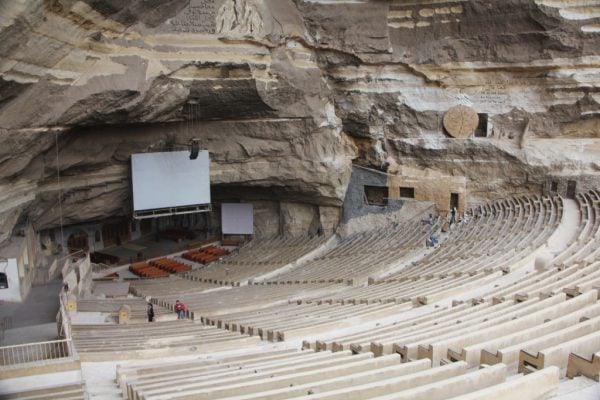 Another even more interesting feature is the Cave Christian Church hidden somewhere behind the chaos that rules the city. The Cave Cathedral or St. Sama’ans Church, is considered to be the largest church in the Middle East, with seating for up to 15,000 people.

While I wouldn’t describe the church as beautiful, I would describe it as something interesting and extraordinary.

Coptic Christians found a way and a place to praise God, even if it meant carving and fitting a church in one side of the mountain.  Religious images that reference the bible were carved on various places of the cave walls.  This is a fully functional church, and the Coptic Christians guard it with much effort.

Getting to Garbage City is not hard, but is not easy either. The best way to visit it is by hiring a taxi that would take you, wait for you there, and take you back. As I mentioned before, no one goes there, so many taxi drivers will have no idea how to get there.

Our taxi driver had a hard time getting there, but after asking for directions a few times, we got there.  We paid 80 Egyptian pounds between the both of us (about $13), including a tip for our driver who was amazing and patient with us.

Garbage City might not have the glory of Egypt’s past and of its monuments, but it is a place I recommend everyone to visit as it shows a face no one cares to see, but that is very ever present not only in Cairo but in many parts of the world.