I’m sure that many of you have dreamed of seeing The Great Pyramids of Giza, and once there, you felt like it was a dream come true. Having studied Egyptian Architecture, and thanks to my love for Egyptian history, I had that same dream.  And well, recently it became true, but not how I had envisioned it.

The Pyramids of Giza were the first ancient Egyptian building I got to see in person.  They were my real-life introduction to the Old Kingdom. Once I got there, I couldn’t wait to get in and start marveling on these massive funerary structures.

The Pyramids of Giza were built by the Pharaohs Khufu, Khafre, and Menkaure (Biggest, medium, and smaller pyramid, respectively from left to right in the picture below – father, son, and grandson, also respectively). 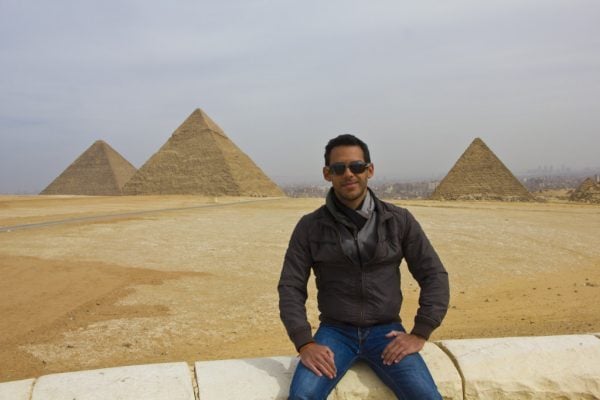 Egyptologists believe that Khufu’s pyramid was built as a tomb and it took around 20 years to build, concluding around 2560 BC.  The pyramids of Khafre and Menkaure followed between 2520 and 2472 BC.

It was early, still quite chilly on a February morning.  The sun was high.  Shining but not warming.  Khufu’s pyramid stones played with the sunlight by creating shadows that distinguished each step, stone by stone. 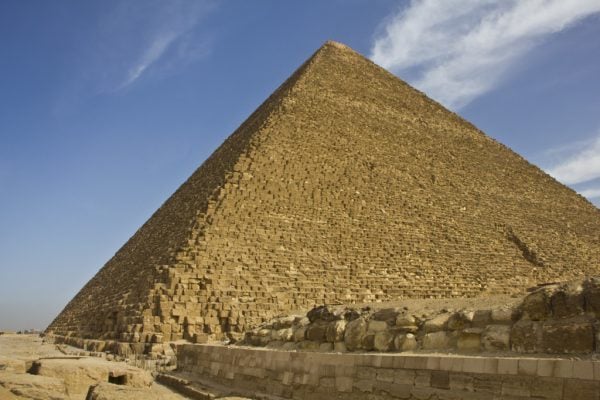 Originally the pyramids didn’t look this way.  They had a smooth casting stone surface that covered the stones we see today – much like we see on the top of Khafre’s pyramid.   The top and the base were painted and decorated with hieroglyphs.  On the very top, there was a metal tip (probably gold) that glistened under the sun, making the pyramids visible for miles and miles – and making them a target for looters too.

There’s one rule every guide will tell you when you visit Giza; “No matter what, ignore the vendors.  Don’t even make eye contact.”  And this I did.  The tactic worked smoothly, until this one vendor, who I’ll call Khalid, approached me intently while I was taking pictures of Khufu’s pyramid. 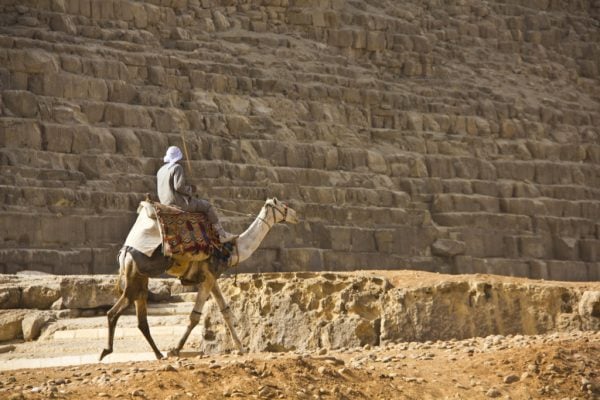 At that point, I had to break my silence and asked him to back off.  He wouldn’t.  He got closer to me and starts patting his merchandise on my chest, saying it was free.

That annoyed me, so I shouted him to back off.

Huh, it worked!  He backed off immediately.  About five minutes later I realized why he backed up so easily.  He had stolen my iPod.  What I didn’t notice at the time was that while he was pushing his merchandise on my chest, he was pushing his hand in my jacket pocket to steal the iPod.

I went back to the rear part of Khufu’s pyramid, where the incident happened and hunted Khalid down.  He was nowhere to be seen.  With my guide, I alerted the police and let them know about the incident.  Turns out that one of Giza’s security guard had seen the incident as it happened, live and in Technicolor.

But, I forgot one thing, I was in Egypt, and like it or not, most people you come across in touristic places are highly crooked.  It’s all about milking the tourist.

The police found Khalid and searched him, without my presence… hmmm.  As soon as I was notified of this, I knew my iPod would never be found.  Either Khalid stashed it somewhere safe or passed it to one of his accomplices, or the police made a deal with him (highly probable) in order to let him keep the iPod.   I lean for the latter, but I’ll never know.

With no hopes of finding my iPod at the “scene of the crime”, I’m sent to the nearest police station to make a police report.  I had two options, either do a regular report or do an accusation.

I wanted to make an accusation (and the police “wanted” me to do that one, at first).  At the end of filling all the forms (written in English and translated by them into Arabic), the police gathered and started discussing “something” in Arabic, of course.

After maybe ten minutes of discussion, the story changed…  They don’t want me to do an accusation; they want me to do a regular report and claim, “I lost my iPod”.  WTF?!!  I wasn’t willing to do that.

“Hello?! Didn’t one of you guys see the theft happening?! How on earth do you expect me to take the blame?!”

The police didn’t want to help any more on the matter, and they were only willing to do a regular report with me taking the fault.  I definitely knew my iPod was never to be seen again, so I didn’t bother.  Well, I did the silly, let-me-waste-my-time-report just for insurance purposes.

The report was in Arabic… great!  My insurance won’t accept that.

After spending a whole morning in this situation, I went back to Giza to finish seeing Khafre and Menkaure’s pyramids, and the Sphinx.  During the rest of my visit I was kind of bummed and slightly pissed.

No one came close to me for the rest of the day, except for this one guy who wanted to scam me of my entrance ticket at the Sphinx.  He didn’t know I was a ticking time bomb and that I had so much rage as potential energy that would snap at any moment. 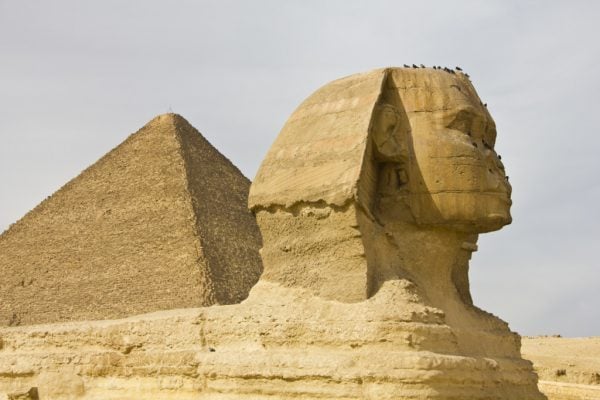 The guy took my ticket off my hand (he’s not an official worker).  I asked kindly, but in a serious tone, to get my ticket back.  He ignored me.  Oh no, he did the two things that piss me off the most: getting ignored and being fooled/scammed.

BOOM!!  My rage fell on him, with absolutely no compassion…  I didn’t get physical, but I was strong verbally, had no filter, and told him how people like him are the worst thing that could happen to Egypt.  How they ruin people’s experiences by trying to milk money out of them.

How they’re ruining themselves by treating visitors like if they’re only cash cows.  How they should learn to treat tourist to feel welcomed in their country and not hassle them, especially now that the country is in a shit-hole.

Not a word back… he wasn’t expecting all that.  I ripped my ticket off his hand and left.  I had had enough of Giza.

Obviously, my visit was not the typical Giza visit.  I admit I did not enjoy it at all, though I still consider the pyramids as must-see sight while in Egypt.  Ancient Egyptian history is always interesting, no matter what.

Next time, I’ll be more careful and won’t allow anyone get close to me. Yes, there will be a next time for me at the pyramids.

Tip: Pockets closed all the time, ignore all sellers, and keep them at a distance if they intend to approach you.

Have you had any bad experience at a touristy site?