Prague might be the perfect city for you to visit if you’re an architectural buff and bohemian style lover, but did you know that you could also feed your astronomical “geekness” when you visit Prague?

Prague is the proud host of Prague Orloj, or Prague Astronomical Clock.  This is a medieval astronomical clock that is considered to be the third oldest in the world and the oldest one still working.

In theory, the Orloj can be considered as a medieval planetarium, displaying the current state of the universe with extreme accuracy. 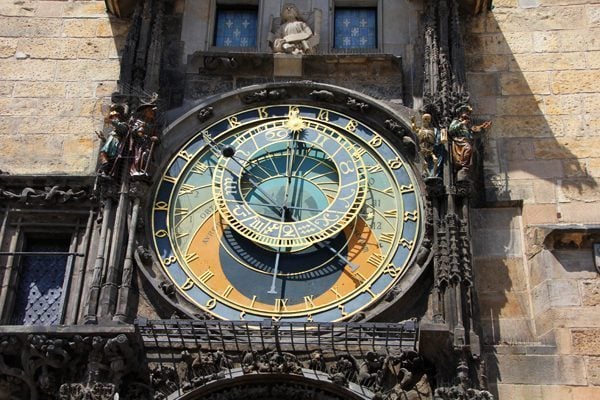 But, what makes this clock so famous?

Well, it is the combination of beautiful design with the “mechanical show” it provides every hour. Crowds gather below the clock, even 15 minutes before the hour, to be able to see the clock in action.

So, let me give you a brief explanation of what the clock is… and some history along the way.

When looking at the clock you’ll see three main mechanisms, which are: the astronomical dial, a calendar with medallions, and “The Walk of the Apostles”.

The astronomical dial is located on the top. It shows the position of the sun and moon, the zodiacal ring, the old Czech time scale to indicate the time of sunset, and other astronomical details.

The calendar with medallions is located below, representing the months. And “The Walk of the Apostles” shows figures of the apostles at the hour, every hour, as well as the figure of death represented as a skeleton. 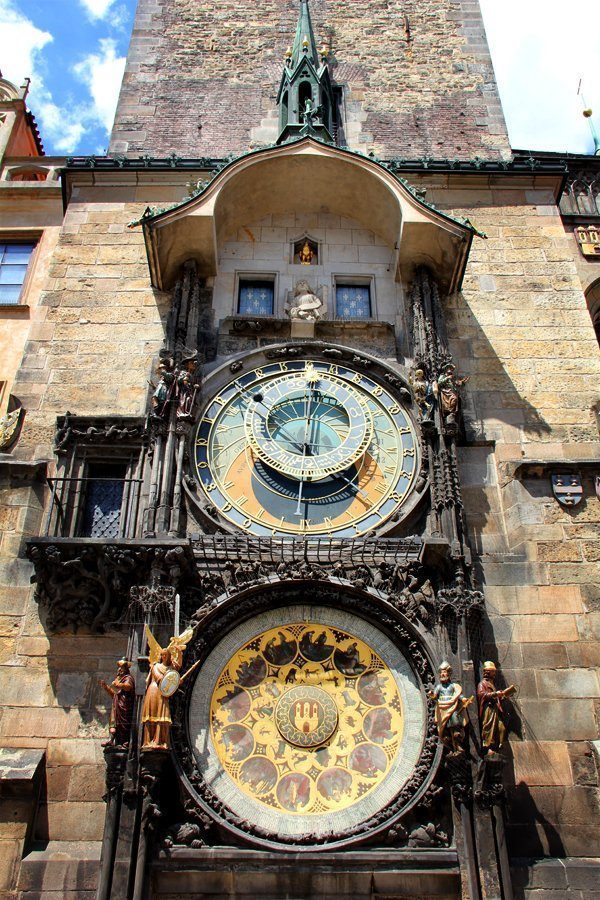 The clock was installed in the southern wall of the Old Town City Hall in 1410.  (When looking for it, you will not be able to see it from the Town Square; you have to go on the left side of the City Hall to see the clock)

One of the interesting things about the clock is that the entire composition and mechanism see today wasn’t fully installed in the original conception.  They were added progressively.

The mechanical clock and astronomical dial were originally installed in 1410 and they were designed by clockmaker Mikuláš of Kadaň and mathematician Jan Šindel.

The craftsman Hanus Carolinum, originally accredited with the creation of the Orloj, actually only did some repairs in 1490 and during these repairs, he added the calendar dial under the astronomical dial.

In addition, the Vladislav Gothic (Czech Republic’s version of Flamboyant gothic) sculptures and decorations we see today around the clock were added.

According to the legend, the Old Town councilors blinded Hanus with a hot poker so that he could not recreate another similar clock in any other city (as not to overshadow the beauty and fame of this one).

And, before he died, Hanus climbed the tower of the clock (blind) and took revenge by breaking the mechanism so bad that no one could repair it.  Supposedly, over decades people died trying or they went mad.  Hmmm… 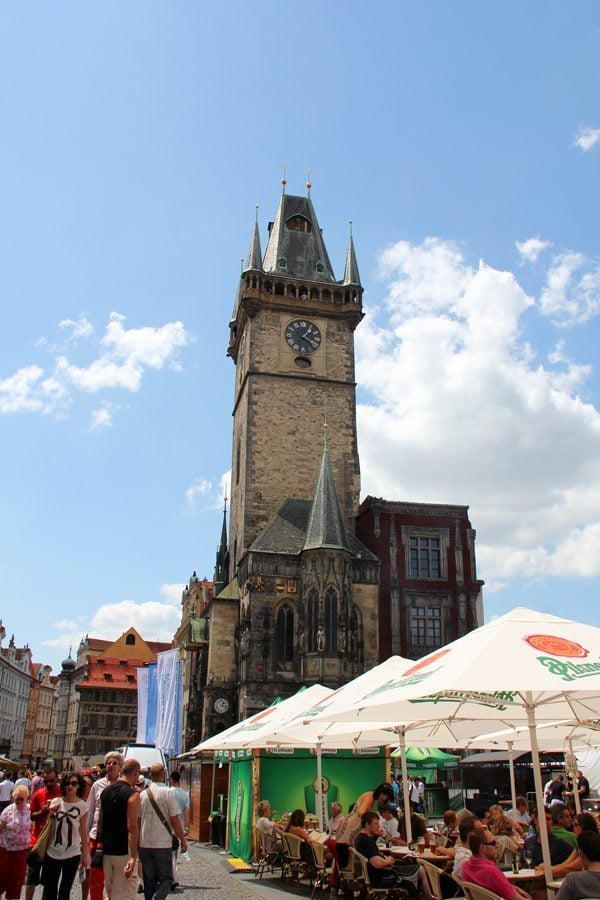 Of course, while it is the oldest functioning astronomical clock, the Prague Orloj had several breakdowns and malfunctions throughout the course of its history.

Among the most notable “malfunction moments” were in 1787 and 1861, when the clock was almost sold to scrap because there was no money to repair it, and during the Prague Uprising on May 8, 1945, when Germans fired towards the southwest façade of the Old Town Square.

The City Hall suffered serious fire damage, including the burning of the wooden sculptures and calendar dial face of the clock.  The clock stood motionless for three years until in 1948 Vojtěch Sucharda repaired the machinery and restored the wooden apostles.

Still, to this day the clock is working flawlessly (of course, after many repairs). But, why keep this astronomical clock alive?

Well, not only it is a beautiful piece of art and machinery, but according to another legend, the skeleton (you can see it on the image to the right) has the power of foretelling the future and says that the city will “suffer if the clock is damaged for a long time”.

I think that’s enough encouragement for me to keep the clock running!  I wouldn’t want beautiful Prague to suffer!

Have you seen the Orloj? What did you think of it?