Easter Island is famous for its mysterious background and the Moai statues that accompany it.

A plethora of theories surround the origins and construction of these giant, monolithic stone statues, but the truth is that they are the legacy left behind by the Rapa Nui civilization that once inhabited the island.

While the moai statues are the most popular attractions on Easter Island, the truth is that there is much more to do in this tiny remote island in the middle of the Pacific.

Though, I’d have to say that many of these other things to do on Easter Island may be somewhat related to Moais still.

Hey, with 887 of these statues, the moai are all over the island!

Where is Easter Island?

Even though Easter Island is part of Chile, it is located deep in the Pacific Ocean, about 3,500 km west of the Chilean coast.

The nearest inhabited island is Pitcairn Island, which is 2,075km away. But, even though Easter Island is one of the remotest islands in the world, thankfully, it is not as hard to reach. 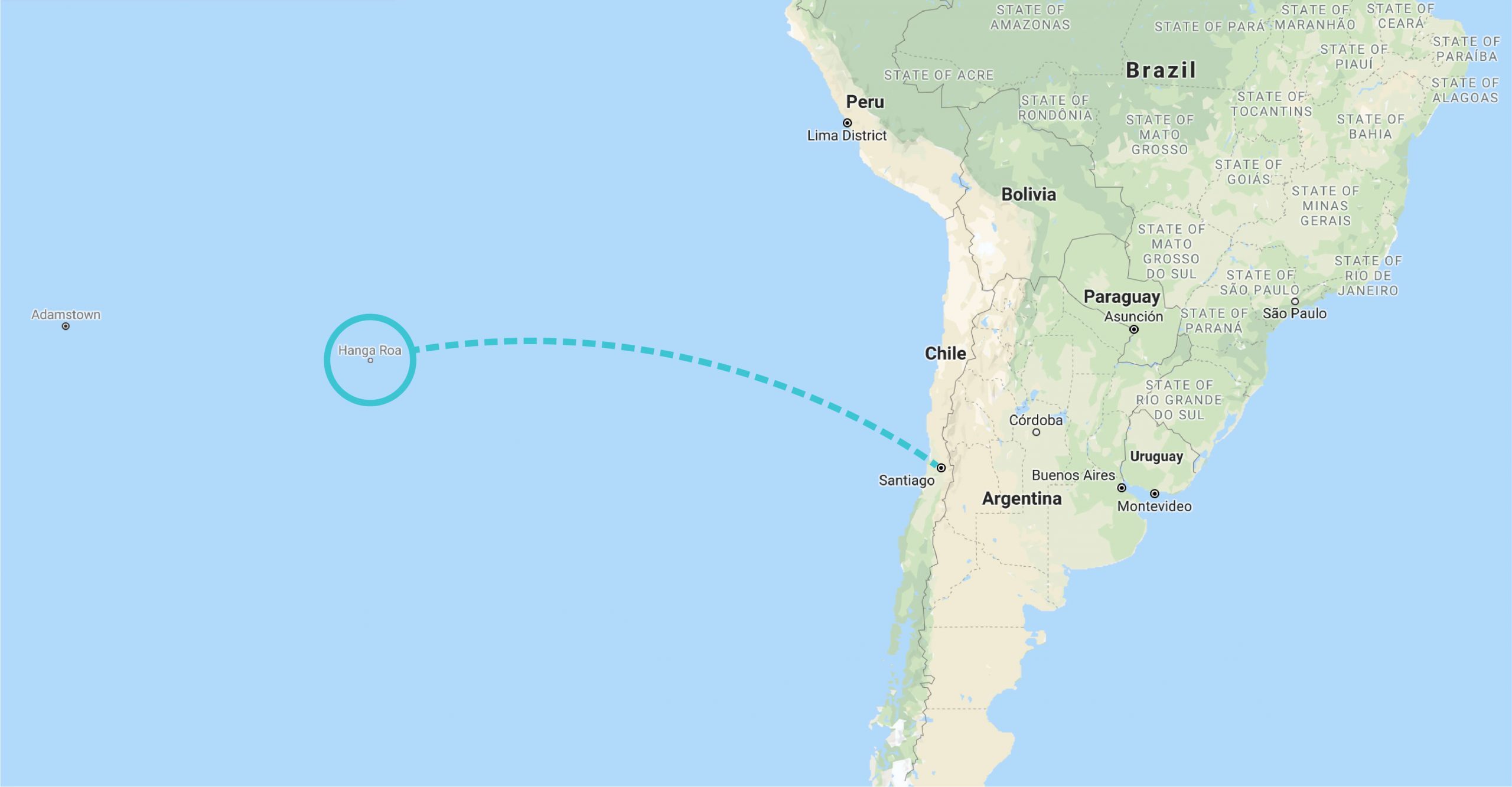 How do you get to Easter Island?

Currently, LATAM is the only airline that flies to Easter Island from Santiago, Chile or Tahiti. So your best (and cheapest option) would be to fly to Santiago and from there jump to Easter Island.

Depending on when you go, expect to pay anything from $300 to $1,200 for a round trip flight between Santiago and Easter Island.

That flight takes around five and a half hours each way.

On this other post, I share a lot more tips on how to travel to Easter Island on a budget.

Now, without further ado, let’s dig into the best things to do in Easter Island!

This is the main attraction on Easter Island and the one place you shouldn’t miss.

This was the main moai quarry and the place where you’ll see them in all their glory and in all stages of production. In fact, about half of the moai of Easter Island are located in this national park.

The Moai are monolithic human statues carved between 1,250 and 1500 AD and are considered to be the “living faces” of deified ancestors. They look inland towards the clan that created them as a sign of protection. 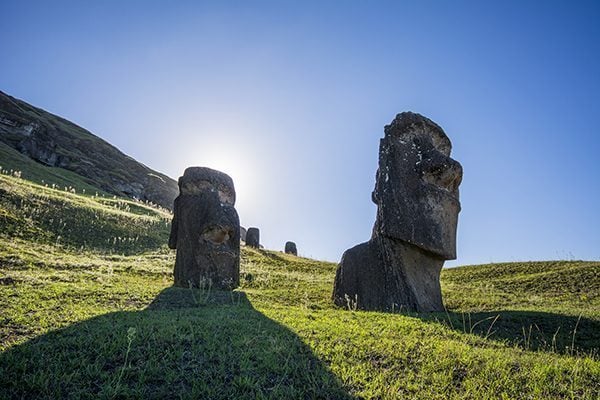 Here in Rano Raraku, you’ll see all shapes, expressions, and even some evolution of the carving craft between the early and latest Moais produced.

If you’re not planning on driving there, then I recommend going to Rano Raraku with this highly reviewed tour.

2. Watch The Sunrise From Tongariki

Seriously, do not miss this! Tongariki is one of the most iconic sights on Easter Island, so I’m sure you must have seen it by now in countless pictures and tv shows.

Here you’ll see its 15 moai statues stand next to each other on an Ahu (ceremonial platform) facing inland as you see the orange sun rise right behind them, creating a shadowy silhouette out of the statues.

Interesting enough is that the sunrise on Easter Island is quite late. When I was there in April, sunrise happened around 8:30 am!

If you can’t get there on your own, then I recommend doing this quick tour that takes you to Tongariki to see the Sunrise. It’s worth it!

As you’ll see soon, sunrises and sunsets are among the best things to do on Easter Island. 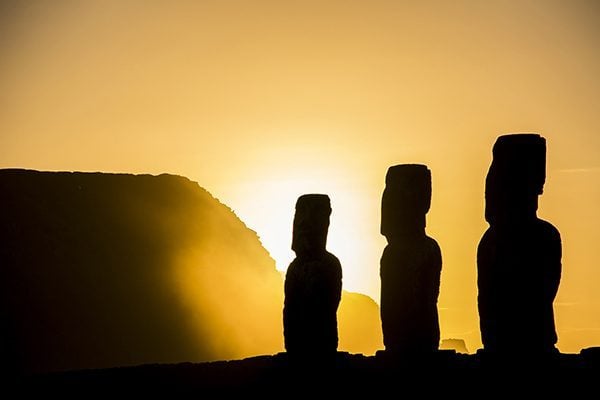 Ah, something that is not moai driven! Well, while it is not, it still has Moais in it! Ha! According to oral tradition, Anakena served as the first settlement on the island.

Anyway, Anakena is one of the best beaches on the island, and it is easily accessible. It is a small beach, but that doesn’t matter since there aren’t a lot of people on Easter Island.

You’re your time to relax in its white sandy shore and swim in its crystalline waters. While slightly colder than I like, it was still a relaxing and enjoyable swim.

This full-day tour to Anakena is also worth checking out to experience the beautiful, dramatic scenery of a few of the highlights of Easter Island.

4. Bike Around The Island

This was probably my favorite activity there. Easter Island is small, and I mean, really small! You can bike the entire island in a day and still have time to stop and enjoy many of its sights.

While there are some slight uphills here and there, I believe it is more of a leisure bike than an intense workout.

You can bike from Hanga Roa (the town) to Anakena, Tongariki, Rano Raraku, and pretty much every place accessible by road and trails. Bike rentals go around $13 per day. 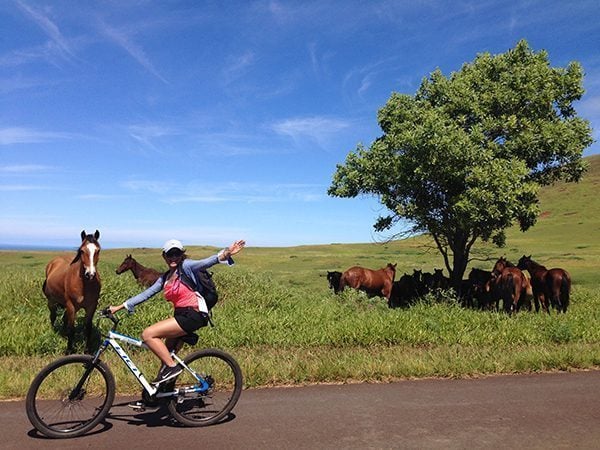 Remember I mentioned there was an ancient Rapa Nui civilization on Easter Island? In addition to creating the impressive Moai statues, they left a legacy of written history in the form of pictorial petroglyphs.

While not a vast legacy, there are still traces of Rapa Nui petroglyphs all around the island, with some of the most important ones found in Papa Vaka, Ana Kai Tangata, and Orongo.

These petroglyphs often depict several marine scenes that include fishing, the use of canoes, and various marine animals. Part of the daily life of the Rapa Nui. 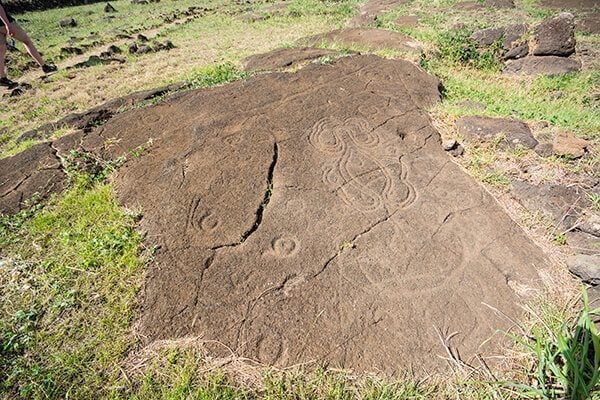 6. Hike To The Top Of Terevaka

Here’s the thing, Easter Island doesn’t have mountains, they are more like pronounced volcanic hills. Still, it is fun to hike these volcanoes, even if the highest one, Terevaka Volcano, is only 507 meters above sea level.

Being the highest point on the island, from there you can get a perfect 360-degree view of all Easter Island.

Another great place for a panoramic view of the city is from the top of the Ranu Kau volcanic caldera in Orongo.

In addition to seeing the entire island from there, you’ll also see the remnants of the stone village and ceremonial center of the ancient Rapa Nui.

7. Watch The Sunset From Tahai

This is one of my favorite Easter Island sights.

Tahai is the “it” place to watch the sunset, and the best thing is that it is located right at the edge of Hanga Roa – the town.

Here, you’ll see five moai standing on an Ahu, with the sea located right behind it, giving it a perfect picture worthy setting when the sun sets on the horizon.

Beyond seeing the sunset, don’t miss the opportunity of stargazing on Easter Island. There’s virtually no pollution there, so the starry sky in the background with the impressing moais in the foreground looks mesmerizing! 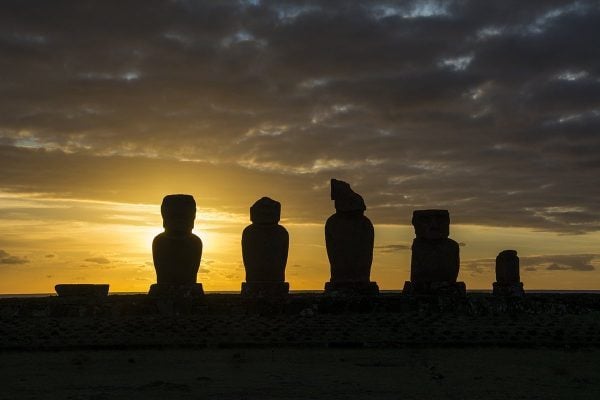 8. Watch A Dancing Show At Vaitemiki

Locals still speak Rapa Nui and practice some of the traditional aspects of its culture, like dance (even if it doesn’t happen anymore outside of shows and special occasions.

To see a traditional Rapa Nui dancing show, you can head to Vaitemiki, located in Hanga Roa. They offer free shows on Mondays, Thursdays, and Saturdays (at the time of writing).

There are other shows that include dinner (for an entrance fee), but you should ask around for current locations and times.

9. Visit The Lesser-Known Caves In The Island

If you’re done with the moais and don’t know what to do on Easter Island, then I recommend going underground.

What most people don’t know is that Easter Island has a decent network of caves, and some of them can be visited on your own.

While some of them can be hard to find, others are easily accessible and excellent points to learn more about the island, its people, and nature.

Ana Kakenga is one cave from where you can watch the sunset since it is located right at the edge of the island and has an opening looking towards the sea.

10. Don’t forget to get your Easter Island stamp!

While Easter Island is a territory of Chile, meaning you don’t get stamped at the airport if you fly from Santiago, you can still get an Easter Island stamp if you visit the post office in town. Don’t miss having a cute Moai stamp in your passport! 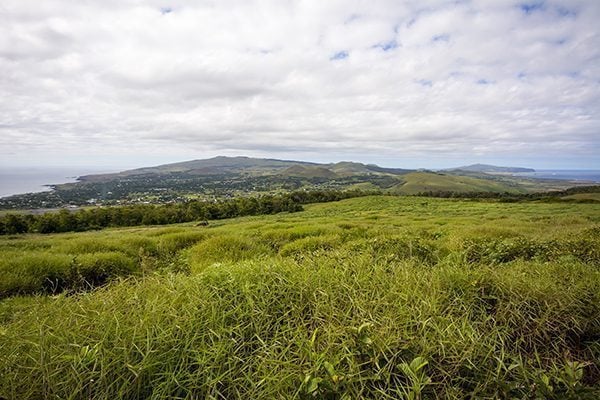 Such a small island yet so much to do! Make sure you have enough days there to not miss on any of these activities. I spent five days there, and I wish I had a few more.

Easter Island is often thought to be really expensive to visit, but it can be done quite cheap -as I found out- and I share here how I traveled there with less than $50 a day.

Lastly, there are also more activities not mentioned here that you can do with one of these recommended tours. 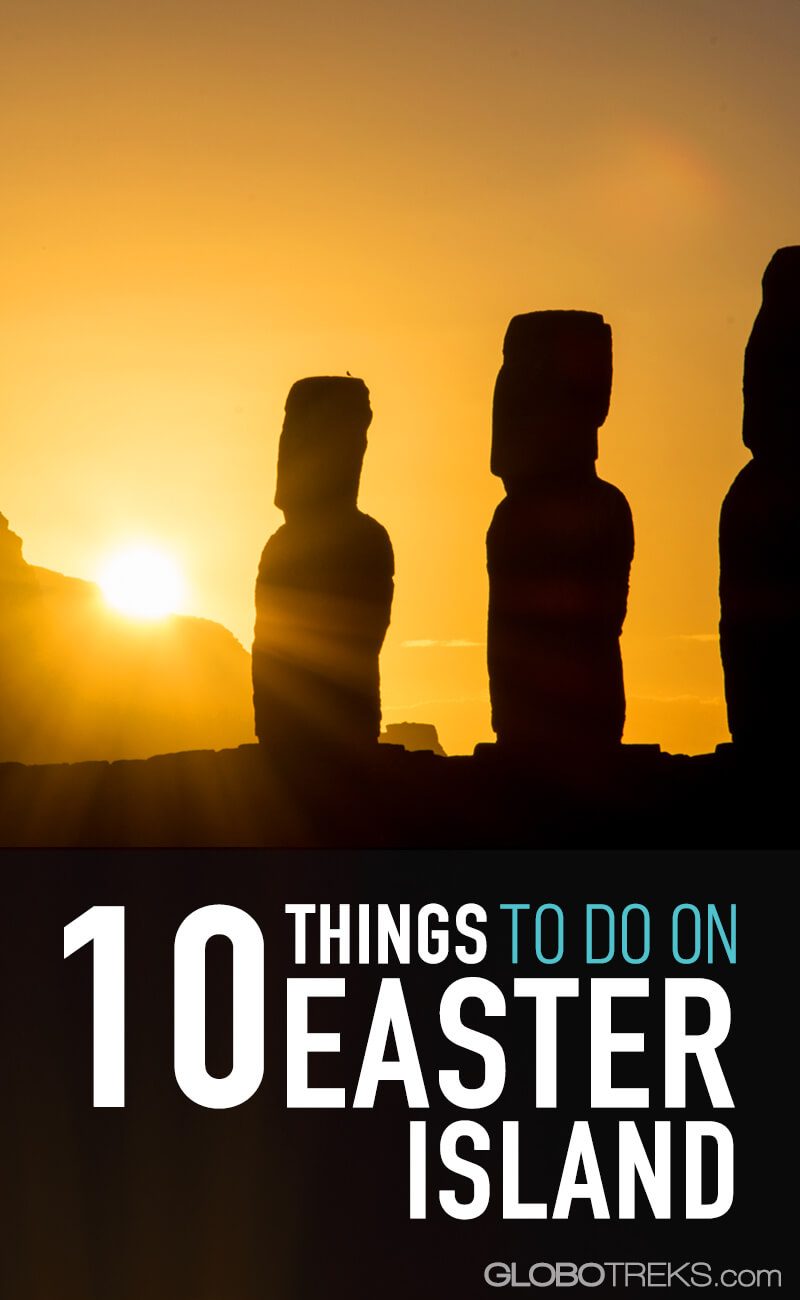