I have a weak point when it comes to adventurous activities. I mean, I HAVE to do them!

But, when you combine adventure with interesting architecture/engineering, you have a winning combo for me! (Among many other adventure related combos I love)

Sydney Harbour, which I dare say is the most beautiful harbor I’ve seen to date, has one of the most impressive steel through arch bridges in the world – the Sydney Harbour Bridge.

As you might imagine, climbing the bridge is one of the most popular activities in Sydney and I didn’t want to miss out on it.

I contacted BridgeClimb Sydney to express my interest in covering my experience on the blog, for which they offered a complimentary climb in exchange. 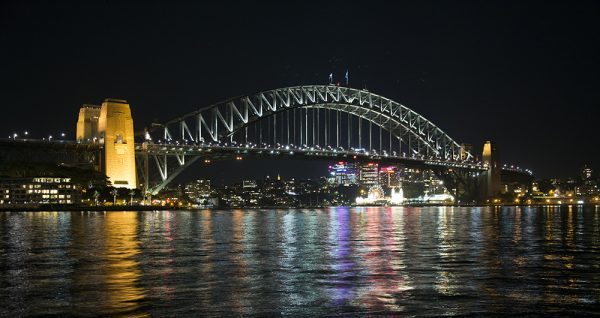 The Prep to Climb the Sydney Harbour Bridge

I booked my climb on my last day in Sydney, hoping that it would be a highlight and a good way to end my time in Australia.

The first thing I noticed after I arrived at the Climb Base was their military precision, their professionalism, and attention to detail.

Right after I “checked in”, I was sent upstairs to meet the rest of my group before heading into a room to fill up some information, sign a waiver, and get a Breathalyzer test (yes, people, you need to be sober for this).

This is followed by a “uniform” change and some pre-climb preparations. 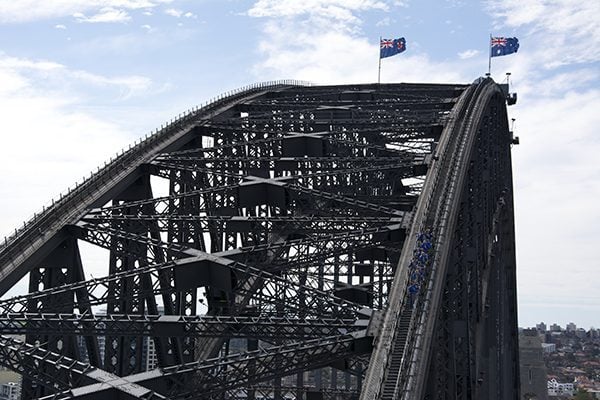 I loved how efficient and precise the preparation was. We all entered this impressive industrial open-space full of climbing equipment.

We were handed a harness each as we walked around a metal ring with some hooks. Turns out that ring and hooks are to facilitate strapping your harness on your own.

Our climb leader, Dean (aka The Climbing Machine), told us how to do everything step by step.  It was easy.

Once we had all our gear, it was time to practice in a small ladder structure. This is to make sure you can go up and down the ladders, latch your harness on and off when required, and most of all, follow directions.

We all shined in our test and were ready to leave the Climb Base. We passed through a short tunnel and harnessed ourselves to the cord that runs the entire length of the climb, so from that moment on, I knew we were ready to go! 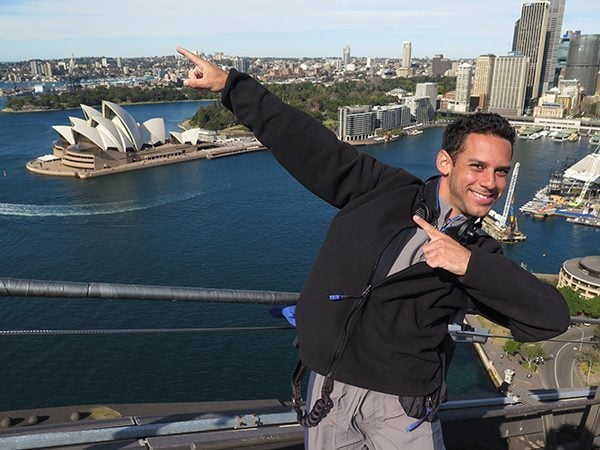 The Bridge, The Climb

As I often do when it comes to structures, I like to learn the history and the technical side behind them. I find that it makes my experience much more interesting and helps me get more out of it.

Warning: Some architectural geeky content ahead. Proceed with caution.

The bridge was opened in 1932 after decades of debate whether to build a bridge or a tunnel to connect both sides of the harbor (today they have both).

I loved this opportunity I had of walking on top of such an interesting bridge from an architectural/engineering point of view.

Back then, bridges were built by merging steel plates with rivets, and this bridge in specific contains 6 million rivets (those are the thousands of dots you see all around the bridge in the image below). 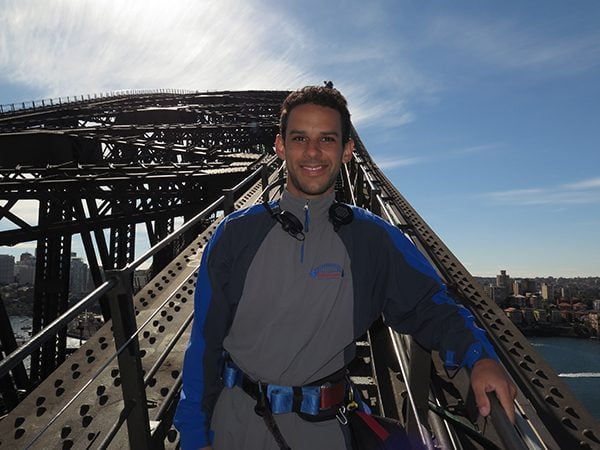 The bridge was built around the same time as the Empire State Building.

I had this vivid image of men walking over the beams of the Empire State Building with no safety net and heating the rivets till they turned red.

They would then throw those rivets like a softball to another guy who would insert them in pre-drilled holes between two plates to be then rounded over by a large pneumatic rivet gun. This image, though, I translated to the bridge.

As we climbed up, Dean gave us a huge amount of insight about the bridge, its history, fun facts, and other details. The climb was more than just a hike up for the view; it was a learning experience on its own.

As we continued our climb, I was quite surprised at how easy the climb is. There are stairs and scaffolds that make it easy for you to hike up.

And if you’re concerned with safety, not only are there handrails all over the course, but you’re also latched quite securely and can will do the entire hike without latching off once.

We did a few photo stops along the way and one of them was about halfway up the bridge, which is around the same height as the Pylon Lookout.

Fun fact: The pylons have absolutely no structural relationship with the bridge. They were actually designed to beautify and give a more prominent presence to the bridge since it seemed to look a bit “simple” without them. I agree they add to the impressiveness of the bridge. 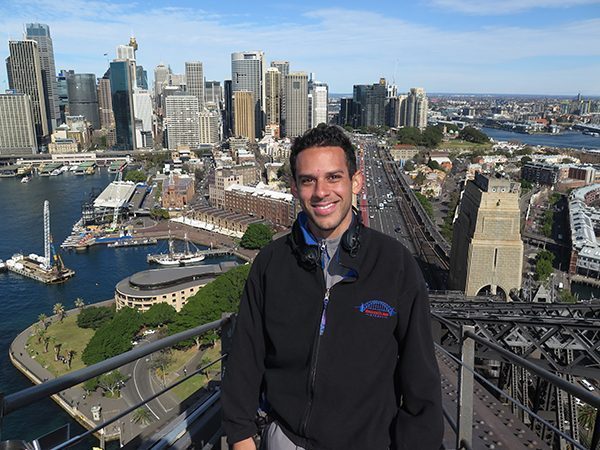 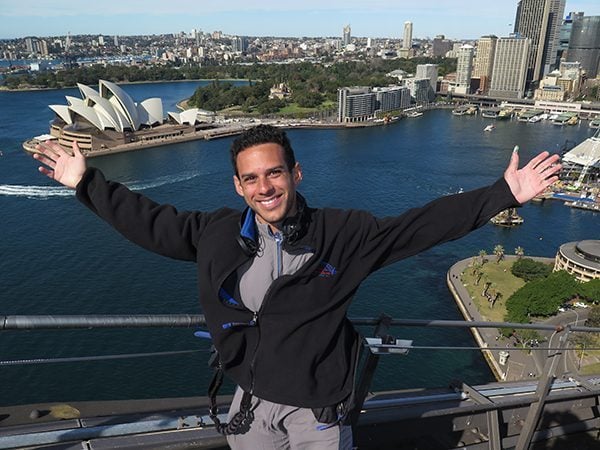 From that point, the view was already impressive. I could see the Sydney Opera House, the city’s skyline, the botanical gardens, the government house, and far along the Sydney Harbour, which by the way, is actually called Port Jackson. Did you know that?

But, as we climbed up, the view kept getting better and better! I was blessed with a sunny, clear day, so the higher I went, the farther I could see.

My sight reached all the way to the cliffs along the coast and Manly Beach on one side, and as far as the Blue Mountains over 50 km away on the other. I wished I had my camera, but you’re not allowed to take anything with you. It’s understandable.

If you happened to drop anything on the bridge, you could cause an accident with the cars passing under you. Also, that’s the reason why you wear funny uniforms; to blend with the bridge. 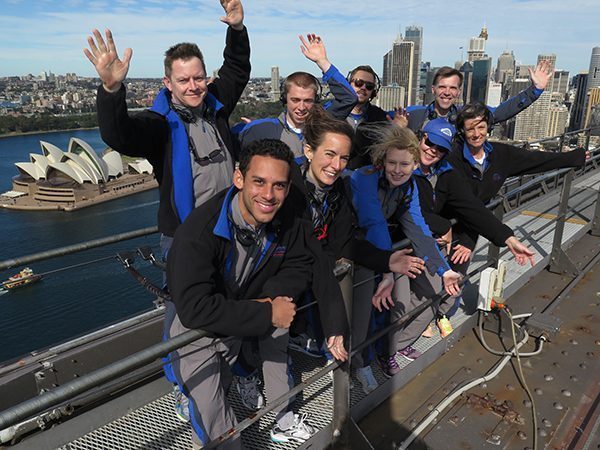 Once at the summit, we spent some time to admire the view, take a few pictures, and simply contemplate the experience. None of us were tired.

It felt more like a leisure walk up than an actual climb. Soon after, we headed down on the opposite side of the bridge until we arrived safely (as expected) to the climb base.

Later that day, I decided to walk around the botanical gardens for my last sunset in Sydney. I wish I could have been up there during that sunset! See how beautiful it was?!

Next time, I’ll do a sunset climb. But for now, I’m happy I checked one more item off my Australia bucket list! 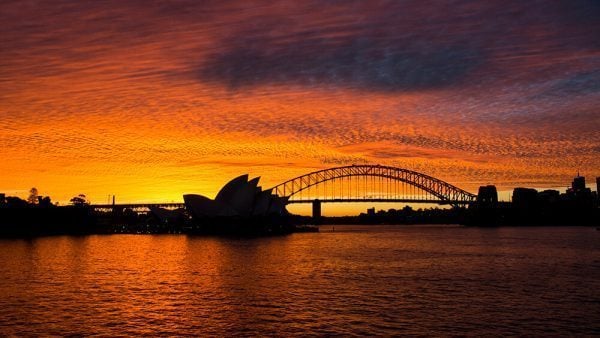 In the end, is the Sydney Harbour Bridge climb worth it?

I’ll be honest by saying that the bridge climb is a very expensive activity, but it is one of those iconic activities you should do if you want to do something unique in Sydney.

While I loved my experience and would do it again, I won’t say you must do it. It will highly depend on how you appreciate activities like this and the cost.

Australia is an expensive country on its own, so naturally, the bridge climb is expensive too. If you want to create a memorable experience in Sydney or are doing a once in a lifetime kind of trip, by all means, I recommend you do it.

If on the other hand, you’re traveling long-term or prefer to be on a budget, then maybe this will not be for you. Just to put it in perspective, the price of the climb could cover the cost of a few weeks in Southeast Asia.

Alternatively, you can see the city from the Pylon Lookouts which are much cheaper (at around $15 AUD).

Or, if you’re looking for free things to do in Sydney, you can get a stunning view of the bridge and part of the city from the Observatory Hill Park.

Personally, I loved the experience and I’m happy to have done it. It is that memorable!

The climb can take up to three hours, depending on your route, so make sure you have eaten before climbing. They have a cafe at the Climb Base.

Climbs are available at dawn, day, twilight, and night. Climbs take place in all kinds of weather except for electrical storms or very strong winds.

You will go under a Breathalyzer test before the climb. You will not be allowed to climb if you register a BAC level above 0.05.

Wear sneakers or other comfortable shoes with a good grip.

All climbers receive one group photo but additional photos of your climb are available for purchase. It is not possible to take your own cameras or devices on the climb. Inhalers and other medications may be taken on the climb.

Pregnant women may climb when up to 24 weeks pregnant as long as they have a doctor’s note giving permission.

Thanks to BridgeClimb Sydney for providing me with a complimentary climb. While my experience was complimentary, the opinions expressed here are my own and honest, as usual.