There is something about New York City that never ceases to awe and amaze us. Is it the grandiose scale? The street life? Its “state of mind”? Whatever it is, this city knows how to charm us and get our attention.

New York City’s skyline is one of the most famous and is well recognized around the world. But, what makes it so special?

I might say that the variety of architectural styles and shapes play a big role in its uniqueness that can spark interest in anyone, from travelers to architectural enthusiasts.

If you want to see some of the most important building in the Big Apple, here are 17 buildings you shouldn’t miss when visiting New York City:

St. Patrick’s Cathedral is the largest decorated Neo-Gothic-style Catholic Cathedral in North America and has been recognized throughout its history as a center of Catholic life in the United States. It is the seat of the archbishop of the Roman Catholic Archdiocese of New York.

This Cathedral is located on Fifth Avenue between 50th and 51st St. It faces Rockefeller Center, another building complex worth visiting.

The Solomon R. Guggenheim Museum is a modern art museum located on the Upper East Side at 1071 Fifth Avenue by 88th St.  It is one of the best-known museums in New York City, and even the world, thanks to its unique design.

The distinctive building, designed by Frank Lloyd Wright, looks like a white ribbon curled into a cylindrical stack that is slightly wider at the top than at the bottom. Its appearance is in sharp contrast to the more typically “boxy” Manhattan buildings that surround it.

On the interior, the viewing gallery forms a gentle spiral from the ground level up to the top of the building.

The Metropolitan Museum of Art

The Metropolitan Museum of Art, also known as “The Met”, is one of the world’s largest and most important art museums. From ancient Egyptian to Greek and Roman art, and expanding to European and American art of the early 20th century, this museum has it all. It is thanks to museums like the MET why New York is one of the best places to visit in the USA.

The main building is located on the eastern edge of Central Park on 5th Avenue at 82nd St., along what is known as Museum Mile. It was designated a National Historic Landmark in 1986.

Its name is derived from the nickname for the state of New York, The Empire State. It stood as the world’s tallest building for more than forty years, from its completion in 1931 until construction of the World Trade Center’s North Tower was completed in 1972.

Following the destruction of the World Trade Center in 2001, the Empire State Building became for the second time, the tallest building in New York City.

The Plaza Hotel, considered as one of New York City’s finest hotels, was designed imitating the style of a late medieval French chateau. This hotel brought the elegance that today characterizes Fifth Avenue.

The elegant lobby contains ornamented archways, pillars, and marble floors. This, combined with a usage of the color gold, gives the hotel a wealthy upper-class appearance.  The hotel is located at Grand Army Plaza, Fifth Avenue at 59th St.

The Woolworth Building is an early Gothic revival skyscraper built with massively scaled gothic detailing that are able to be read from street level several hundred feet below.

Counting with 57 stories, the Woolworth Building is one of the oldest –and one of the most famous– skyscrapers in New York City.

The Chrysler Building is an Art Deco skyscraper located on the east side of Manhattan at the intersection of 42nd Street and Lexington Avenue. Standing at 319 m (1,047 ft) high, it was briefly the world’s tallest building before it was surpassed by the Empire State Building in 1931. 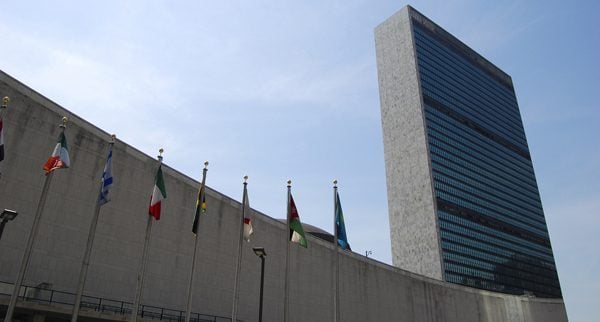 Though it is in New York City, the land occupied by the United Nations Headquarters is considered international territory, and its borders are First Avenue west, East 42nd Street South, East 48th Street north and the East River east.

TWA Flight Center was the original name for the Eero Saarinen designed Terminal 5 at Idlewild Airport, which was later renamed John F. Kennedy International Airport. The terminal has a futuristic design with the shape of a bird setting flight.

The interior has wide glass windows that once opened onto parked TWA jets. Today, this terminal serves as a hotel, and the best part is that it kept its unique design.

The Lincoln Center for the Performing Arts is a 16.3-acre complex of buildings located at Columbus Ave. by 63rd Street.

It is the home for 12 arts organizations (music, film, dance, opera…), considered among the most prestigious in the world. Its open spaces –surrounded by a series of classical, conservative travertine buildings– are great for public activities and free concerts during the summer. 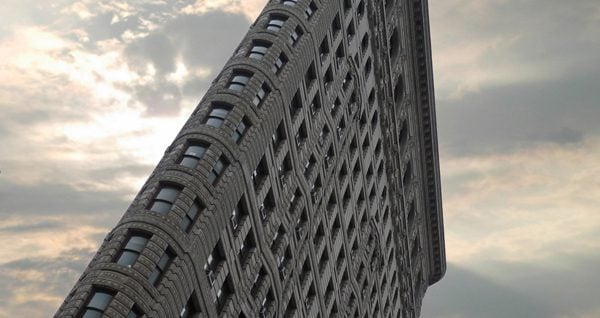 The Fuller Building, better known as the Flatiron Building, was one of the tallest buildings in New York City upon its completion in 1902.

The building sits on a triangular island block at 23rd Street, between Fifth Avenue and Broadway. The triangular block is what gives it its iconic flat and lean shape. 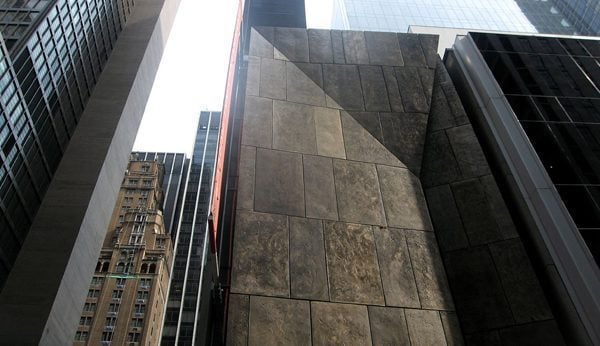 This extremely small museum, located at 45W 53rd Street and designed by Tod William Billie Tsien Architects, is not well known even among many Newyorkers.

But what this building lacks in size, it makes up in great design. Its melted copper façade represents much of the crude folk art exhibited inside.

The intimate areas reflect the domestic scale of much of the museum’s collection, allowing for a personalized art experience. Open galleries feature spaces for the display of larger, more dramatic works. 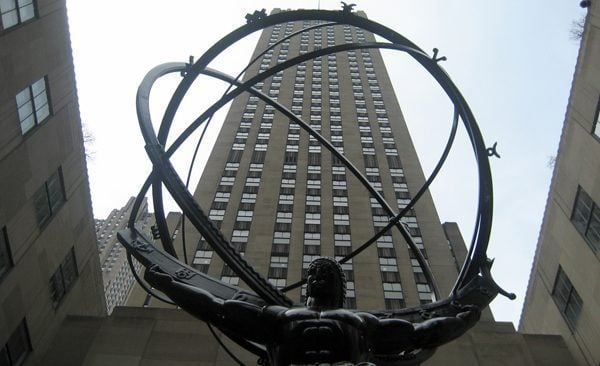 The Rockefeller Center is not just a building; it is a complex of 19 buildings covering 22 acres between 48th and 51st streets, by 5th Avenue. It’s main building, known as “30 Rock”, counts with 70 stories topped by an observation deck (in my opinion the best view of the city).

Here you will also see the Radio City Music Hall, NBC Studios, the famous Skating Rink, and a variety of stores.  It was declared a National Historic Landmark in 1987. 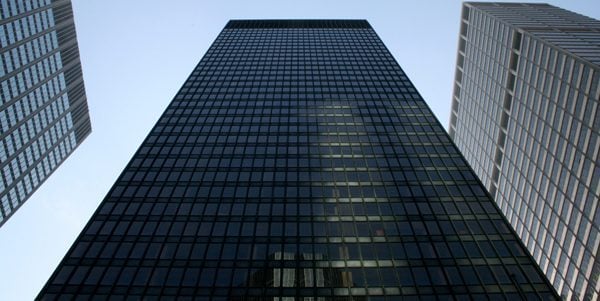 The Seagram Building is a skyscraper located at 375 Park Avenue.  Designed by Ludwig Mies van der Rohe, in collaboration with Philip Johnson, the building was completed in 1958 and stands a total of 38th stories.

Often copied but never matched, the Seagram Building is generally recognized as the finest example of skyscrapers in the International Style.

Much of the building’s success comes from its elegant proportions and its relation to the overall site. This building was the first with floor-to-ceiling windows. 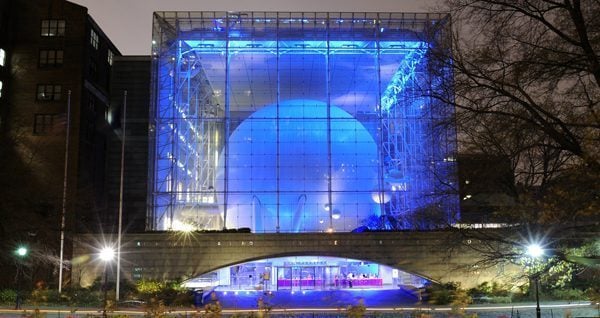 Want to know how much you weight in Mars? Then the planetarium at the American Museum of Natural History is your place to go.

It is located at Central Park West at 79th Street and was designed by James Stewart Polshek. The illuminated 87-foot diameter sphere –which appears to be floating in a huge glass cube– houses the Hayden Planetarium and Space Theater. 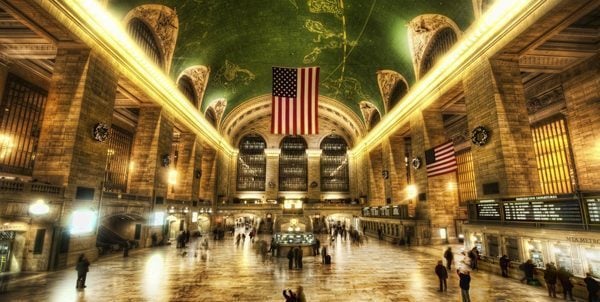 Free tours are sponsored by the Municipal Arts Society every Wednesdays at 12:30 p.m., starting at the main concourse.  It is located at 42nd Street and Park Ave. 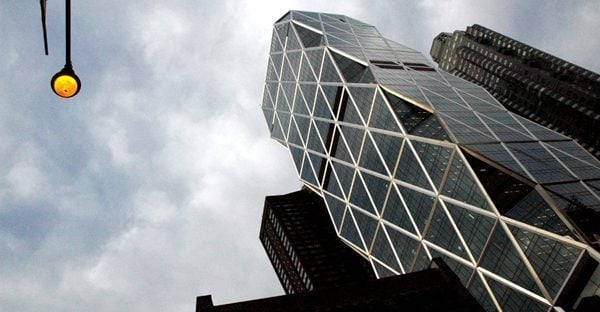 Designed by Sir Norman Foster, this 42-story tower was built atop the original six-story home of the Hearst media empire.

Its façade has a diagonal grid with no vertical supporting columns, making this sleek design unique in the world. It is located at 951-969 Eighth Ave. by 56th Street.

In addition to these buildings previously mentioned, New York City offers so many other architectural highlights that are also worth visiting.

I recommend you walk freely through the city blocks, which is the best way to discover and appreciate this city’s architecture.