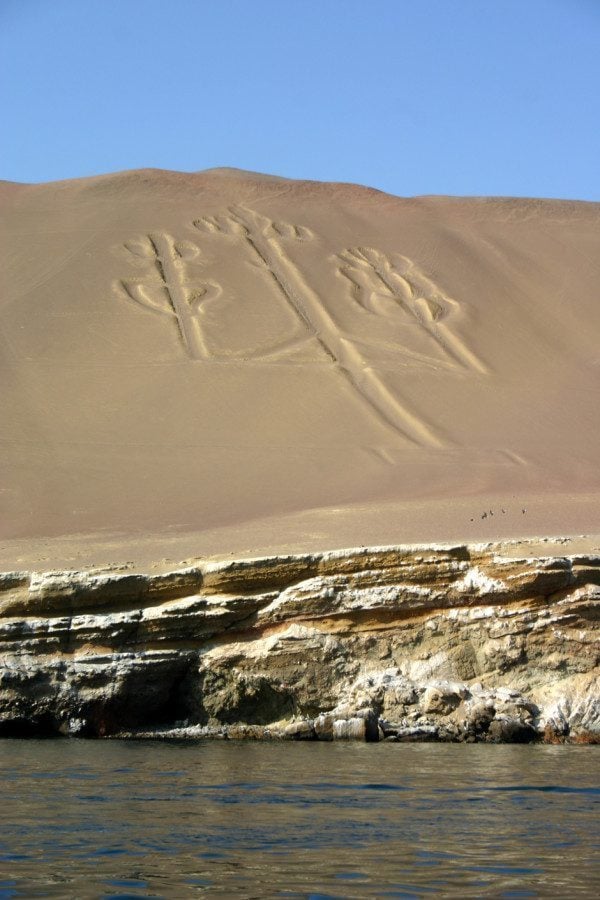 In Paracas lies the Candelabra or “Candelabro“, a giant figure etched into a desert sandy hill, similar to the Nazca Lines.  It is assumed that the Paracas people, who formed a well-developed culture from about 1300 BC until 200 AD –long before the time of the Inca civilization– did this figure.

The reason behind the famous candelabra carving is unknown, but one of the theories states that this mysterious and enigmatic symbol was used as a nautical guide –several centuries ago– to help ships find or avoid the bay.   But in the end, we’re still not sure who made this drawing or what does it means.

This figure is 50 meters long and is carved up to 2 meters deep into the sandy slope of a cliff overlooking the sea.  The lines have endured the pass of time, overcoming erosion by wind and water, due to the fact that the candelabra was carved onto a hill where the shape of the hill pushes the wind up and over the lines, never directly against the lines. Plus, small amounts of minerals from the ocean water fall into the candelabra, which hardens it.

The best way to see this figure is by taking the boat ride to Ballestas Island, just a couple miles off the Paracas shore.

Even though it is famously known as the candelabra, there is a possibility this drawing represents a cactus.

What do you say, does it looks more like a candelabra or a cactus?